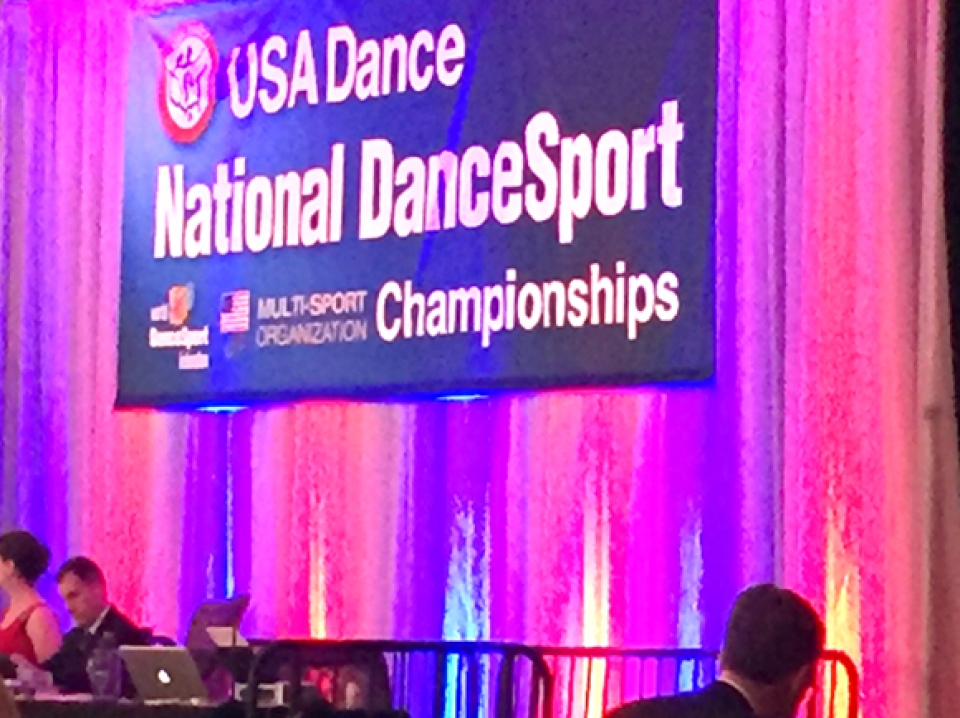 The USA Dance Nationals progressed into its 2nd day yesterday. The daytime sessions were filled with adult and junior medalist divisions and in the evening we progressed to the championship levels.

View the embedded image gallery online at:
http://dancebeat.com/m-blogs-en/item/1161-usadancenationals2016#sigProId9d51438d57
Headline event was the Adult Open Latin with the top two couples eligible to represent the USA in the upcoming WDSF World Championship. This year’s winners were Kiki Nyemchek & Magda Fialek (NJ). We thought they were well clear showing the most mature style of all the finalists and they did win all dances and had the majority of 1st palces in 3 dances. We were a little surprised that they had to share as many 1st places as they did, however, the runners-up, Ryan Raffloer & Hanna Sverdlov (NY), building on their multi successes from the day before, danced very well today, we thought. I just wish they would look at each other occasionally! They were 2nd in all 5 dances. The most unorthodox couple in the final placed 3rd in all dances, Alexey Sorokin & Sasha Nissengolts. We liked some of their work a lot, it showed much passion and soul, but the judges scored them from 1st to 6th over the 5 dances. With 4,4,4,6,4 Eric Groysman & Dakota Pizzi were 4th. They are an attractive couple with a lot of potential, but for us their style is a little over the top with no light and shade. The audience seemed to enjoy them. Samuel Hacke & Katerina Hermanova were 5th with 5,5,5,4,5 and Danya Rubashevsky & Anastasiya Visotskaya were 6th in all dances.  Nadezda Vlasova, last year's champion now dancing professionally was on hand to help with the presentation.

The turn out for the Open Latin was a little disappointing with only a semifinal fielded.

View the embedded image gallery online at:
http://dancebeat.com/m-blogs-en/item/1161-usadancenationals2016#sigProId37de048c9f
The largest event of the night was the Youth Latin and that began with a quarterfinal in the afternoon. It resulted in the 2nd win of the championships for Mike Monokandilos & Sophia Brodsky (CA) who easily won all 5 dances with a huge majority of 1st places. After that the positioning was more fluid and no couple received a majority of “2nd or better” scores in any dance. However, 2nd place went to Murat Medzhidov & Valerie Dubinsky (MA) 2,3,2,2,2. This has been a good championship for this couple, generally I find them stronger in the Standard, but their Latin received high marks this weekend. A new couple to us, Joshua Lishnevetsky & Angela Gerzberg were 3rd 4,2,3,3,3. This young man has bags of talent and appears very relaxed. The lady needs to work some on the technical aspects but has tremendous potential also. Definitely a couple to watch. We were quite surprised with the 4th place finish of Yusif Amsatr & Naomi Spektor 3,4,4,4,4. We were expecting them to be as high as 2nd, but the judges disagreed. Matthew Kheyfets & Alexandra Dachenko were 5th 5,5,6,5,5 and Lance Yasinsky & Annabelle Vinokur were 6th 6,6,5,6,6.
View the embedded image gallery online at:
http://dancebeat.com/m-blogs-en/item/1161-usadancenationals2016#sigProId93c627fafa
The Open Amateur Standard dances were on display again tonight, but this time in the WDSF Open Standard. Once again it was an easy win for Earle Willamson & Charlotte Christiansen who won all dances, although mysteriously at least to us, they lost 1 or 2 first places in each dance. This event saw the highest ranking achieved so far by a non-USA couple. Valeriu Ursache & Marika Odikadze from Israel were 2nd 2,2,2,2,3. They received the majority of “2nd or better” scores in the first 2 dances. Their style was certainly less aggressive than the winners’. Taking 3rd tonight were Fernando Lareu & Nicole Palagashvili 3,3,3,3,2. They took that 2nd in QS and also had more 2nd places than Valeriu & Marika in VW and FT, but never the majority, so it was an unlucky day for them. With all the 4’s Florin Vlad & Natalia Linda O’Connor were 4th. Samuel Hacke & Katerina Hermanova were 5th in all and Danill Vesnovskiy & Emily Thorpe were 6th in all.

The U/21 Standard was unfortunately a straight final of only 3 couples. Justin Lin & Sasha Dubinsky (MA) were the easy winners in all dances. Samuel & Katarina were 2nd in all and 3rd went to Robert Guitelman & Klinta Smite were 3rd.

From Baltimore to the World!

This weekend sees the USA Dance National Championships, being held once again in the Renaissance Hotel in downtown Baltimore. One of the primary purposes of these national championships is to select representatives to the WDSF World Championships for the coming year.

Reps are selected from Junior categories all the way up to Senior, in fact USA Dance are giving $85,000 this year to cover their reps costs. Unlike in the WDC Amateur League where entry for the world championships is open for all divisions at the Paris event in December, WDSF World Championships are still closed and this is the only way to qualify.

View the embedded image gallery online at:
http://dancebeat.com/m-blogs-en/item/1161-usadancenationals2016#sigProId65c3f46cf0
The headline event for me last night was the Amateur Adult Standard and the two US reps, placing first and second respectively, are Earle Williamson & Charlotte Christiansen (CA) and Fernando Lareu & Nicole Palagashvilli (MA). Earle & Charlotte were the overwhelming winners receiving 12 out of 13 first placements in all 4 dances and 11 in foxtrot. The only judge to dissent on their 1st place was Phillip Stevens who scored them 2,2,2,1,2. Judge Ronen Zinshtein placed them 2nd in foxtrot. We thought they gave a supremely confident performance of an athletic style. It would be very interesting to see them compete against the NDCA/ABC champions. For Fernando & Nicole it was a little tougher race. They placed 2,2,2,3,2 but did not have a majority of 2nd places in any dance. Their closest rivals were Florin Vlad & Natalia Linda O’Connor with 3,3,3,2,3. Incidentally, Florin & Natalia were finalists last month in the NDCA/ABC US Championships, the only couple to make the final in both. Samuel Hacke & Katerina Hermanova were 4th in all dances and incidentally received Phillip Stevens 4 first places. Danya Rubashevsky & Anastasiya Visotskaya were 5th 5,6,5,5,6 and Roman Nagibin & Daria Kotenko were 6th 6,5,6,6,5.

We must say we enjoyed the Viennese Waltz with the variations in rhythms and choreography allowed by the WDSF. Too often VW is the time to freshen your drink or get a cup of coffee. Surely this has to be the way of the future?

View the embedded image gallery online at:
http://dancebeat.com/m-blogs-en/item/1161-usadancenationals2016#sigProIdfc6c0d9abe
The Senior I Standard was also decided last night and the representatives were selected for the World Championship that will this year be held in Boston, MA, the first time the US has hosted a Senior WDSF World Championship. The Champions tonight winning all dances were Thomas Yim & Kelly Cheng (CA). They certainly showed the most athletic dancing in the final and we thought were worthy winners. Past champions, Xingmin & Katerina Lu (NY), were the runner-up tonight, again in all dances. For us these are more classic dancers and it was a close decision. With 4,3,3,4,3, Sidney Peng & Jamie Liu were 3rd; 4th Thomas Yu & Yuko Naulani Yu 3,4,4,3,4; 5th Ron Souers & Susan Hang 6,5,6,5,4; 6th Gokturk & Asli Yurtyapan 5,6,5,6,5.
View the embedded image gallery online at:
http://dancebeat.com/m-blogs-en/item/1161-usadancenationals2016#sigProId3c49d60d99
One of the best events of the night was the Youth 10-Dance. The WDSF scores these events as “10-dance” events not individually by dance as does the WDC. Winning tonight were Mike Monokandilos & Sophia Brodsky (CA). They won all the Latin dances and scored 1,2,3,2,3 in the Standard. The runners-up, and obviously very delighted were Murat Medzhidov & Valerie Dubinsky (MA). Although they did not win any dances, their average scores kept them always in the top 3 in all 10 dances. Yusif Amsatr & Naomi Spektor were 3rd. They scored 4th in all the Standard dances but were either 2nd or 3rd in all the Latin. The winners of 4 of the Standard dances, Kinsley Lin & Michelle Yiu were 4th – probably a disappointing result for them. They finished either 5th or 6th in all the Latin dances and received 3rd in waltz. A 1st place in waltz would have tied them with Yusif & Naomi. Matthew Kheyfets & Alexandra Dacheko were 5th and Robert Guitelman & Klinta Smite were 6th.
View the embedded image gallery online at:
http://dancebeat.com/m-blogs-en/item/1161-usadancenationals2016#sigProIde9c71bb2bb
Ryan Raffloer & Hanna Sveridov (NY) had a very successful night. Their first victory came in the U/21 Latin where they won all dances and had the majority of 1st places in all. 2nd went to another busy couple, Samuel Hacke & Katerina Hermanova (NJ) and they were also 2nd in all dances. 3rd were Lance Yasinsky & Annabelle Vinokur, again in all dances. 4th Robert Guitelman & Klinta Smite 4,4,4,4,5; 5th Anthony Mancuso & Rachel Privler 5,6,5,5,4; 6th Mark Irgang & Sabrina Isakow 6,5,6,6,6. Disappointingly this event was a straight final.

This year the USA Dance Nationals is holding some WDSF Open events and we saw two of those last night – WDSF Open Adult Latin and WDSF Open Senior I Latin. All the Senior couple were from the USA, but we saw couple from Canada and Equador in the Adult Latin.