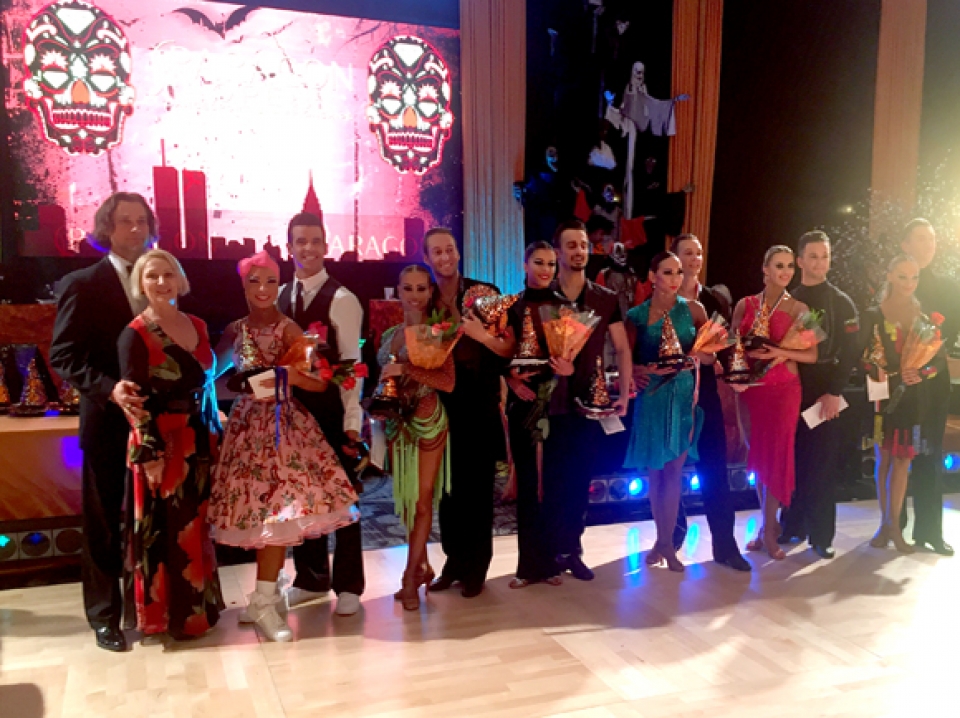 The last night at Paragon Open was a very festive celebration of “Halloween” and ballroom dancing.

View the embedded image gallery online at:
http://dancebeat.com/m-blogs-en/item/1508-paragon17#sigProId5642b76a81
The two featured events of the night were the Professional Rhythm and the Professional Ballroom. Also featured was the conclusion of the Professional Rhythm Trifecta, sponsored by Arthur Murray International, that came to a close last night. However, a huge treat was the amount of participation from the officials and the organizing team, everyone was in full costume and in great party mode as you will see in the pictures posted.
View the embedded image gallery online at:
http://dancebeat.com/m-blogs-en/item/1508-paragon17#sigProId39a935514d
The Professional Rhythm was well attended with a full semifinal round. 6 couples were called for the final and here Vard Margaryan & Inga Demetryan took first in all dances. Second overall was awarded to Dmitry & Olena Nikishkin who placed second in four dances and third in the mambo. Third overall went to Aaron & Irina DeSoto, placing third in four dances and second in the mambo. Ilya Abdullin & Tara Barakov placed fourth 4,5,4,4,5, Alberto Cortes & Jessa Mae Briones were fifth 5,4,6,5,4, and sixth was Andrew Escolme & Amy Baker 6,6,5,6,6.
View the embedded image gallery online at:
http://dancebeat.com/m-blogs-en/item/1508-paragon17#sigProId35ea7f09eb
As we mentioned earlier, this was also the finale for the Rhythm Trifecta, a series that rewards Rhythm professional competitors for their Open competition placements and also for their pro/am participation with students. The three competitions for this Rhythm Trifecta were Embassy Ball, The DBDC and Paragon. The big winner taking $6,000.00 home were Marcio Desouza & Nighi Tran. Second overall went to Andrew Escolme & Amy Baker who took home $5,000.00 and third with $4,000.00 went to Vard Margaryan & Inga Demetryan. Fourth in this Trifecta was awarded to Dmitry & Olena Nikishkin and they took $2,500.00. There was no sixth place, there was a tie for fifth between Alberto Cortez & Jessa Mae Briones and Matt Hauer & Anastasia and so we combined their money and divided it equally and so each couple took $1,250.00.
View the embedded image gallery online at:
http://dancebeat.com/m-blogs-en/item/1508-paragon17#sigProId88a8cee88b
The Professional Ballroom also started with a semifinal round and here Iaroslav & Liliia Bieliei won all dances. Oscar Pedrinelli & Lenka Kovalcikova placed second in all dances and third went to Mechyslav Pavlyuk & Gemma Arnold and they took third in all dances. Fourth in all dances went to Dmitriy Solomakha & Gabriela Sevillano, fifth were Pavel Bic & Ersi Nie with these marks 5,6,6,5,5, and sixth were Manuel Trillo & Tatyana Larina 6,5,5,6,6.

Saturday evening came to a close with a lavish after party complete with a musician and a lavish buffet. The special dessert of shakes and donuts from a dessert vehicle parked outside the party were supper "delish," giving it a very special and interesting touch.

View the embedded image gallery online at:
http://dancebeat.com/m-blogs-en/item/1508-paragon17#sigProIdf3e22ba438
Today we look forward to a packed day of junior competitions. We leave you with a few more pictures from some of the judges.

Here at the Paragon Open Championships, the competition goes hand in hand with Halloween and so the entire ballroom, including the gigantic screen in the middle, is decorated with this motive, even the prize presentations are part of the décor.

All wining couples took a “witch’s hat” full of chocolate!

However, last night it was serious business when it came to the dance competition, there were at least four events that were terrific, but both the Professional and the Amateur Latin were as delicious as the chocolate in the witch’s hat!

View the embedded image gallery online at:
http://dancebeat.com/m-blogs-en/item/1508-paragon17#sigProIdfd745b3432
The biggest event with a full quarter-final round was the Amateur Latin, but this was not what really made the event great it was the quality of the couples present that made it total worth it. Tal Livshitz & Ilana Ksesselman stole the show by winning all dances and for many of us were clear winners, with everyone else following behind. Pasha Stepanchuk & Gabrielle Sabler placed second with these marks - 2,2,3,2,2. Alexander Chermositov & Irina Grishania took third 3,3,2,3,3, and Ewoud Fidon & Malanie Weiler took all fourth places. From here down it got a little more murky; Allen Rudman & Svitanta Lisna placed fifth 5,5,6,6,5, and Andriy & Amanda Besyedin were sixth 6,6,5,5,6.
View the embedded image gallery online at:
http://dancebeat.com/m-blogs-en/item/1508-paragon17#sigProIdb224cfc89a
The Professional Latin was fantastic with six very strong couples and in this competition the clear winners were Mykhailo Bilopukhov & Anastasiia Shchypilina who won all dances. Second place was awarded to Pasha Pashkov & Danielle Karagach 2,3,2,2,2, leaving Artur Tarnavskyy & Anastasia Danilova holding third 3,2,3,3,3. Fourth in this competition was also clear with Nikita Malakhov & Nadezda Vlasova taking fourth place in all dances. Fifth were Vlad Astafiev & Annie He Xiao 5,6,5,5,5, and in sixth place were Tykhon Zhyukov & Yana Yaraslavska 6,5,6,6,6.
View the embedded image gallery online at:
http://dancebeat.com/m-blogs-en/item/1508-paragon17#sigProId63b823e0e0
The Latin was great but the “witching hour” feature event was the professional Smooth that was almost magical. Crowned US Champions Nick Cheremukin & Viktorija won the event as easily as waving a wand, with first in every dance! Second and third was a little more contested. Travis & Jaimee Tuft placed second in three dances giving them a second position overall, but continue to have a hard time with the Tango where they placed third. Second in the tango but third overall were Max Sinista & Tatiana Seliverstova, however, this trio up on the top alone really made this a great final. Fourth place with a “Rule 11” was awarded to Enzo Zappia & Stephanie Betts with these marks 4,5,4,5, and fifth place with this “Rule 11” decision was awarded to Ilya Abdullin & Tara Barakov 5,4,5,4. Clearly in sixth position was Aaron Talbert & Maggie Toth placing sixth in all dances.
View the embedded image gallery online at:
http://dancebeat.com/m-blogs-en/item/1508-paragon17#sigProId668a2d589d
The Amateur Ballroom Championship was a 7-couple final and this competition went to Samuel Hacke & Katerina Hermanova placing first in all dances. Second in all dances were Oleksandr Kalenyuk & Olena Abltson, and third position in all dances was awarded to Casey & Kayci Treu. Fourth were Simon Richard & Adriana Izzo from Canada 4,4,5,4,4; fifth went to Kevin Lu & Yun-Ha Huang 5,5,4,5,5; sixth was awarded to Xingmin & Katerina Lu 6,6,7,6,7, and in seventh position were Matthew Harkins & Shannon Julian 7,7,6,7,6.

This competition also featured the Paragon Open Amateur “Best of the Best” as well as the Professional Cabaret last night and although it was great made it the evening a little long for many of us old judges!! Having said this we thought many of the numbers in both the amateur and the Professional were brilliant. In the professional Cabaret top spot went to Travis & Jaimee Tuft with their now well-known number “Nature Boy.” Second were Mykhailo Azarov & Tetyana Makarenko doing the well known “Daly” number and third were Pasha Pashkov & Danielle Karagach who gave a very “deep” and “heart felt” performance of a lady that loses her life in a car crash, this performance was so emotional and sad that, Danielle when she walked off the floor could not hold her real tears and was spotted crying from afar!

View the embedded image gallery online at:
http://dancebeat.com/m-blogs-en/item/1508-paragon17#sigProId47b82c3326
The Amateur “Best Of the Best” was also great and here the win wen to Pasha Stepanchuk & Gabriella Sabler who did a playful samba where they characterized many of the drum jungle sounds of Brazil with their bodies (Picture poses)and finished with an actual samba performance. Alexander Chermositov & Arina Grishanina placed second and they did a cute cha cha wearing “wolf” masks to the “thriller” song, we though it was very appropriate with the décor with a slight comic relief. Third went to Tal Livshits & Ilana Kesselman with a very interesting Jive or “swing thing,” some of the steps were quite clever.