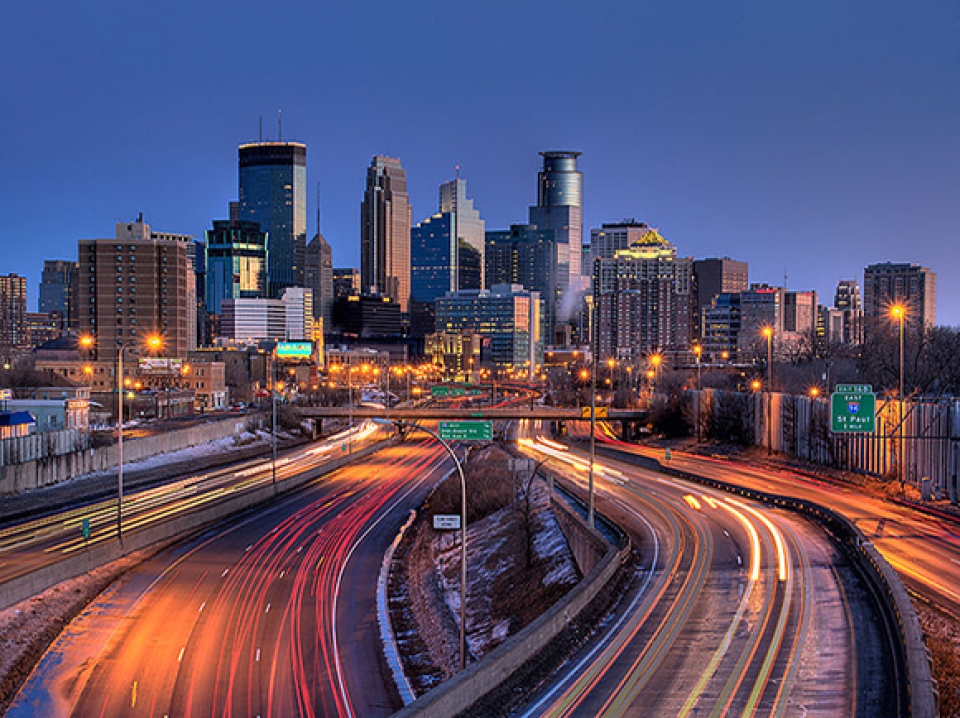 The American style continued to be a great feature at the Twin Cities Open Championships, with great attendance and very good couples.

The Smooth in particular was excellent where they asked for the judges to call back seven couples and 8 were called back.

View the embedded image gallery online at:
http://dancebeat.com/m-blogs-en/item/1776-tco2019?tmpl=component&print=1#sigProId8214559ca6
The presumed winners of the Smooth, Igor Afonkin & Meghan Anderson won all dances with perfect scores from all judges, this was their home territory and so the audience was really pulling for them but it was not needed, they were by far the best on the floor in clarity as well as choreography. Second went to Jason Rivers & Jennifer Davis but here things were not as clear. They did win with a majority of seconds, but at times the work seems to overpower their knowledge and expectations. For us and for some of the judges, Martin Pickering & Natalie Botes could have been an easy choice for this position as well and they did take a number of seconds from Jason & Jennifer on the judges’ scorecards. They also were a favorite couple, you could hear the audience cheering for them when called.
View the embedded image gallery online at:
http://dancebeat.com/m-blogs-en/item/1776-tco2019?tmpl=component&print=1#sigProId635812f6dc
From fourth place down things got a little murkier in this Smooth competition. For us it was a competition between Nick Hacklin & Sarah Ford and Jay Morth & Samantha Trinidad; and yes Nick & Sarah did place fourth but on their scorecard we saw a variety of marks, from second to sixth placed and even a seventh in their foxtrot from Edward Simon. The same basically you could see in Jay & Samantha’s column with a few more sevenths in a number of dances.
View the embedded image gallery online at:
http://dancebeat.com/m-blogs-en/item/1776-tco2019?tmpl=component&print=1#sigProId76bb0ff307
We must also point out that Nick Hacklin & Sarah Ford also entered the professional Cabaret later and they took second place in this venture to Zachary Pohl & Ariel Freilich who did a terrific Cabaret routine with a number of difficult maneuvers. It is almost a shame that these two competed with one another because Nick & Sarah do a terrific Showdance routine with few if any lifts, while Zahcary & Ariel do more lift work, so it is almost comparing apples and oranges. We must point out now that Zachary & Ariel won nearly with perfect scores with only one judge, Edward Simon, awarding them a second place in this style.

The further we got from the top three the more variations in marks we got from the judges in this open professional Smooth as you will see by the final tally of the scores. Christopher Wayne & Mallory Evan took sixth with this marks 6,6,7,6; Antonio Nunez & Ksenia Kaskina were seventh 7,7,6,7 and eighth place in all dances was awarded to Dustin Donelan & Georgiatta Anderson.

View the embedded image gallery online at:
http://dancebeat.com/m-blogs-en/item/1776-tco2019?tmpl=component&print=1#sigProId8c9ccdbffb
In the Professional Rhythm the judges were asked to call back 7 couples and this time they were on the money. Here also the presumed winners, Andre & Natalie Parmonov, won three dances with a majority of firsts from the judges and had perfect scores in the bolero. There was only a handfull of judges that awarded them less than first, Didio Barrera who awarded them 2,1,3,1,3, Larinda McRaven who awarded them a second in the rumba and a second in the swing, and Donald Johnson who also awarded them a second in the swing, and David Nyemchek who followed suit.
View the embedded image gallery online at:
http://dancebeat.com/m-blogs-en/item/1776-tco2019?tmpl=component&print=1#sigProId8447adef42
Second in all dances was awarded to Dmitry & Olena Nikishkin who took nearly all firsts missing in the Paramonovs’ column, and we have to say that their performance was excellent. Dmitry & Olena usually have a performance full of power and energy, but on this outing we have to agree with the judges that awarded them some of the first places, there seemed to be a slightly different approach, one that had a lot more soul than energy and sweat. We must also point out, Ilya Velednitsky & Mariya Ilchenko, who also put on a good performance, especially in the swing where we for sure thought they might win this dance. Unfortunately for them, they were only able to steal one first in this dance from the Paramonovs awarded to them by Mr. Barrera, but they did mange to get a few more seconds away from the Nikishkins.

Another couples that had a great evening was Toshko Kondov & Kristen Dobson who placed fourth in all dances. We thought their performance was very correct, with great body isolation from both in all dances. Fifth was awarded to Senzo Makhaye & Agnieska Strojek in all dances, Antonio Nunes & Ksenia Kashkina placed sixth, and seventh in all went to Nicolas Rodriguez & Paulina Struk.

View the embedded image gallery online at:
http://dancebeat.com/m-blogs-en/item/1776-tco2019?tmpl=component&print=1#sigProId984e64dc90
The Open Professional Ballroom was a repeat from the night before in the Rising Stars - Aleksei Minaev & Elena Minaeva placed first in all dances with perfect scores in all dances. Second in every dance and also from every judge went to Jason Rivers & Jennifer Davis, and third in all was awarded to Michael Hughes & Keely Brown. The Professional Latin was also a repeat and here Oleksandr Kozhukhar & Rachel Sayotovich were first in all dances and the Minaevs were 2nd.
View the embedded image gallery online at:
http://dancebeat.com/m-blogs-en/item/1776-tco2019?tmpl=component&print=1#sigProIddb3e696b0d
The theme of this last night at the Twin Cities Open was Rock Stars and Music. All couples that won were asked to do an honor dance and they did. We also saw some interesting modern dance numbers from a couple of groups and the judges got the chance to “Rock it Out” and wear an outfit from their favorite rock band or figure. Some were quite interesting to say the least, but all in great fun.

Our congratulations to Scott and Amy Anderson for putting on such a terrific competition for us to enjoy.

A Tale of Two Cities!

The Twin Cities Open Championships are here once again and last night was all about the Professional Rising Stars.

View the embedded image gallery online at:
http://dancebeat.com/m-blogs-en/item/1776-tco2019?tmpl=component&print=1#sigProIdab21c49ff4
The most populated and exciting categories were the American Styles where full semifinal rounds were run. The Smooth was won by Igor Afonkin & Meghan Anderson and the Rhythm by Senzo Makhayen & Agnieszkay Strojek.

For those that follow the Smooth and Rhythm categories around the USA, second in the Professional Rising Star Smooth were Jason Rivers & Jennifer Davis and they took second in all dances. Third was Martin Pickering & Natalie Botes and they took third in all.

View the embedded image gallery online at:
http://dancebeat.com/m-blogs-en/item/1776-tco2019?tmpl=component&print=1#sigProIdf6682d18f2
In the Rhythm Rising Star second was awarded to Antonio Nunez & Ksenia Kashkina who took all seconds and third was awarded to Slash Sharan w/ Rebecca Vincitore who took all thirds.
View the embedded image gallery online at:
http://dancebeat.com/m-blogs-en/item/1776-tco2019?tmpl=component&print=1#sigProId7eb3677559
In the Professional Rising Stars Ballroom the winners were Aleksei Minaev & Elena Minaeva and in the Rising Star Latin the win wen to Oleksandr Kozhukhar & Rachel Sayotovich.

Tonight the Open events will be held and we will bring it all to you tomorrow. The venue here at the Twin Cities Open Championships is excellent with a great convention center space below the Hyatt Regency giving the competitors access to many of the ammenities in this excellent venue.