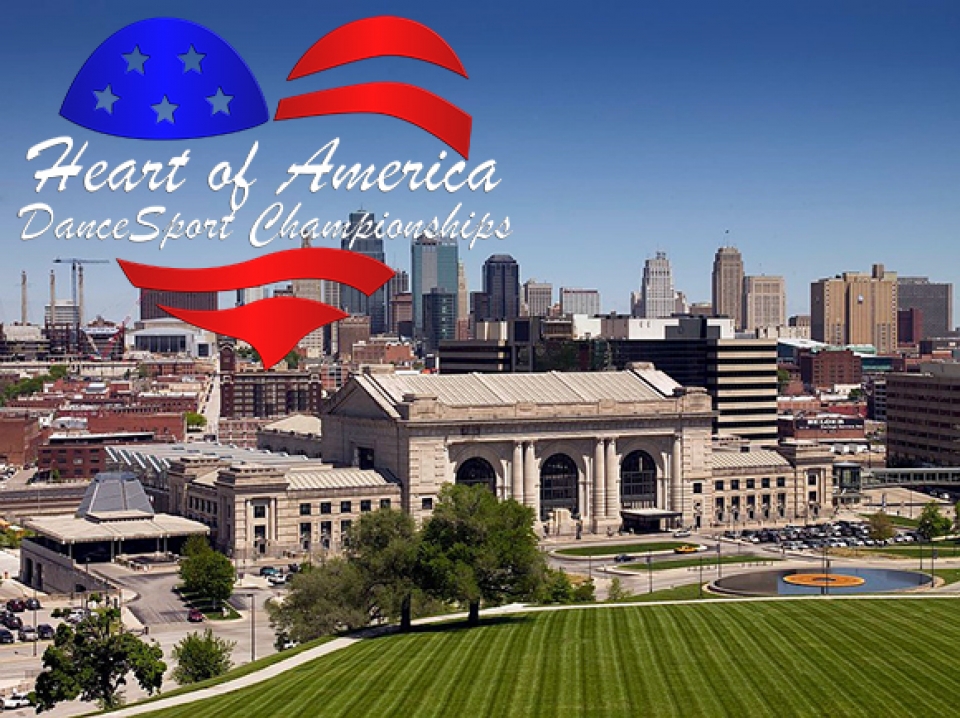 We Are Not in Kansas Anymore!

Although we are not in Kansas any more we must say that we truly enjoyed the city of Kansas City and the Heart Of America Championships.

Everything was easy and convenient to get to including some excellent eating and walks around the town. Many of the attendees use the scooters to get around the town and we would have done so as well, except we thought about our ages and figured it is better and easier to walk, but many had a wonderful time going to the market and the many places around to visit and be entertained and eat.

View the embedded image gallery online at:
http://dancebeat.com/m-blogs-en/item/1787-hoa2019?tmpl=component&print=1#sigProId75b77fbc30
The last night of competition was excellent in particular in the American style, but even in the international style we had some interesting surprises we will mention later on. The best and most exciting event for us was the Professional Smooth, with some great couples in attendance making the judges sweat as they worked hard to sort them out. Before we go on we must also point out that not one of the dances was won with a majority of firsts. The overall winners, Igor Afonkin & Megan Anderson, were the closest to a majority with seven first place marks in the waltzes and foxtrot, the dances they won; but they were not close to the majority for the tango, in fact they lost the tango to the second placed awardees, Mariusz Zarkrzewski & Lynnsay Ray.
View the embedded image gallery online at:
http://dancebeat.com/m-blogs-en/item/1787-hoa2019?tmpl=component&print=1#sigProId2e9ca1b0b9
The fight between first and second for us was closer than if you look at the marks. Igor & Megan had for us an advantage in both their waltzes as well as they are more of a recognizable couple on this side of the USA. Mariusz & Lynnsay in our opinion and that of what we see going around the country tend to stay closer to home - the west coast, and it might be us, but we rarely see them on the east coast. Mariusz & Lynnsay also got a little tangled up in the final and their waltzes seemed to fizzle in the end. As you can see by the placements their waltzes and even their foxtrot was not only not recognized but in fact a little disliked by the judges who marked them third in the foxtrot and Viennese Waltz. We actually thought they were quite good in the last T,F,VW but we can understand the judges they had a hard final to sort considering that also in the mix were Tykhon & Yana Zhyvkov who placed third overall 3,3,2,2 and possibly stole some of the light and thunder from the other two couples just mentioned.

We must point out that Tykhon & Yana are very hard to miss on the dance floor, unlike in the Latin, they really grab your attention from the start. For us this is a good thing and a bad thing, speaking to some of the officials afterwards some of them felt that they are a little too hard for the style and with the exception of the foxtrot where their “jazzy” and sexy approach we can understand the dissenting concerns. Fourth overall went to Sergei Shapoval & Mila Popovich who took fourth in every dance. In the semifinal we are sure we were not the only ones thinking they might even win the competition, but once in the final it was hard to appreciate their work due to many bumps and grinds with other couples. It is a shame because as we mentioned they looked amazing in the semifinal. Two more couples made this final Joe Nugent & Kila Liu who took all fifths and Jason Rivers & Jennifer Davis who took all sixths.

View the embedded image gallery online at:
http://dancebeat.com/m-blogs-en/item/1787-hoa2019?tmpl=component&print=1#sigProIded22969c2d
The Rhythm was also a well attended competition but as many of us discussed at the after party, it left us all wanting more. As one person described, the majority of the couples did not do anything but step from foot to foot, and we have to agree with the observation to a certain degree, there was very little use of isolation and movement in between each beat, with the exception of the winners Natalie & Andre Paramonov who had plenty of motion including some Bachata action prior to starting the rumba. We agree with the statement Andre & Natalie totally used their bodies like musical instruments even though some disagreed with us saying that it perhaps was a little too over-produced. We think they must be referring to their bachata action at the beginning of the rumba. Second went to Shane & Shannon Jensen who took all seconds, but we have to agree with the group, the performance the night before was out of this world but here they lack even some basic isolation to call it great.

Third overall was awarded to Toshko Kondov & Kristen Dobson were a blast of fresh air to this Rhythm. Their use of natural rhythm is terrific and we can easily see them making great strides in future outings. Fourth in this heat went to David Nyemchek & Maysen Wilder who placed fourth overall 4,4,4,5,4; fifth went to Aaron Ksenia Pierce & Stavrica 5,5,5,4,5, and sixth in all went to Jonathan Chen & Juanita Simanekova.

View the embedded image gallery online at:
http://dancebeat.com/m-blogs-en/item/1787-hoa2019?tmpl=component&print=1#sigProIdd8befd787a
The surprise of this night was in the Professional Latin that was quite small with only two couples in it, but as we all agreed their performances made you wonder where to place them. Both Rangel Spirov & Veeronika Chernyavska and Artur Tarnavskyy & Anastasia Danilova were great, both with different styles and great charisma. In the end the win wen to Artur & Anastasia with a majority of firsts in all dances, but truthfully we would have not been surprised if Rangel & Veronika had won the competition.
View the embedded image gallery online at:
http://dancebeat.com/m-blogs-en/item/1787-hoa2019?tmpl=component&print=1#sigProId92445d93c5
In the Professional Ballroom we also had an excellent surprise, the inclusion of Stefano & Bianka Di Brino who gave an excellent performance making the audience cheer as they went along, they are truly very charismatic. The rest of the final was basically a repeat from the night before Vincenso Esposito & Yo Matsubara took second, Jason Rivers & Jennifer Rivers were third and Michael Hudges & Keely brown were fourth.
View the embedded image gallery online at:
http://dancebeat.com/m-blogs-en/item/1787-hoa2019?tmpl=component&print=1#sigProIdc55d12b0a8
There was a nine-dance championship and here the winners were Christopher Wayne & Mallory Evan, our congratulations to them on a great performance.

Our Congratulations to Michelle Hudson for a terrific job and for making us all feel wonderful and comfortable during our stay, her hospitality for a one-woman show was amazing. Great job Michelle! Congratulations on your first event as an organizer!

Dancing in the Heart of America!

There has been two full days of ballroom dancing here at the “Heart of America.”

Last night the professional events started with the Rising Stars and the Open Cabaret, but it also concluded the American Style in both the Smooth and the Rhythm Scholarships.

View the embedded image gallery online at:
http://dancebeat.com/m-blogs-en/item/1787-hoa2019?tmpl=component&print=1#sigProId443734ea61
The Open Professional Cabaret went on first and only two couples entered, however, it was very exciting with two excellent couples competing Jesse Lopez w/ Ariel Peek and Shane & Shannon Jensen. First place was clear from the start and it went to Shane & Shannon, we have seen this couple compete in both Cabaret and American Style for a number of years, and we have to say that their Cabaret was incredible. We could not imagine that they would get even better but they have, it is total perfection. The slide between his legs into a one hand over head was amazing and it made the audience roar. We want to tip our hats to this couple who have come back after their defeat at the British Open better than ever, congratulations! Jesse & Ariel were second and we must point out that their routine did not lack creativity. They had a wonderful routine, unfortunately some of the finishing touches were missing, like leg position, and also the ease of lift work was not up to Shane & Shannon.
View the embedded image gallery online at:
http://dancebeat.com/m-blogs-en/item/1787-hoa2019?tmpl=component&print=1#sigProIdfaa602335d
The Pro/Am Smooth was excellent with lots of entries and great quality dancing, especially in the men’s divisions. The “C” started with a full quarter final round and in the end six couples were called back for this excellent final. The winner in the “C” was Lynn Magnesen w/ Tykhon Zhyvko and they won all dances, taking second in all dances and in our opinion could have won a few dances was Gracelyn Tuoti w/ Andrei Abrashin, and third was Charlene Proctor w/ Mikhail Zharinov and they took third in all dances. In the “A” division of the Smooth, Stefan Tuomanen w/ Michelle Officer won overall 3,1,1,2, second wen to Hailey Winterburg w/ Johnny Francoviglia 4,2,2,1, and third was awarded to Zoe Kaplan w/ Martin Pickering. The “B” was an 8-couple final and this scholarship went to Kathy Howell w/ Martin Cawston wining all dances. Second was awarded to Aimee Neumann w/ Martin Pickering and this was in all dances as well and third wen to Gary Parkers w/ Jaimee Simon 4,3,3,4. In the SR division first went to Cynthia Wolfsohn w/ Alex Zagrean taking first in all dances, second was Dee Iannone w/ Derek Pasqualetto 2,2,2,3, leaving third to Scott Skinner w/ Jessica Mancini 3,3,3,2.
View the embedded image gallery online at:
http://dancebeat.com/m-blogs-en/item/1787-hoa2019?tmpl=component&print=1#sigProIda977c1cd2c
The Rhythm Pro/Am were also terrific heats and here the “C” was awarded to Lynn Magnesen w/ Tykhon Zhyvkov winning all dances, second was Gracelyn Tuoti w/ Andrei Abrashin and third in all dances was awarded to Nancy Smith w/ Hays Hopkins. In the “B” division Jeravae Christensen w/ Justin McClendon was first overall 1,2,1,2,1, second went to Sally Lee w/ Scott Anderson 2,1,2,1,2 and third was Ryane Englar w/ Lowell Fox, taking third in all dances. In the SR Dee Iannone w/ Derek Pasqualetto took all firsts, Susan Iverson w/ Jay Larson was second 3,2T,2,2,2, and third was awarded to Rosemary Rocha w/ Scott Anderson 2,2T,3,3,3. In the “A” category Stefan Tuomanen w/ Michelle Officer was first in all dances, second went to Abby Morris w/ David Castro 2,2,2T,2,2 and third place went to Clay Mitchell w/ Amanda Buchana 3,3,2T,3,3.

As we mentioned earlier the Rising Star professional events took place last night and in the Rhythm David Nyemchek & Maysen Wilder were first overall 1,1,2,1,1, second was awarded to Aaron Pierce & Ksenia Stavrica, and in third position was Jonathan Chen & Juanita Simanekova. In the Rising Star Ballroom the winners were Vicenzo Esposito & Yo Matsubara placing first in all dances, second was Jason Rivers & Jannifer Davids taking second in all. And third in all was Michael Hughes & Keely Brown.

Tonight we will have the conclusion of the open professional events and it should be a terrific competition.