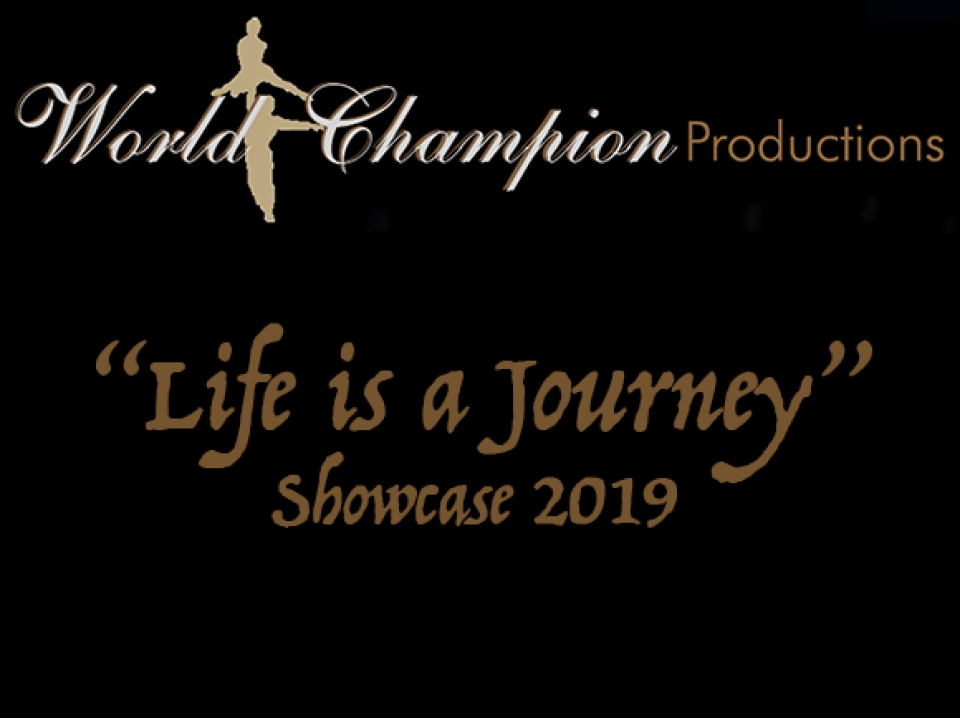 Life is a Journey!

Yesterday, October 5, 2019, was the World Champion Productions 2019 Showcase entitled, “Life is a Journey.”

It was held in Nashville, Tennessee at the Ingram Hall, at Vanderbilt University, a charming theater that seats over 800 people and it was a performance to be acclaimed.

View the embedded image gallery online at:
http://dancebeat.com/m-blogs-en/item/1810-wcp19#sigProId546e90427e
The day began with a full rehearsal of all solo routines from the World Champion Productions Ballroom dance schools at 8AM, followed by lunch then at promptly 4PM when all guests were seated, the production began.
View the embedded image gallery online at:
http://dancebeat.com/m-blogs-en/item/1810-wcp19#sigProIdd34884492e
The first act of three “Where are we Going,” began with an open waltz by all students of the academies, followed by some terrific dance showcase spectaculars such as “In the Heights” by Debbie Jones, “I Can’t Say No” with Sue Buckles, “Senorita” with Carol Humphrey, “On Broadway” with Sherry Petrie and “The River” by Ron & Janet Erickson. This was followed by a presentation by the students of bronze waltz, tango, silver, foxtrot and international foxtrot. The first act continued with more showcases “Welcome to Wonderland” a funny and entertaining number by Rob Write & Diann Vaccaro, and then we got to see one of our favorite pro/am showcase performers of all time, Carol McAlpine doing what else but, a wonderful rendition of “Hello Dolly.” We have seen Carol perform for many years and it was as always an incredible pleasure to see her do such a terrific performance, to this Bette Miller, Hello Dolly song. Carol’s solo was followed by Tom Heath dancing “American Woman” with two of his teachers and then Sandy Spitz did “Ya Got Me,” with this the first act concluded.
View the embedded image gallery online at:
http://dancebeat.com/m-blogs-en/item/1810-wcp19#sigProId62e11f2b27
There was just enough time to grab a drink and a snack and we were back for the second act that once again started with an all on waltz. This was followed by Kim Banks doing “Little red Wagon,” Dorin Richards performing “Drive my Car,” and Jennifer Moss doing “Go Go Train.” These three performances were followed by a presentation of Silver American cha cha by students, and Bronze Rumba, and Swing. We then wen to back to more spectacular performances. Sydney Carrol did “These Boots were Made for Walking.” After this Ron & Janet were back, this time without teachers, performing “Bless the Broken Road.” Al Mellilli showed us “Tango To Evora,” Elaine Hammond did “I Giorni Dell’Ira,” Bill Spitz who we used to see competing on the ballroom circuit made a come back and concluded this second act with Robin Ray & Summer Elkin doing “Change Partners.”
View the embedded image gallery online at:
http://dancebeat.com/m-blogs-en/item/1810-wcp19#sigProIddeb9a2c170
The third act started with a bang with Erna Plaxco doing “New Attitude,” followed by Debbie McClish and “Flux,” Lou Ponce gave us his rendition of the Evita song, “You Must Love Me” with a General Peron costume and all. This was followed by “How Far I’ll go” with Carolyn Henry, and then Jennifer Moss did “You Say.” After these showcase performances we had a presentation of bolero, a presentation of the gold mambo, and merengue. Once this presentations of standard dances went through we were back to the solo spectaculars with Becky Countess doing “Attitude Dancing,” Debbie Duke performing “I’m Alive.” Debbie Jones did “I can’t be Bothered Now,” and Carol McAlpine was back with her interpretation of “That’s Life”.

We were quite impressed with how well executed all these pro/am spectacular showcases were performed, there was few, if any, fumbles we could spot and it was truly a delightful showcase that took us through a terrific journey of pro/am solo dancing at its best.

We must mention that in between some of these fantastic solo performances, the professionals of World Champion Productions, performed a number of spectaculars as well complimenting and highlighting the hard working pro/ams as well as giving some of the hard at working students a moment to take a well deserved breath.

View the embedded image gallery online at:
http://dancebeat.com/m-blogs-en/item/1810-wcp19#sigProId4d8cf046a4
The 2019 Showcase, was followed by a terrific dinner, we also took a quick look at some of the performances especially for the students who really were the main solo stars of this World Championship Productions spectacular. With laughs and cheers we acknowledged their work and Mr. Tim Polaschek mentioned that this was the premier for many of these routines, because they now take them on the road to many of the independent events across the USA, and abroad and perform each of them making them with every performance better and better and with this increasing their knowledge in every way.

Our congratulations to Mr. David Elkin the founder and president of World Champion Productions as well as to the event coordinator, Ms. Robin Ray, who took care of us from the moment we arrived and who carefully gave final touches to this 2019 Showcase of “Life is a Journey.”

View the embedded image gallery online at:
http://dancebeat.com/m-blogs-en/item/1810-wcp19#sigProIde7119b9629
It was also great to be here in Nashville and see and hear the many ways music can be interpreted through dance, and by musicians. The day after the event we took time to walk around and see some of Music City’s wonders. Take a look at some of the pictures.