Turnabouts in Smooth at Nashville 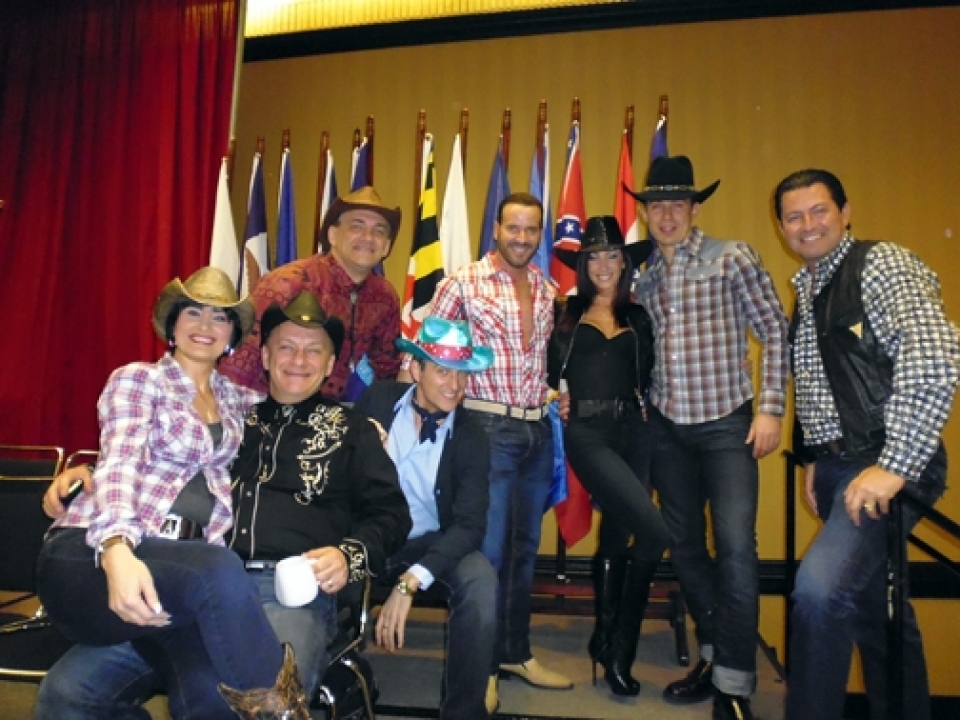 Last night we saw some jockeying for position at the first major event of 2014 in the Pro Smooth.

It was by far the best event of the night, danced over 3 rounds. Travis & Jaimee Tuft were the clear winners, taking all 4 dances with the clear majority of 1st places. The battle was for 2nd place and there were 3 couples contesting this placement and all had their supporters and gained ‘2nd or better’ scores in every dance. Only in

the Viennese Waltz did one of these couples receive the majority of ‘2nd or better’ scores and this was Kyle & Allie Spinder who did achieve 2nd place overall in all 4 dances. This was their best result to date as it placed them ahead of David & Natalie Shulz (3,3,3,3) and Vlad & Vera Kosarev (4,4,4,4). It wil be interesting to see if they can maintain this form further into the year. It was also close for 5th place, but Rule 11 gave it to Mark Short & Alyssa Kark (5,5,6,6) over Morten Jensen & Tonja Martin (6,6,5,5). Watch out for Jenell Maranto’s report on this division in Dance Beat soon. "The only way to make sense out of change is to plunge into it, move with it, and join the dance" Click here for more

The other 3 divisions were straight finals and it was a good weekend for Sergiy Samchynskyy & Yuliya Besarab, now from Georgia, who won both the Ballroom and Latin winning all 10 dances, easily in our opinion.

Their toughest competition came in the Ballroom from 2nd placed Martin & Liene Reinbold (2,2,2,2,2). 3rd in all dances were Oleksiy Buravenko & Victoria Karzukhina, 4th in all to Matt Rivers & Maliwan Diemer; 5th in all to Kevin Camarata & Michelle Jones and 6th to Brad Coutney & Elisa Seja.

In the Latin Matt & Maliwan were 2nd in all dances. Vlad Astafiev & Linda Gergye were 3rd in all; Denis & Amanda Satonin were 4th in all and Mario Skonieczny & Mary Jester.

Erwin & Iwona Rybcznska had a comfortable majority of 1st places in all dances to take the Pro Rhythm from the new partnership of Slash Sharan & Megan Anderson who were 2nd in all. An even newer partnership, Sandor Stefil & Alexandra Barsukov were 3rd in all. With 4,4,4,4,5, Christopher Wayne & Lisa Burghart were 4th, Michael Foncannon & Meghan McNash were 5th, 5,5,5,5,4 and Aaron Greer & Adrienne Hite were 6th.

The pro-ams danced both international styles today and the open scholarships of both were in the evening. The Open B Ballroom was the best event, beginning with a semifinal. Jill Bradford w/ Gert Roslender was the winner

Nashville Starz is the season finale for the Dancers Cup Tour, so the top prizes were awarded. Winning Top Teacher this year was Louis Bar.

Louis was surprised by the secret arrival of his two children who actually presented him with his award. Louis’ student, Laren LaPointe was the top female student of the year and the top male was Russ Longley.

Put On Your Western Duds for Nashville Starz!

Last night was country western night at Nashville Starz, everyone was encouraged to wear their finest hats and jeans and the evening ended with a country style cookout in the ballroom.

But before that i

t was the turn of the Rising Star professionals to be the “Starz.” All four styles resulted in fairly comfortable wins. In the Smooth, Kyle & Allie Spinder took all dances followed by Mark Short & Alyssa Kark (2,2,3,2) and Morten Jensen & Tonja Martin (3,3,2,3). We thought this was the strongest of the four divisions.

Matt Rivers & Maliwan Diener won the Latin losing only the cha cha. Winning the cha cha and taking 2nd in the other 4 dances were

Martin & Liene Reinbold won the Ballroom, the smallest of the four divisions, again taking all dances. 2nd in all were Matt & Maliwan and 3rd, Kevin Camarata & Michelle Jones, 4,4,3,3,3.

pro-ams it was a day of Smooth. Robert Schipp w/ Shalene Archer won the Open B Scholarship 1,1,1,1. Louise

Completing the 9-Dance saw Briana Yadgir w/ Chris Germain as the winners.  She won all 9 dances.

Over 6,000 Entries for Nashville Starz!

David Hamilton’s Nashville Starz is in a bumper year with over 6,000 entries for 2014.

This despite unavoidable hotel problems when he was forced to relocate to the Marriott Renaissance as the original venue, the Sheraton was unable to accommodate the event due to renovations.

The first day was dedicated to the pro-am Rhythm categories. The Open Scholarships were split into only 2 age categories – A and B. The A produced an interesting result as Giovanni Fortezza w/ Jolanta Mosteika won the event over the US Open A Champion, Brianna Yadgir w/ Aaron Desotto. Giovanni won all dances and Brianna was 2nd in all. It was a good day for the gents as Stephan Tuomanen w/ Michelle Officer was 3rd, 3,3,3,4,3.

The night ended with a pizza and karaoke party for everybody - lots of laughs I'm sure!

Today it’s Smooth day at Nashville Starz plus watch out for results from the professional rising star divisions.