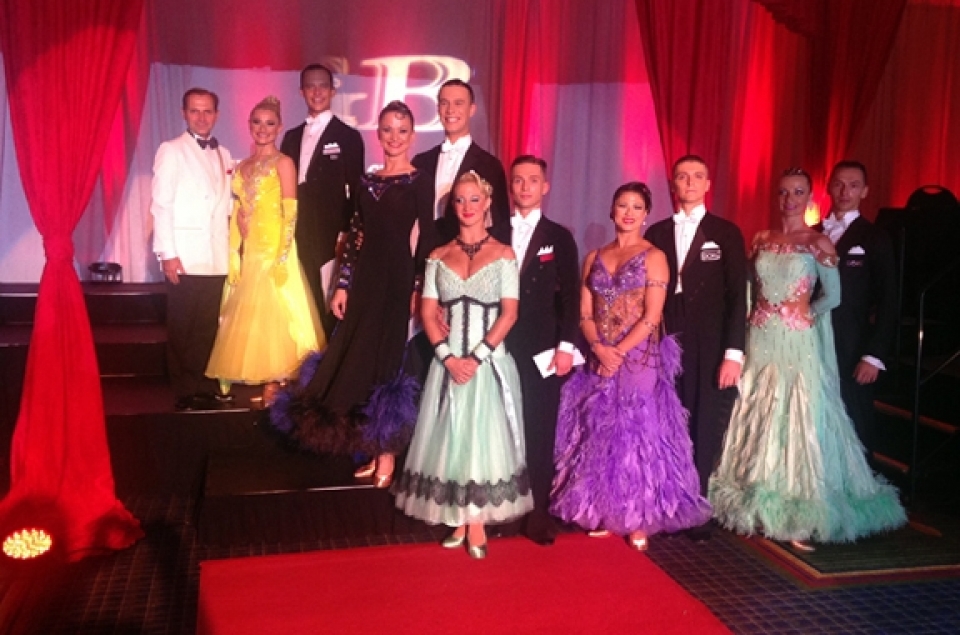 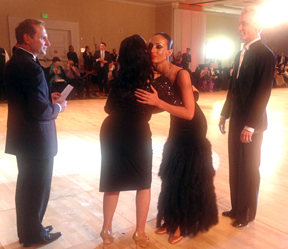 IGB Comes to a Close!

Last night the IGB came to a close with the last of the professional open events. The best and most attended was the Professional Smooth with five couples and here it was an easy win for Mikolay Czameki & Victoria Malko who won the W,T with perfect scores from all judges, the other two dances they had a huge majority with only a few judges awarding them second, and in the VW Anna Trebunskaya from DWT awarded them a third. Second in this heat was David Estrada & Stephanie Betts they took a third in the waltz but second in the other dances. Third overall went to Sean Brunell & Ekaterina Marshukova and they took the second in the waltz from David & Stephanie. 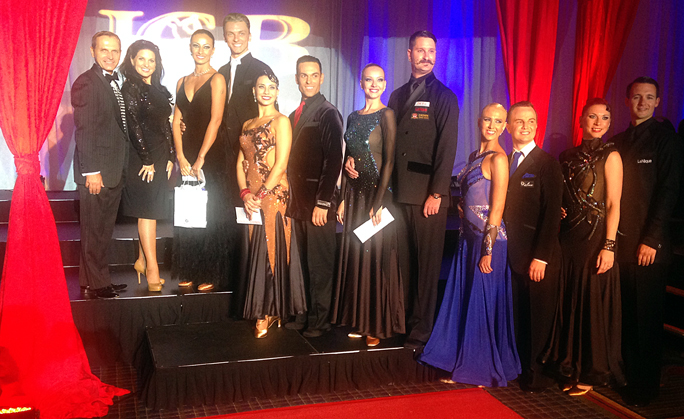 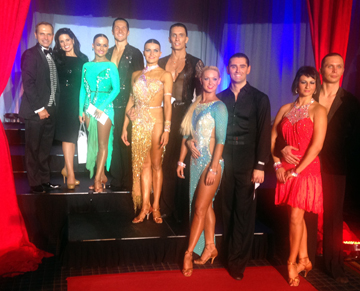 The Pro Latin had four couples total and this competition went to Andrey Tarasov & Yulia Kuznetsova who won all five dances. In looking at the marks it was a clear win but they did manage to take a few seconds from a number of judges, we our selves though that Evgeniy Likhachev & Mariya Potys could have easily taken the competition but both couples were in great form and it was a wonderful competition to witness. Third was awarded to Evgeniy Nazarov & Amy Bennett.

The third and the most attended event this final night was the Amateur Youth U/21 Championship. Here Eric Ascione & Grace Anderson placed first overall 1,1,2,2,1. Second in this event wen to Umario Diallo & Natasha Zrazhevskaya and third went to Gregory Rybakov & Ellen Anshelevich. 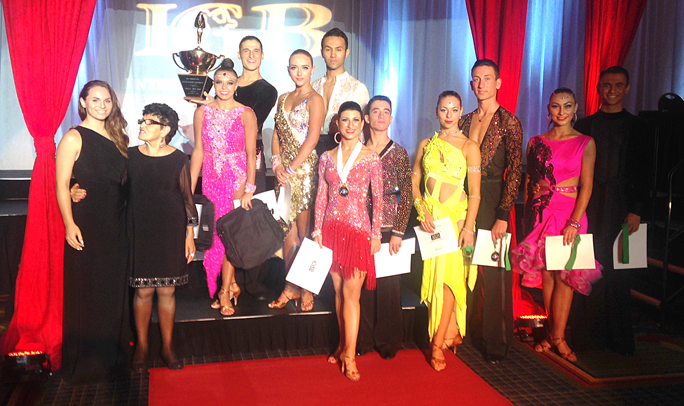 And as Beth Knoll said on her face book page: “Big huge "thank you" to Stephan Krauel and Denise Jourdaine for yet another wonderful weekend at the International Grand Ball! So much fun watching great dancing, seeing old friends and meeting new ones, and just generally having a good time! This competition is one of the oldest and most respected competitions in the US, and Stephan and Denise run it with class and expert attention to detail. I mean REALLY..... at what other competition can you drink diamond-infused water?”

Last night was the main evening at this grand and historic competition. With nearly 50 years under its’ belt it can still produce some excellent dancing and terrific results. 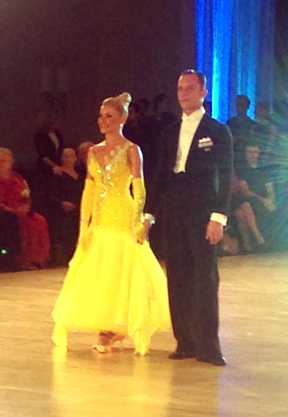 ut of the two featured professional events the Ballroom to me had the most punch. From the start it was clear as to where the top placements were going to go, a clear fight between Denis Kutepov & Lesya Sinitsa and Yarasloav Bieliei & Olga Tsikalyuk. Overall Denis & Lesya won all dances with the majority of firsts in every dance from the judges.  There was only a judge of two that did not agree and gave them seconds, but their only third came from Alan Dixon who gave them it to them in the VW. Seconds in this parade of wonderful dancers went to Yaroslav Bieliei & Olga Tsikalyuk, they placed second in every dance but not always with a huge majority of seconds. Yaroslav & Olga got some firsts, seconds and even a fourth from Judge Nadia Eftadal in their VW. Their most amount of seconds was in the foxtrot and quickstep.

Third in the Professional Ballroom went to Igor Colac & Roxane Milotti, but from here the marks got murkier 3,4,3,4,3. Fourth overall was awarded to Michal Towliszew & Tiffany Fung.  We were a little disappointed in this couple’s performance we expected a little better.   They started well but by the end for us they fizzled out 4,3,4,3,4. A clear fifth position was awarded to Evganiy Mayorov & Olga Lisovskaya. 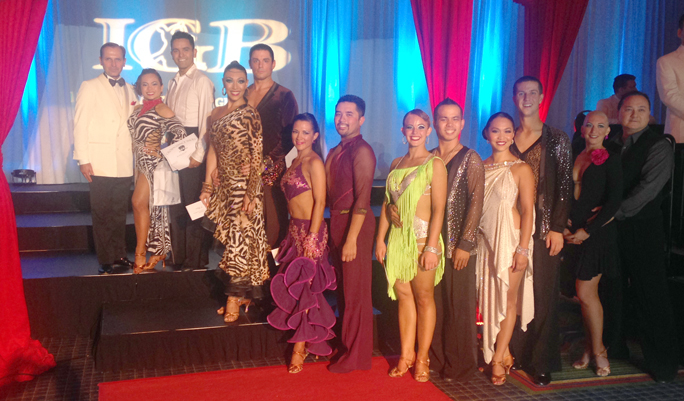 The Professional Rhythm was also a well attended heat at this “Grand” competition. Here for us was more like a coin toss.  The winners overall were Richard & Marianne Myers, who won all da 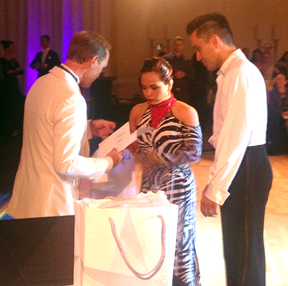 nces but not with a majority of firsts, they had to rely on fifth or better to get them through. We usually love this couple, unfortunately for us their performance was not totally up to snuff today.  Richard has gained a few pounds since the last time we saw him and her zebra print outfit had for us too much going on - fringe, red sequins and her hair had just as many colors. Never mind the combination of all the judges’ marks presented them with first place in all dances.

Second in this professional event wen to Jim Clark & Tania Chegini, who for us had every thing going for them this evening, but we most also point out that they did not place second in every dance 2,3,2,2,3. This was the best work the Dance Beat Team has seen from this talented couple. Third overall was awarded to Jeremy Babagay & Carolyn Barreno 3,4,4,3,2, fourth wen to Daniel Lee Tran & Taylor Elizabeth Kinney 4,2,3,4,4 and fifth was awarded to Zach Crawford & Kate Castro 5,5,5,5,5 and Albert Ayers & Kristina Mola were sixth in all dances.

The Adult Amateur Latin was small but with great energy.  Here Nikolay Tarasov & Egle Straleckaite won all dances with the majority of firsts from the judges. Second overall wen to Umario Diallo & Natasha Zrazhevskaya and they took second in every dance with a majority, and third was awarded to Parker Lynn & Kristina Tieken and they got third in every dance. 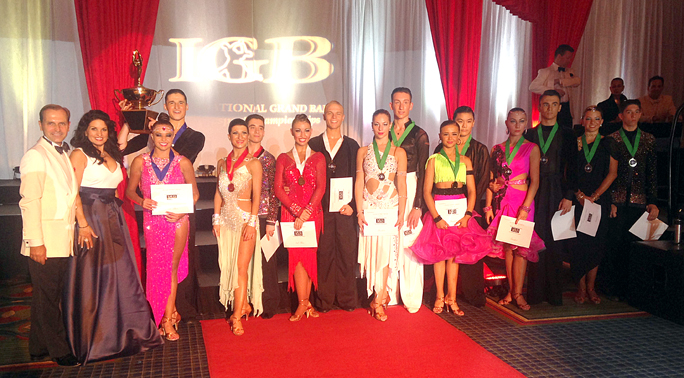 The Amateur youth Latin Championship was better attended with a seven couple final and here Eric Ascione & Grace Anderson took first in all dances with a majority of firsts in almost every dance. Gregory Rybakov & Ellen Anshelevich placed second overall and in every dance and third was awarded to Tyler Alder & Makayla Bezzant here things got a little different - here are their marks 4,3,3,3,3.

The International Grand Ball continues to be a terrific competition to attend and it offers great music, a great ballroom and excellent prizes. Tonight we will see the Professional Latin and the Professional American Smooth, look forward to an excellent event as it was yesterday.