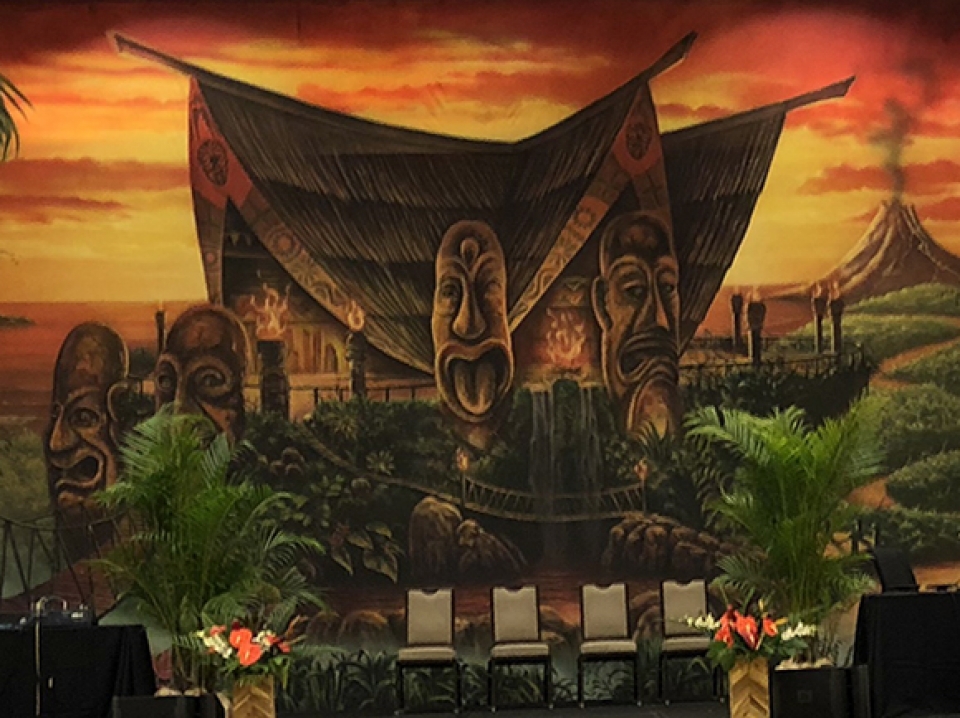 All Left the Same!

View the embedded image gallery online at:
https://dancebeat.com/m-blogs-en/item/1806-hawaii19#sigProIdc51c23f65d
In the Professional Smooth, US finalist, Yegor Novikov & Alexandra Smirnova won every dance with perfect scores in the waltz and the majority of firsts in the other three dances. Pat West was the only judge to award them second overall, she marked them first in the waltz and second in the other four dances. For us it was a great night for Yegor & Alexandra who have tightened their skills quite a lot and are now projecting a clear path to their interpretation with beautiful lines and playful musical routines. Congratulations to them they seem to have worked very hard of late. Second was awarded to the brother and sister team of Slava Kostianets & Valeriia Kostianets taking second in every dance, but unlike Yegor & Alexandra their score sheet was not as clean. They took a number of third place marks as well as seconds and even a few fourth place marks. We totally agree with the judges on this count, but were a little surprised with the few fourths they got. Their work is secure and very precise, perhaps the Ballroom selection of their routine they decided to go with for their dance on did not help their cause, maybe the judges might have been more impressed if they showcased Open Smooth from the start.

Third in all dances was awarded to Tykhon & Yana Zhyvkov who continue to make progress in this fairly new style for them. Fourth went to Elisa & Stephen McCann and they took fourth in all dances, for us we though they could have been place third in a couple of their dances their work keeps getting better and better with every outing and last night they were on. Fifth place went to Igor & Natalia Dogoter and fifth were Oxana Kashkina & Antonio Nunez, and they took the same fifth and sixth placements in every dance as well.

View the embedded image gallery online at:
https://dancebeat.com/m-blogs-en/item/1806-hawaii19#sigProId41d18665f8
Stefano & Bianka Di Brino were in attendance this evening and they too won all dances with a majority of firsts and the tango and quickstep with perfect scores. It was interesting to see that even though they lost getting perfect scores by one mark in both their waltzes, their foxtrot was awarded 3 second place marks. We must also point out that all the first place marks that Stefano & Bianka lost in all dances were awarded to Serhiy Averkov & Olena Barna, and they placed second in all dances. Third in all dances went to Slava Kostianets & Valeria Kostianets and it was basically a comfortable and clear third places in all dances for them in all dances. Michelle Brecker & Oleg Telha were fourth, Stephen Nadeau & Jassica Smith took fifth and Shoji & Yoshiko Fujimi (Japan) were sixth.
View the embedded image gallery online at:
https://dancebeat.com/m-blogs-en/item/1806-hawaii19#sigProId5a1bb1eb8e
In the Professional Rhythm it was basically a repeat from the night before and here Oxana Kashkina & Antonio Nunes won the open professional Rhythm with first in all dances and with a majority of firsts in all dances. Oxana & Antonio’s work seems to have also improved quite a lot in the last month or so. Everything seems to have more depth and clarity to their moves. We must also congratulate them on their placement on the floor, they did not get tangled up with other couples and best of all they stood in full light where we could see them. Luisa Alvarez & Jacody Bullard took second in all dances, Zsolt Katona & Timea Poytes were third in all, Andre Baltierra & Danae Gill were fourth and Jordan Cano & Ilia Gonzalez took fifth.
View the embedded image gallery online at:
https://dancebeat.com/m-blogs-en/item/1806-hawaii19#sigProIdbad07f2632
Lukas & Simona Alisauskas had perfect scores (11 first places in all dances) in the Open Latin.  Zsolt Katona & Timea Potys were 2nd in all. Stephen Nadeau & Jessica Smith placed third in all dances and Shoji & Yoshiko Fujimi (Japan) took all fourths.


In the cabaret division there were also five couples entered and this was won by Tyhkon & Yana Zhyvkov, but we must point out that they only got four out of the nine firsts from the judges. Second and first were basically decided by one point with 10 points being the higher mark and Stefano & Bianka Di Brino getting 11 points. Third was Oxana Kashkina & Antonio Nunes, fourth was awarded to Aki & Jun Nakaaki, and fifth were Reina Furukawa & Akira Suzuki.

As we mentioned in our first blog, this year we had a huge wave of entries with over 5 thousand on the books. We want to congratulate the fairly new organizers of the Hawaii Star Ball, David Alvarez & John Allen, for the excellent effort on getting couples from Australia, Japan and other parts of the world. We also want to say thanks for having us in such a lovely location once again.

It is great to be back to the island of “Aloha!” The word means goodbye, but it also means hello, and where the circle of the lei signifies a no beginning and no end, just like the beautiful islands themselves.

View the embedded image gallery online at:
https://dancebeat.com/m-blogs-en/item/1806-hawaii19#sigProId7d4fb189f3
This year’s Hawaii Star Ball was the biggest we have ever attended with over 5K entries and yesterday between the pro/am Smooth and Latin we for sure felt it, beginning at 7:30 in the morning and finishing sometime after midnight.
View the embedded image gallery online at:
https://dancebeat.com/m-blogs-en/item/1806-hawaii19#sigProId75dfc9e4a6
Last night’s festivities concluded with all the Professional Rising Star events. The Smooth was the largest and most interesting of all the Rising Stars with a semifinal round, and the first same-sex couple entering under the new mandate of the NDCA gender-neutral competition. Tykhon & Yana Zhyvko won all dances, Igor Dogoter & Natalie took all seconds, and Ivan Spasov & Sabina Blyth were third 4,4,3,3. Antonio Nunes & Oxana Kashkina placed fourth 3,3,4,4; Aki & Jun Nakaaki (Japan) were fifth 5,5T,5,6, and Charles Leonard & Kamila Mirzalieva took sixth 6,5T,6,5. Due to the news of the NDCA mandate we must also mention that the same gender couple did not make the final.

During the day and part of the night, it was a Smooth and Latin Pro/Am marathon with hundreds of entries of all ages and categories. Today is like in most US Competitions, Ballroom day and will finish with a banquet gala dinner were we are sure to see some beautiful leis and beautifully dressed people in the ballroom, we will also witness all the Open Professional events, so tune in for our take on today’s events, sometime tomorrow.