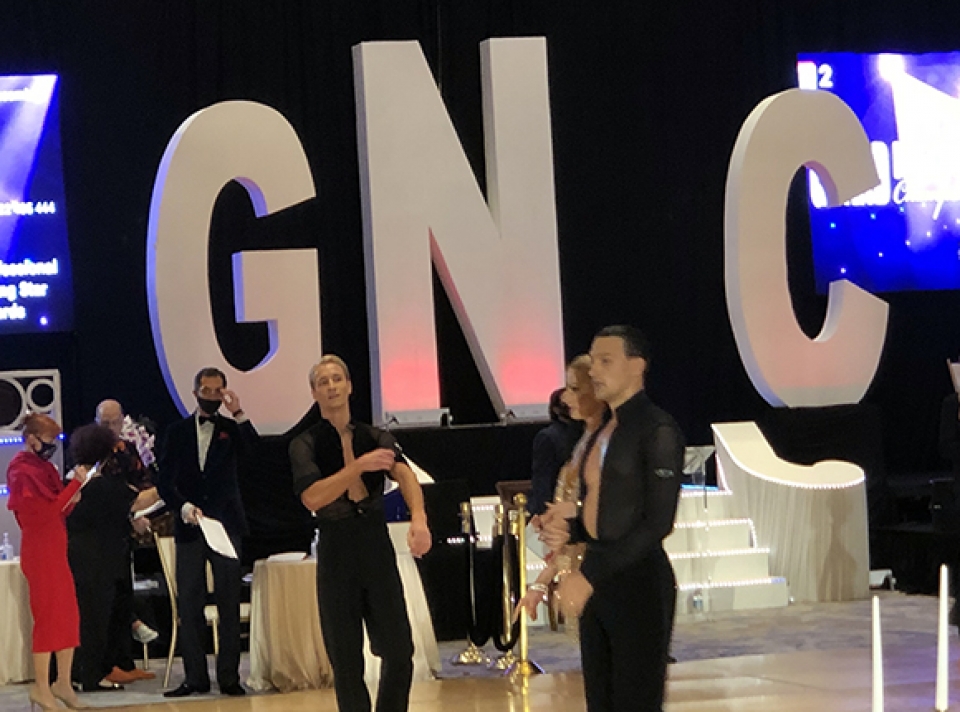 After months of almost nothing with few events on the schedule and even fewer with that many entries, we finely detected a pulse!

The Grand Nationals Championships started Thursday the 29th of October with a nightclub session and ended Halloween night Saturday, October 31st. Grand Nationals had a whopping seven and a half thousand entries for the weekend and it concluded with upscale professional championships featuring some US Finalists in all divisions and running a full semifinal round in both the Professional Smooth and Latin.

View the embedded image gallery online at:
https://dancebeat.com/m-blogs-en/item/1894-gn20#sigProIde4786334c0
Saturday was the busiest and the hardest day of competition, mainly due to the participation of so many pre-teen, youth and junior competitors from the surrounding areas of Miami, North Beach, Boca Raton, Doral and a few that came from out state. Who knew that Florida was becoming such a hotbed of junior dancing? The same went for all pro-am events. There were plenty from Florida but we saw plenty from out of state as far as California. No doubt the cancelation of Hollywood Dancesport in California that was scheduled for this same weekend contributed to some west coast entries. It was a little worrisome Saturday afternoon when the kids’ competitions took place due to the amount of spectators gathered. The organizers made sure to keep making people move all around the ballroom and not gather on top of each other, making announcements in English and in Russian for those parents that only spoke Russian. Overall they followed the instructions and it was also nice to see that at all times the judges were in full compliance with the Covid 19 policies, some even sporting mask and shields and even the occasional glove.

Although we had some wonderful pro-am events with full semifinals and even some quarter finals, the highlight was Saturday night with the Professional Smooth and Latin. Th pro events followed a 5-course banquet dinner in the ballroom that was literally sold out due to social distancing requirements.

View the embedded image gallery online at:
https://dancebeat.com/m-blogs-en/item/1894-gn20#sigProIde65f0614bf
In the Smooth we had a duel between Travis & Jaimie Tuft and Roman Malkhasyan & Galina Detkina. Roman & Galina were comfortable winners with clear majorities of first places in all dances. But all did not stop there up and coming couple, Nicolai Pilipenchuck & Sarika Hudson were also in this final being challenge by Jang & Adele Don. Nicolai & Sarika took 3rd in the first 3 dances with a majority of 3rd or better scores but Jang & Adele took 3rdin the VW. Two fairly new and impressive partnerships took the next two places - Dmitrii Zavialov & Arina Sokolova were 5th in all dances and Oleksiy Pigotskyy & Anastasiia Zhuchenko were 6th in all. Dmytro Pohybil & Alona Kushnir rounded out this 7-couple final.
View the embedded image gallery online at:
https://dancebeat.com/m-blogs-en/item/1894-gn20#sigProIdac6aaf9ad5
The crowd went crazy with excitement for the Latin where Artur Tarnasky & Anastasia Danilova, now Floridians themselves, took to the floor, challenged by Pasha Stepanchuk & Gabriella Sabler. Artur & Anastasia took all dances with the majority of 1st places. Pasha & Gabriella had the majority of “2nd or better scores” in all dances. 3rd through 5th placements were much more in question, with the judges showing little consensus. 3rd went to Nikita Malakhov & Nadezda Vlasova 5,3,3,4,3; 4th to Roman Italyankin & Sahsa Bokova 3,4,4,5,4 and 5th to Ivan Kudashev & Ksenia Sokolova 4,6,5,3,5. An amateur partnership that recently moved to the Pro ranks, Andriy Besyedin & Amanda Besyedin, took 6th, 6,5,6,6,6 and Fedor Artemev & Ekaterina Artemeva were 7th in all dances.
View the embedded image gallery online at:
https://dancebeat.com/m-blogs-en/item/1894-gn20#sigProIdea67d051ed
US Pro Rhythm Champions and Floridians, Andre & Natalie Paramonov, won all dances in their division and in fact lost only 2 first place marks out of 55. We felt that the closest race in the final was for 2nd and 3rd places, but the judges awarded the majority of 2nd place marks in all dances to Dmitry & Olena Nikishkin leaving 3rd place in all dances to Shane & Shannon Jensen. Jang & Adele Don once again took 4th in all dances. Igor Puzhevich & Tetyana Makarenko were 5th in all dances, Andrius Butkus & Maria Balashova were 6th in all and William Brand & Roseanna George were 7th in all.
View the embedded image gallery online at:
https://dancebeat.com/m-blogs-en/item/1894-gn20#sigProIda4763bbbc2
Rudy Homm & Katia Kanevskaya, now also Floridians, easily won the Pro Ballroom. They also lost very few first place marks, only 4 out of 55. We saw a battle for 2nd place, realistically between 3 couples. This runners-up place went to Aleksei Minaev & Elena Minaeva who scored 3,3,2,2,2. 3rd were Artem Belmeha & Anna Shevchenko 2,4,4,3,3 and 4th Igor Colac & Roxane Milotti, 4,2,3,4,4. Mriko Spano & Pamela Romano were 5th in all dances, Alexander Elsbury & Grace Gallagher were 6th in all and Oleg Teleha & Michelle Brecker were 7th.
View the embedded image gallery online at:
https://dancebeat.com/m-blogs-en/item/1894-gn20#sigProIdb324d34265
Fedor Artemev & Ekaterina Artemeva won the Pro Cabaret and Aleksei Smirnov & Daria Smirnova were second, although they had problems with their music and had to dance in silence.