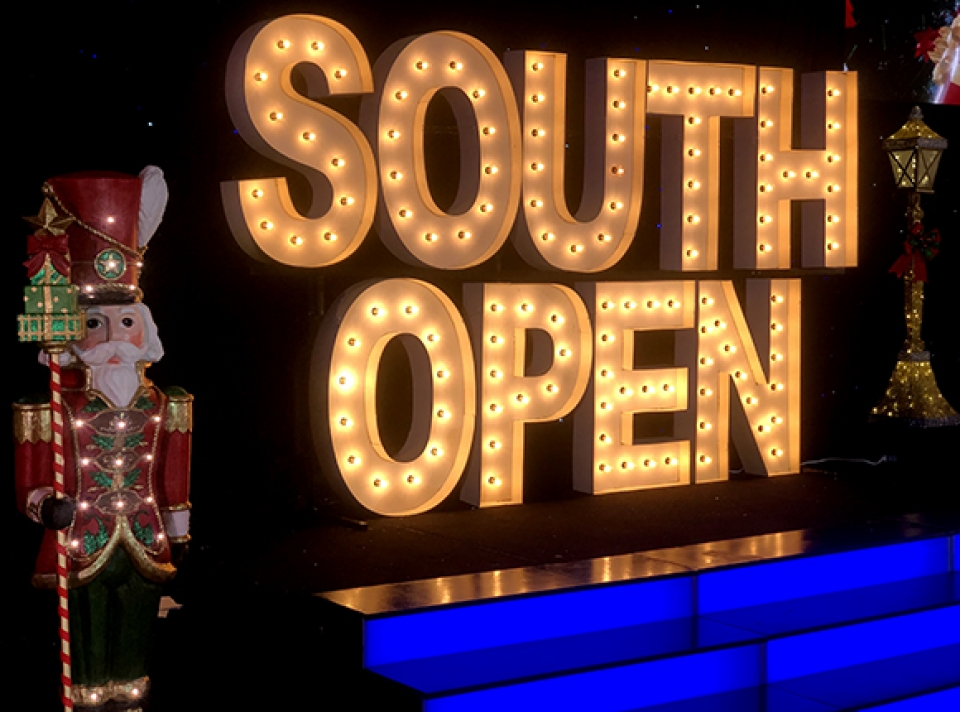 The Conclusion of South Open

The featured events were the Open Pro divisions in Rhythm and Ballroom and the Amateur Latin Championship.

View the embedded image gallery online at:
https://dancebeat.com/m-blogs-en/item/1898-southopen20#sigProId63c68dff49
The largest event was the Pro Rhythm and this was won by the current (2019) US Champions, Andre & Natalie Paramonov. They were the easy winners, losing only exactly one 1st place in each dance. Runners-up in all dances were Dmitry & Olena Nikishkin. As with the winners, they lost very few 2nd place scores (never more than 2 in any dance) and took the 5 first places the Paramonovs lost. Strangely, three of these lost second places were 6th place scores. The new partnership of Shandor Shtefil & Evgeniia Elcoro were 3rd in all dances, but the judges were less decided on the lower placements than they were on the first two. Shandor & Evgeniia did not receive the majority of “3rd or better” placements in any dance. With 4,4,4,5,4, Jang & Adele Don took 4th and were also the 9-Dance Champions for the event. Gene & Elena Bursten were 5th 5,5,5,4,5; 6th Eddie Rivera & Jailene Espinosa 7,7,6,6,6; 7th Jonathan Chen & Juanita Simanekova 6,6,8,8,7; 8th Antonio Nunez & Oxana Kashkina 8,8,7,7,8.
View the embedded image gallery online at:
https://dancebeat.com/m-blogs-en/item/1898-southopen20#sigProIda7f1b1f13b
The Open Pro Ballroom brought together 2 of the country’s leading couples and the victory on this occasion went to Rudy Homm & Katya Kanevskaya and they won all 5 dances, all with a majority of 1st places. VW was the closest scored with Rudy & Katya taking 8 first places out of 15. The runners up were Iaroslav & Lilia Bieliei, 2,2,2,2,2. They were very easily 2nd and took a significant amount of 1st places in each dance – 7 in VW. All the remaining positions were more closely contested. 3rd spot went to Aleksei Minaev & Elena Minaeva 4,3,3,4,3; 4th Oreste Alitto & Valeriia Belozerova 3,4,4,3,4; 5th Artur Kozun & Monika Pyrgiel 5,6,5,5,6; 6th Aleksei Alekseev & Ekaterina Derevleva 6,5,6,6,5.
View the embedded image gallery online at:
https://dancebeat.com/m-blogs-en/item/1898-southopen20#sigProId19491147bb
The Open Amateur Latin was an 8-couple final and the top 2 places were taken by 2 brothers, both with new partners. The Firestein brothers from NJ were these brothers. The win went to Max Firestein & Nicole Mtchedlidze and they won all dances quite easily, losing very few first place marks. Dave Firestein & Kennedy Eaton were the runners-up, 2,3,2,3,2, and they were pushed hard by another new partnership, Kristers Smits & Shelly Umansky 3,2,3,2,3. They are also from NJ. Carter Williams & Rylee Arnold were 4th in all dances; 5th Benson Maier & Elisabeth Thompson 6,5,5,5,5; 6th Matthew Bezzant & Hailey Bills 5,7,6,6,6; 7th Daniel Pollack & Alexis Pollack 7,8,7,7,7; 8th Daniel Zakirzyanov & Daniela Alaviie 8,6,8,8,8.
View the embedded image gallery online at:
https://dancebeat.com/m-blogs-en/item/1898-southopen20#sigProId7ae3542f2a
There was also a strong Open Amateur Smooth 8-couple final. This was an “all Utah” event. In the last few years Utah has become the epicenter of amateur Smooth dancing. The winners tonight were Brandon Keck & Kaylee Christensen 1,1,1,2. Brandon & Kaylee are the current (2020) US Champions in this division. The Amateur Smooth was one of the few national titles run in 2020. The winners of the VW were the runners-up - Tanner Cole & Savana Francia – but they were quite far from the winners with their full scores were 4,3,2,1. 3rd were Benson Maier & Elisabeth Thompson 2,2,4,4; 4th Blake Fox & Nicole Ascione 5,4,3,3; 5th Bronson Baker & Jiaxin Haslam 3,5,5,5; 6th Sawyer Stolle & Serena Keck 6,6,6,6; 7th Nathan Stevenson & Ashton Cole 7,7,7,7; 8th Shanden Hoffman & Mina Brunson 8,8,8,8.
View the embedded image gallery online at:
https://dancebeat.com/m-blogs-en/item/1898-southopen20#sigProIda72f9bfa1f
Only 3 couples entered the Cabaret Championship, the two who contested the RS Cabaret Friday night and the winners tonight - Craig Smith & Andrea Harvey who received all 13 first places from the judges.

Unusually for Florida events, there was very strong showing in the junior and youth divisions.  Watch out for a report on these, coming soon in our Happy Feet section.

This ended a very large and successful year for the South Open in what has been a very difficult year for the dancesport industry. Let’s hope for a better year in 2021!!

It’s full speed ahead here at the JW Marriott in Orlando for the 2020 South Open Dancesport Championship, organized by Sid Pocius.

This might be 2020 and the year our dance world almost ground to a halt, but it’s hard to tell here in Orlando. South Open has witnessed a huge increase in entries this year with pro-ams competing most of the days in a split ballroom. But there seems to be plenty of room in this very large room and the organizer even added extra flooring for today’s events.

View the embedded image gallery online at:
https://dancebeat.com/m-blogs-en/item/1898-southopen20#sigProId215c4f2fb0
Some competitors are choosing to wear their masks throughout while others are not. Officials are masked at all times. Perhaps this is how our competitions are going to look for the foreseeable future.

As we said, pro-am entries are huge, but the pro heats are also some of the largest we’ve seen this year post March.

View the embedded image gallery online at:
https://dancebeat.com/m-blogs-en/item/1898-southopen20#sigProIdb92274731e
As is often the case in today’s events, the Professional Smooth was the largest open division – last night beginning with a very high standard quarter-final that featured several new and promising couples. The top six featured 3 US national finalists from 2019 and this group began with the 2019 (and still current) US Champions, Nick Cheremukhin & Viktorija. They won the event but the result was closer than they might have expected. They won the first 3 dances and placed 2nd in VW. They received 10 of the 15 available first places in waltz and 9 in each of the tango and foxtrot. Surprisingly to us, they had some scores in the lower half of the final from a couple of judges. The runners up, 2,2,2,1, were Roman Malkhasyan & Galina Detkina. They received 5 firsts in waltz, 6 in the next two dances and won the VW by 8 to 7 firsts. 3rd in all dances went to Sergey Samchynskyy & Yulia Besarab. They were 3rd in all dances and had a large majority of “3rd or better” scores. The “chasers” in the final were led by Jang & Adele Don who scored 4,5,4,4. 5th and 6th places went to two of the new partnerships - 5th to Oleksiy Pigotskyy & Anastasiia Zhuchenko 5,4,5,6 and 6th to Dmitrii Zavialov & Arina Sokolova 6,6,6,5, they had won the RS the night before. We would also like to note Peter Minkov & Yuliia Sorokata, another new partnership who were the next couple into the final. You may remember Peter as a successful competitor in the Ballroom division some years ago.
View the embedded image gallery online at:
https://dancebeat.com/m-blogs-en/item/1898-southopen20#sigProIdf1a1244167
The other featured division last night was the Open Pro Latin. The winners in all dances were Andrei Kazlouski & Asta Sigvaldadottir (the US Champions in 2017). They had the majority of firsts in all dances and we felt they had a very strong night, looking relaxed and strong following this difficult year. There was a little shuffle in form next as Sasha Althukov & Cheyenne Murillo improved their standing over 2019. 2019 US finalists, Artur Tarnavskyy & Anastasiya Danilova were the eventual runners-up, scoring 2,3,2,2,3, but Sasha & Cheyenne pushed them hard 3,2,3,3,2. Pasha Stepanchuk & Gabrielle Sabler were 4th in all dances. Andriy Besyedin & Amanda Besyedin, the RS champions from the night before, were 5th 6,5,5,5,6 and Ivan Kudashev & Ksusha were 6th 5,6,6,6,5.
View the embedded image gallery online at:
https://dancebeat.com/m-blogs-en/item/1898-southopen20#sigProId3d28d307c9
This packed evening ended with the Mary Gill Professional Showdance, presented by Mary’s daughter, Linda. With 11 of the available 15 first places, Roman Malkhasyan & Galina Detkina were the winners with a “sexy” foxtrot performed to “Harlem Nocturne.” We speculate that this would have been their showdance routine prepared for Ohio Star Ball. This was true of several of the 7 couples. Runners-up were Ivan Kudashev & Ksusha who are always strong in the showdance genre. Daniel Hustiuc & Jessica Li were 3rd; 4th Artur Tarnavskyy & Anastasiya Danilova; 5th Aleksei Smirnov & Daria Smirnova; 6th Antonio Nunez & Oxana Kashkina; 7th Dmitry Krasnyanskiy & Esther Frances.

It was a varied night of entertainment here at South Open that also featured live vocal and dance performances, special pro-am performances by Mary Coombs and a special presentation to her husband Joe for his support of dancing throughout the country.