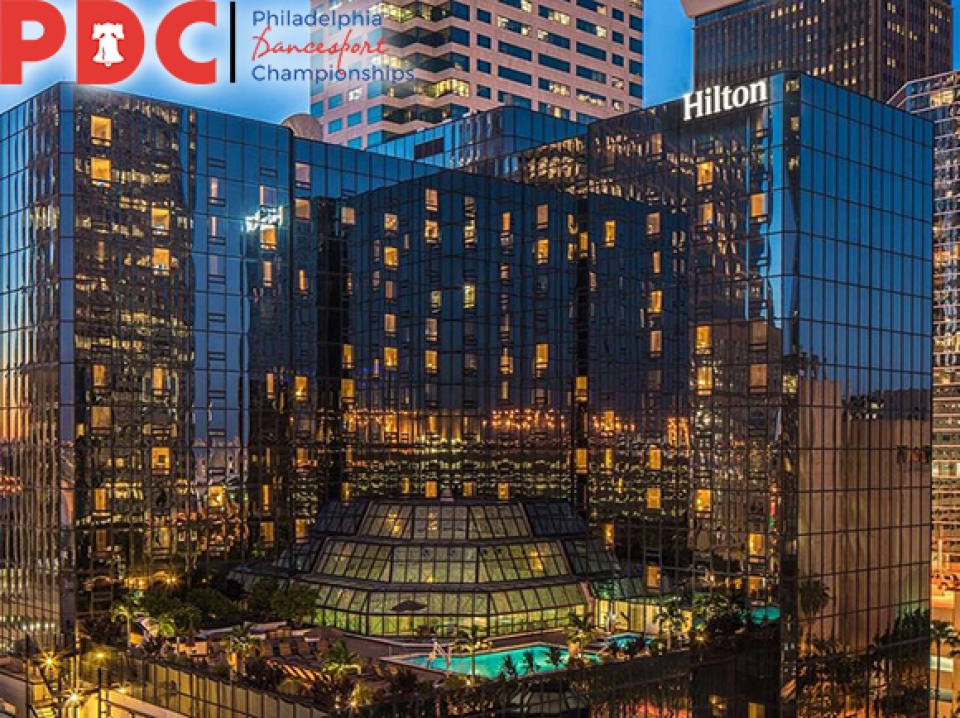 Philly Ends with a Bang!

The Philadelphia Dancesport Championships ended Saturday night, April 10th 2021, with a bag of exciting Ballroom competition and in many of the heats we witnessed plenty of sparks and bangs!

View the embedded image gallery online at:
https://dancebeat.com/m-blogs-en/item/1920-philly21#sigProId79ac969649
The Open Professional Latin for one had the dynamic duo of Troels Bager & Ina Jeliazkova, getting a great welcome from the audience who clapped and cheered as they went along the four sides of the ballroom floor. Ina & Troels won the competition with perfect scores in four dances and almost perfect score in the jive where Bill Sparks delivered the only second of their score sheet. It was also a fabulous night for Manuel Favilla & Natalia Maiduk who took second placed overall 3,2,2,3,2, but in our opinion managed to deliver a terrific performance one we had not seen from this talented couple in years. Arthur Tarnavskyy & Anastasia Danilova danced quite well but with very little challenge to Manuel & Natalia from where we stood. In a few dances they did make a compelling case but in at least 2 of their dances they did not meet the judges’ expectations. Daniel Hustic & Jessica Li were fourth 4,5,4,5,4 with a squeaky clean delivery. Andriy & Amanda Besyedin placed fifth 6,4,5,4,5, however, we felt that Dmitry Demidov & Joanna Meller had a more compelling case for that position even though they were only awarded fifth in the cha cha and sixth went to them in all the other dances.
View the embedded image gallery online at:
https://dancebeat.com/m-blogs-en/item/1920-philly21#sigProId157fd79665
The Professional Cabaret had a huge entry with seven couples in this final, seven very interesting and very accomplished performances. Travis & Jaimee Tuft gave the best delivery and for us possibly one of their best performances, not because they have improved so much above the rest, because that we feel was there already, but because they danced to a track without vocals, allowing nothing to get in between the viewers and the magical skills they have. This time we did not need to hear a singer tell us what they were feeling, this time for us they did the interpretation and should we say the singing themselves (Lovely Performance). Second went to Clifton & Mar Sepulveda, who did a very intricate performance with some incredible lifts, although we have to give them credit for some of the interesting and difficult lifts we must say that overall the performance was not 100% secure. It always left us feeling a little doubtful the lifts were going to get through. We would love to see them develop this number but with little or no room for fault where everything gets nailed comfortably 100%. Third went to Stanishlav Morozov & Kseniia Tashkmova, Igor Puzhevich & Tetyana Makarento were fourth, Paul Leone & Rebekah, Fedor Artemen & Ekaterina Arteneva were sixth and Alexey Smirnov & Durina Smirniva placed sventh.
View the embedded image gallery online at:
https://dancebeat.com/m-blogs-en/item/1920-philly21#sigProId826be886a0
The Open Professional Ballroom was also great to watch with Rudy Homm & Katia Kanevskaya at the helm taking first in all dances with perfect scores in all dances. Second was awarded to Florin Vlad & Natalia O’Connor in all dances and third in all dances went to Luca Balestra & Krizia Balestra. Mirko Spano & Pamela Romano followed followed with fourth in all, fifth overall went to Casey & Kayci Treu 6,5,5,5,6, and Aleksandr & Aida Skriptsov were sixth overall 5,6,6,6,5.
View the embedded image gallery online at:
https://dancebeat.com/m-blogs-en/item/1920-philly21#sigProId35f00da2fc
In the Open Professional Smooth Travis & Jaimee Tuft won this event also and took two of the dances with perfect scores but in the other two, although they won, they did not take perfect scores. Francesco Flumiani awarded two seconds, one in the tango and one on the foxtrot, the other second place mark for them came from David Elkin in the Foxtrot. For us even though the runners-up, Nikolai & Sarika Pilipenchuk, have an exiting charisma, they still lack some of the consistency of work to win over all the judges. However, they were very deserving of the runner-up position on this outing. Third in all dances went to Dmitri Zavialov & Arina Sokolova, for us a wonderful choice for this position the gentleman is perhaps one of the most talented male dancers in the industry and the lady he is now dancing with is very capable and we look forward to seeing even better from them on future outings. Fourth in the Smooth went to Volodymyr Barabash & Yulia Rudenco placing fourth in all dances, this is also a very talented and exiting couple to watch out for on future outings, and they placed fourth in all dances. Fifth overall were Alexander Romanov & Anna Blagodyreva with these marks 6,5,5,6, and sixth was Artem Merenkov & Valeria Vasilchenko 5,6,6,5.
View the embedded image gallery online at:
https://dancebeat.com/m-blogs-en/item/1920-philly21#sigProId1f666b9cbf
The Rhythm went clearly to Andre & Natalie Parmonov who won all dances with the majority of firsts in all dances. Andrew Escolme & Amy Baker placed second in all dances very deservedly as well and in all dances. With the exception of the Bolero they managed to steal a few firsts from Natalie & Andre. This was a very exciting competition with very capable couples and we are sure it was quite difficult from here down. Shandor Shefil & Evgeniia Elcoro took third overall 3,3,3,3,4; Kevin Ubillus & Milagros Lareto were fourth overall 4,4,4,4,3; Eddie Rivera & Jailene Espinosa took all fifths; Igor, Puzhevich & Tetyana Makarenko were sixth 6,6,6T,7,7, and Alexey Smirnov & Daria Smirnova placed seventh 7,7,6T,6,6.
View the embedded image gallery online at:
https://dancebeat.com/m-blogs-en/item/1920-philly21#sigProIdcf63c6a831
In the Under 21 event there was some excellent competition and here Dave Firestein & Kennedy Eaton won the Latin competition - a terrific performance for this young couple and we look forward to seeing more of them. Arsen Havryshchuk & Stella Zilberberg were second in all dances and Kristers Smits & Shelly Umansky were third. In the Under 21 Ballroom Parley Ford & Elizabeth Thomson took all firsts, Matthew Matusovskiy & Nicole Klavansky were overall second 2,3,2,2,3, and third overall was awarded to Benson & Lucy Maier.

As usual the event ended with one of organizer, Chuck Danza’s famous after-parties, something everyone always looks forward to! Next year, all being well, we hope to see the Philadelphia Dancesport Championships actually back in Philadelphia although we’re sure sunny Tampa was a nice change for our northeastern colleagues!

Going to the Mountain!

There is the old saying “If the mountain will not come to Muhammad, then Muhammad must go to the mountain.”

As most of you know Covid-19 has affected all business dealing with people and so it has been hard for our industry because we are a “peoples” activity and all have come to a halt in most states. Philadelphia Dancesport Championships wanted to run this year but the State of Pennsylvania was not having it, so Philadelphia moved to Tampa, FL for a weekend of sun, fun and dance. With the exception of the few weeks earlier in the pandemic Florida has never really closed down. Here in our state each city manages its own Covid-19 response, some are quite lenient others are more strict, depends where you go. So here we are at the “FloriDelphia” that also ran virtually for two days earlier in the week and now the full competition at the Hilton, Tampa Downtown.

Last night was a terrific evening of competitive dancing with all open amateur and rising star professional events taking place. The Amateur events were excellent especially the Amateur Latin where six excellent couples made the final, making this evening a fantastic finale to a full day of competitions.

View the embedded image gallery online at:
https://dancebeat.com/m-blogs-en/item/1920-philly21#sigProId4cf57ebfc3
Six very talented couples were called back for the final and once in the final the competition was fierce. Tal Livshits & Ilana Keselman won all dances easily with the majority of firsts in all dances and perfect scores in the paso doble. From there down the marks were all over the place, but in the end Max Firestein & Nicole Renee took second in all dances. We felt that Max & Nicole did have an excellent night but perhaps not always in all dances. For us, Ron Garber & Kaludia Petriti gave a more consistent performance, and they placed third in all dances. Dave Firestein & Kennedy Eaton (and yes that is Max’s brother) placed fourth overall with these marks: 4,4,4,5,4T, and they too gave an excellent performance. One thing we can say is that in this final there was quite a lot of talent, making a bright future for Latin American dancing in the USA and on the world stage. Fifth overall went to Kristers Smits & Shelly Umansky 5,5,5,4,4T, who we felt gave an excellent performance as well. Last in this final went to Oskar Krimus & Shayna McDonald who looked also very promising, with lots of talent but still a little green on this pasture.
View the embedded image gallery online at:
https://dancebeat.com/m-blogs-en/item/1920-philly21#sigProId853b951c1a
In the Amateur Ballroom, Oleksandr Kalenyuk & Olena Ablitsova took first in all dances with perfect scores from the judges. Parley Ford & Elizabeth Thomson were second in all dances and third overall went to Matthew Matusovskiy & Nicole Klavansky 3,3,3,3,4. Fourth was Benson Maier & Lucy Maier 4,4,4,4,3, and fifth was Xingmin Lu & Katerina Lu placing fifth in all dances.

There were two couples in the Amateur Open Ballroom B and this went to Xingmin & Katerina Lu.

It was also a day filled with Pro/Am competitions featuring two styles the Rhythm in the early part of the day and the Ballroom finishing up the late afternoon. Today we are seeing the Smooth and later in the afternoon the Latin leaving the Open Professional styles for this evening’s session.