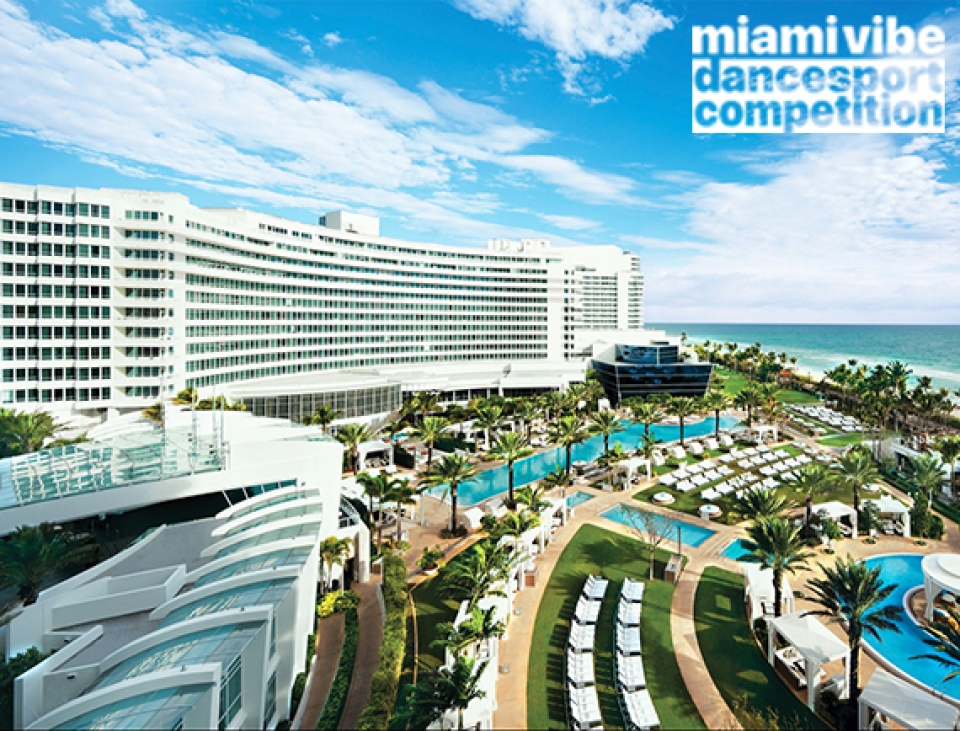 The Days of Future Past

For those of us who have been involved in the American dance scene for more years than we care to remember, have no place more iconic in our memories than the Fontainbleau Hilton on Miami Beach.

It was here that the US Championships rose to world fame as one of the best dance competitions in the world. So when Andrew Phillips chose to run his Miami Vibe competition there in 2021, he was assured the nostalgic amongst would be looking forward to returning. And so it turned out to be! This was Andrew’s largest Miami Vibe to date with more than 8,000 entries. This led to some very long sessions, but this is indeed a problem that many organizers would like to have.

Pro-Am entries were way up in all styles and all four open professional divisions were first class, as was the Open Amateur Latin and many of the Youth and Junior divisions.

Perhaps the two Latin divisions, amateur and professional, stole the show and both were highly contested with the judges showing some widely differing opinions.

View the embedded image gallery online at:
https://dancebeat.com/m-blogs-en/item/1924-miamivibe21#sigProId3e48eb0469
We begin with the Pro division that was held Friday night. The event started with a quarter final, and we had an indication of how close the final result would be when a 7-couple final was announced. From our perspective, there were four couples in contention for the title and indeed they made up the top four placements. Mikhailo Bilopukhov & Anastasiia Shchypilina were the winners and they took all dances, 3 with the majority of 1st places (S,P,J). The best scored dance for them was paso doble where they had 8 of the 13 possible firsts. Basically the majority of the first places were shared between the top 4 couples. Runners-up were Artur Tarnavskyy & Anastasia Danilova and they placed 2,2,4,2,2. The majority of their placements were in the top 3, but they had a few random lower scores and even one 7th place.
View the embedded image gallery online at:
https://dancebeat.com/m-blogs-en/item/1924-miamivibe21#sigProIdfce38c512b
With 3,3,3,4,3, Darren Hammond & Maryna Steshenko from South Africa were third. They had 5 first places in rumba, more than any other couple including the winners. The fourth of these great couples, Manuel Favila & Natalia Maiduk placed 4,4,2,3,4, just 1 point below the 3rd place couple. They had several judges placing them 1st or 2nd also. It was a very tight race. The 2nd place in all dances was decided in the “3rd or better” column. All four couples were a delight to watch and the audience showed great enthusiasm for them all.

5th position went to Nikita Malakhov & Nadezda Vlasova 5,6,5,5,5; 6th were Andriy & Amanda Besyedin 6,5,6,6,6 and 7th were Valentyn Ivanov & Yana Tikhenko. Interestingly, Valentyn & Yana were the only couple other than the top 4 who received any 1st place marks.

Kasia Kozak will report on this division soon.

View the embedded image gallery online at:
https://dancebeat.com/m-blogs-en/item/1924-miamivibe21#sigProIdb03cae175d
If anything, the Amateur Latin was even closer as the nation’s top 3 contenders were in attendance on Saturday night and they shared all of the judges’ first place marks. Coming out ahead tonight were Austin Joson & Nino Dzneladze and they scored 1,1,1,3,2. They received a majority of first places in the 3 dances they won. The result for 2nd and 3rd was decided by a Rule 11 tiebreak that went in the favor of Alexander Chernositov & Ariana Grishanina 2,2,3,1,3 (11 points) over Tal Livshitz & Ilana Keselman 3,3,2,2,1 (11 points). Speaking to knowledgeable audience members after the event, we found very little consensus upon this result. Everyone seemed as undecided as the judges! But that makes for a great competition!

4th in all dances went to Miroslav Randelovic & Dakota Pizzi. Although we are not as familiar with this couple, we found them very impressive and very deserving of this placement. Bumchin Tegshjargal & Michelle Klets, the only west coast couple in the final, were 5th with 5,5,5,6,5 and Yegeni Orlov & Anastasia were 6th 7,6,6,5,6 and Vadym Pidhorestky & Ruby Castro were 7th 6,7,7,7,7. The event began with a semifinal of 13 couples.

Look out for a report on this style by Oxana Lebedew

View the embedded image gallery online at:
https://dancebeat.com/m-blogs-en/item/1924-miamivibe21#sigProId39e2b7de48
Sharing the bill with the Pro Latin on Friday night was the Open Pro Smooth. Nick Cheremukhin & Viktorija, current US Champions, made the trip from LA and were rewarded with the overall win, but they did lose the waltz to the runners-up, Roman Malkhasyan & Galina Detkina. Nick & Viktorija had clear majorities in the 3 dances they won and Roman & Galina also had the majority (7 to 6) in the waltz. These 2 couples had almost all of the 1st and 2nd places between them, the only other couple to steal a couple of the 2nd placements was Nikolai & Sarika Pilipenchuk who were 3rd in all dances. 4th in all went to Jang & Adele Don. 5th were Dmitry Zavialov & Sokolova 6,5,5,5 and 6th, Volodymyr Barabash & Yulia Rudenko 5,6,6,6.

Steven Dougherty will have a full report on this division.

The Open Pro Rhythm and Ballroom were both danced on Saturday night and both began with semifinal rounds.

View the embedded image gallery online at:
https://dancebeat.com/m-blogs-en/item/1924-miamivibe21#sigProIddf0650c4c7
Current US Champions, Andre & Natalie Paramonov, had a fairly easy time with this one taking 1st in all dances with clear majorities in 4 of the dances and a close majority (7 to 6) in the mambo. With 2,2,2,2,3, Dmitry & Olena Nikishkin were the runners-up. They had very clear majorities in the first 4 dances and narrowly lost 2nd in the mambo as they had 7 “2nd or better” scores. The couple that took that 2nd in mambo were Kevin Ubillus & Malegros Lareto 3,3,3,3,2. They had 6 first places in mambo and 1 second giving them also a total of 7 “2nd or better” scores. They took 2nd in a tiebreak. 4th in all dances went to Shandor Shtefil & Evgeniia Elcoro; 5th were Jang & Adele Don 5,5,6,5,6; 6th Riccardo Papi & Sabrina Moretti 6,6,5,6,5.

Inna Ivanenko will report on this division for Dance Beat soon.

View the embedded image gallery online at:
https://dancebeat.com/m-blogs-en/item/1924-miamivibe21#sigProIdd959b6f2c1
Rudy Homm & Katya Kanevskaya also had little trouble in the Pro Ballroom winning all dances clearly, foxtrot and waltz with perfect scores of 13 first places. 2nd and 3rd places went to couples formerly from Italy. Gianni Caliandro & Arianna Esposito got the better of it scoring 3,2,2,2,2 over brother and sister team, Luca & Krizia Balestra 4,3,3,3,3. Luca & Krizia have recently moved to Florida. Atem Belmeha & Anna Shevchenko seemed to puzzle the judges the most as they had quite wide-ranging scores that resulted in them placing 2,5,4,5,5 and an overall 4th place, 1 point ahead of Nazar Batih & Mariko Cantley 5,4,5,4,4. Ivan & Maria Levin, the winners of the Rising Star in this style, were 6th in all dances.
View the embedded image gallery online at:
https://dancebeat.com/m-blogs-en/item/1924-miamivibe21#sigProId981e57e893
5 strong couples entered the Pro Cabaret on Friday night. Shane & Shannon Jensen won comfortably with their new piece "When you Believe" taking 9 of the 11 first places. Easily second were Clifton & Mar Sepulveda also performing a new piece, a dramatic rendering of Nessum Dorma. 3rd were Fedor & Ekaterina Artemev; 4th Stanislav Morozov & Ksenia Tashkinova; 5th Dmitry Krasnyanski & Esther Frances.
View the embedded image gallery online at:
https://dancebeat.com/m-blogs-en/item/1924-miamivibe21#sigProId367ede8a1c
One nice Vibe tradition that remained was the presentation of specially designed jewelry to one of the finalist ladies in each professional style. This is decided by random drawing and the jewelry is presented by the designer, Mariko Dozona. This year there was also a jewelry gift to the winner of the pro-am solo competition that is judged by the audience in a text ballot. This year’s winner was Kim Bors.

The Fontainbleau has always been a vibrant and popular Miami destination and as always, it was humming with activity. The recent lifting of most covid restrictions in Florida meant that the restaurants and clubs were open and for those that wished, late night entertainment was certainly an option.

Once again congratulations to Andrew and his team on their biggest event to date.