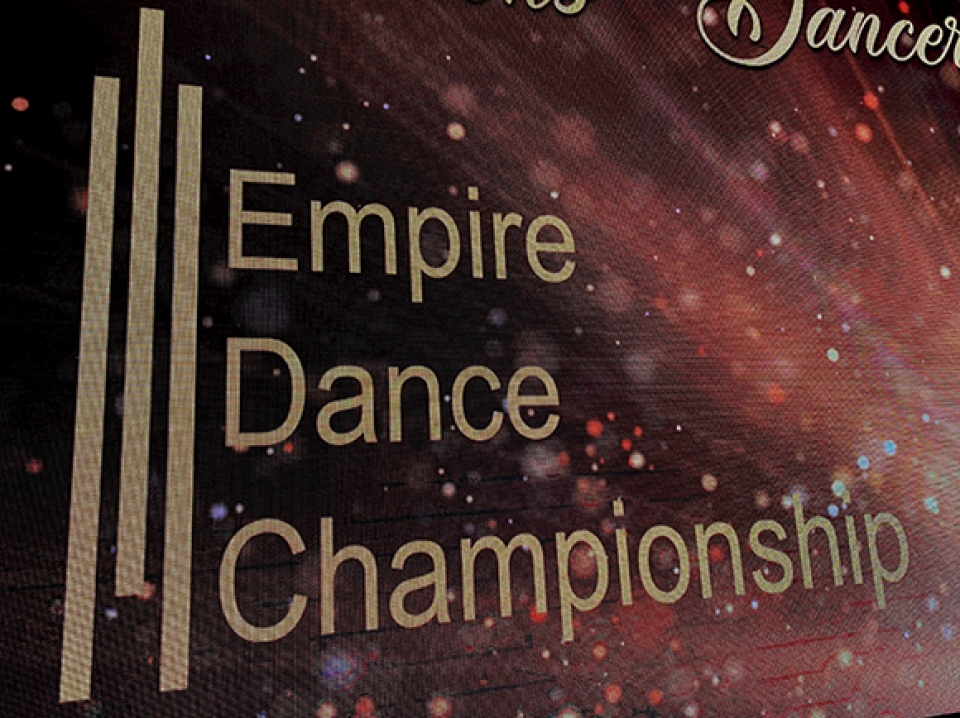 Last Night at the Empire!

The last night at the Empire was possibly not as populated as the other nights prior but it was still filled with talent and exciting competition.

The Professional Ballroom, Rhythm and Cabaret were the feature events and they were for sure worth the ticket here at the Empire State Championships.

View the embedded image gallery online at:
https://dancebeat.com/m-blogs-en/item/1949-empire21#sigProIdb4538cd52b
In the Ballroom it was a walk in the park for Rudy Homm & Katia Kanevskaya who won all dances with the majority of firsts in all. It was certainly a pleasure to watch them dance and for us even more special because we are totally fans of Katia who we continue to think is one of the best ladies in the USA in this style. Another couple we too enjoy in this final was Andres & Veronika End, who placed second overall but not in all dances, their foxtrot second place escaped them and they took third in this dance. The foxtrot second position went to the new partnership of Andrii Mykhailov & Ekaterina Popova who took third in all the remaining dances. For us these last two mentioned it was a matter of taste, their styles are completely different one is more traditional than the other and we can almost say, that ether couple could have taken that second position.

Fourth went to Nazar Batih & Mariko Cantley 4,4,4,4,5, we think this is perhaps the most improved couple in this final and we are sure they will be challenging even more on future outings. Fifth place went to Mirko Spano & Pamela Romano 5,5,5,5,4, and sixth was awarded to Artem Belmeha & Anna Shevchenko.

View the embedded image gallery online at:
https://dancebeat.com/m-blogs-en/item/1949-empire21#sigProId492a5d30d9
The Professional Rhythm was also a terrific heat and here the couples got to do a dance-on of Mambo with the percussion music of Brent Mills and Eddie Melendez, from the audience position everything went as well as it looked, but behind the scenes, a few of the Rhythm couples felt that the percussion alone sounded more like a samba than the mambo. If they felt this, it was never displayed it looked great from where we where standing. Andre & Natalie Paramonov won the competition easily with a full majority of firsts in four dances and perfect scores on the rumba. As usual it is a pleasure to watch this dynamic couple dance. Their musicality is amazing and they truly dance to whatever is played. As we have mentioned in the past, they may not change choreography at every round but they sure change attitudes and interpretation depending on what music they get, great job Andre & Natalie!
View the embedded image gallery online at:
https://dancebeat.com/m-blogs-en/item/1949-empire21#sigProId56204dbfbd
The fight for us was between Andrew Escolme & Amy Baker and Dmitry & Olena Nikishkin for second place. In the end for the judges it was clear, Dmitry & Olena were their pick for second position, leaving third to Andrew & Amy. Here also we feel that their styles are completely different and that in the end it’s up to every judge’s interpretation how they see it on the night. Fourth overall but not in all dances went to Ilya Abdullen & Anastasija Jerjomina 4,4,4,4,5, as you can see their mambo from the judges perspective deserved a fifth position finish, lucky for them their other four dances were solid fourth position.

We are pleased to report that the partnership of Kristian Sese & Mae Lozada is back in full swing and ready to go towards the US Championships coming up in September. The last performance we witnessed from this couple was not their best effort and it looked way out of play, but on this night they were on especially Kristian who was going full out, just him his partner and the music! oOn this outing they were fun and easy to watch, these were the marks from the judges 6,5,5,5,4, as you can see their mambo was excellent and we can attest to that. Sixth in this final was awarded to Ryan Lewis & Megan Mendoza and here to we are happy to report that they were in great Rhythm mode. This couple have a very unique style and when they allow it to come out they have some very interesting approaches to the style; I know that once they work out all the kinks, they should be challenging for top placement on future outings.

View the embedded image gallery online at:
https://dancebeat.com/m-blogs-en/item/1949-empire21#sigProId0b047d1792
The Professional Cabaret was the perfect finish to the Empire, all couples were interesting to watch many with great choreographies and music. The winner clearly for us and the majority of the judges were Craig Smith & Andrea Harvey, who only lost 3 marks of the 15 judges. The work that Craig & Andrea do is out of this world and the level of difficulty is unbelievable, the ease of lift work, entrances and exits, are to be admired, and last night’s performance was almost perfection. Second overall went to Clifton & Mar Sepulveda, another amazing couple, who have what it takes to challenge the top. However, for us Clifton & Mar lack some basic ideas management. Like the music, beautiful music you want to hear on the radio but had it been heard too much by us the audience and somehow our expectations as set? In this style you have to go way out on a limb - you win or lose but it must be on the limb not just material and music that would keep you close to the top but will not secure you a win.

Third went to another terrific routine performed by Nikita Zhukovskyi & Angelina Boiko, they did a version of the Austin Powers song and movie. This was super clever and quite funny, unfortunately funny is always difficult to get through. On last night’s performance we think this to be the perfect position for this performance. Andrey Kitsun & Zoya Altmark took fourth place with an Argentine tango, fifth position was awarded to Stephan & Eliza McCann, who performed a Scottish flavored routine including some folklore in it and it was well received. Last with a brand new routine and very first showing were Nazar Batih & Mariko Cantley, once again it had a little funny, but they also managed to include some terrific dancing with it.

As we said, this was the perfect category to finish this terrific Empire State Championships, our congratulations to Vibeke Toft, Allan Tornsberg, Giampiero Giannico and Katerina Marks, for organizing this Championship for all of us to enjoy!

The Empire Strikes Back!

After a year of waiting due to Covid-19 and all the restrictions put on gatherings, the Empire Dance Championships are finally in full swing but not in their usual location “Times Square, NY City” but across the river in New Jersey, Jersey City, at the Westin Jersey City Newport.

So far we have had two full days of Pro/Am dancing and one very special night with a gala and one of the best Amateur Latin Championships in USA today.

View the embedded image gallery online at:
https://dancebeat.com/m-blogs-en/item/1949-empire21#sigProId5c2c8168db
The gala as usual was a wonderful mix of fun, general dancing, shows and the excellent Amateur Championship where the lineup was a who’s who of Amateur Latin. In the end Austin Joson & Nino Dzneladze won the event but not all dances, they placed first in four dances and second in the Samba where Aleksander Chernositov & Arina Grishanina placed first. This was a wonderful duel between these two couples and we would not have been surprised if Aleksander & Arina had taken a few more dances or even the Championship altogether. Third in all dances was awarded to Tal Livshits & Ilana Keselman, a clear placement for this couple, that only managed to steal a couple of firsts from the winners, we have to point out that the majority of firsts taken away from Austin & Nino went to Aleksander & Arina.

View the embedded image gallery online at:
https://dancebeat.com/m-blogs-en/item/1949-empire21#sigProId1c76a09848
The Amateur Championship was fantastic but what really gave it the final touche was the percussion of Brent Mills and Eddie Melendez. All dance on’s were done with live precursion Brent on the timbales and Eddie on the drums. The second attraction that made this gala a very special evening was the show by Max Sinitsa and Tatiana Selevirstova, apparently this competition is where they met and tried out so it was a special place for them, and the show did not disappoint. The show the drums and the dancing made this an unforgettable evening of entertainment.
View the embedded image gallery online at:
https://dancebeat.com/m-blogs-en/item/1949-empire21#sigProId955ce7c760
Last night the open professional events began and it too made for a fantastic night of ballroom dancing with the Open Professional Latin and Smooth running back to back. The Professional Latin, like the amateur, was a show stopper with three of the top US couples in the line. Troels Bager & Ina Jeliazkova took first in all dances and with perfect scores in four dances and nearly perfect scores in the jive, we say nearly because they got one second place from Izabella Lewandowski in this dance. Second in all dances was awarded to Andrei Kazlouski & Asta Sigvaldadottir who also got the majority of seconds in all dances, leaving third to Mykhailo Bilopukhov & Anastasiia Shychypilina.

From fourth place down the judges had more mixed scores and you will see it reflected in the couples’ marks. Fourth was awarded to Manuel Favilla & Natalia Maidiuk with these marks 4,5,4,4,6. Fifth went to Valentine Voronov & Anna Pelypenko from Canada 5,6,5,5,5, sixth was Artur Tarnavskyy & Anastasiya Danilova 6,4,6,6,4, and seventh place in all dances was awarded to Pasha Stepanchuk & Gabriella Sabler.

View the embedded image gallery online at:
https://dancebeat.com/m-blogs-en/item/1949-empire21#sigProId261c68001d
The Open Professional Smooth was equally a fine event and here Roman Malkhasyan & Galina Detkina won all four dances with perfect scores in all dances. Second in all dances was awarded to Nikolai & Sarika Pilipenchuk, but when you look at their scorecard they lost a number of second places to Aleksandar Vukosavljevic & Aleksandra Smirnova who placed third in all dances. From this position down things got a little more shifty. Fourth were Kharyton & Anasatasiya Khomenko 4,4,5,4, fifth went to Tykhon & Yana Zhyvkov 5,5,4,5, and sixth in all was awarded to Volodymyr Barabash & Yulia Rudenko.
View the embedded image gallery online at:
https://dancebeat.com/m-blogs-en/item/1949-empire21#sigProId89ca064bd1
The Open Amateur Ballroom also took place this evening and it was a good event but not with the same amount of punch the Latin had. Here first place in all dances went to Canada’s Nikita Druzhynin & Virginie Primeau, second was Eric Newbury & Evgeniya Gorobets 2,3,3,2,3, third went to Erik & Shelly Linder 3,2,2,5,4, in fourth place were Jaren Hopkins & Vashti Smith 4,6,4,3,2, fifth was awarded to Jonathan Liu & Oleksandra Basko 6,4,5,4,6 and sixth was Parly Ford & Elisabeth Thomson 5,5,6,6,5.

Tonight we will see the Professional Ballroom and American Rhythm and it promises to be another great night of Ballroom dancing.

The Pro-Am Ballroom divisions in the afternoon were very strong, and here are the results of the Open Scholarships.