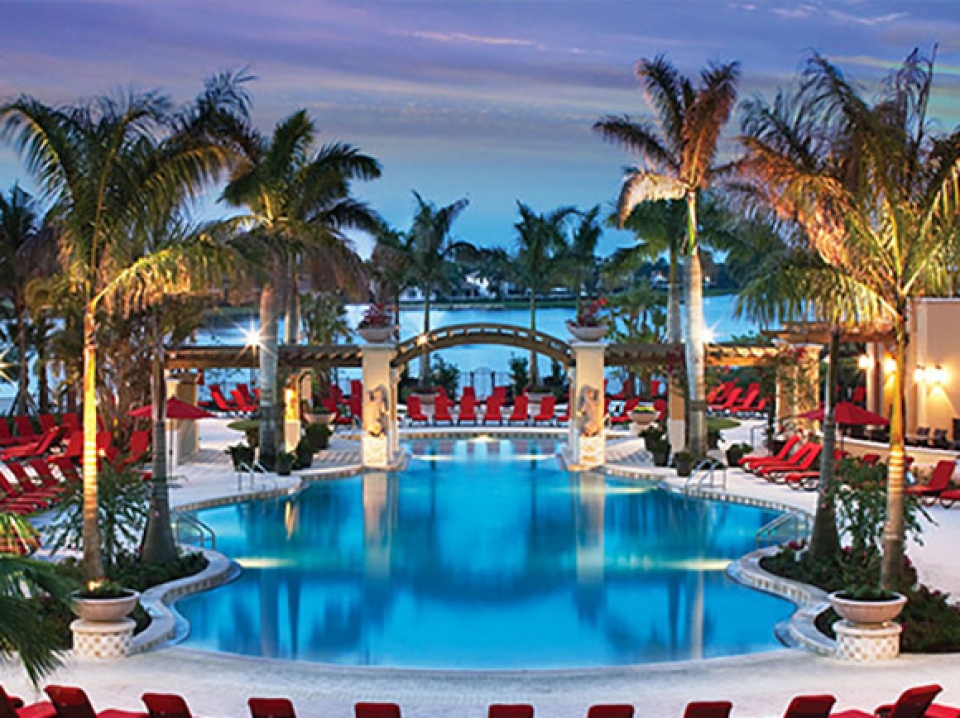 The Boca Ballroom Dancesport Competition was held once again at the PGA Resort in Palm Beach Florida.

Although a nick and tuck is being done to the hotel to bring it to the best standards of the day, the attendees all managed to enjoy a few days in the sun at the beautiful poolside. Meanwhile, inside the ballroom, there were plenty of challenges in all levels and categories in two and a half days of competitions.

View the embedded image gallery online at:
https://dancebeat.com/m-blogs-en/item/1952-boca21#sigProIdb6cbb8d837
Yesterday the festivities concluded with the Professional Ballroom and Rhythm categories. In the Rhythm first place went to US National Professional Champions Andre & Natalie Paramonov who gave an excellent performance. Second in all dances was awarded to Dimitry & Olena Nikishkin, third in all dances was awarded to Shandor Shtefil & Evgeniia Elcoro. Fourth were Dymytrii Goncharov & Veronika Shapar but not in all dances - in the cha cha they placed fifth, fourth in that dance and placing overall fifth were Jake Davies & Alyona Kalinina who formally danced Latin and now have the switch to the Rhythm style. And in sixth position were Stanislav Morozon & Keseniia Tashkinova, placing sixth in all dances. The event began with a semifinal.
View the embedded image gallery online at:
https://dancebeat.com/m-blogs-en/item/1952-boca21#sigProId44068d6adb
The Open Professional Ballroom also took place this last night of competition and here the winners were Luca Balestra & Krizia Balestra placing first in all dances. From here on the scoring got a little more blurry. Second place overall went to Aleksei Alekseev & Ekaterina Derevleva with these scores 2,3,3,4,2. Third were Alexey Grinev & Kseniia Grineva 4,2,2,3,4, fourth went to Anton Silantev & Olga Akopova 3,4,4,2,3, fifth in all dances were Alexander Elsbury & Grace Gallagher, leaving sixth in all dances to Ramon Martinez Campos & Ersi Nie.
View the embedded image gallery online at:
https://dancebeat.com/m-blogs-en/item/1952-boca21#sigProId4bc8a8d1ca
On the same night 4 professional couples entered the Theatre Arts & Cabaret Theatrical division and in the end first place overall was awarded to Stanislav & Keseniia Tashkinova, second were Nikita Zhukovskyi & Angelina Boiko, third was awarded Alexey Grinev & Kseniia Grineva and fourth went to Anton Silantev & Olga Akopova.
View the embedded image gallery online at:
https://dancebeat.com/m-blogs-en/item/1952-boca21#sigProId13c4a2bcd9
There were also 2 Pro Rising Star divisions on this evening. The Smooth was a very exciting and highly contested division that resulted in a Rule 11 tiebreak decision with the win going to Volodymyr Barabash & Yulia Rudenco over Dmitrii Zavialov & Arina Sokolova. In the Latin Andriy Besyedin & Amanda Besyedin were the easy winners.
View the embedded image gallery online at:
https://dancebeat.com/m-blogs-en/item/1952-boca21#sigProId880e6a0d3c
In the Professional Smooth the night before, first in all dances with the majority of firsts in all dances went to Aleksandar Vukosavljevic & Alexandra Smirnova , second in all dances was awarded to Dmitrii Zavialov & Arina Sokolova and third were Artem Merenkov & Valeria Vasilchenko. Fourth overall went to the new partnership of Pavel Lebedev & Ekaterina Romanshkina with these scores 4,4,5,4. Fifth was awarded to Alexander Elsbury & Grace Gallagher 5,5,4,5, sixth went to Anton Silantev & Olga Akopova 6,7,6,6, and in seventh place were Dmitry Krasnyanskiy & Esther Frances 7,6,7,7.
View the embedded image gallery online at:
https://dancebeat.com/m-blogs-en/item/1952-boca21#sigProIdf18294d202
Artur Tarnavskyy & Anastasiya Danilova won the Open professional Latin with a majority of firsts in 3 dances and the rumba and cha cha with perfect scores. Second went to Andriy Besyedin & Amanda Besyedin and they took second in all dances. Third was awarded to Aleksei Alekseev & Ekaterina Derevleva, fourth went to Kirill Netsvetaev & Aleksandra Antonenko. Fifth was Anton Silantev & Olga Akopova but not in all dances 5,6,5,5,6, and sixth overall was awarded to Alexey Grinev & Kseniia Grineva 6,5,6,6,5.
View the embedded image gallery online at:
https://dancebeat.com/m-blogs-en/item/1952-boca21#sigProIdbff78b020c
In the 2 Rising star events held on this night, Alexey Grinev & Kseniia Grineva won the Ballroom and Dymytrii Goncharov & Veronika Shapar won the Rhythm.

Although we are yet to be clear of this past years COVID troubles, it is great to see so many events coming back and many of them in full swing. We look forward to continuing to report through the summer on so many upcoming events including this year’s US National Championships from Orlando Florida. Our congratulations to the organizers Mark Nocera and Helle Rusholt Yi for a very successful event.