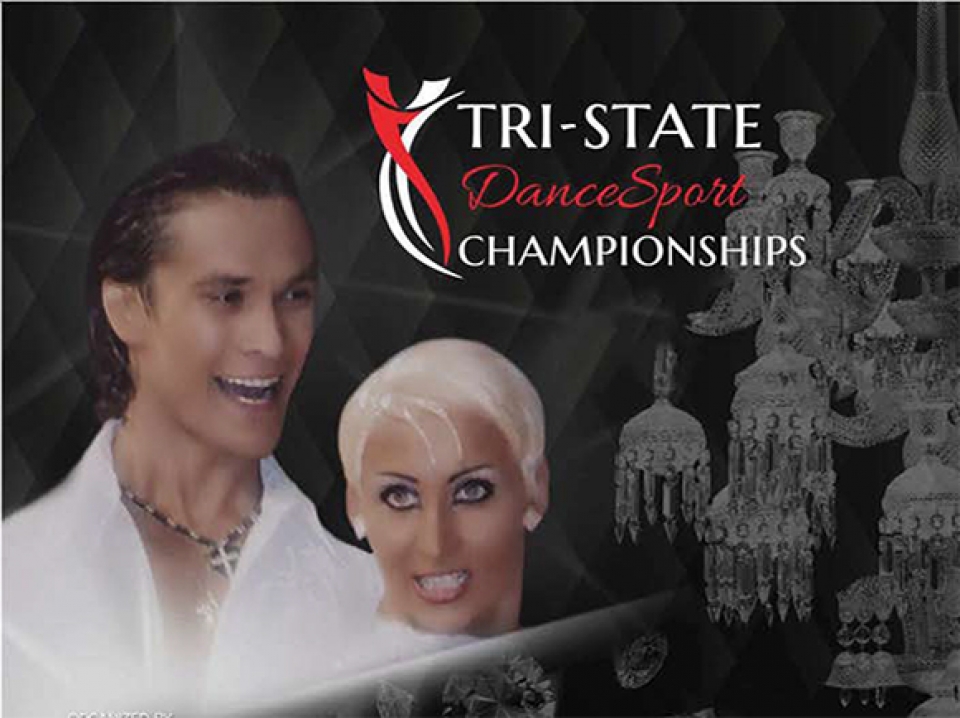 View the embedded image gallery online at:
https://dancebeat.com/m-blogs-en/item/2029-tristate22#sigProId22597d852d
But before we get to that final conclusion to this year festivities, there were three other events that are totally worth a mention - the Open Amateur Latin that was out of this world, the Open Professional Rhythm and the Open Professional Ballroom.
View the embedded image gallery online at:
https://dancebeat.com/m-blogs-en/item/2029-tristate22#sigProId36e9b1a63e
In the Open Amateur Latin from the semifinal you could tell this would probably be the best heat of the evening schedule and it sure was, it was an electrifying heat from beginning to end. In the final two couples were clearly going head to head for first place - Tal Livshitz & Ilana Keselman and from Spain, Joel Lopez & Kristina Bespechova, they are both excellent Latin dancers with two totally deferent brands. To us Joel & Kristina looked a little more solid and experienced in comparing them to Tall & Ilana, but apparently this was not the judges’ thoughts on this night. Tal & Ilana won this championship and all dances quite easily with a majority of firsts in all dances. We can ot say that Tal & Ilana were no match for Joel & Kristina because they were and they are one of the three best couples in the USA Amateur Latin, but from the sidelines on this night we found the maturity and artistry of Joel & Kristina more appealing to our eyes. We must also point out that out of 13 judges, 4 and 5 in the rumba had the same thoughts as we had and marked Joel & Kristina to win.
View the embedded image gallery online at:
https://dancebeat.com/m-blogs-en/item/2029-tristate22#sigProIdbb63faafd9
Third in this excellent Latin final went to one of our favorite couples of this style, Vadym Pidhoretskyy & Ruby Castro, and we totally agree with the judges on this call they were placed solidly third from the majority with only a judge or two marking them second or less than third. What we love about this couple is their quality and simplicity of work. Fourth place went to Idan Daich & Anastasia Sinyauskaya and they took fourth in all dances, fifth overall was awarded to Kristers Smit & Shelly Umansky with these marks 5,6,5,6,5, and sixth went to Danny Zhelasko & Eva Tulchinsky 6,5,6,5,6.
View the embedded image gallery online at:
https://dancebeat.com/m-blogs-en/item/2029-tristate22#sigProId402e0e1ec2
While we are speaking of Latin dancing we most also congratulate Vadym Pidhoretskyy & Ruby Castro for winning the Under 21 Open International Latin Championship. This Championship was also the third qualifying event for the “Under 21 Ballroom Spirit Latin Tour.” However, Vadym & Ruby had previously qualified for the tour at the Ohio Star Ball under 21 Championship and so the qualifying couple this time will be Maksym Rodionov & Daria Karpukhina from Miami, who placed second in every dance to Vadym & Ruby. Congratulations to Maksym & Daria and we look forward to seeing them at the finale at the DBDC in Boston MA this coming July!
View the embedded image gallery online at:
https://dancebeat.com/m-blogs-en/item/2029-tristate22#sigProIdc68eaea32f
Winning the Open Professional Rhythm with perfect scores from all the judges was Dmitry & Olena Nikishkin, this was their night and even in the Best of the Best they managed to capture second out of five styles and steal a few firsts from the winners. Second in this Rhythm heat went to Ivan Sovetov & Valeria Mkrtchian, who took second in all dances. Ivan & Valeria’s physical skill is quite advanced, we just would like to see more “rhythm” added into their movement. At the moment it looks like pretty pictures in an album. Third was awarded to Michael Ulbrich & Lindsey Melville, here they could use clearer lines and isolation and a little less shimmy. And in fourth position overall was Jose Zuquilanda & Annie Rockhill 4,5,4,4,4, and fifth place went to Donovan Kirrane & Olga Goncharova.
View the embedded image gallery online at:
https://dancebeat.com/m-blogs-en/item/2029-tristate22#sigProId0c76c1b8ff
The Professional Ballroom was a very small affair with only three couples competing in this championship. This heat, even though small, had some interesting dancing and for us as you will see was a very contested heat. Igor Mikushov & Valeriia Belozerova won with these marks 1,2,2,1,1; second was awarded to Florin Vlad & Natalia O’Connor 2,1,1,2,2, and third in all dances was awarded to Artem Belmeha & Anna Shevchenko.

With this the 2022 Tri-State Dancesport Championships came to a conclusion, it trully was a wonderful experience and treat for this tri state area, the decoration alone are worth the trip!

A very Close Match at TriState!

The Open Professional Latin at the TriState Championships was such a close match that it all hung on just one mark.

View the embedded image gallery online at:
https://dancebeat.com/m-blogs-en/item/2029-tristate22#sigProIdc533d46609
We do have to agree that Manuel & Natalia danced as we have never seen them dance, however, for us in clarity of work, Pasha & Gabrielle had the upper hand. We suppose that was not enough to get them over the line, and over Manuel & Natalia’s passionate performance. Manuel & Natalia won 3 dances the C,R,P and Pasha & Gabrielle won the samba and jive.
View the embedded image gallery online at:
https://dancebeat.com/m-blogs-en/item/2029-tristate22#sigProId833c50838f
In another very exiting maneuver, Kostiantyn Samarskyi & Anna Oblakova placed third overall 3,3,4,4,3, and although we were a little surprised that they were able to overpower the consistant performance of Amanda & Andriy Besyedim who came in fourth 4,4,3,3,4, but we figure it might just be a matter of time. Kostiantyn is a fantastic male dancer with great quality of movement and Anna complimented their every move. However, the consistency of Andriy & Amanda is usually hard to beat.

Ilya Ivanov & Yana Tikhenko took fifth 5,5,6,5,6, and Dmitry Baron & Sarina Write were sixth 6,6,5,6,5, and we totally applaud this decision, Ilya & Yana really got down to dancing while Dmitry & Sabrina just posed a lot.

View the embedded image gallery online at:
https://dancebeat.com/m-blogs-en/item/2029-tristate22#sigProId112ff096b7
The Professional Smooth was also quite a treat with former US Champions, Nick Cheremukhim & Vika Vicktorija, competing and winning every dance with nearly perfect scores in all dances. Nick & Vika lost only two marks in the waltz, one mark in the tango, three marks in the foxtrot and three marks in the Viennese Waltz, and they certainly stole the show and got everyone’s attention. We felt that second and third was possibly a little more contested especially the two waltzes, here Travis & Jaimee Tuft took second in all dances and Aleksandar Vukosavljevic & Alexandra Smirnova placed third in all dances. Earlier we mentioned that this second position perhaps could have been a little closer and in looking at the marks we were not surprised to see that a number of judges did award second to Aleksandar & Alexandra and yes the waltzes got the most marks for them. They received two second place marks in the waltz and three second place marks in the Viennese Waltz. The surprise for us was that they also took a few second places away from Travis & Jaimee in the tango and the foxtrot.

Fourth in this excellent Smooth professional heat and in all dances went to Kirill Gorjatsev & Daria Zotova, fifth was awarded to Dave Hannigan & Stephanie Betts, although we feel that Dave & Stephanie were totally worthy of being on this final, we do think this was a great position awarded to them, we though with the amount of talent these two have, we would have seen a little more dancing and not just running around. We do think that in this couple we have a great combination for something great. Sixth position in all dances went to Dmytro Pohybil & Alona Kushnir.

View the embedded image gallery online at:
https://dancebeat.com/m-blogs-en/item/2029-tristate22#sigProId9f3d85653e
The Amateur Ballroom was a small affair but it was a no contest for Samuel Hacke & Katerina Hermanova to win this Championship, and with a majority of firsts in every dance. Second went to Vladyslav Komolkov & Alexandra Sevastianova from Canada, third went to Brandon Klavansky & Karolina Lokaj, fourth was Xingmin & Katerina Lu, and fifth went to Christian Testa & Amanda Hutter.

Tonight we have another terrific night of dancing including the Open professional Rhythm and the Open Professional Ballroom and to conclude a best of the best competition for all amateur and professional events, we look forward to this challenge tonight