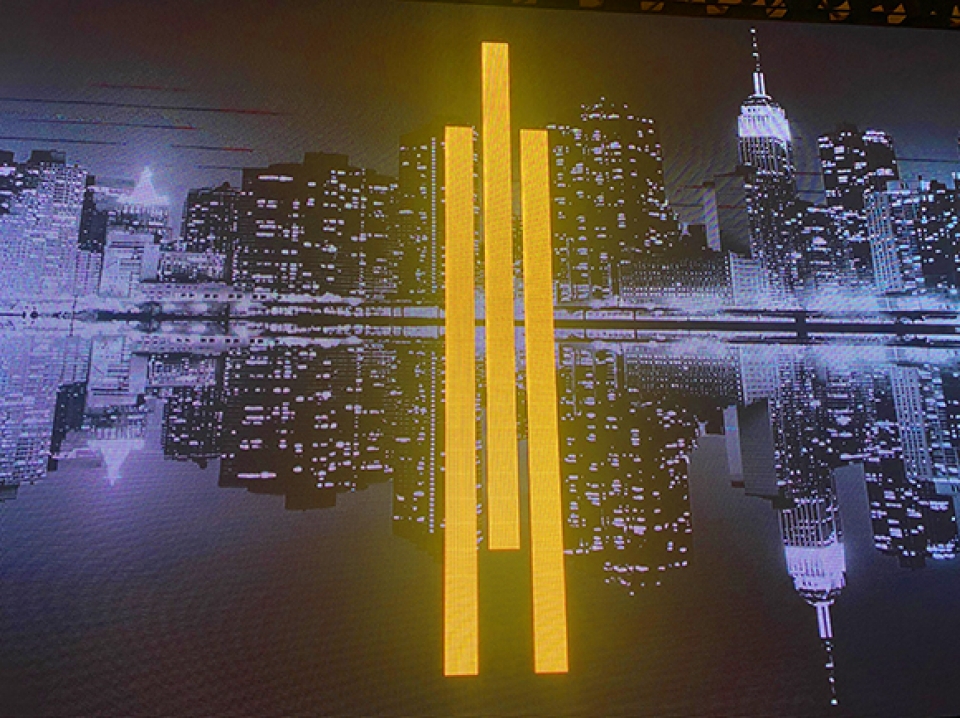 View the embedded image gallery online at:
https://dancebeat.com/m-blogs-en/item/2061-empire22#sigProIdb4643cd188
Former US National Professional Smooth Champions Nick Cheremukhin & Viktorija are back hitting the trail, we suppose they are ready to challenge for the US title once again at the USDC 2022 to be held in Orlando, Florida this coming September. They are looking prepared and quite ready. Nick & Viktorija won last night’s Open Professional Smooth quite easily, they got perfect marks in the waltz and they got the majority of firsts in the rest of the dances. They lost one mark in the Viennese where they were placed second, two marks in the foxtrot and tango. However, in the foxtrot, Jonathan Roberts awarded them a third and in the Viennese and tango, 2 seconds, the only dance Jonathan awarded them a first was in the waltz.
View the embedded image gallery online at:
https://dancebeat.com/m-blogs-en/item/2061-empire22#sigProId3e32d10452
Second in this Smooth championship was awarded to Oleksiy Pigotskyy & Anastasiia Zhuchenko who were awarded 4 of the six first place marks that Nick & Viktorija lost. Their performance was quite good but had little challenge from the rest of the group. Third place in this heat went to Tykhon & Yana Zhyvkov who continue to improve and are beginning to push and will soon be pushing really hard against the group right up on top Jonathan Roberts awarded them a first in their foxtrot.

Fourth overall went to Ivan Sovetov & Valeria Mkrtchian who were awarded these marks 5,5,4,4; fifth were Vladyslav & Brianna Nalyvaychuk 4,4,5,6, and in sixth position were Evgenii Grinin & Olga Morozova and these were their scores 6,6,6,5.

Second in this Ballroom competition was a tie between Andrii Mykhailov & Ekaterina Popova 2,4,2,2,4 and Oleksandr Kalenyuk & Olena Ablitsova 3,2,3,3,3, a total of 14 points were awarded to each couple needing a (Rule10) to break this tie and so at the end of the ruling Andrii & Ekaterina were second and Oleksandr & Olena were third. Fourth overall was awarded to Polina Riabovil & Maksyn Savytskyi 4,3,4,4,2, fifth were Dan Malov & Anna Bohachova 6,5,6,5,5, and in sixth position were Serhiy Averkov & Olena Barna 5,6,5,6,6.

View the embedded image gallery online at:
https://dancebeat.com/m-blogs-en/item/2061-empire22#sigProIdb62e8a4f3a
The Under 21 was also a terrific competition with 6 excellent couples chosen for the final. The winners by winning four dances and placing second in the paso doble were Vadym Pidhoretskyy & Ruby Castro, who got the majority of firsts in the samba and rumba and missed the majority of firsts by one mark in the cha cha, and jive. The winners of the paso doble were Dave Firestein & Kennedy Eaton who placed second in the other four dances and second overall in this competition.

Third in this Under 21 went to Ervinas Valskys & Alexa Sosna and they placed third in all dances. Fourth was awarded to Nathan Zaytsev & Alisa Bankova who placed fourth in all dances, fifth went to Benson Maier & Elisabeth Thompson, and in sixth place were Emil Martirosyan & Sophie Shvartsman.

We want to congratulate the organizers for a well-run competition with very high energy throughout!

The Empire of Dance!

However, to top all this organizer, Giampiero Giannico, once again took to the floor for the second time and with a perfect sense of humor invited, Victor Fung, Ieva Pauksena, and Anna Mikhed to join him on the floor for a mock competition with the illustrious judge, Massimo Giorgianni keeping the scorecard. It was a night to be remembered.

View the embedded image gallery online at:
https://dancebeat.com/m-blogs-en/item/2061-empire22#sigProIdc3ae986b50
Before we speak about what actually took place on the dance floor we should finish mentioning the half-time show that was enjoyed by everyone in the Empire ballroom. Once the guests Victor, Ieva and Anna as well as Massimo were in place, Mr. Giannico proceeded to ask Victor to dance with his former partner Anna Mikhed and he too ask his ex-partner, Ieva Pauksena to dance with him. The first time it was the waltz both couples were welcomed by the audience who could not stop clapping, but in the end when both couples were done the one judge Massimo had the verdict and it was 2nd place for everyone. Don’t fear Giampiero better known as “GG” was not deterred. They changed partners and now they danced the foxtrot, things even got even better when later on Victor & Giampiero did the foxtrot together. This was quite a touching moment for all of us that remember both couples dancing in the USA and representing the USA all around the world.

After the second dance it was still a 2nd place from Mr. Giorgianni and it took Viktor and GG to dance the foxtrot for them to get a first. The entire spectacle was so touching and at the same time so funny it could not be duplicated. Except that Mr. Gianico the night before took Mr. Erminio Stefano for a spin on the floor, he also had a practice run with Mr. Fung - no wonder they won the contest last night in the Empire Ballroom. It was certainly an Empire of Dance!

View the embedded image gallery online at:
https://dancebeat.com/m-blogs-en/item/2061-empire22#sigProId5393f3681f
Now for the actual competitions, The Open Professional Latin was out of this world and it was won by Troels Bager & Ina Jeliazkova who took perfect scores in every dance from every judge. We have seen this couple dance now for a few weeks in a row and I think they are on fire and totally were deserving the perfect score last night. This was also Ina’s birthday and so we should also wish her many more from the Dance Beat family. Second in this wonderful heat went to Mykhailo Bilopukhov & Anastasiia Shchypilina who took second in all dances with a majority of seconds, I have to say this couple last night were also burning the floor with their charisma and musicality we could have not ask for more, what a duo to watch. As in the past we felt like we were at a tennis match going from one side to the other watching their every move.

Third in this excellent final went to Manuel Favilla & Natalia Maidiuk who took third in all dances. Fourth in all dances was awarded to Valentin Voronov & Anna Pelypenko, fifth went to Nikolai Tarasov & Sarah Nolan and that too was in all dances and sixth were Pasha Stepanchuk & Gabrielle Sabler.

View the embedded image gallery online at:
https://dancebeat.com/m-blogs-en/item/2061-empire22#sigProId2e22fe5619
The evening continued with the Open Professional Rhythm and although not all couples were present, there was still a thrilling moment in this final. Francesco Arietta & Jessa Mae Brionnes continued their search for their final placement at many different events and locations here facing the well-known and fierce partnership of Dmitry & Olena Nikishkin who have been runners-up to the US Champions. In this competition Dmitry & Olena won the cha cha with a majority of firsts, but in the other four dances Francesco & Jessa took those dances also with a majority of firsts and so they were crowned the Empire Dance Championships Professional Champions 4 dances to 1. Dmitry & Olena were second overall.

Third in this Rhythm Championship was awarded to Oleksiy Pigotskyy & Anastasiia Zhuchenko and they placed third in all dances. We personally really like this couple and perhaps they are a bit caught up in what is going on at the moment, we think that perhaps they need to disengage and stop following and lead. With the kind of talent these two have, they could easily be in the mix up on top. Fourth in this final was a tie that was easily broken by a (Rule10), and so after the rule was applied Ivan Kudashev & Ksenia Sokolova took fourth 4,6,5,4,4 and Ilya Abdullin & Anastasia Jerjomina placed fifth 5,4,4,5,4. These two couples are also very talented and totally worthy to be called to this final. You both now have to get out of the box, Ivan & Ksenia forget all Latin rules and Ilya & Anastasia forget the past and only look forward, you 2 couples are supper talented. Sixth were Dymytrii Goncharov & Veronika Shapar, another excellent addition to this final 6,5,6,6,6.

View the embedded image gallery online at:
https://dancebeat.com/m-blogs-en/item/2061-empire22#sigProIdaef55288ae
The Amateur categories were excellent and both had some extraordinary happenings. In the Open Amateur Ballroom last night well reknowned Canadian Amateur Champions Nikita Druzhynin & Virginia Primeau were defeted by USA’s Samuel Hacke & Katerina Hermanova. We have always been fans of Nikita Druzhynin & Virginie Primeau, and we have seen Samuel Hacke & Katarina Hermonova dance since they were children and we have to say that the improvement that Samuel & Katerina have made in recent times is very palpable and we are not surprised with this result. From the judges’ marks Samuel & Ekaterina won 3 dances to two Nikita & Virginie won both the waltzes, and Samuel & Ekaterina won all the other dances.

Third overall in this Amateur Ballroom final went to Maria Oblakova & Aleksandr Riabtsev with these marks 3,3,3,3,4; fourth place was awarded to Canada’s Vladyslav Komelkov & Alexandra Sevastianova and they placed 3 in the quickstep and fourth in the other four dances. Fifth in all dances were Aleksandr & Vilhelmina Lavrob, and in sixth place were Artur Nabok & Tais Zhukova.

View the embedded image gallery online at:
https://dancebeat.com/m-blogs-en/item/2061-empire22#sigProIdbdf915a643
The Amateur Latin also had some drama - on this night the champion got stabbed on her foot in one of the dances paralyzing her leg and they had to be pulled to the side until movement and feeling returned, (apparently someone stepped on her) in the end Alexander Chernositov & Arina Grishanina were ablet to return and capture the Empire, they won two dances with perfect score and the rumba, paso and jive they won with a majority of firsts, they only lost one first place mark in the jive, two fist place marks in the paso and three first place marks in the rumba.

Second in this excellent heat went to Tal Livshits & Ilana Keselman, they were second in all dances, we must also point out that all the firsts that Alexander & Arina lost were taken by Tal & Ilana. Third in this heat were Bumchin Tagshjargal & Michelle Klets and they placed third in all dances. Fourth went to Vadym Pidhorestskyy & Ruby Castro 4,5,5,4,4, in fifth place were Dave Firestein & Kennedy Eaton 5,4,4,5,5, and sixth position were Arsen Havrushchyk & Sofia Ward, sixth in all dances.

Some results from the Open Pro-Am Scholarships