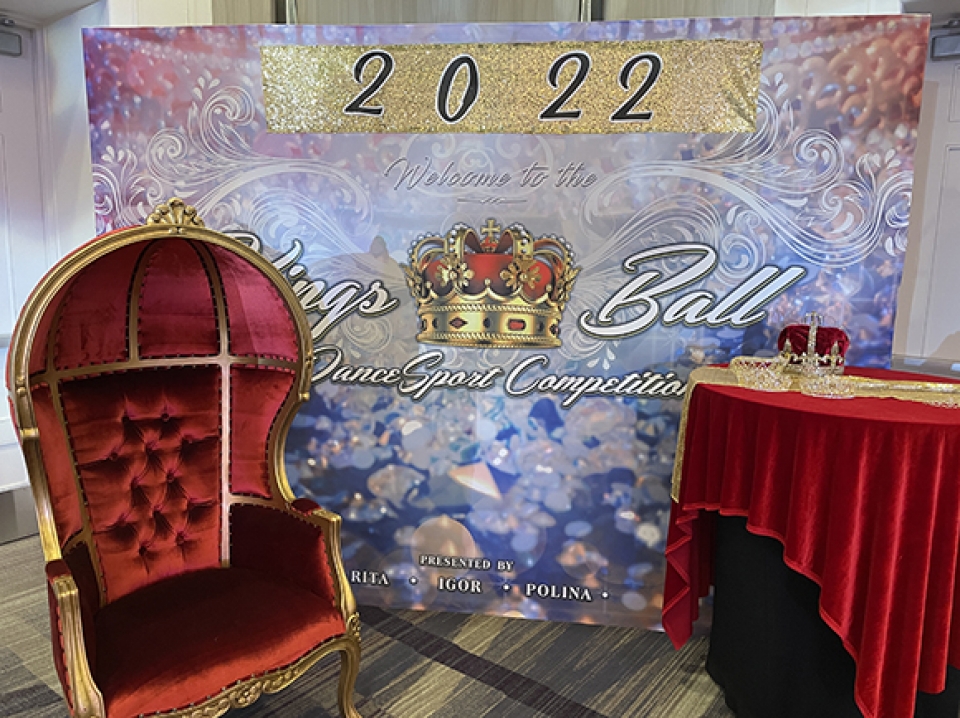 This weekend at the Kings Ball, the anticipated appearance of the new partnership of Andrei Kazlouski & Nino Dzneladze came to pass, and we have to worry no more.

We also saw some amazing open professional championships in the Ballroom, Rhythm, Smooth and some interesting amateur championships.

View the embedded image gallery online at:
https://dancebeat.com/m-blogs-en/item/2095-kings22#sigProId18262c41a1
The performance of Andrei & Nino, two very amazing Latin dancers in their own right, was an interesting surprise and one that we have been waiting for although perhaps not expecting it to be here at the Kings Ball quite so soon. Perhaps we were all expecting too much and that it would be an amazing partnership right from the start because of their talent, and perhaps one that might give us another world professional champion. But in reality, the partnership seemed not quite ready for our very high expectations. In the semifinal round we had a hard time spotting them and we were missing some of Nino’s beautiful walks and action. We did get something fabulous back in the final and that was the “old” Andrei full of the excitement we saw many years back. This partnership is giving him a renewed opportunity to showcase the endless talent he has and one we have been missing for quite some time. We think that perhaps the partnership is not fully developed yet in that each partner’s ability is not perfectly in harmony with the other and during the post competition chit chat, some observers thought some areas of choreography need to be rethought to best showcase each partner’s unique gifts. We look forward to seeing them back in action soon. Our expectations are high! By the way, Andrei & Nino got perfect scores from all judges in all dances and although we might have been expecting more we have to agree with the panel of judges on this one.
View the embedded image gallery online at:
https://dancebeat.com/m-blogs-en/item/2095-kings22#sigProId3a5aace459
An easy second place in all dances was awarded to Pasha Stepanchuk & Gabrielle Sabler, who on this night were quite correct in their performance but in the final did not have the extra spark to challenge the winners. Third place was awarded to Andriy Besyedin &Amanda Besyedin and they too gave an excellent performance good enough to secure them third in all dances.

From this point on the Open Professional Latin could have gone in any direction. The overall fourth place winners were Kelvin Ong & Mariia Kozobrod 4,5,5,4,4. We found them a little frantic at times but some might construe that as having lots of rhythm. In fifth place were Kostiantyn Samarskyi & Margarita Golubeva 5,4,4,5,5. Kostiantyn is a very talented dancer but this new partnership still has lots of work to do to challenge for higher ground and sixth were Vlad Astafiev & Elizabeth Zymovets who took sixth in all dances.

View the embedded image gallery online at:
https://dancebeat.com/m-blogs-en/item/2095-kings22#sigProIdcce331833a
The Open professional Ballroom Last night was also impressive and ready for primetime. Here for us the talent was endless and Andrii Mykhailov & Ekaterina Popova won all dances with a majority of firsts. It is nice to see this couple get the confidence needed to be able to duplicate a good performance from start to finish. Second and not too far back stealing some of the firsts from Andrii & Ekaterina, were Igor Mikushov & Valeriia Belozerova who placed second in all dances and for us was able to challenge the top in a few dances - like the foxtrot and even the Viennese Waltz where they took 5 firsts away from the winners.

Third in this heat and in every dance was awarded to Dan Malov & Anna Bohachova. We found them a little quiet on this outing but once we found them their quality of dancing seemed to hold them clearly in this position. Fourth went to Riccardo Conte & Eleonora Filippi 4,4,4,5,5; in fifth place were Vladyslav Komelkov & Alexandra Sevastianova 6,5,5,4,4. Yuriy Nartov & Neli Petkova placed sixth 5,6,6,6,6, our only observation here is that there was so much dress sometimes it was hard to even see them from afar, and seventh position in all dances went to Ilya Golovanov & Anastasiia Kovalenko

Friday was a great night for Travis Tuft & Jaimee Tuft who won all dances easily in the Open Professional Smooth, with a huge majority of firsts in all dances. It was an even a better night for Aleksandar Vukosavljevic & Alexandra Smirnova who placed second in all dances and gave us, like Travis & Jaimee, a completely different interpretation of the four dance. It was truly a pleasure to see these two couples dance back to back so well and steal the show from all the other couples in the heat.

View the embedded image gallery online at:
https://dancebeat.com/m-blogs-en/item/2095-kings22#sigProId5e064234e3
Third in the Open Smooth went to Radek Wiatrowski & Denise Sobiewski 3,3,4,3. Dave Hannigan & Stephanie Betts placed fourth overall 4,4,3,4, but on this outing we found Dave to be a little distant and not quite present in the action, with a little more involvement they might have taken a dance or two from Radek & Denise their mechanics are good but you need to perform. Fifth were Ben Seifert & Ashley Mattingly 5,5,5,5, and sixth position was awarded to Steve Torres & Nicole Barron and they took sixth in every dance.

It was a very solid performance for Dmitry Nikishkin & Olena Shvets-Nikishkin in the Open Professional Rhythm, they won all dances with a huge majority of firsts from all judges. Only in a couple of dances two judges abstained, but in the other three they could have won the dance with perfect marks except one judge held back. For us there was no contest here between them and the rest of the group, even sporting a golden dress that could be seen from a plane with sparkles, stones and everything in between, you could not have missed them last night.

View the embedded image gallery online at:
https://dancebeat.com/m-blogs-en/item/2095-kings22#sigProIdadff81256d
Second in this Rhythm heat with that contagious smile and shakable rhythm went to Gene Bersten & Elena Bersten and they too placed second in every dance. In third place overall were Dymytrii Goncharov &Veronika Shapar 3,3,3,4. Roger Romero & Arismel Naya placed fourth 4,4,4,4,3, although there is quite a lot of talent here we found their performance a little green and frantic at times leaving us wanting something more. Fifth position was awarded to Jake Davies & Alyona Kalinina placing fifth in all dances, their performance has improved but to the quick eye it can still look a little heavy moving from foot to foot. And in sixth place were Jhondarr Lopez & Ashley Mattingly
View the embedded image gallery online at:
https://dancebeat.com/m-blogs-en/item/2095-kings22#sigProId5169435a42
The Amateur Latin was the biggest heat Saturday night with a quarter-final round of competition and in a unusual setup, two brothers placed first and second, Max Firestein dancing with Nicole Mtchedlidze won all five dances and his brother Dave Firestein dancing with Kennedy Eaton placed second in all dances. Mykyta Vasylenko & Lyndsey Vasylenko took all thirds; Kristers Smits & Shelly Umansky were fourth, and Sergey Pirozhkov & Dasha Zhalo took overall fifth place 5,5,5,5,6, leaving sixth place to Marc Zhadan/Savanna Filip 6,6,6,6,5.
View the embedded image gallery online at:
https://dancebeat.com/m-blogs-en/item/2095-kings22#sigProIdd4903c5e8c
The Amateur Ballroom was possibly the smallest of all these heats with only three couples entered. Samuel Hacke & Katarina Hermanova won all dances. Alieksandr Lavrov & Vilhelmina Lavrov took all seconds and in third place were Yevgenii Taraniuk & Laura Makinen.

Saturday night also featured a show by World Finalists, Pasha Zvychaynyy & Polina Teleshova, who announced that they will be representing the USA in future events.