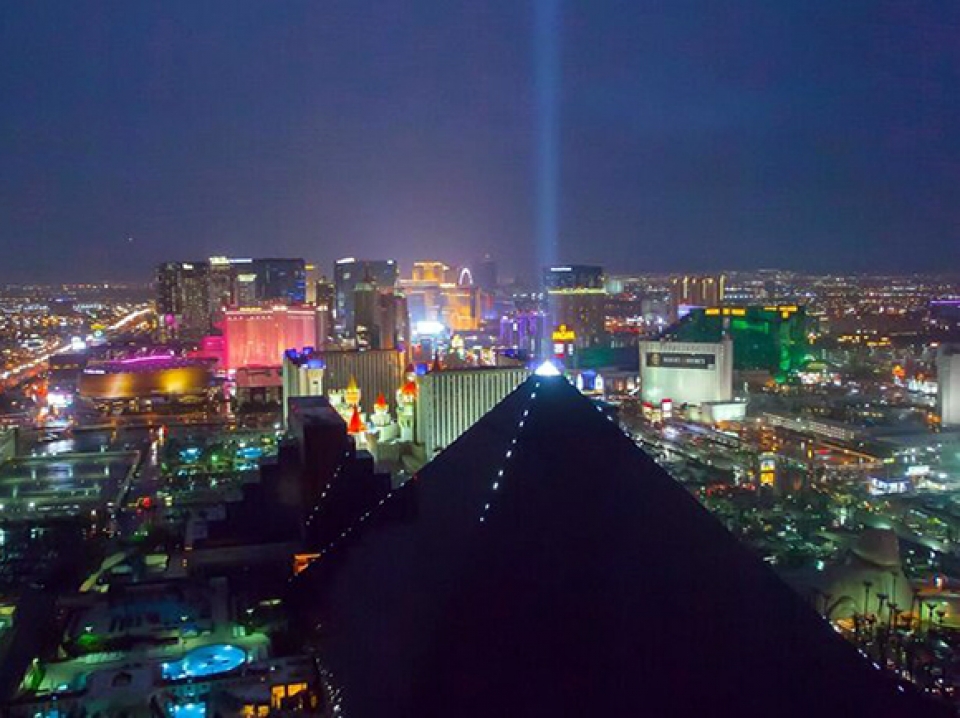 The Professional Latin at the Holiday Classic did not disappoint, and the Amateur Latin was also quite impressive!

The Holiday Classic is perhaps our favorite event of the year, it not only offers quite a lot of entertainment but when it comes to dancing there is always some excitement in the air. This is an excellent way of finishing a year of dance and there is no better place to close up the dance book for the year than at the “Holiday Classic.” With close to 12 thousand entries, the Holiday Classic also continues to be a popular competition to do and with Vegas as the playground you can never go wrong with this competition as a choice to finish up your dance year.

View the embedded image gallery online at:
https://dancebeat.com/m-blogs-en/item/2098-holiday22#sigProIde12ba7e96a
As we just mentioned the Open Professional Latin was a duel of two styles and two giant of dance, Troels Bager & Ina Jeliazkova and the newly formed partnership of Andrei Kozlowski & Nino Dzneladze who just recently started competing on the circuit and have been blasting and winning their way through every comp so far like a hurricane in season. This past weekend Andrei & Nino seemed to have finally met their match and we have to say that for us up to the samba it required some micro surgery from the judges to place these two couples, for us any judge could have gone either way on this two dances. On paper this is not true, the judges seemed to have an easy task of it - Troles & Ina won the cha cha nearly with perfect scores with only Bill Sparks out of 15 judges awarding Andrei & Nino first place. As you can see Troles & Ina won with a super majority of firsts this first dance. The samba the other dance that we felt that perhaps was a good chance for Andrei & Nino to score a punch, seemed to also be even a much harder wall to climb, Troels & Ina won with perfect scores from all the judges.

In speaking to some of the judges after the fact many of them were not as impressed with Andrei & Nino’s performance, they all seemed to agree that they are both super talented but many of them seem not to quite understand what they are trying to do, some feel that the qualities that made Nino such a commodity on the dance floor as an incredible lady in the amateur field have all been taken away, and although their routines were fully deserving of second place, they did not rise to the level of musicality and clarity that Troels & Ina showcased. But given the relative lengths of the two partnerships, perhaps that is to be expected. In the rumba only two judges awarded Andrei & Nino first place and they were Plamen Danilov and Marcus Homm. In the paso doble Andrew Philips and Bill Sparks also awarded them first. But in the jive all judges awarded Troles & Ina perfect scores once again.

View the embedded image gallery online at:
https://dancebeat.com/m-blogs-en/item/2098-holiday22#sigProId817b85b99a
From our side we have to agree with the judges on this call, yes Andrei & Nino have untouched potential but they need to be a little more clear on what they are getting across including not losing what they each have and can bring to the floor, and most of all don’t complicate your programs with unnecessary maneuvers - we are here to see five basic dances cha cha, samba, rumba, paso doble and jive and not “Cirque du Soleil”. This past weekend’s panel of adjudicators were all very seasoned players that have lived through plenty of Hurricanes, and plenty of competitions many of them competing to the highest levels of dance and have seen almost everything in their lives and when you dance for them, they need to be totally convinced of the choices they have to make, our compliments to the well-seasoned organizers on their excellent choices.
View the embedded image gallery online at:
https://dancebeat.com/m-blogs-en/item/2098-holiday22#sigProIdd544e7eacf
We were quite disappointed not to see some of the other couples that could have challenge for top position, they either canceled or did not enter. They were totally missed even though, the judges would have had even less time to resolve their dilemna. Third in this Holiday Championship went to Ilya Maletin & Anna Oblakova who had a wonderful night and we were able to see what a terrific partnership they will be with a little more time, they placed third in three dances and fourth in the cha cha and jive. Fourth overall were Nikolai Tarasov & Sarah Nolan 3,4,4,4,3; fifth were Rangel Spirov & Veronika Chernyavska and they were fifth in all dances. Sixth place went to Igor Drobotov & Liya Kazbekova.

Before we go on to the other more predictable professional heats we must mention the other Latin heat that was quite fun for the audience with an impressive lineup - the Open Amateur Latin. Here the indisputable winners for us and for the judges were Alexander Chermositov & Arina Grishanina winning all dances with a majority of firsts and losing two first place marks in all dances from different judges, their lowest score was a third place in the rumba from Eugene Katsevman, other than that they never lost more than three marks in all dances.

View the embedded image gallery online at:
https://dancebeat.com/m-blogs-en/item/2098-holiday22#sigProIde42132bbc3
For us the fight here was for second place between Tall Livshitz & Ilana Keselman and Bumchin Tegshjargal & Michelle Klets, but there was apparently no fight from the judges side - Tal & Ilana were clearly second place and Bumchin & Miclelle took third in all dances. For us it was closer than that with a possibility of Bumchin & Michelle taking the first three dances but apparently the judges felt differently. In fourth place was Vladumir Timofeev & Evgenia Floriskaia 5,5,4,4,4, and fifth went to Kevin Filipzak & Sophia Marriott 4,4,5,5,5, leaving sixth to Maksym Rodionov & Shawn Miller.
View the embedded image gallery online at:
https://dancebeat.com/m-blogs-en/item/2098-holiday22#sigProId85e0087359
The Open Professional Smooth was also a wonderful heat and here Nick Cheremukhim & Vika Viktorilja won all dances with a majority of firsts. The couple to steal the most first place marks from Nick & Vika and who are now dancing as if no one is watching, Travis & Jaimee Tuft placed second in all dances. Unbeknown to us there was a major fight for third place between Aleksandar Vukosavljevic & Alexandra Smirnova and Oleksiy Pigotskyy & Anastasia Zhuchenko with each placing second in two dances and third in two dances with total points of 14 each. After a (Rule11) was applied Aleksandar & Alexandra were third and Oleksiy & Anastasia were fourth. Four us it was cleare than that, we felt that Aleksandar & Alexandra’s interesting interpretation and performance of each dance was a little more clear and exiting to watch than that of Oleksiy & Anastasia. Fifth place was awarded to Igor Dogoter & Natalia Gorshkova and they took fifth place in every dance and sixth were Adele & Jang Don.
View the embedded image gallery online at:
https://dancebeat.com/m-blogs-en/item/2098-holiday22#sigProIdf6398ca1db
There was a memorable moment here at the Holiday Classic, the retirement of a Smooth professional couple from the competition arena. Mariusz Zakrzewski & Lynnsay Ray chose their home town of Las Vegas to announce the end of their professional partnership. We wish them well in the next stage of their careers.
View the embedded image gallery online at:
https://dancebeat.com/m-blogs-en/item/2098-holiday22#sigProId21bc97d340
It was nice to see the Open professional Ballroom with some young, fresh faces at the helm, and in this heat the overall winner by placing first in four dances and second in the quickstep, and not with a majority of firsts but relying on ‘seconds or better’ to win the four dances, were Andriy Mykhailov & Ekaterina Popova. Second in four dances and stealing the quickstep were Dan Malov & Anna Bohachova. Third in all dances went to Serhi Averkov & Olena Barna; fourth place went to Ruslan Kaliuschnyi & Elena Babaeva 4,5,4,4,5; fifth went to Mirko Spano & Pamela Romano 5,4,5,5,4, and sixth in all dances was awarded to Riccardo Conte & Eleonora Filippi.
View the embedded image gallery online at:
https://dancebeat.com/m-blogs-en/item/2098-holiday22#sigProIdb28c39ff41
We were a little disillusioned in the Rhythm, expecting some major fireworks, but in the end it all fizzled out. It was a clear first place sweep for Olena & Dmitri Nikishkin who won all dances with a majority of firsts in every dance. Second overall was awarded to Oleksiy Pigotskyy & Anastasia Zhuchenko by placing second in three dances and third in the rumba. For us the night went to Ivan Kudashov & Ksenia Sokolova who placed third overall and second in the rumba and from our perspective could have placed second in all dances easily, we really enjoyed their performance this evening. There was a fight for fifth place and this tie had to be broken by a (Rule11) between Shen Modrzynski & Magdalena Zybura and Ilie Bardahan & Oxana Kashkina they both had 27.5. after the rule was applied fifth place went to Shen & Magdalena and sixth were Ilie & Oxana.
View the embedded image gallery online at:
https://dancebeat.com/m-blogs-en/item/2098-holiday22#sigProIdd7ef4aa19d
The Open Amateur Ballroom went to Samuel Hacke & Katerina Hermanova winning all dances but only in the tango and foxtrot did they have the majority of firsts, in the rest of the dances they had to depend on second or better. In second place were Mikhail Vorobiev & Anna Sydygalieva taking second in all dances. This is a promising new partnership. Third overall went to Nathan Zaytsev & Alisa Bankova 4,3,3,4,3, and fourth was awarded to Artur Nabok & Tais Zhukova 3,4,4,3,4. In fifth were Parley Ford & Natalie Jolley 5,5.5,5,5,5. Parley & Natalie were also the winners of the Open Amateur Smooth. Sixth went to Robert McShinsky & Jenna McShinsky.

Here are some selected highlights from the pro-am divisions.