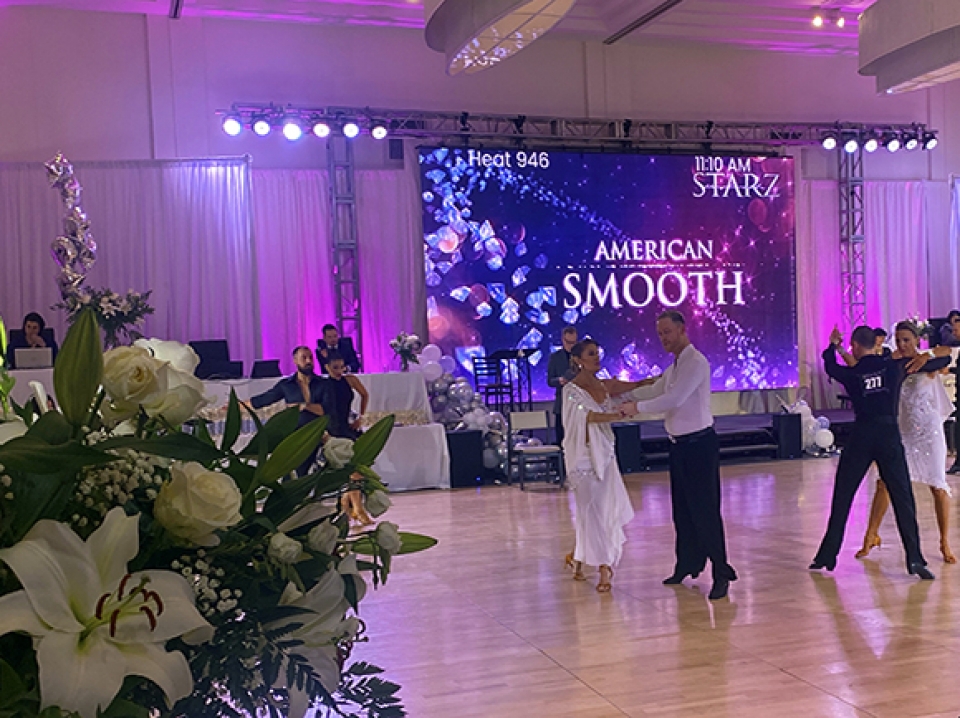 This weekend at the Nashville Starz the first ever NDCA national ranking for professional, amateur and pro/am took place.

The National Dance Council of America decided to have a ranking system beginning this year, so if you can dance and place you can score big and become the number one ranked couple on the NDCA roster. Dance plenty, score as high as you can, that’s all that is required to be number one at the NDCA.

All major events here at the Nashville Starz were NDCA ranking events.

View the embedded image gallery online at:
https://dancebeat.com/m-blogs-en/item/2104-nashstarz23#sigProIdce632f4a07
The Open Professional Rhythm was perhaps the event that had the most punch in this beautiful finale of the Starz, and for us and the majority of the judges Dmitry Nikishkin & Olena Shvets-Nikishkin took the prize home by placing first in all the dances with few dissenting judges. In the cha cha and rumba they lost only one mark, in the bolero and mambo they lost two marks and the one dance where we think they are usually the best, the swing, they took three second place marks. But as you can see they still won with a majority and for us they were perhaps the most balanced couple of the group always working together and dancing with one another something almost unusual nowadays.

Second in this Rhythm heat was awarded to the one couple who stole all the firsts from Dmitry & Olena and that was Oleksiy Pigotskyy & Anastasiia Zhuchenko who were clearly to us well deserving of this rank. For us on this outing Oleksiy & Anastasiia, who danced in both American styles Rhythm and Smooth, were superb, leaving no room for anyone to get ahead of their second place position in either style.

Third in this Rhythm event and in all dances was awarded to Gene Bersten & Elena Bersten. Fourth place also got fourth in every dance and they were Ilie Bardahan & Oxana Kashkina. Fifth and sixth positions had a little more fight. Fifth position overall was taken by Roberto Fernandez & Angelina Evseeva with these marks 5,5,6,5,6, and sixth place was awarded to Roger Romero & Arismel Naya 6,6,5,6,5.

View the embedded image gallery online at:
https://dancebeat.com/m-blogs-en/item/2104-nashstarz23#sigProIda98d632b81
The Open Professional Smooth was top of the line even though it was slightly more predictable than the Rhythm. We must also mention that both the Rhythm and the Smooth started with a quarter-final round and both finished with a six-couple final. In the Smooth the winners for the majority of the judges and for us as well were Nick Cheremukhin & Viktorija Barashihina. They won both waltzes with perfect scores and lost two marks in the other two dances. We figured it would be a clear sweep because other than Oleksiy Pigotskyy & Anastasiia Zhuchenko, who by the way also took those few first place marks, there was no one else to challenge them. Nick & Viktorija for us were a complete package they also seemed to be enjoying themselves and the process a little more than usual, something that perhaps was needed in the past.

From third place down the Professional Smooth was a little more divided. Third place overall went to Peter Minkov & Yuliia Sorokata 3,3,4,4. We figured they would be in this position because of the great technical quality this couple possess. However, at times they tended to get lost in the crowd a little and in the tango they hardly went anywhere. We admire this couple but they need to make a few changes in their strategy to be able to pass these top two couples mentioned who are both totally solid in their performances. Fourth place was awarded to Ivan Sovetov & Valeria Mkrtchian 5,4,3,3; fifth went to Dmytro Pohybil & Alona Kushnir 4,5,5,5, and sixth place in all dances was awarded to Stefan Badea & Whitney Myers. They won the Rising Star the night before.

Before we move on, we must mention something that has been brought to our attention from many of our peers - should loose hair be banned from the dancefloor? We know this is a very strong question to make because it seems to now be the trend in all styles and categories, but we see the point of the question, especially after the first dance when perspiration comes and the hair begins to stick and mangle. It is a little distracting from a viewer’s perspective and it has to be super distracting for the judges that have to make a decision in such a short time. As we mentioned to some of the people bringing the subject up, any distraction like a way too revealing outfit with holes where there should not be, or pieces of cloth running around faces etc. is very distracting for all that are trying just to focus on dance. Tell us what you think. Write us a note and we can share your feelings about all the distracting loose items you want banned! They banned objects from being used and discarded on the floor during a routine, why not loose hair, inappropriate holes, or dance trunks, why not tell us what you think and make your voice heard?

View the embedded image gallery online at:
https://dancebeat.com/m-blogs-en/item/2104-nashstarz23#sigProId458c8dd2dd
Now that we got that out of our hair, let’s talk a little on the Open Professional Latin that ended up being a seven-couple final. Here many of the marks were shared and we can see why, there was no distinctive couple in the final - one that made their signature stick. The overall winner as you will see were Dmitrii Chopenko & Valeria Khrapak who took three firsts, a third in the rumba and a second in the cha cha. We kind of agree with the overall result but first place could have also gone to Evgeny Likhachev & Maria Levina whose work was also as clean as you could get 1,2,1,2,3.

Third place in this Latin final went to Oleksii Fedorov & Anastasiia Konieva 3,3,2,3,2 and they also won the Rising Star. Fourth were Mishiko Bregvadze & Alena Khoroshevtseva 4,4,4,4,5; fifth was awarded to Joseph Hopwood & Alexandra Hopwood 5,5,5,7,4; sixth went to Kelvin Ong & Masha Kozobrod 7,6,6,5,6. Here we saw something almost as interesting as the loose hair - “The Robe” in the quarter-final we though this young lady forgot to take off the robe and put her costume on, but seconds later as we saw the sprinkle of rhinestones on the bottom of the “Robe” and we realized “NO” this was her costume. Okay, we are officially old we admit, and we have seen it all! Continuing with the Latin result, Aleksei Minaev & Elena Minaeva took seventh place overall 6,7,7,6,7. Aleksei & Elena also won the Open Ballroom in a 2-couple event.

View the embedded image gallery online at:
https://dancebeat.com/m-blogs-en/item/2104-nashstarz23#sigProIdb01195c58d
We must also mention the Open Professional Showdance. Here there were three very talented couples and possibly a very difficult desision for the judges that had to compare some Cabaret routines with overhead lift and some strictly Showdance numbers that featured no overheads, not an easy task. First with almost perfect scores were Stanislav Morozov & Kseniia Tashkinova who did a mixture of rumba with plenty of overhead thrills. They lost one mark from the 9-panel of judges. Second overall went to Devan McClish & Brooke McClish who got the missing first place mark from Stanislav & Kseniia, but they also got some thirds and even a fourth from the panel of judges. This routine we should say rocked the boat for the judges. For us this couple did some amazing lift work, very little floor dancing but terrific lift work. Third place went to Roger Romero & Arismel Naya, fourth were Kelvin Ong & Masha Kozobrod and fifth was awarded to Alexander Romanov & Anna Blagodyreva.

The Open Pro-Am Scholarships were also national ranking events and here are some of the main winners.

The American Style divisions were by far the largest in all levels. Here are the top 3 in the open scholarships.

Congratulations to the organizers, Andre & Natalie Paramonov - the organizers of this great early January event.  The ballroom looked spectacular and every detail was attended to.