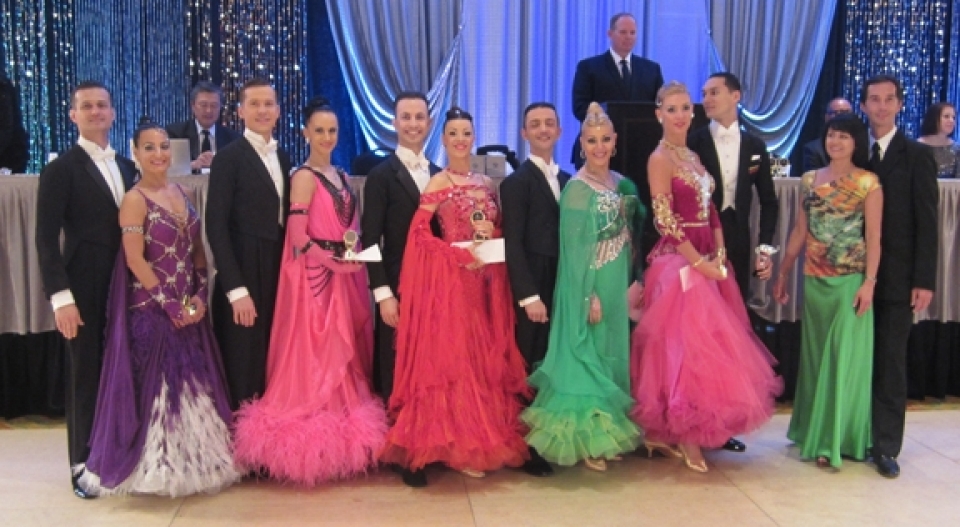 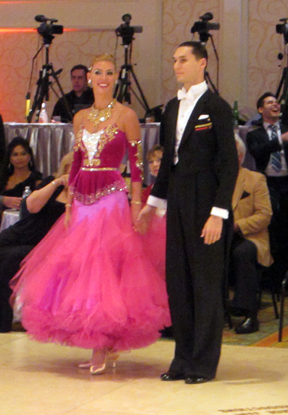 Alexander Voskalchuk & Veronika Egorova were the clear winners taking almost all the judges’ first places.  (Although they did receive one 4th place and two 3rd places from one judge).  The reverse came in the 2nd and 3rd placements.  Last week in Maryland, Gianni Caliandro & Arianna Esposito defeated fellow Italians

Emanuele & Francesca Pappacena by 3 dances to 2.  Here it was the reverse, with Emanuele & Francesca placing 2,2,2,3,3 over Gianni & Arianna, 3,3,3,2,2.  Sergey Samchynskyy & Yuliya Besarab were 4th in all dances and Vladimir Triazin & Alicia Gruttadauria were 5th.

It was a great beginning for Maksym Lototsky & Sarah Haworth who won all dances in the Rhythm on their first outing together.  They won all dances, but had the

majority of 1st places in only the cha cha and rumba.  Overall the judges’ scores were quite divided in this event.  Another new partnership, Sandor Stefil & Aleksandra Barsukov were 2nd, 2,3,2,3,4.  With 4,2,4,2,3, the experienced Stephen Smyth & Viktoriya Kleyman took 3rd.  Tamas Kardos & Mariya Khristina Shurupova were 4th, 3,4,3,4,2;  Romney Reyes & Brooke O’Donnell were 5th in all dances and Egor Shalvarov & Alla Profatilova were 6th. 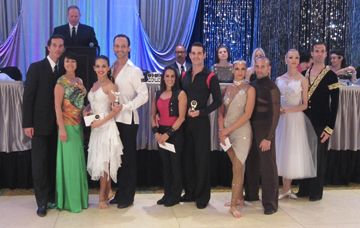 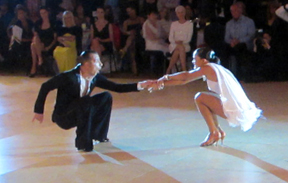 The audience were thrilled with the closing show performed by Canadian Pro Latin Champions and World Finalists, Mauritzio Vescovo & Andra Vaidalaite. Next year Platinum is returning to its Downtown Miami home.  Stay tuned to the Dance Beat Subscriber site for more about this year’s event. Pro Smooth Gives Surprise Ending at Platinum The Pro Smooth was the feature event of Friday at Platinum Dancesport and it yielded a surprise finish. 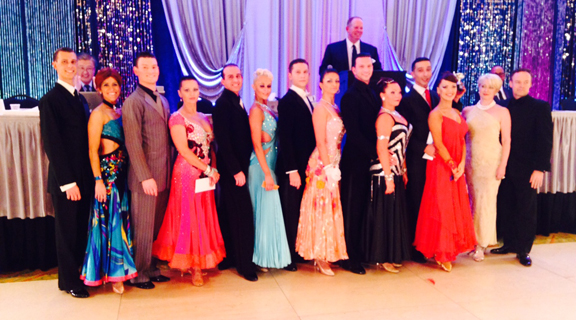 Not too much surprise in the winners, however, as Mikhail & Galina Zharinov won all dances losing only 3 1st places out of 36.  The surprise came with the ascendance of a new partnership, Chris Germain & Olga Chekhova to the runners-up position, besting the established partnership of Vlad & Vera Kosarev by 3 dances to 1.  Vlad & Vera placed 2,3,3,3 to Chris & Olga’s 3,2,2,2.  It was a split panel of judges between the 2 couples, but the majority favored the newbies in 3 dances.  You’ll have to wait until the next edition of Dance Beat (or become a web subscriber) to hear our opinion.  This event began with a semifinal.  The remaining places in the final were:  Stephen Smyth & Viktorija Kleyman (4,4,4,4);  Egor Shalvarov & Alla Profatilova (5,5,5,5) and William Proper & Jennifer Caminas (6,6,6,6). It was also a pleasure to watch the children from the local studio, Dance Town, who performed most of the night in the various junior and youth divisions. For the pro-ams it was a full day of Rhythm and Ballroom, with some strong dancing especially in the Ballroom divisions.

On the first night of Platinum (Thursday) it was all celebration as a cast of dance stars performed for the TAP Benefit Gala.