Ballroom Outshines Rhythm at CA Open Saturday The Open Pro Ballroom was the much stronger of the 2 pro divisions last night at CA Open.  "There are shortcuts to happiness, and dancing is one of them" 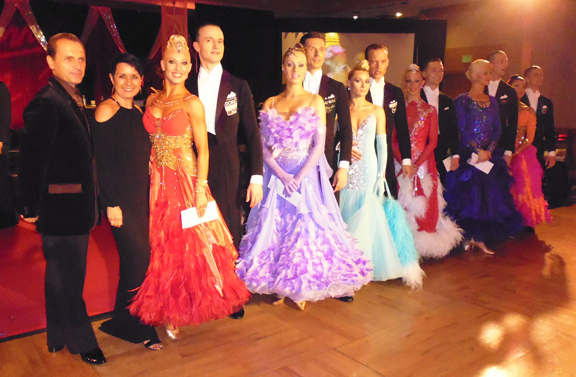 In the final, it was a two-way race for 1st between two of the nation’s best, Artem Palkhotnyi & Inna Berlizyeva and Mikhail Avdeev & Olga Blinova.  Today the race was more one-sided than it has been in the past and Artem & Inna won all dances, each with the majority of 1st places.  The closest was the waltz that they won by 9 firsts to 6.    No other couple took any first places except the top 2.  So were Artem & Inna really in tip top form or was it Mikhail & Olga who were not at their best?  You’ll have to wait for the full coverage in print or online to get our opinion. 3rd today went to Denis Kutepov & Lesya Sinitsa and we thought they also had a very strong showing.  They were 3rd in all dances.  We were also impressed with the style and fluidity of 4th placed Igor Colac & Roxanne Milotti and they were 4th in all dances.  Taking all the 5’s were Robert Nemiro & Olga Tsikalyuk and 6th in this strong final went to Michael Towliszew & Tiffany Fung. 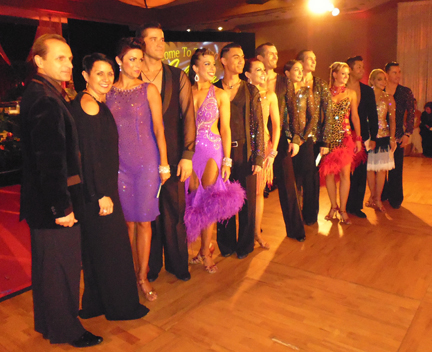 The Rhythm did not rise to the challenge.  We enjoyed the performance of Ivan Dishliev & Marieta Nedyalkova who won all dances, but felt they were strongly challenged by the runners-up, Jonathan Chen & Nadine Messenger.  3rd were Dustin Donelan & Kristen McCloskey, 4th Pierro Della Santini & Allesandra Gonzalez, 5th Tommy Belmontez & Jessica Holty and 6th C.J & Jenny Lynn Gomez.  Giocomo Steccaglia & Melissa Dexter will offer their comments in Dance Beat soon. Just before the Rhythm division began it was time to say a fond farewell to the much loved team of Jason & Sveta Daly, former US Pro Rhythm Finalists who chose to make their retirement official in front of their home crowd here at the California Open. 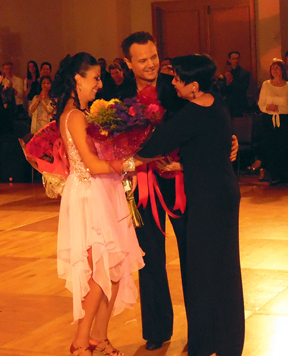 They danced a beautiful bolero and thanked their many friends and supporters.  (The full letter will appear in Dance Beat soon)."Never give a sword to a man who can't dance." The evening began with 3 rounds of the Amateur Latin, with some skillful couples and others who had much enthusiasm but little experience.  The winners won all dances and they were Denys Samson 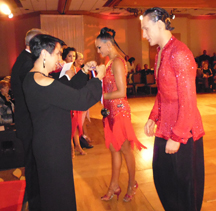 & Yuliya Nikitebko representing England.  They are tall and elegant and certainly were the most eye-catching couple in the competition.  We were particularly impressed with the runners-up, Phillip Kudryatsev & Ashley Goldman who have improved tremendously since their move to California.  3rd tonight were Trey & Hope Jackson who are technically strong but lack characterization at this point.  4th fell to Umar Diallo & Natalya Devitskaya, 5th to Teleryck Ianakiev & Natella Devitskaya and 6th to Parker Lynn & Kristina Tieken. For the pro-ams it was Latin day ans we felt these were the strongest of the open scholarships.  The A was an especially strong final.  Cheyenne Murillo w/ Sasha Althukov won all dances and was clearly ahead in our view.  2nd in all was Brittni Gonzalez w/ Radomir Pashev and 3rd was Natalia Zhukova w/ Kiril Nitkin from Russia.  Look for a full report on this division in Dance Beat – with perhaps some views that differed from the final results. The Open B winner was Svetlana Van Tessel w/ Andrey Tarasov and she won all dances.  2nd fell to Kimberly Bolourtchi w/ Alex Borodko 5,2,3,3,2 and 3rd to Cindy Hwang w/ Nikolai Voronovich 3,3,2,4,3.  Connie Buckley w/ Leonid Proskurov won all dances in the Open C.  2nd in all was Rhonda Lynch w/ Stephen McCann and 3rd was Tammy Knight w/ Oleksil Lytvyn 3,3,3,4,3. Eugene Katsevman & Maria Manusova were on hand to perform their electrifying and fast-paced show that received several standing ovations from the appreciative audience.

Not As You Might Expect!
Friday night at CA Open Last night we saw the first of the Open Pro events and although one roughly as we expected, the other one did not. 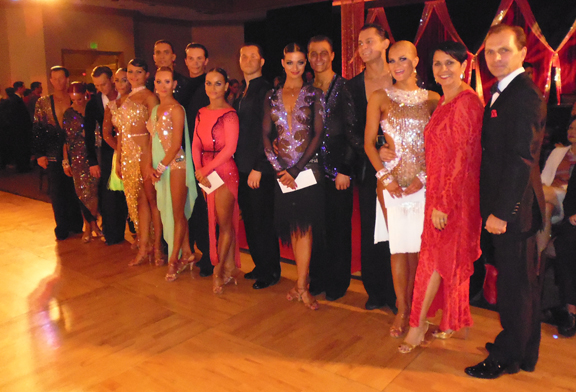 The surprise for us came in the Open Latin.  Debuting tonight was former US Finalist, Yegor Novikov with new partner, Tetyana Olynyk.  The question was, what would the judges decide.  Well, there certainly wasn’t much doubt about the winners – Andrei Kazlouski & Asta Sigvaldadottir received the vast majority of the first places and easily won all dances. 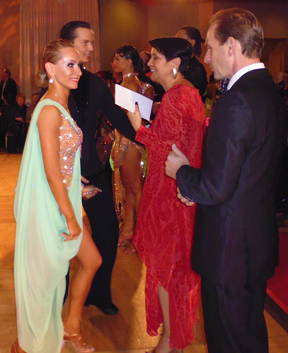 But it was not to be Yegor & Tetyana’s night to be second.  While they did receive a number of 2nd placements in each dance, it was never enough and the majority of judges placed them lower.  Finally their placements were 4,4,4,4,4 – obviously placing them 4th overall.  Was this too low?  You’ll have to read Dance Beat soon to find out what we thought and Martin Lamb will also give his thoughts on this division. But let’s not write off the other 5 couples in this great final.  They were all great and it was a nightmare for the judges.  The rapidly rising Vitalii Proskurin & Evgenia Shatilova took 2nd overall 2,3,3,2,2.  We thought this was a close race with 3rd placed, Andrey Tarasov & Yulia Kuznetsova 3,2,2,3,3.  Evgeniy Likachev & Mariya Levina took all the 5th  placements, Oleg Astakhov & Olivia Wesolowska were 6th 6,6,7,7,6 and Simeon & Kora Stoynov closed the final, 7,7,6,6,7. 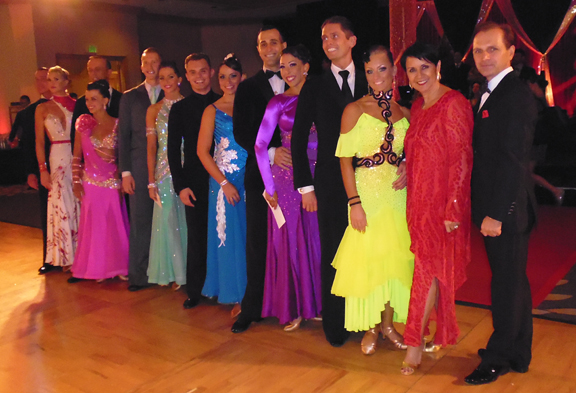 As we said, the other pro event, the Open Smooth was a little more predictable.  Nick Cheremukhin & Viktorija won all dances tonight.  We did think the runners-up, Kris Suakjian & Brianna Haft put up a good fight and have improved in basic technique a lot, but they had to be content with 2nd in all dances.  The closest race was for 3rd and that required a Rule 11 tiebreak that fell to David & Natalie Shulz 4,3,4,3 over Kyle & Allie Spinder 3,4,3,4.  Sergiy Smolin & Anna Tomasini were 5th 6,5,5,5 and Alex & Jessi Allion were 6th 5,6,6,6.  Beth Knoll will give her thoughts on this division in Dance Beat soon. 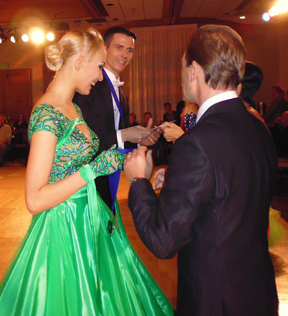 The largest event of the night was the Amateur Ballroom, much swelled by the inclusion of many couples from BYU.  It was a strong final with the win going to the tall and stately Andrei & Veronika Ends – they won all dances.  We really enjoyed the dancing of the runners-up, Ruslan Kalyuzhnyy & Ksenia Sovenko who were 2nd in 4 dances and tied 2nd in the quickstep.  The other half of that tie was 3rd placed, Jordan Quintana & Grace Wang 3,3,3,3,2T – a fiery partnership that we also enjoyed.  4th in all were Tyler Wilson & Annie Seeley, 5th Dan Manea & Mia Hu (5,6,5,5,6), 6th Casey Treu & Kayci Kirkham (6,5,6,6,5). Big congratulations to Dmyt 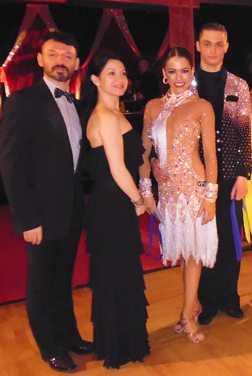 ry Dmytrenko & Cheyenne Murillo who won both the Under 21 and the Youth Latin divisions – both massive events. Of the Open Pro-Am Scholarships, danced in the late afternoon, the largest was the C and this went to Deborah Errico w/ Dariusz Michalski and she won all dances.  2nd went to Sally He w/ Enzo Zappia 2,2,3,2,2 and 3rd to Alex Hu w/ Olga Tsikalyuk 3,4,2,4,3T.  Melonie Krumer scored her second Open win of the weekend taking the Open A with Max Sinitsa and winning all dances.  2nd was Rebecca Kuhn w/ Andrea Feraci, again in all dances and Machiko Fuji w/ Alex Muradasilov was 3rd.  Alexandra Michel w/ Victor Veyrasset won the Open B, placing 1,2,1,2,1.  It was a close race and taking 2nd was Lily Chang w/ Sergey Kiselev, 2,1,2,1,2T.  3rd went to Ling Ma w/ Edgar Gasjuns 3,3,3,3,2T.

Stars Rising at CA Open The first of the professional events were held yesterday at CA Open – Rising Star divisions in Smooth, Ballroom and Latin. Kyle & Allie Spinder ran away with the Smooth taking all 9 first places from the judges in every dance.  After them it was definitely tighter.  Slava & Lara Kostianets, a tall, elegant couple from CA, new to us, took 2nd with 2,3,2,2.  3rd, but with the odd placements of 5,5,3,3 were Sergey Smolin & Anna Tomasini. 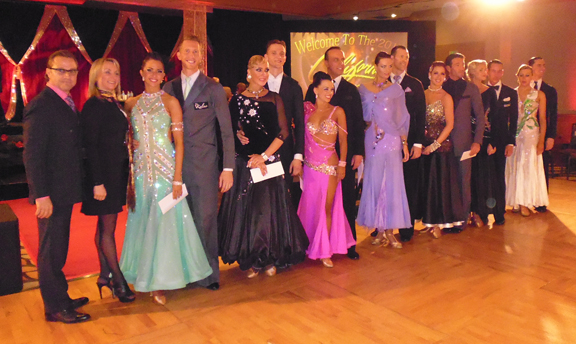 We felt the Latin was perhaps the most exciting division of the night, with several truly rising stars contesting the final.  The winners were Vitalii Proskurin & Evgenia Shatilova, but they did not have everything their own way.  They placed 1,2,1,1,1 with Evgeny Likachev & Mariya Levina taking 2nd with 2,1,2,2,2.  Vitalii & Evgenia’s best marked dance was the cha cha, where they took 6 of the 9 1st places.  3rd, placing 5,3,3,3,3 were Oleg Astakov & Olivia Wesolowska. 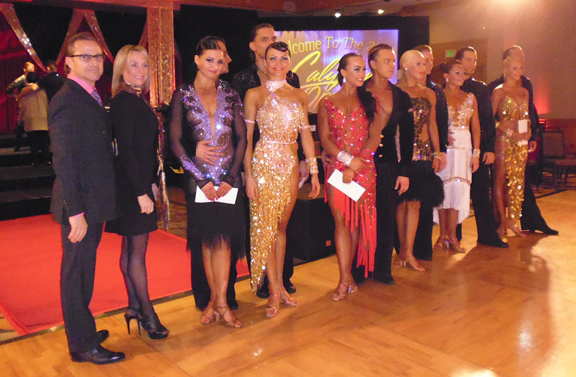 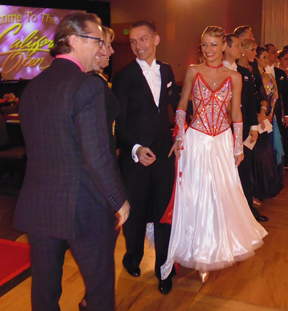 The Ballroom was also quite a close race, but the win went to another new couple to us, Evgeniy Mayorov & Olga Lisovskaya from Nevada who won 4 dances and placed 2nd in quickstep.  Taking quickstep were Simeon & Kora Stoynov.  They were 2nd in the remaining dances.  The judges were fairly evenly split between these 2 couples.  Slava & Lora added a 3rd place here to the 2nd they received in the Smooth (3,3,3,3). The Pro-Ams competed in Rhythm today and many of the heats were highly contested.  Unfortunately, the Open Scholarship did not attract huge numbers, but the quality of the dancing was high.  The largest of the divisions was the Open C.  Hope Huber w/ Troy Baeton won all dances and we thought definitely showed improvement in this style.  2nd went to Penelope Rostad w/ Nikolai Karchev (3,2,2,2,3) and 3rd to Philip Widlanski w/ Jolanta Mosteika (2,4,3,3,1).  We were a little surprised to see Philip this low in the ranking. Natalie Crandall won the Open A (1,1,1,1,1).  Nadiya Kireyko w/ Daniel Vasco was 2nd (2,2,2,2,2) and Tiffany Sulliva w/ Dustin Donelan was 3rd.  Giovanni Fortezza w/ Jolanta Mosteika won the B taking all dances over Victoria Romm w/ Daniel Vasco.  Darlene Bloom w/ Jason Daly was the winners of the Open Senior.

CA Open Starts Smoothly, despite winter storms! The CA Open started smoothly yesterday despite the winter storms that were disrupting travel nationwide.  Even your intrepid reporter was delayed a day, due to airport closures.  But it’s a balmy 80 here in Orange County! 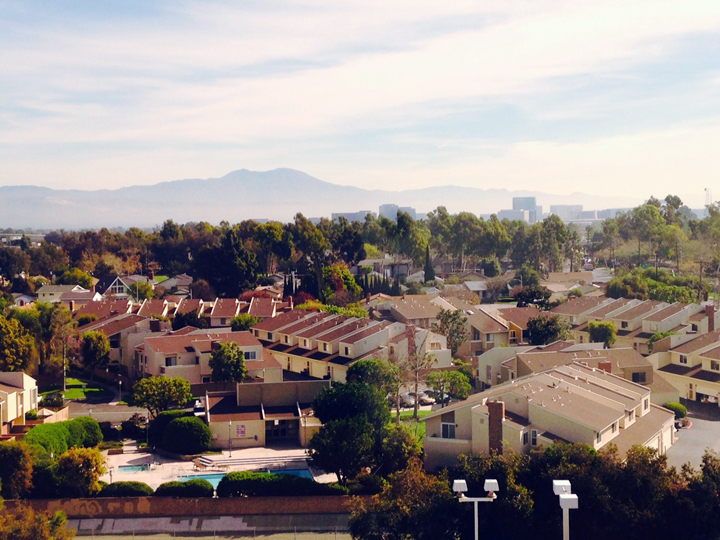 The CA Open is in a new home this year, the Costa Mesa Hilton, and so far everything seems great here. It was also a “smooth” day in the ballroom with the pro-ams completing all of their Smooth heats.  We thought the best event of the day was the Open C smooth Scholarship that had three rounds.  The winner was Hope 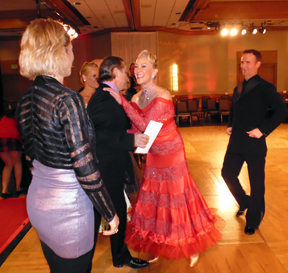 Huber w/ Troy Baeton (1,2,1,1) who gave a very impressive performance.  We were also very impressed with the runner-up, David Schmidt w/ Michelle Hudson (2,1,2,2).  David actually came out on top in the Dancesport Series qualifier, but lost out on the money here.  3rd in all dances was another good competitor, Penelope Rostad w/ Nikolai Karchev.  Penelope also won all dances in the Senior Open Smooth.  2nd in this was another good gentleman student, Norio Yamamoto w/ Anna Shabazyan (2,2,2,3).  3rd was Judy Brown w/ Marcin Tomaszzewski (3,3,3,2). The A & B Open Scholarships were both straight finals.  Melonie Kumer 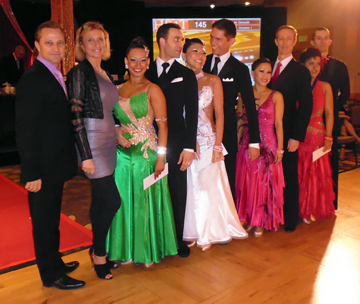 w/ Max Sintisa won all dances in the A.  2nd in all was Irene Lee w/ Nick Cheremukhin and 3rd in all Kelly Morikawa w/ Jonathan Atkinson.  Max Sinitsa’s student also won the Open B and this was Sirinda Sincharoen (1,1,1,1).  2nd was Karence Chan w/ Paul Cloud (2,3,2,2) and 3rd, Monica Broch w/ Kris Suakjian (3,2,3,3). Stay tuned for the Rhythm divisions tomorrow.