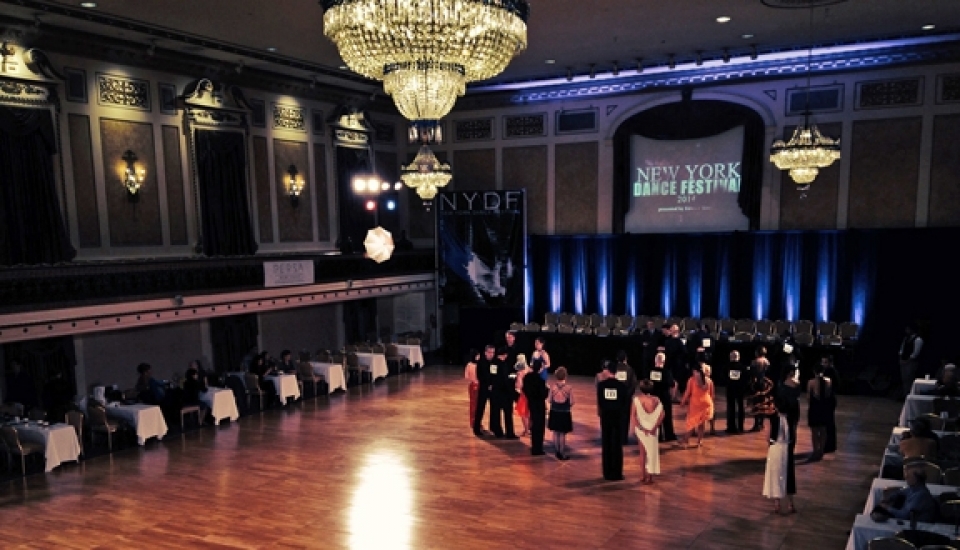 The Duke Comes to NYDF Well!  His orchestra anyway! 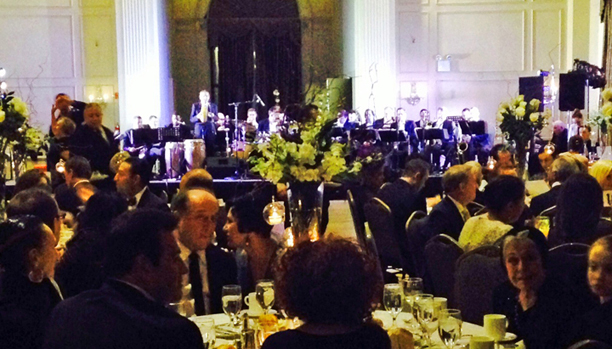 Last night between 6 and 8 PM the Duke Ellingnton Orchestra played for a splendid TAP (The Alzheimers Project) benefit dinner and silent auction in a second beautiful ballroom of the Roosevelt Hotel.  It was a fabulous affair with a banquet dinner and entertainment. 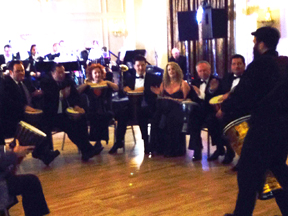 The judges were one of the attractions as they were all given drums to show how drumming is used to treat Alzheimer’s patients.  Eddie Torres and his son also performed an “old-style” salsa to the live music (which they reprised later the same night at the competition). "The only way to make sense out of change is to plunge into it, move with it, and join the dance" But back to the competition – last night it was the turn of the Smooth and Latin professionals.  We thought the Smooth offered the most entertainment with a full semifinal to start.  Travis & Jaimee Tuft won all dances but it was a tough fight with runners-up, Nick Cheremukhin & Viktorija.  The Tufts took the waltz by 8 first places to 7, the tango by 8 to 6, the foxtrot was a 7 to 7 tie and the Viennese again by 8 to 7.  An excellent duel indeed!  Sergey Barsukov & Maria Sidnjova took all the 3rds, Michael Koptke & Chelsea Farrah were 4th (5,5,4,4); Morten Jensen and Tonja Martin took 5th (4,4,5,5) and Serge & Yana Nelyubov were 6th. 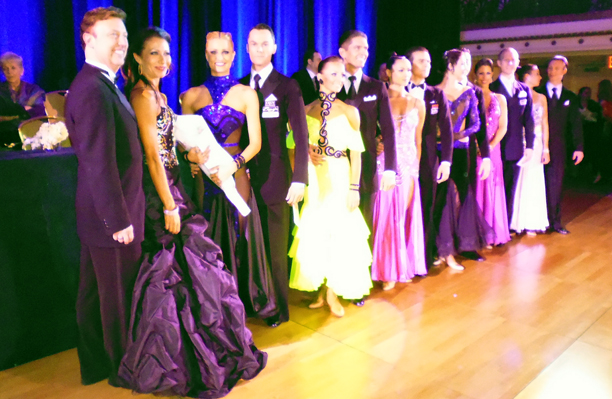 Dmitry Nikishkin & Olena Shvets had an easier time in the Latin, which was a 7-couple final, 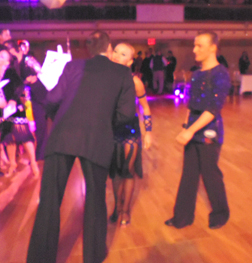 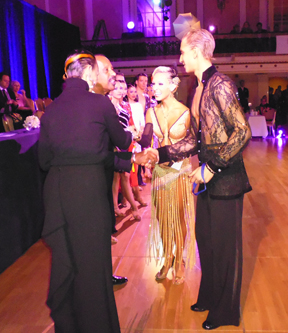 "Work like you don't need the money. Love like yu've never been hurt. Dance like nobody's watching" In the Amateur Smooth an anonymous sponsor offered to pay the way of the top 2 couples to the NDCA Amateur Championships in Provo.  Mayo Alanen & Michelle Officer, who also sponsored the Pro Smooth, increased that to include the 3rd couple.  The lucky three were winners Paul Ferris & Kelly Glasheen, 2nd placed Jason Seabury & Nonie Shiverick and 3rd placed Zachary Lapidus & Emi Terasawa. 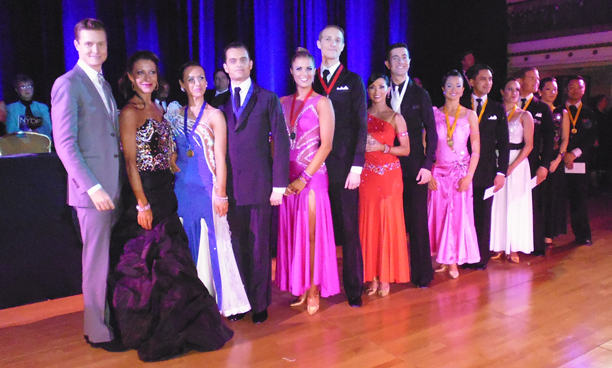 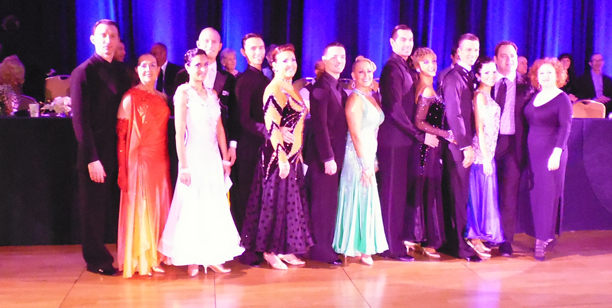 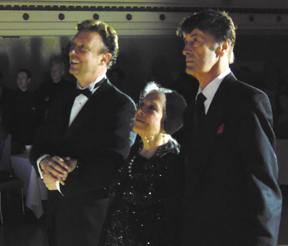 Hollywood screen star Marge Champion was in the audience and Edward Simon presented her with a special achievement award after Gary Pierce had introduced her and we all saw two of her famous dance routines with husband Gower.  Edward also awarded an “Unsung Hero” award to scrutineer extraordinaire, Marie Fantini.

"Never give a sword to a man who can't dance." 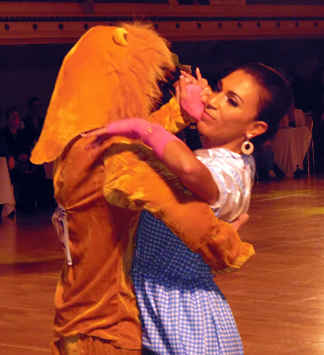 Barking Up the Right Tree!
Last night at the New York Dance Festival there were two foundations that benefited from some exposure.

One of them was Ballroom Barks a foundation set up to rescue abused and abandoned dogs. It was a dance competition but all done with humor and theme most of the participants wore dog costumes and even the judges got into the act by barking up a storm.  Yvonne Marceau, cabaret great from yesteryear was also in the house to introduce some children from the Dancing Classrooms project that has introduced ballroom dancing to state schools nationwide."Life is the dancer and you are the dance." 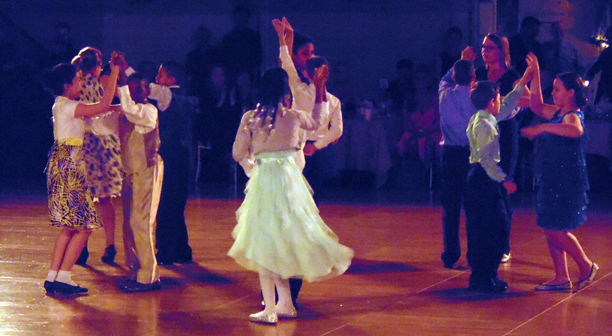 But the main features were the Professional Ballroom, Professional Rhythm and Cabaret gaving the New York, dance-savvy audience something to enjoy. All three events were excellent, filled with great talent and major expectations. The Professional Ballroom had a brilliant final with many of the couples fighting for first place. Unfortunately only one couple could take the top spot and that was Egor Abashkin & Katia Kanevskaya who overall won all dances. Igor Mikushov & Ekaterina Romashikina placed second in all dances and Emanuele & Francesca Pappacena took the thirds. From here on it was very evenly contested. Oscar Pedrinelli & Lenka Kovalcikova were fourth but as you will read did not take all the fourths (5,4,5,4,4) and Samuel Pacchini with his new partner Anna Oblakova were fifth (4,5,4,5,5). This new young lady was the talk of many in the audience who were thrilled with her responsive and pliable performance. Nazar Batih & Mariko Cantley were sixth (7,7,6,6,6) and Ruslan & Katusha Wilder placed seventh (6,6,7,7,7). 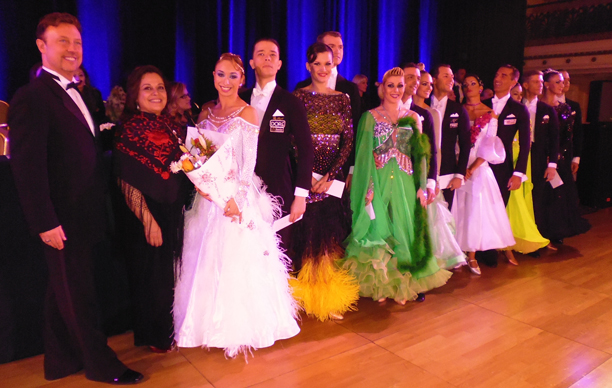 The Rhythm category was heated up the duel for supremacy in this field between US heirs-apparent, Emmanuel Pierre Antoine & Liana Churilova and Nazar Norov & Irina Kudryashova. On paper Emmanuel & Liana won the event with huge majorities of firsts in many of their dances. However, when you spoke to the educated audience present, many would have been equally happy to see Nazar & Irina in that top spot. The fantastic thrill for us is that this category has now more excitement that we have seen in the past 6 years and it is great for the fans and even for us who are used to the game.  Moving up the tree to 3rd were Vard Margaryan & Sofya Fil, 3,3,5,3,3.  This put them ahead of Azamat Evgamukov & Kateryna Angelone 4,4,3,4,4.  Strangely Azamat & Kateryna had more "3rd or better" scores than Vard & Sofya but often 1 short of the majority of 9 needed for 3rd place.  Shane & Shannon Jensen were 5th 5,5,4,5,5 and Matt Hauer & Lauren Schelfhaudt were 6th. 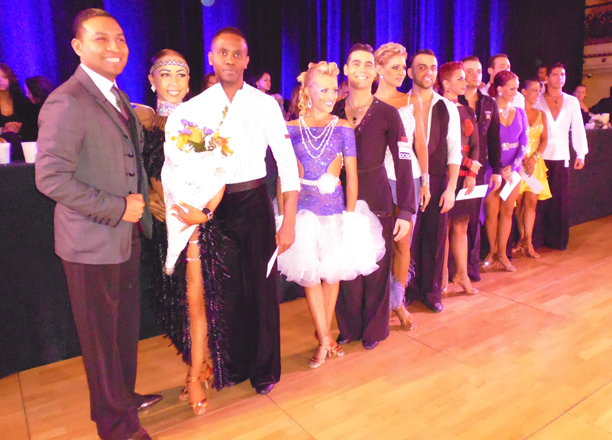 The Cabaret ended with a prolonged standing ovation for the winners, 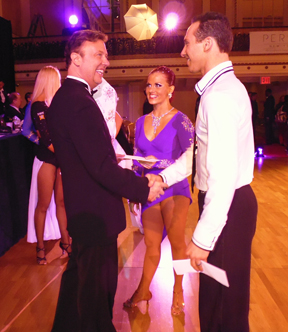 Shane & Shannon Jensen who received 14 of the 15 first places from the judges.  We have seen them perform this routine a little better as Shane almost tripped at one point, but it still a very impressive number.  2nd were Travis & Jaimee Tuft who also get stronger and stronger in this style.  3rd spot, performing a Latin showdance, were Hayk Balasanyan & Emila Poghosyan;  4th Vincent Antonelli & Stephanie Falciano and 5th Igor Gayenko & Sarika Hudson. The Amateur Ballroom was a straight 5-couple final and the easy winners wereYuriy Nartov & Yuliya Blagova.  They took 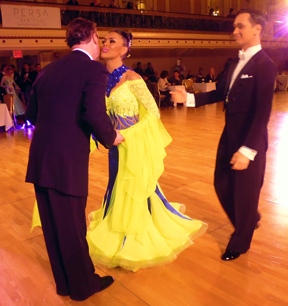 most of the judges’ first places and won all dances.  The remaining couples shared the judges’ score without much consensus.  Taking 2nd were Samuel Hacke & Katarina Hermanova 2,3,2,2,2.  Samuel & Katarina also won the Youth Ballroom earlier in the evening.  3rd were Justin Lin & Sasha Dubinsky 3,2,3,3,3;  4th, Alec Zhiwei-Zhang & Klaudia Khuzinski and 5th Cezary Dryda & Jennifer Chin. For the pro-ams is was a full day of Rhythm heats.  The well-contested open scholarship began with a 16-couple semifinal.  The winners, in all dances, were Elena Cormio w/ Edwin Torres.  Taking 2nd was Phillip Widlanski w/ Jolanta Mosteika (2,2,2,2,3) and 3rd was Renee Kuwahara w/ Ilya Reyzin (3,3,4,3,2).

Having A Ball in NY – F Eddie Simon’s New York Festival is ongoing in the heart of Manhattan, NY, at the historic Roosevelt Hotel, near Grand Central Terminal (not Station).  Even the weather warmed up! The first day of competition was about international style in the pro-am divisions.  Both styles took place yesterday.  Both Open Scholarships gave us some good competition. In the evening it was Rising Star night with all 4 divisions showing last night.  This resulted in 3 straight finals with a semifinal in the Smooth.  Kyle & Allie Spinder (CA) were the sinners of this Smooth division.  They won all dances, but waltz and Viennese Waltz were close with the runners-up, Sergey Barsukov & Maria Sidnjova (FL) who were 2nd in all dances.  3rd in all were Serge & Yana Nelyubov (NY). 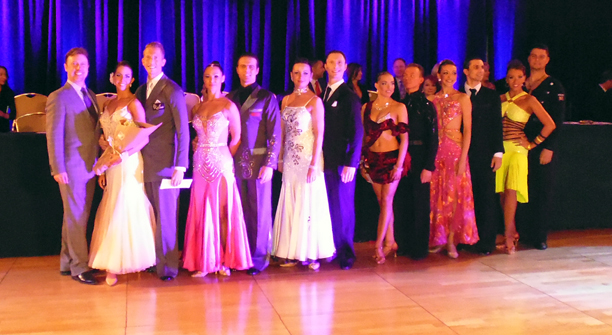 In the Rhythm we saw a reversal of form from 2 weeks ago in Maryland.  This time Shane & Shannon Jensen (CT) were the winners over Andrey Svirydzenka & Yuliya Zubova (NY).  Shane & Shannon won all dances.  3rd tonight were Romney Reyed & Brooke O’Donnell (FL) 3,3,4,3,4.

Riccardo Pappi & Sabrina Moretti were the winners in the RS Latin, taking all dances with the majority of 1st places in all dances.  Dmytry & Nina Kovalenko were 2nd in all.  After that it was much more mixed, but taking 3rd were Srdjan Mikuljan & Carolina Avila 5,4,3,4,3.

In the Ballroom Open Scholarship Celia Chou w/ Erminio Stefano was the winner.  She placed 2,2,1,2,2.  Celia had the majority of 1st place marks in the 4 dances she won, including a perfect 7 1st places in quickstep.  2nd, but winning the VW was Brinda Insley w/ Martin Reinbold 3,2,1,2,2 and 3rd was Carrie Steinmetz w/ Ruslan Wilder 2,3,3,4,4.