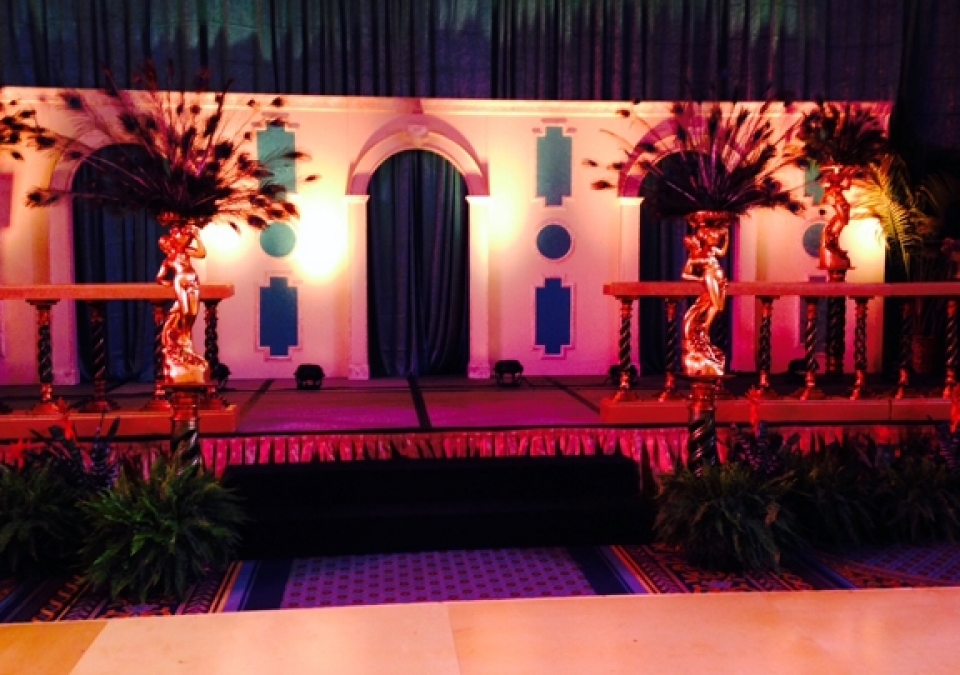 Michael Malitowski & Joanna Leunis, the current Open British Pro Latin Champions, withdrew from the Pro Latin at the Killick Kalssic last night after dancing only 1 round (of 4 rounds total for the event).  Joanna injured her foot and was unable to continue.

Although this was a disappointment, the competition was still one of the best of the year so far and the atmosphere was so highly charged nobody complained about how loud the music was! 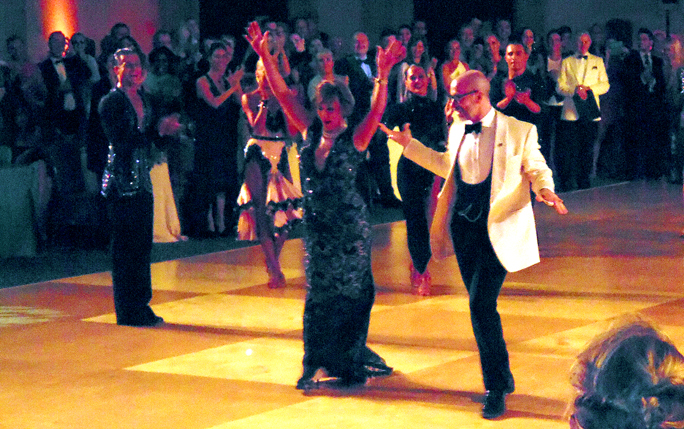 Maurizio Vescovo & Andra Vaidilaite (Canada) benefited the most from Michael & Joanna’s withdrawal as they were now clear favorites and won all 5 dances.  They gave an absolutely brilliant display of fast-paced and sometimes lighthearted Latin dancing that the audience adored.  Maurizio led the finalists in an impromptu jive following the end of the final and even organizers, Paul Killick and Shirley Ballas joined in.  Maurizio also led a conga line following his honor dance to close the night! 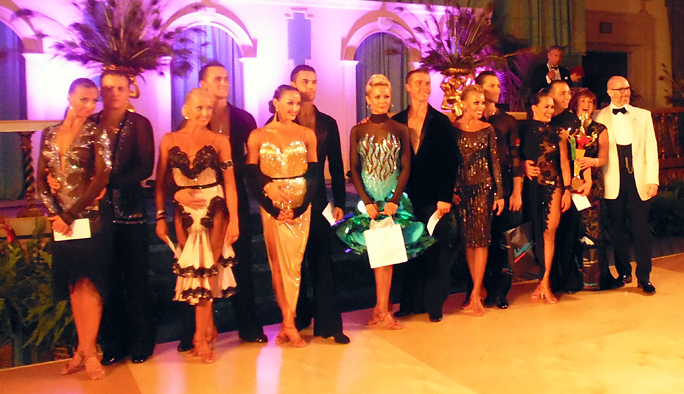 With 2,2,2,3,2, Mirko Rizzi & Maria Emanchkova (England) took 2nd.  Not long out of the amateur ranks, this couple were also on fire tonight.  We loved Maria’s tough new look.  Taking that 2nd in the paso and 3rd in the other dances were Nikolay Voronovich & Maria Nikolishina who also looked confident tonight.  Manuel Favilla & Natalia Maiuk (Ukraine) were 4th with 4,4,4,4,6 and right behind them and with a stronger result tonight that some recently, Ivan Mulyavka & Loreta Kriksciukaite were 5th 5,6,5,5,6.  Closing this great final were Vitalii Proskurin & Eugenia Shatlilova 6,5,6,6,5. 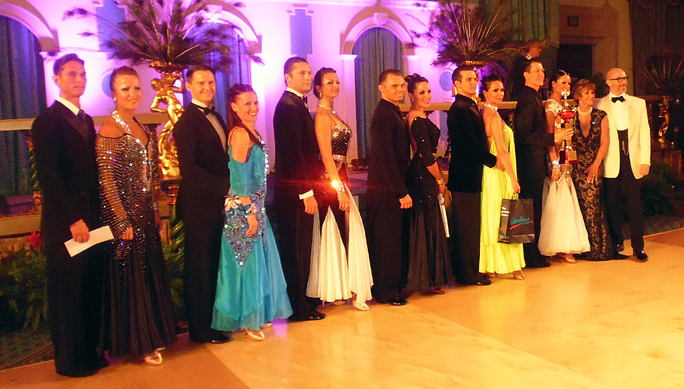 Sharing the bill with the Latin was the Pro Smooth and this began with a semifinal.  Peter & Alexandra Perzhu won all 4 dances.  Finishing strongly and earning a lo of after event praise at the after-party were Sergey Barsukov & Maria Sidnjova, they took 2nd overall with 2,3,2,2.  3rd tonight went to David & Natalie Shulz 3,2,3,3.  Vladimir & Vera Kosarev took all the 4ths, Andrei & Elena Rudenko all the 5ths and Vladimir Popov & Anastasia Kazmina all the 6ths.

There was a straight final in the Youth u/21 Latin also and this was dominated by Canada who took the top 2 places.  Adam Hathazi & Morgana Lakatos-Hayward won all dances and Nurlan Galyamov & Jessica Swietonowski took 2nd 3,2,2,2,2.  3rd spot went to Dmytry Dmytrnko & Cheyenne Murilli 2,3,3,3,3.

During the day the pro-ams were in Ballroom mode.  The Open Scholarships proved successful for professional Andrea Faraci whose students won 2 divisions and took 2nd in the other. Laura White won the B and Effy Weisfield took the C.  Rebecca Kuhn was the runner-up in the A and the win went to Ashley Kruger w/ Misha Vlasov.

Watch out for a full report on the KK coming soon in Dance Beat with individual reports by Corky Ballas and Barbara McColl.

Dancing With The Stars! 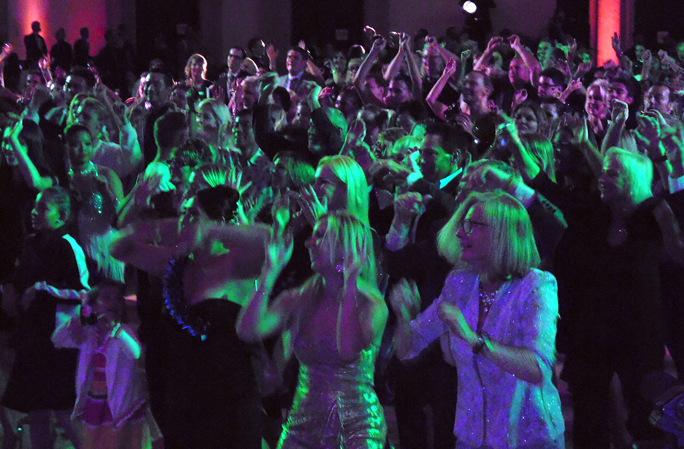 ildly cheering fans, Derek & Marc danced several upbeat routines – Marc performing to a medley of his own music – “Get My Name” and “Miss Incredible.”  3 Miss Incredibles were selected by Marc  to receive prizes donated by Vesa Designs.  The grand “Miss Incredible” award went to Shiela Davis from Florida. 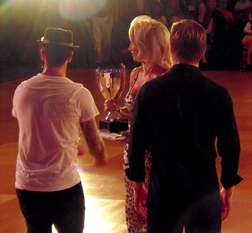 We were so impressed by the professionalism of these two young men – it was a great interlude that really wowed the audience.  Derek & Marc also judged several of the competitions and were joined by fellow DWTS professional, Tony Dovolani who just happened to be in the area. 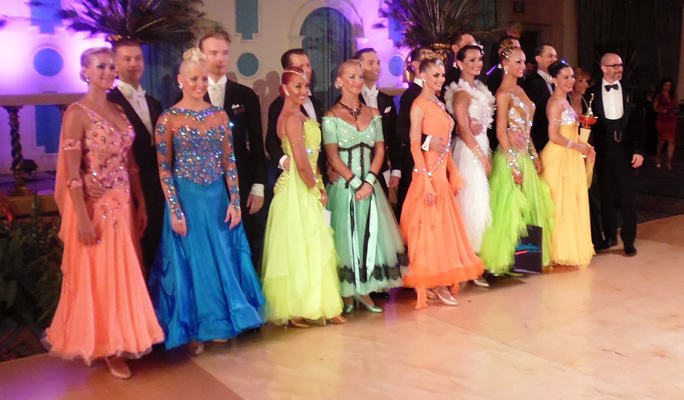 The Pro Ballroom was a high quality 8-couple final.  The winners easily were Marat Gimaev & Alina Basyuk who won all dances and received 11 first places out of 13 in all dances except quick step where they received 12.  The only judge to place them not first in all dances was Bob Powers who placed them 3,4,3,3,3.  The scores for the remaining couples were very mixed.  2nd in all dances and receiving the majority of “2nd or better” scores in all dances, were Anton Lebedev & Anna Borshe from Canada.  But they had the full gamut of judges’ scores down to 8th place.  3rd in 4 dances and 4th in QS – and on a US Tour it seems, were Igor Kobiuk & Lillia Galdiuk from the Ukraine (could we soon be seeing a new import to the USA?).    Oscar Pedrinelli & Lenka Kovalcikova were 4th in 4 dances and took the 3rd in QS.  Igor Colac & Roxanne Milotti were 5th in all: Simeon & Cora Stoynov were 6th 6,7,6,6,6;  Pavel Kuzmin & Marsha Khazanova were 7th 7,6,7,77 and Anton & Irina Belev were 8th. 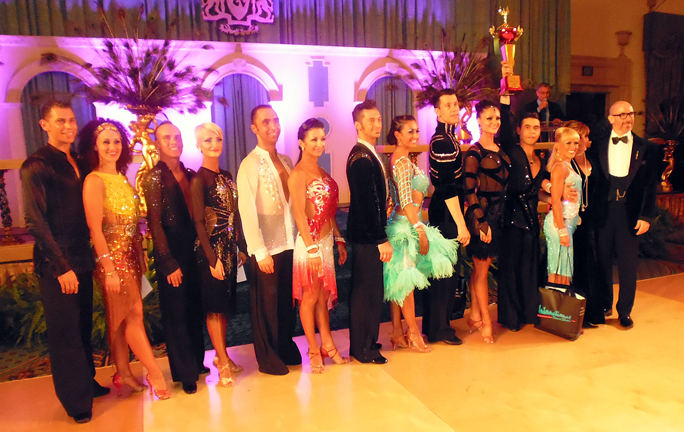 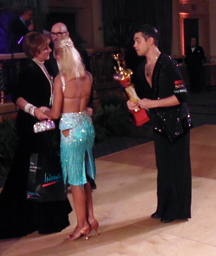 e Rhythm it was the battle Royal of the Florida superstars, Nazar Norov & Irina Kudryashova and Peter & Alexandra Perzhu.  The judges awarded Nazar & Irina their best win too date – giving them all dances with a large majority of 1st places.  Peter & Alexandra were 2nd in all dances. In fact it was an “all Florida” final.  Misha Vlasov & Vanda Polakhova were easily 3rd in all dances.  The judges were quite decisive in this division – all couples finished in the same position in all dances.  4th – Shanor Shtefil & Aleksandra Barsukov;  5th – Tams Kardos & Mariya-Khristina Shurupova;  6th Vicente Martinez & Meagan Murphy. 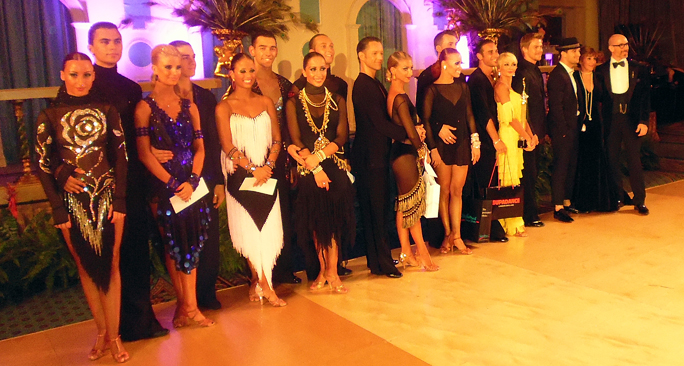 The Amateur Latin was a highlight for us.  The winners were NDCA US Champions, Ferdinando Ianncone & Yulia Musikhina who won all dances with a large majority of 1st places.  This was the best we’ve seen them dance in some time.  Perhaps they were reacting to the electric atmosphere!  (And the great music – giving ourselves a pat on the back !).  From Italy Manuel Frighetto & Karin Rooba took 2nd.  They placed 2,2,2,3,2.  They had the most 2nd  better places in all dances but the majority in only 4 but some 4th placements in paso doble allowed 3rd placed, Pasha Pashkov & Daniella Karagach to slip ahead in that dance.  They scored 3,3,3,2,3 overall.  The remainder of the final finished in the same position in all dances.  Pasha Stepanchuk & Anastasia Danilova 4th;  Evgeny Raev & Patricya Golak 5th and the final closed with 2 couples from Canada – Adam Hathazi & Morgana Lakatos-Howard 6th; Nurlan Gallyamov & Jessica Swietonowski 7th. 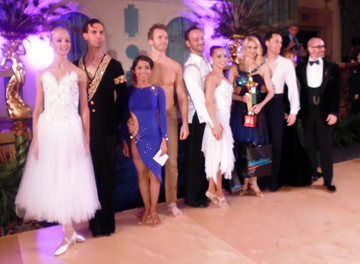 & Jaimee Tuft were very clear winners for us in the Cabaret with their routine, “Return” one of their best we think.  2nd were Clifton Sepulveda & Mar Martinez;  3rd Daniel Erskat & Ahtoy Wonpat-Borja;  4th Paolo & Liene DiLorenzo.

There were also 2 Rising Star divisions, both well-contested, although we felt the Latin was the stronger.  Sergiy Barsukov  & Maria Sidnjov won the Smooth 1,1,1,1.  2nd Stephen Smyth & Viktoriya Kleyman 2,2,2,2 and 3rd Andrei & Elena Rudenko 3,3,3,3.

It was a VERY busy day for the pro-ams who danced 2 full styles – Smooth and Latin.  The Latin, as might be expected here at the KK, was especially strong.  In the Open Scholarships (Latin), danced at night the results were: 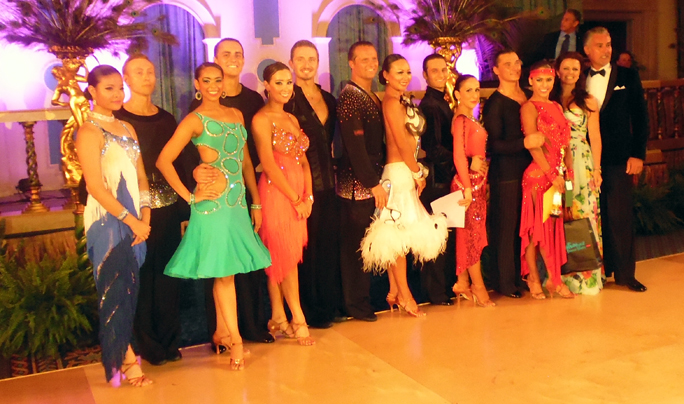 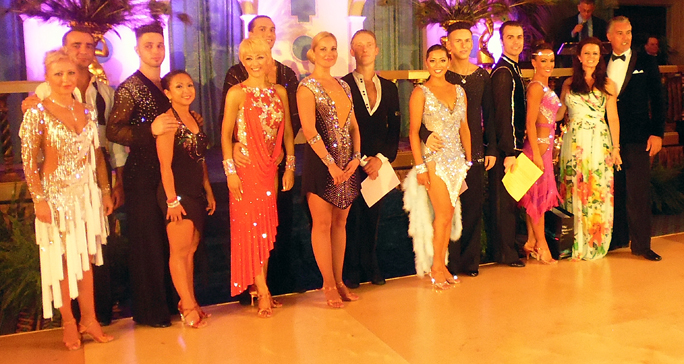 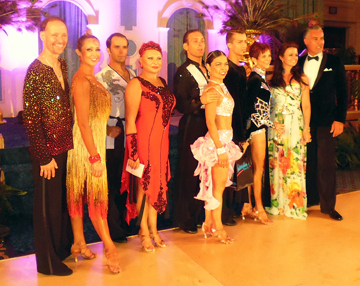 The Open Smooth Scholarships took place in the afternoon and the results were: 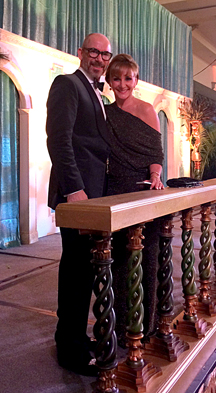 The Killick Klassic is back after missing a year in 2013 – but there have been some changes.  Joining the founder, Paul Killick, as a co-organizer this year is Shirley Ballas.   Also changed is the venue – this year the event moved to the venerable Boca Raton Hotel, situated on the Intracoastal Waterway in Boca Raton, FL.

otel is one of the society fixtures of Palm Beach County and its history dates back to 1926.  As you might expect, the fixtures of the hotel are period and that includes the décor of the ballroom.  The Killick Klassic has completmented this traditional style with “flowers and feathers.”

Today was really all about Rhythm.  The pro-ams danced rhythm all day and concluded the style with the open scholarships in the evening.  Also in the Rhythm style, the main event of the night was the Rising Star Rhythm, that began with a semifinal. 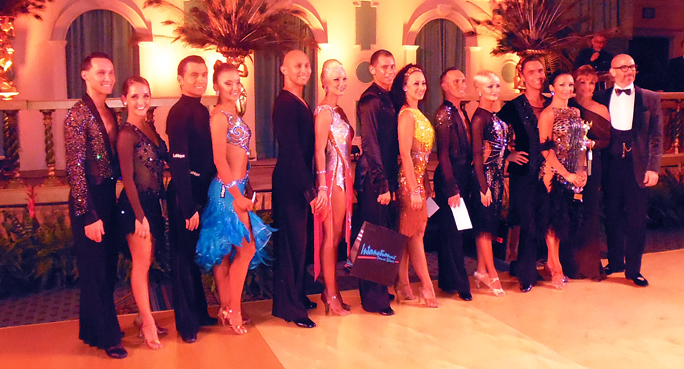 Clear winners of the RS in an all-Florida final were Shandor Shtefil & Aleksandra Barsukov who won all dances.  Equally clear with all the 2nds were Tamas Kardos & Mariya-Khristina Shurupova and with all 3rds Vicente Martinez & Megan Murphy. 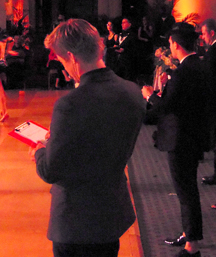 cluded on the judging panel was Shirley’s son Mark Ballas and her “adopted” son Derek Hough – stars of TV’s Dancing With The Stars who are also here for two meet and greet sessions.

The largest of the Open Rhythm Pro-Am Scholarships was in the C Division, beginning with a semifinal and this fell to Dianne Caracciolo w/ Nazar Norov 1,1,1,1,2.  Dianne has improved dramtically over the past year and her smile is infectious.  Another very strong lady, Gracelyn Tuoti w/ Andrei Abrashin was 2nd 2,2,2,1.  Taking the 3rd spot, Janet Bruttel w/ Michael Neil 4,4,3,3,3. 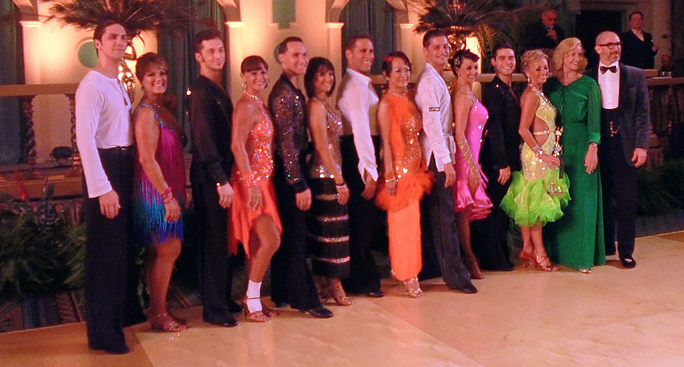 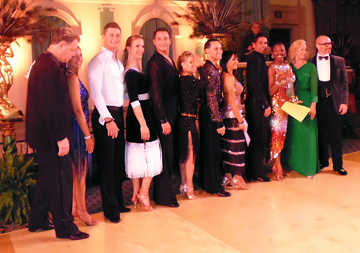