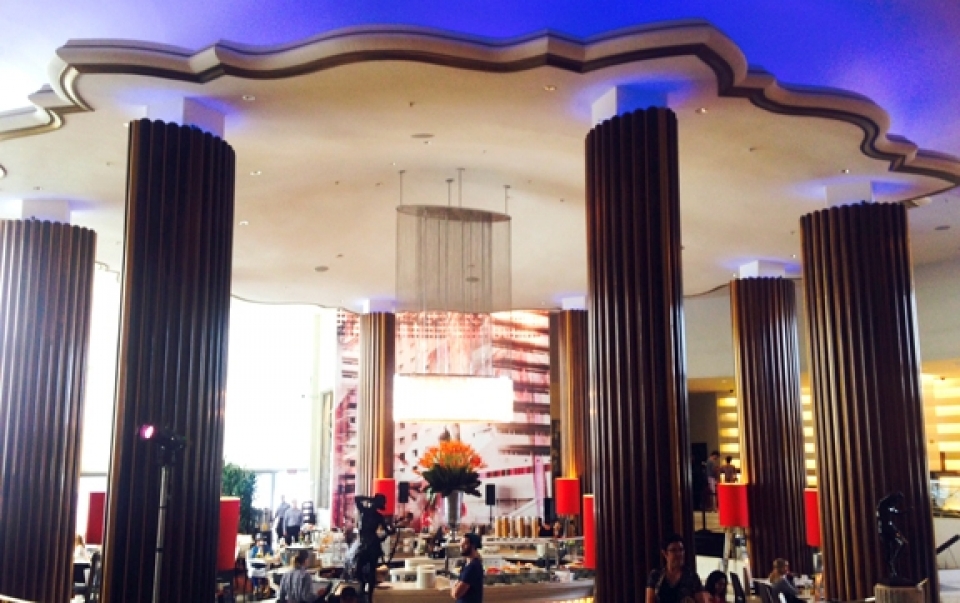 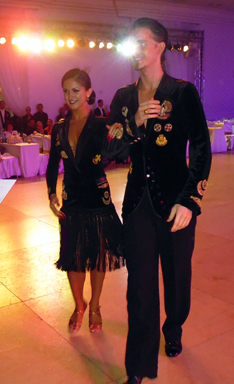 e felt the Amateur Latin was the headline event on Saturday night here at the Miami Vibe.  It was the only event to begin with a semifinal and several countries were represented.

Every couple entered was of a high level and the final six were outstanding.  Winning all dances tonight were Denmark’s Morten Lowe & Roselina Doneva.  As usual we liked their dancing a lot, but although they won all dances they had the majority of 1st places in only samba and paso doble.  In fact they picked up marks all over the board including a few 6th places.  We were surprised by this disparity.  Actually many of the couples shared in the 1st places.  2nd tonight were Slava Visnakovs & Tereza Kizlo from Latvia 3,2,3,2,3.  We liked this couple, they were neat but not overly showy.  3rd place fell to the USA in the persons of the new tam of Alexander Chernositov & Arina Grishanina 2,3,2,4,4.  This was a great result for this new team – several steps better than their last showing in Provo.  Vladimir Litvinov & Olga Nikolajeva from Russia were 4th 4,4,4,3,2.  Placing 6,5,6,5,5, Pasha Stepanchuk & Gabriela Sabler were 5th.  We thought they would place higher and indeed some judges agreed with us.  Closing the final with 5,6,5,6,6, were another great new partnership, Austin Joson & Nino Dzneladze. 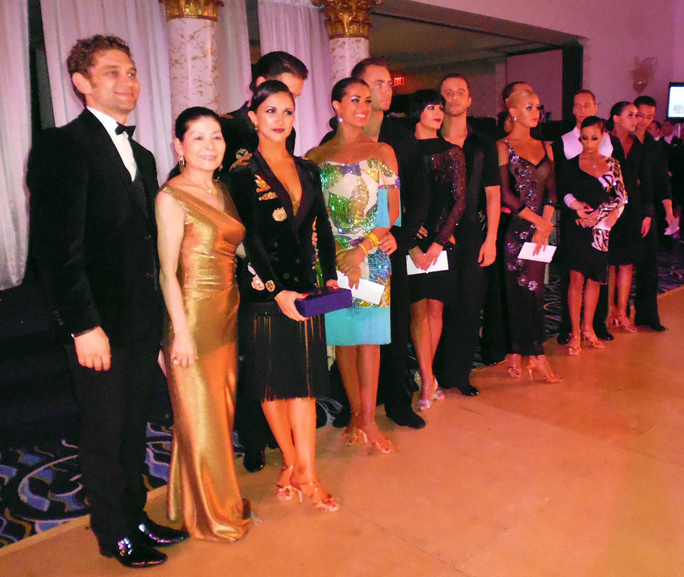 Alexander Voskalchuk & Veronica Egorova won the Pro Ballroom quite easily, although they did receive a few scores in the lower half of the final.  The judge who favored them the least was Marc Nocera who scored them 5,4,5,4,2.  2nd went to Rudiger Homm & Katia Kanevskaya with 2,2,3,2,2.  Ronen Zinshtein & Mariam Izmaylova, who we feel were the most musical couple in this final, were 3rd with 3,3,2,3,3.  The remaining couples all finished in the same position in every dance.  Nazah Batih & Mariko Cantley 4th;  Aleksandr Skriptsov & Aida Skriptsova 5th; Pavel Cherdantsau & Svetlana Rudkovskya 6th;  Dmitry Solomakha & Gabriella Sevillano Solomkha 7th. 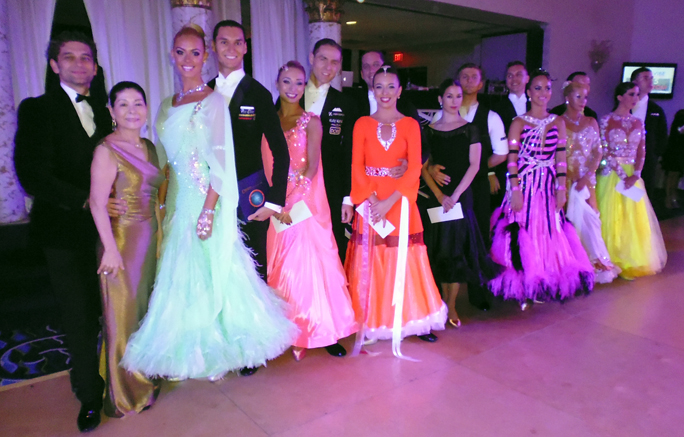 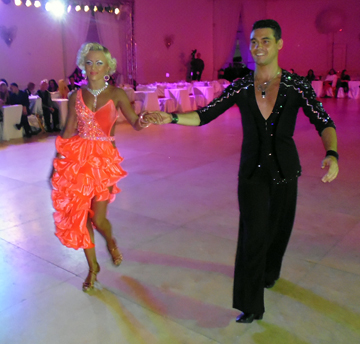 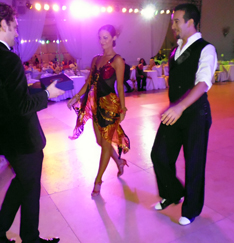 n Cordosa & Noelia Guerrero won the Cabaret with their fiery Argentine Tango.  Although we are not always a fan of this genre, this pair does and outstanding job.  Clifton Sepulveda & Mar Martinez were 2nd and perhaps could have won the division, but one missed lift marred their performance.  Slava Panakshev & Daria Cebotary were 3rd, Nazar & Mariko were 4th and Richard Ortiz & Hannah Pickard were 5th.

The evening closed with a show themed around Alice Through the Looking Glass and featured the Perico Ballet troop and Miss Connecticut playing Alice.  Our favorite number was Vibeke Toft as the Evil Queen with her Latin minions!

The Lights go out on Vibe?
Not! 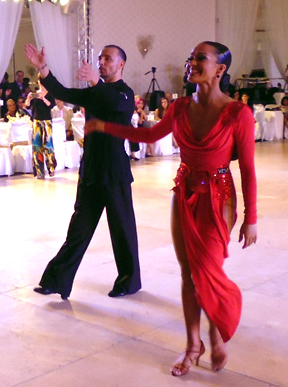 A momentary light failure meant that the professional danced about 20 seconds in total darkness during the Open Latin final, but the lights were certainly not out on this event last night.

Mauritzio Vescovo & Andra Vaidilaite, world finalists and Canadian Champions, delighted the crowd with spectacular energized dancing to win the event easily.  We were a little surprised that they did pick up 3 second placements, 2 of them from judge, Shirley Johnson.  Receiving nothing lower than 2nd place and 3 first places, the runners-up were Dmitry Nikishkin & Olena Shvets.  From here on down the judges were a little undecided but 3rd placed Aleksei Alekseev &  Ekaterina Dereleva had the majority of 3rd places in 3 dances and placed 3rd in all dances.  Vlad Astafiev & Jenya Didenko were 4th 5,4,5,4,4;  5th Dmitrii Zavialov & Ashley Sanchez 4,5,4,5,5;  6th Dimitriy Solomakha &  Gabriella Solomakha 6,7,6,6,6;  7th the Netsvetasev from Russia 7,6,7,7,7. 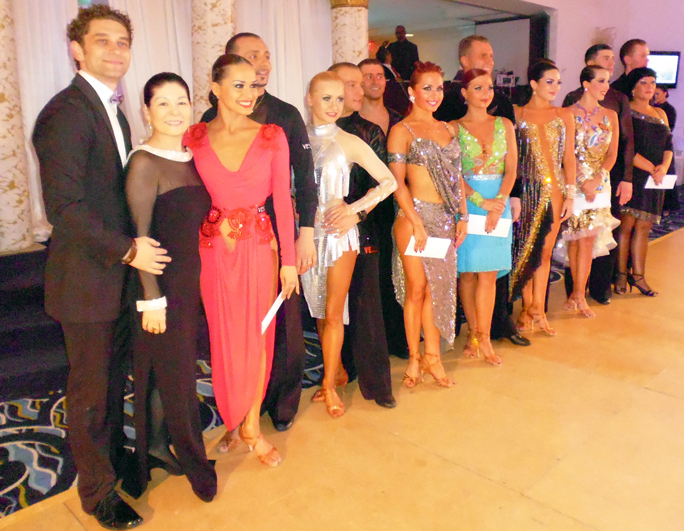 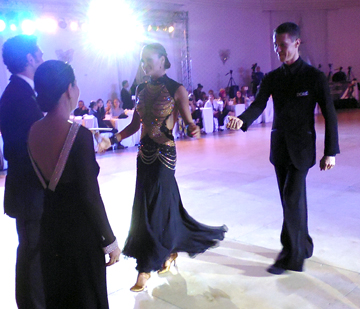 e USA’s 2 leading couples turned out for the Open Pro Smooth and the result went to the US Champions, Peter & Alexandra Perzhu.  They had a perfect score in the tango and lost only 5 first place marks over the other 3 dances.  We thought they were in good form last night.  Mikhail & Galina Zharinov were similarly successful in 2nd position.  Galina was we

aring a knee-length, simple white dress.  Are we seeing a change in style for the American Smooth?  3rd in all dances were Andrei & Elena Rudenko, a strong finish for them.  4th in all went to Vlad & Vera Kosarev who we thought had a good night as well.  WE saw a reversal of fortunes from the Smooth RS division for 5th and 6th as today Radek Wiatrowski & Denise Sobiewski placed 5th in all dances, ahead of Shandor Shtefil & Aleksandra. 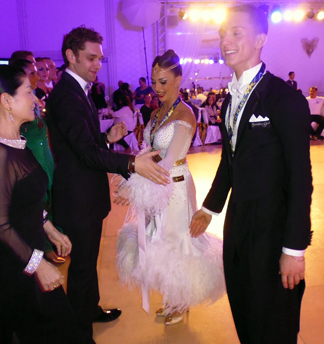 The night began with a pro-am solo competition that was judged by the audience through a text voting system.  7 couples competed and the winner was Jake Monreal w/ Ashley Sanchez and very lively and talented young man indeed. 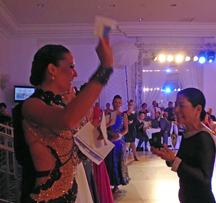 he finalist ladies in the Open Amateur and Ballroom divisions all weekend were invited to a drawing for a piece of jewelry designed by Marico Hosoi following the announcement of their results.  There wre some very happy lady competitors this weekend!

Also providing entertainment between the professional rounds was the Perico ballet company.

Andrew Phillip’s Miami Vibe (formerly known as the Miami Open and Sunshine State) is ongoing and vibrant on beautiful Miami Beach (OK we’re a little biased because we live here!).  The setting is architect, Maurice Lapidus’ MIMO masterpiece the Eden Roc Hotel – beautifully restored to much of its former grandeur.

Yesterday got under way with the Pro-Am Ballroom divisions and all 4 Pro Rising Star divisions at night.  The 2 American style RS both had semifinals. 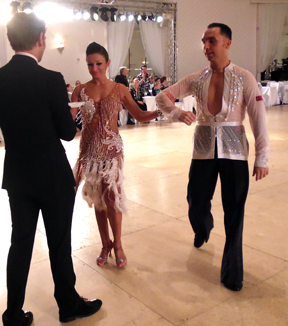 e Rhythm was the first and largest division to take the floor.  Winning tonight were Shandor Shtefil & Aleksandra who placed 1,1,1,1,2.  They won all their dances with the majority of 1st places except the rumba.  Winners of the mambo were Maksym Lototskyy & Sarah Haworth and they placed 2,2,2,2,1.  Both of these top couples picked up some random scores in the lower half of the final.  After these first two the scores became very random.  3rd with 3,4,3,3,5, were Tamas Kardos & Mariya Khristina Shurpova;  4th Strahinja Lackovic & Irina Fedosova 6,3,4,6,3;  5th Vicente Martinez & Megan Murphy 5,5,5,4,4;  6th Eddie Rivera & Meg McNash 4,6,6,5,6. 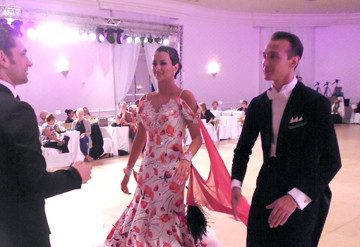 s the ballroom and this had easy winners in Vlad Shahov & Ekaterina Popova who won all dances and lost only 3 first place marks total.  2nd in all were Aleksandr Skriptsov & Aida Skriptsova, 3rd in all Dimitriy Solomakha &  Gabriella Solomakha and 4th in all William Proper & Jennifer Elliott.

The Latin was also a 4-couple final but the results were more mixed.  The winners placed 1,3,1,1,2 and they were Aleksei Al 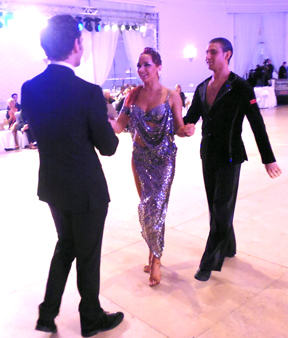 ekseev &  Ekaterina Dereleva.  Winners of the jive, Vlad Astafiev & Jenya Didenko took 2nd overall with 2,2,3,2,1 and the winners of the Samba, Dmitrii Zavialov & Ashley Sanchez were 3rd overall with 3,1,2,3,3.  4th in all dances were 10-dancers, the Solmakhas.

Andrei & Elena Rudenko won the Smooth fairly easily with a majority of 1st places in all dances.  2nd in all fell to Radek Wiatrowski & Denise Sobiewski.  9-dancers, Shandor Shtefil & Aleksandra were 3rd with 3,3,3,5.  We had an Italian couple in 4th place, Daniele Scalise &  Alla Andriushchenko 4,4,5,3.  5th were another 9-dance pairing Maksym Lototsky & Sarah Haworth 5,5,4,4 and closing the final were Ryan Kenner & Laura Kenner. 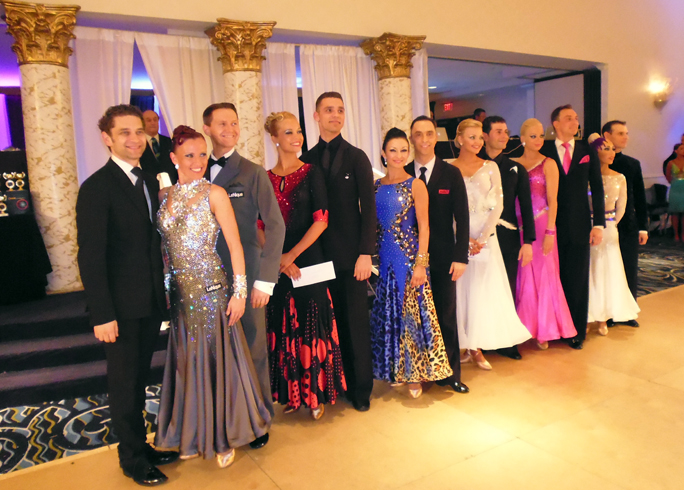 The pro-am ballroom open scholarships in the B & C divisions were quite strong.  The C was the largest and the winners here was Vicki Sato w/ Basil Issaev 4,1,2,1,2.  2nd was April Haims w/ Ruslan Meshkov 1,2,3T,5,1;  3rd Joanne Walford w/ Paolo DiLorenzo 2,3,3T,2,4.  The winners of the VW was Frances Yu w/ Alexander Voskalchuk who placed 4th overall. 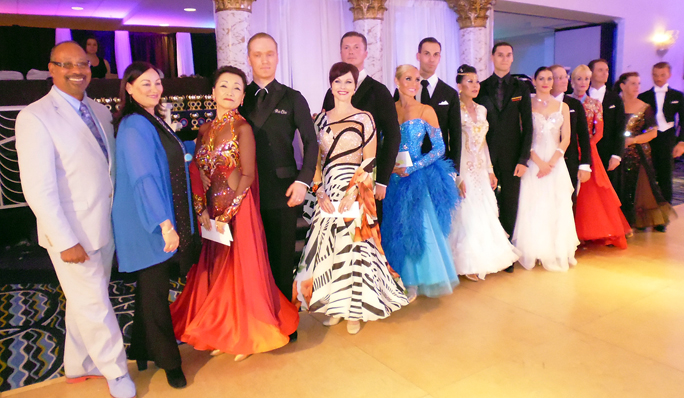 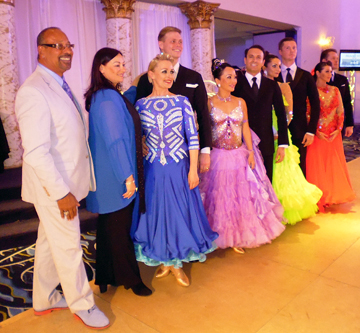