The Judges Are Wild!

The judges last night at the Atlanta Open were in rare form when it came to laying down the marks, most notably in the Professional Rhythm category. 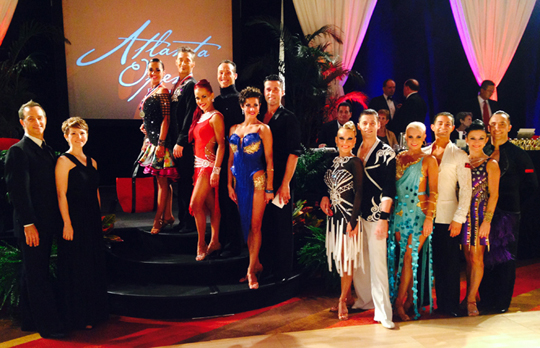 To us and the majority of the judges, Mikhail Vlasov & Vanda Polakova were the obvious winners by placing first 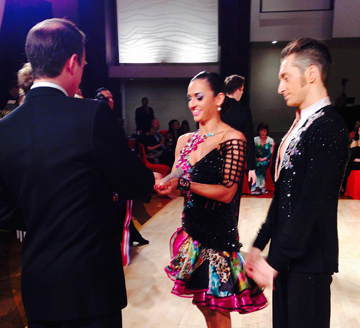 in all dances, with a majority in each dance. However, as usual there is always a judge that would not budge and this time it was Ms. Pat Traymore who could only offer them as their higher marks third in the swing and bolero, but in the rest of the dances she award fifth and fourth place marks. From then on the judges went wild, there were excellent finalist like Riccardo Papi & Sabrina Moretti who did not even make the final cut!

Second overall in the Rhythm went to Shane & Shannon Jensen who  placed second in every dance, however, we must point out that their marks were more varied than those of Mikhail & Vanda.  They got some fifth and fourth, our very own representative Mr. Didio Barrera awarded them 4,4,4,4 and 5th.  Lucky for all as we pointed out yesterday, the system works and the majority ruled and Shane & Shannon were second overall. Third in this excellent heat of Rhythm dancing went to Ivan Dishliev & Marieta Nedyalkova who placed 3,4,4,3,3, last night they sported very simple outfits but their dancing as usual was very consistent and possibly worthy of a higher placement in a few dances.

Fourth was Andrei Abrashin & Maria Gavrylova 4,3,3,4,4, who we were quite surprised to see in the final, not that their dancing was not up to snuff but because there was so many other couples that could easily tempt the judges to go in another direction.  As we mentioned before, there were at least three other couples that we could easily see in this final. Fifth were Donovan Dominguez & Rose Dimov who placed 5,5,5,6,5.  This couple also have been placed higher at least in the mambo. And completing this final in sixth place were Shandor Shtefil & Alessandra who were perhaps one of our favorite couples in this final and who we could have also see higher up the ladder, they took 6,6,6,5,6. 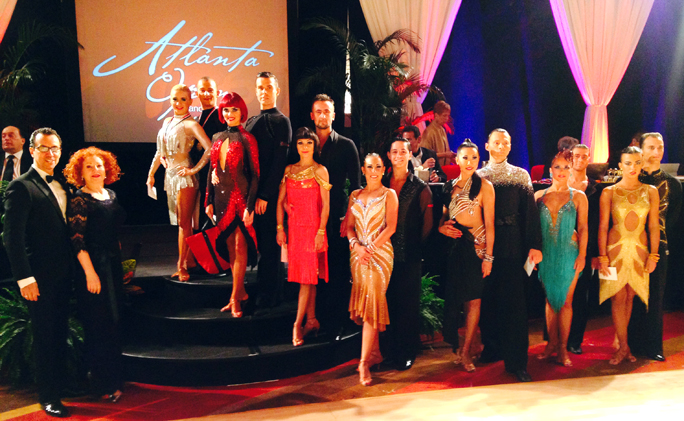 The Professional International Latin was also a good heat and one that shook up things a little. It was a seven couple final and here the obvious winners by far were Dmitriy Nikishkin & Olena Shvets who placed first in every dance. From the moment this couple stepped on to the floor they were the audience’s favorite and the 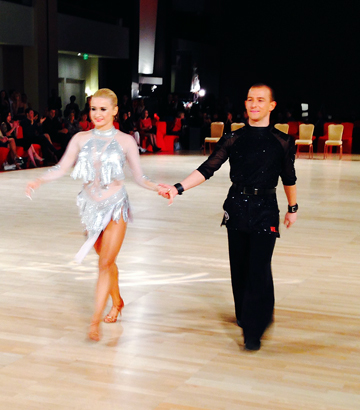 judges’ too.  This is really rare at a competition of this stature but Dmitri & Olena won every dance with perfect scores, not one single second or otherwise was awarded by any of the members of this panel. Second overall also without a surprise for us went to Jake Davis & Alona Kalinina placing second in every dance, we have to say that we feel this couple has made some excellent progress in the last couple of months and it is wonderful to see it being rewarded.

Third was Dmytro & Nina Kovalenko 3,3,4,3,3, fourth went to the Rising Star winners form the night before Felipe Gonzales & Darinka Divljak 5,4,5,4,4, fifth was Andre Strinadko & Ching Kao 4,6,3,5,7, as you can see the judges here were more than split! We also were a little, though here we thought Andre to be the best man on the floor but as a couple we are sure it would be hard to see where to put them in the scheme of things. Sixth were Aleksei Alekseev & Ekaterina Derevieva 6,5,7,7,5, and seventh was awarded to Kharyton & Anastasia Khomenko 7,7,6,6,6. 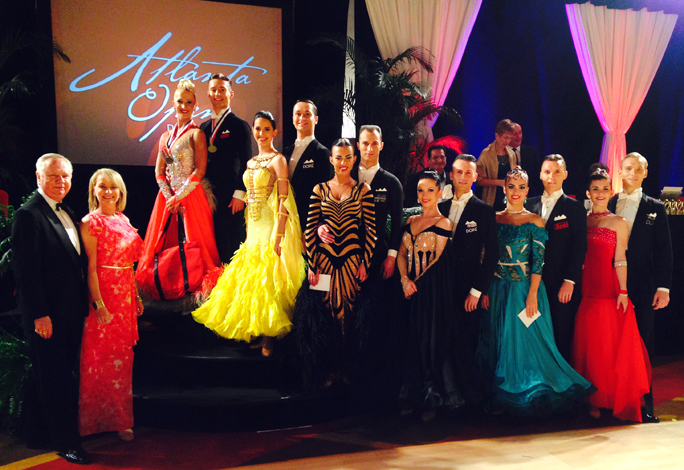 The Professional Ballroom was almost a repeat of the night before in the Rising Stars, except the easy winners were Igor Coloc & Roxanne Milotti placing first in every dance with perfect scores in four dances.  However, when it came to the foxtrot two judges were not convinced.  Linda Dean and Dennis Rogers awarded them second in this dance. Linda & Dennis’ first place marks went to the runners up Yuriy Nartov & Sarika Hudson who placed second in every dance with a majority of second placed marks as well. Third was Khryton & Anastasia Khomenko 4,3,3,3,3. Fourth were Dumitru & Cristina Turcan 3,4,4,5,4, fifth went to Aleksandr & Aida Skripsova 5,5,5,4,5, and sixth was Sergey Izyumov & Ellen Porter plaicn sixth in all dances. 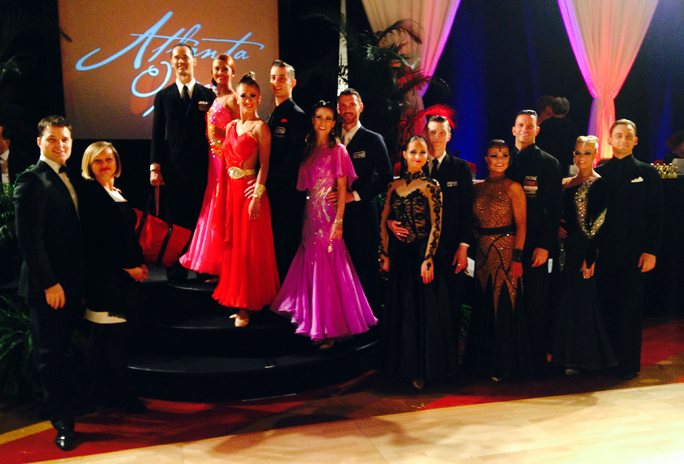 The Professional Smooth was also an excellent heat.  Here Michael Choi & Erin Marie took first in every dance also with a huge majority of firsts from the judges, but as always there is a dissenting judge, in this case there were 2, Eulia Baranovsky who awarded them 3rd in every dance, but their worst marks came from Maria 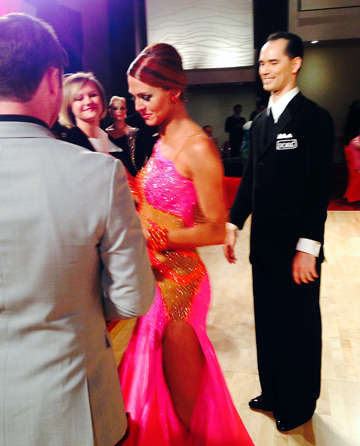 Hansen who awarded them 4,5,4,5, quite low compared to the other minds in the room.  Second place in every dance went to the Rising Star winners from the night before Adrian & Hannah Dydynski and their worst marks came from Pat Traymore who awarded them 6,4,5,6. Third were Mark Short & Alyssa Kark, here we thought they could have easily placed second in a number of dances, their look is a little mature and did not help their cause but their dancing for us was as good or sometimes better than the second place winners.

The Professional Showdance was the last heat to go on at the Atlanta Open and it sure was worth waiting for.  Shane & Shannon Jensen stole the show and took the prize home.  Igor Colac & Roxane Milotti were second. Third was Alfie Perratta & Sloan Cobb, fourth went to Tim Polaschek & Katherine Hutchinson, and fifth were Aaron Stowell & Rebecca Berryhill.

My congratulations to the organizers for putting such a clean cut non-rushed competition.  The hotel is brilliant with plenty of room and accommodations for everyone’s needs. The tower I requested is very private and allowed for total relaxation.  The bar and restaurants were excellent with great service, giving everyone a choice. The city of Atlanta has been known for their southern hospitality and this was a perfect example. 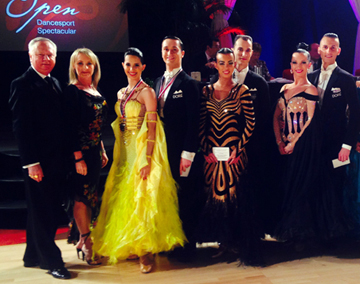 ast night at the Atlanta Open was a night of Rising Stars, all events had a minimum of four couples and both the American style Rhythm and Smooth had healthy semifinals.

The weakest link in entries and in quality was the Professional Rising Star Ballroom this five couple final should we say was a “one man” and a “walk in the park” for Yuriy Nartov & Sarika Hudson who won all dances with the majority of firsts from the judges.  Second went to Kharyton & Anastasia Khomenko who had the most innovative choreography especially in the tango where perhaps some of their moves cost them their second place finish in that dance. Third overall went to Dumitru & Cristina Turcan and they took the second away from Khariton & Anastasia. 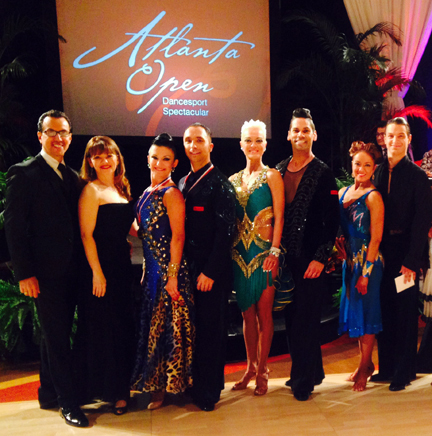 he Rising Star Rhythm was also a walk in the park for Shandor Shtefil & Alessandra who won all dances with the majority of firsts.  However, for us it was not as clear as the Ballroom.  We though that runners up Eddie Rivera & Meghan McNash could have taken a few dances specially the C,R,Sw. When you look on paper Shandor & Alessandra were the clear winners in the Mambo with perfect scores not one single second place awarded and the bolero were they only got one third place mark, and that was form Melanie LaPatin. Third overall was Jonathan Green & Rachel Neilson.

The smallest heat was the professional Latin and here the clear winners for us but not for the judges were Felipe Gonzalez & Darinka Divijak who won three dances to two 1,2,2,1,1. Overall we found Felipe & Da 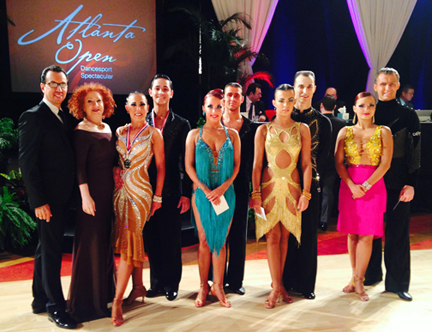 rinka to be not only correct in their field but quite unique and interesting.  However, we were also quite surprised when the announced the runners up as Aleksei Alekseev & Ekaterina Derevleva who won the samba and rumba and placed second in the other three dances. We say surprised because for us they could have been third, but like Mr. Sodano says, this proves that the skating system works.  Judges mark where they see it and in the end the system works it out. Third were Kahryton & Anastasia Khomenko. 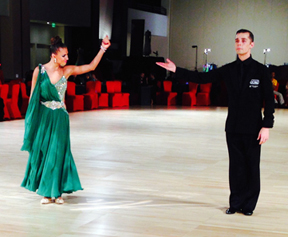 us the Smooth was the best competition of the night and here we had a seven couple final from a very healthy semifinal. This competition went clearly to Adrian & Hannah Dydynski and they won all dances. Second was awarded to Mykyta Serdyuk & Anna Krasnoshapka 2,2,3,2 and third went to Christopher German & Mila Popovich 3,3,2,3.

This was a perfect ending to a terrific day of competition at the Atlanta Open.