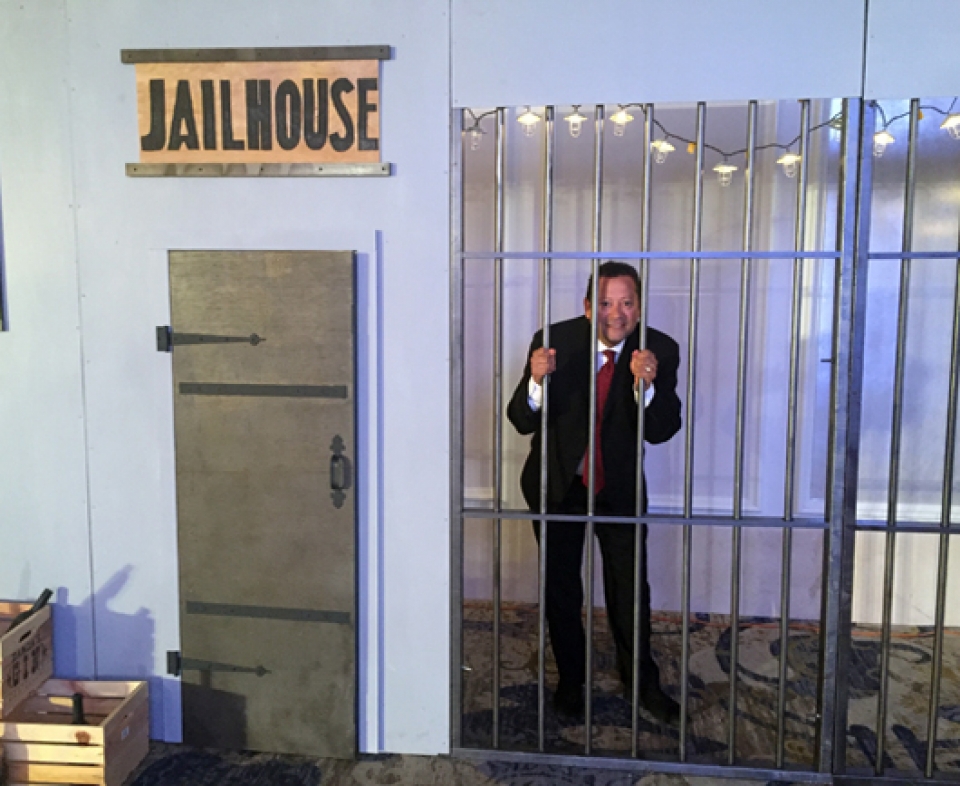 Right Under Our Noses!

For everyone who knows the Philadelphia Dancesport Championships organizer Mr. Chuck Danza, one thing is for sure, “he sure know how to party.”

Although many of you might not know Mr. Danza, he enjoys a good party even though he does not drink (he doesn’t want to gain a pound to his already sculptured physique). However, last night he threw a bob-bojage party (after party) that will be imprinted on our minds as possibly the best after party for 2016! There was lots of preparation and goings on for this excellent feature of his event, but nobody would have suspected what this party might be, even though the preparations were going on “right under our noses.”

View the embedded image gallery online at:
https://dancebeat.com/m-blogs-en/item/1169-philfestival2016#sigProId190b4689a4
As you will see in the decorations for the Philadelphia Dancesport, the last night was ‘20’s night, all the ladies came with flappers dresses and gentleman wore their gangster hats, it was a nice touch but no one would have expected such an excellent finale to this last evening of competition and dance. When the competitions were over and everyone was awarded right in the Ballroom we went through the decorations into this Latin nightclub with a 12-piece band, where food a dance floor and drinks flowed like there was no tomorrow. Mr. Barrera of Dance Beat has not put his foot on a dance floor to social dance in possibly years, but on this night the music and the ambiance was so contagious that he danced until 2AM causing him to aggravate his already hurt foot. All officials and competitors danced until the morning came, that included judges like Ms. Avalos, who nearly close the night with Mr. Barrera.

When speaking to Mr.Danza about this incredible surprise, he said, “I wanted it to be like when we competed at the USBC many years ago and everyone just danced til the sun came up.” If this is what Mr.Danza wanted, well, “mission accomplished” we have never had so much fun and danced as we all did last night, but not at a competition level it was all as when it all started over 100 years ago and it was with “social dancing.”

Perhaps this could be a lesson for the young competitors of today to learn, yes the steps are more complex, the sportsmanship more intense, but it must still have the essence of a man and a woman dancing socially, that was the main ingredient for ballroom dancing, when you take this element out you are left with “nothing” but an exercise that no one wants to do! On the same night Vibeka Toft was talking to Mr. Barrera right after a dance and here are two judges while watching a young man cut up and dance on the social floor, almost instantly their heads turned and Mr. Barrera commented, “had that young man danced as he is doing now in the competition just an hour before, he not only would have made the final but possibly placed quite high.” Ms. Toft agreed.

View the embedded image gallery online at:
https://dancebeat.com/m-blogs-en/item/1169-philfestival2016#sigProId65df469762
Well this party was fabulous but we cannot forget the rest of the night. We were treated to a 20-piece band for all the competitions, it took just a few trimmings as none of us are used to band music, but once that was in place the band and the dancers were all in one place. Co-chair of judges, Mr. Rogers, as you can see was on hand assisting and like in the picture at times conducting as well.
View the embedded image gallery online at:
https://dancebeat.com/m-blogs-en/item/1169-philfestival2016#sigProIdd3d388f04b
The Professional Latin was possibly the largest of all the events and here a seven couple final was called. Artur Tarnavskyy & Anastasia Danilova were the overall winners by placing first in three dances C,S,J, second went to possibly our favorite of the night, Aleksandr Skarlato & Loreta Kriksciukaityte who won the R,P and placed second in the vha, and third in the other two dances. For us Artur & Anastasia lack the element we were talking about just a minute a go, the social aspect between a man and a woman, this element is a bit more prominent in Aleksandr & Loreta but only a bit more. When we saw these two dance side by side we can see why although Artur & Anastasia are very progressive dancers something that I truly like, they still can’t seem to capture our hearts and we believe it is due to the absence of this very important ingredient, “partnership.” For us without this element of life between a man and a woman, there really cannot be a true Latin dance. This is the glue and what separates us from the “gym” and turns our dancing into an art form and not a “sport.” (for more on our take on this subject read our future article entitled, “To Touch or Not to Touch”).

View the embedded image gallery online at:
https://dancebeat.com/m-blogs-en/item/1169-philfestival2016#sigProId6253b3a21d
The Professional Smooth was also terrific with great quality dancers. Here Mazen Hamza & Izabella placed first in all four dances. Travis & Jaimee Tuft were second in all dances, and Andrei & Elena Rudenco took third 4,3,3,3. Michael Choi & Erin Marie were fourth 3,4,4,4, Enzo Zappia & Stephanie Betts were fifth 6,5,5,6, Dave Hannigan & Maggie Toth were sixth 5,6,6,5 and seventh in all dances was awarded to Ilya Abdullin & Tara Barakov.
View the embedded image gallery online at:
https://dancebeat.com/m-blogs-en/item/1169-philfestival2016#sigProId4fec23575c
Four excellent couples entered the cabaret and it was a choice between an acrobatic performance or a lyric performance. On this night the acrobatic routine won Mykhailo Azarov & Tetyana Makarenko took the night, second was awarded to Clyde Harris & Summer Elkin. Third went to Jamie Black & Robin Ray and fourth were Tim Polaschek & Katherine Hutchinson.
View the embedded image gallery online at:
https://dancebeat.com/m-blogs-en/item/1169-philfestival2016#sigProIdf275c4ad89
The Professional Ballroom was also very interesting, they were the first to experience the band so for a couple of dances in the semifinal, it must have been difficult for both the band and the couples, but as we said it all worked out in the end. Andrew Begunov & Anna Demidova took all dances, Igor Mikushov & Ekaterina Romashkina were second 2,3,2,2,3, and Gianni Calandro & Arianna Esposito were third 3,2,3,3,2. Radu Sterban & Xenia Cletova were fourth in all dances, Anatolii Repliuk & Ruslana Mamaysur were fifth 5,5,5,6,6, and sixth went to Mechyslav Pavlyak & Gemma Arnold 6,6,6,5,5.
View the embedded image gallery online at:
https://dancebeat.com/m-blogs-en/item/1169-philfestival2016#sigProId53fed2d59a
The American Rhythm overall for us was the most, and I would use the word “lame,” because compared to the other three events it lacked energy and excitement. The winners as in the Rising Star were Ilya Andullin & Tara Barakov, second was awarded to Jean Michel & Larisa who placed second in all dances and third was Joe Hasson & Natalie Hankone. It basically mirrored the Rising Star with the exception of Jean Michel & Larisa. Had this been a Rising Star event it would have been good but it was open and compared to all the other events it was a little “sad.”
View the embedded image gallery online at:
https://dancebeat.com/m-blogs-en/item/1169-philfestival2016#sigProIdf6185f6ef2
The Amateur Latin was almost as exciting or better than some of the professional heats, it was quite big and had lots of energy. This event was run in the earlier part of the evening so it was a great first starter to this evening schedule. Alexandr Nabiullin & Valeriya Ryabove won overall but not all dances 1,2,1,1,2, Yevgenni Orlov & Maryna Yerina placed second 2,1,2,2,1, Bumchin Tegshjargal & Michelle Klets were third 3,3,3,3,4, Mitchell Itkin & Natasha Stevchenko were fourth 4,4,4,4,3, Fifth went to Enrique Sanchez Garcia & Anastasia Shvets 5,5,5,5,5, sixth were Justin Schaffer & Natalia Zvereva 6,6T,6,6,6, and seventh went to Mathew Tsai & Jaonne Liu 7,6T,7,7,7.

With this the 2016 Philladelphia Dancesport Championships came to a close. Congratulations to Mr. Chuck Danza for putting on a terrific event!

Last night it was a complete Philadelphia welcome night with “Latin” band and all the stars rising around it!

View the embedded image gallery online at:
https://dancebeat.com/m-blogs-en/item/1169-philfestival2016#sigProId334c139070
The Latin band played during the sit down dinner in the ballroom and many of the attendees, including the officials, could not sit through this contagious band’s music and it’s rhythmical repertoire. This night also hosted all the professional RS competitions and so it was a full evening of entertainment for all the attendees. I think our Dance Beat crew would have done better if they stayed out of “jail,” by the way Mr. Danza love your subtle Philly touch in decorations!

The Rising Star Latin was excellent and here Nikita Mlakhov & Nadezda Vlasova took four out of the five dances and were crowned the winners overall 1,1,1,1,2. Second overall was awarded to Riccardo Pacini & Sonia Spadani and they took first in the Jive and second in the other four dances. Third was awarded to Francesco Arietta & Rosaria Vivone with the scores of 3,4,3,3,3. Fourth got a little more tricky as you will see with the marks, the judges were not too clear how to mark Felipe Edmiston & Darinka Divljak 4,3,5,5,4. Fifth was Vesko Matakov & Andrea Mariscal 6,6,4,4,5, sixth went to Valdimir Velev & Lily Kolman 7,5,6,6,6, and by seventh place the judges had already sorted themselves Artur Shvetsov & Carolina Avila placed fifth in the jive and seventh in the other four dances.

View the embedded image gallery online at:
https://dancebeat.com/m-blogs-en/item/1169-philfestival2016#sigProIdd8efe9f8c9
The Rising Star Smooth was also a fun event and here Andrei & Elena Rudenco took every dance. Dave Hannigan & Maggie Toth placed second and Ilya Abdullin & Tara Barakov were third, by tying for third in the waltz with Enzo Zappia & Stephanie Betts and placing 6th in the tango, third in foxtrot and fourth in the VW, now that is what we call variety in marks. Enzo & Stephanie tied with the couple just mentioned in the waltz, placed 3rd in the tango, fourth in the foxtrot and sixth in the VW, giving an overall 4th place position. Leo Mora & Christina Garced were fifth 6,5,5,3, Aaron Talbert & Angela Maughan were sixth 5,4,6,5, and seventh in all dances went to Mykhailo Azarov & Tetyana Makarenko.

In the Rising Star Rhythm we also had strong competition. Here Ilya Abdullin & Tara Barakov placed first in four dances and second in the mambo. Second overall was awarded to Alberto Cortez & Jessa Mae Briones 2,2,2,2,1, and third was awarded to Joe Hasson & Natalie Hankones and they took third in all dances. Fourth were Mykhailo Azarov & Tetyana Makarenko 4,4,4,6,4, fifth went to Tim Polaschek & Katherine Hutchinson 6,6,5,4,5, leaving sixth to Primo Garcia & Fayvin Doucette 5,5,6,5,6, as you can see from the marks, although Primo & Fayvin got 3 fifths it was the 4th that brought Tim & Katheirne ahead of them.

View the embedded image gallery online at:
https://dancebeat.com/m-blogs-en/item/1169-philfestival2016#sigProId3b6c573809
The Ballroom was a 7 couple final and here Radu Stebard & Xenia Cletova won all dances. Second was awarded to Anatoli Repliuk & Ruslana Mamaysur and they took all seconds, third went to Serhiy Averkov & Olena Barna but here was a little different 3,3,3,5,3. Fourth went to Lukas Chockuba & Angelena Oh 5,4,4,3,5, Dmitriy Solomankha & Gabriela Sevillano were fifth 4,5,5,4,4, Manuel Trillo & Anna Belyavtseva were sixth in all dances and seventh was awarded to Nenad Pavlovic & Anastasia Barhatova.

Tonight we have all Open events, a band will be playing for the competitions, so it should be a memorable evening.