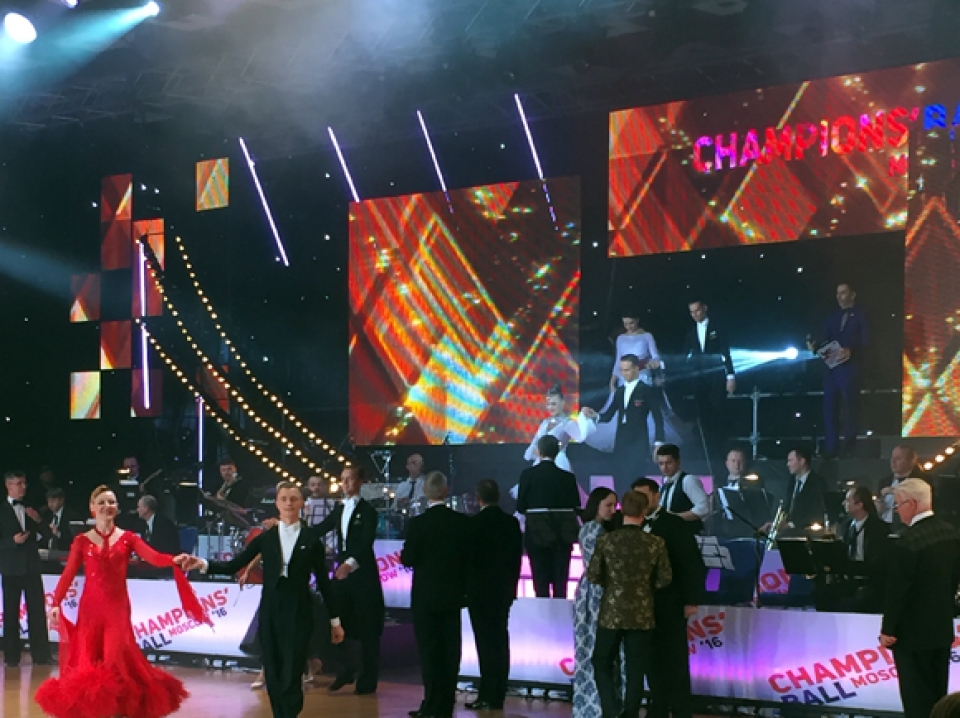 Nearly every year we have been quite fortunate to be able to attend the Champions Ball in Moscow, Russia. This competition is the biggest pro-am event outside the United States with over 6 thousand entries.

View the embedded image gallery online at:
https://dancebeat.com/m-blogs-en/item/1176-championsball2016#sigProIde4eea00c17
This year was a special year, we witnessed the planting of the Rhythm seed in their system. For the first time ever Rhythm events were added and although it was small we had Rhythm in Russia.
View the embedded image gallery online at:
https://dancebeat.com/m-blogs-en/item/1176-championsball2016#sigProId65f77cf3b7
There were two pro-am ladies who showcased this style with great grace and excellent skill - Priyanka Mathew and Tanuja Tharani, both ladies dance and take lessons in the USA. The competition took place in a smaller ballroom along with the Argentine Tango heats but it was done with great sophistication and style as you see in the pictures. The ballroom, or small theater, was decorated beautifully in the style of the Champions Ball and there was plenty of interest in the room. When they first did the Smooth style at this same event a number of years back, I remember it was also small, but I suppose it’s just a matter of time before it catches on and the Rhythm fever will be as big or bigger than the Smooth events that are already in progress. This year the organizers made it easier for all English speaking attendees to understand and follow the competition by supplying an automatic translator for the guests to wear in their ear, as you can see from the picture Mr. Barrera & Mr. Jacobson were both wearing their own.
View the embedded image gallery online at:
https://dancebeat.com/m-blogs-en/item/1176-championsball2016#sigProId9a6ba7f3aa
The Champions Ball is a two-day competition and both evenings are filled with great pro-am dancing. The Open Pro-am Ballroom or “A” division is featured the first night and this as usual started with a very strong first round but in the end only seven Ladies made these outstanding final. Elena Gluhovkaya w/Daniil Ulanov from Moscow, Russia who placed seventh, Ekaterina Gorohova w/Pavel Ehjdinov from Moscow, Russia who were sixth, Anna Nestenova & Ivan Novikov from Moscow, Russia who placed fifth, Erika Vitkunaite w/Vytautas Viluckis from Vilnus Lithuania who placed fourth and in a shocking result for the fans as well as ourselves Nadezhda Solzhenicyna w/ Paolo Bosco from Italy who placed third, we are not sure that Nadezhada should have won because the lady at times had a few issues with her upper body position, and keeping up with this phenomenal Ballroom dancer (Paolo was an incredible Ballroom dancer and one that made his mark in this industry for time to come), but we feel that this lady’s skill could have easily been placed second and first in at least four of the dances.

The Pro-Am Open “A” Ballroom event was fantastic but the B&C were also excellent and the winners deserve a mention. In the “B” category the winners were Erika Vitkunaite with teacher Vytautas Viluckis from Vilnus, Lithuania, second was Anna Nesterova w/Ivan Novikov, Russia, and third was awarded to Ekaterina Gorohova w/Pavel Ehjdinov, Russia. In the “C” division the prize went to Marina Kal’chenko w/Konstantin Yacenko from Russia, second was Tat’tyana Markova w/Il’ya Kucenko and third was Irina Blinnikova w/Vyacheslav Korovin from Russia.

View the embedded image gallery online at:
https://dancebeat.com/m-blogs-en/item/1176-championsball2016#sigProId61b722f5ea
The second night the feature event was the Pro-Am Open Latin and here the winners were Svetlana Muhametshina w/Aleksandr Chesnokov from Russia, this lady has won for a number of years and her work is very clean but striking allowing her to maintain her position. Second overall went to Elena Okulova w/Artem Gorelov from Russia, and third was Marina Dzasohova & Ivan Stacenko from Russia, Marina is also a very strong dancer who has competed for a number of years and who could have easily placed second in our eyes. Marina did a showcase number the same night and her dancing continues to improve with time and the choice of music, choreography and costume were exquisite.

We must point out that in the American Smooth “C” Pro-Am an American took the trophy home, Robyn Murcar w/Andrea Stein (Clap) from Edmonton, Canada. Second was Tat’yana Alekperova w/Aleksej Eliseeev from Moscow, Russia.

View the embedded image gallery online at:
https://dancebeat.com/m-blogs-en/item/1176-championsball2016#sigProId1cbc8e4d25
There were two amateur events that also were part of the evening festivities, the Latin took place the first night and all couples were of great standing, the only problem is there was little difference between them. With the exception of the winners who won every dance, Rusland Hisamutdinov & Elena Rabinovich from Moscow Russia, the rest could have been placed anywhere. Anton Lam-Viri & Anastasiya Savinskaya from Moscow took second, and Dmitrii Sem’Yoshkim & Karina Zadoyan were third. The Ballroom was in our opinion not as strong as the Latin and here too anyone really could have won depending when you were looking at them. The winners overall were Fedor Isaev & Anna Zudilina from Moscow, Russia, second was Georgij Markaryan & Anna Trenzeleva from Moscow, and third went to Filipp Borisenok & Ekaterina Bondareva also from Moscow.
View the embedded image gallery online at:
https://dancebeat.com/m-blogs-en/item/1176-championsball2016#sigProIdc0dd484cfa
Moscow is an incredible place full of mystery and history. The Americas delegation from USA and Canada held their own at the competition but the best part for us all was the trip around the city going inside the Kremlin, visiting the beautiful churches and cathedrals, Red Square, the Bolshoi Ballet, and most importantly for us Americans, eating fantastic food. Some of the restaurants were fabulous in quality and in service and beauty. The last restaurant was what we would say country style and although it was quite formal there is an actual ranch next to where you were eating. Take a look at the pictures of some of the animals. The food was great and Vodka flowed.
View the embedded image gallery online at:
https://dancebeat.com/m-blogs-en/item/1176-championsball2016#sigProIde64d2d2ce4
There was incredible entertainment provided by WDC World Ballroom Champions, Arunas Bizokas & Katusha Demidova plus Eldar Dzhafarov & Anna Sazina
View the embedded image gallery online at:
https://dancebeat.com/m-blogs-en/item/1176-championsball2016#sigProId2c1dae3ca4
We want to say thank you to Mr. Alexey Mindel for giving us this opportunity to explore also to Daria who took care of our every need as well as Mihkail Sporykin who was always on top of everything to make sure it all happened without a glitch. Overall it was a fantastic 2016 Champions Ball!!