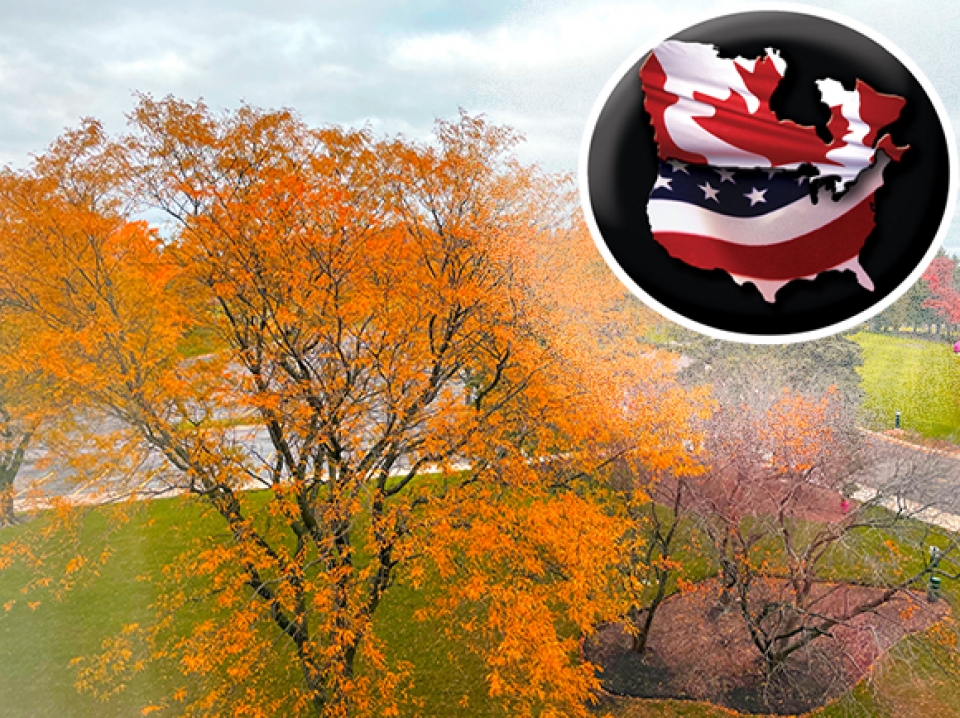 Last night was an amazing night for Ballroom dancing here at the North American Imperial Star Ball, with some of the best professional and amateur US Ballroom couples in the country competing to become North American stars.

There was also an extraordinary Professional Rhythm event, that was a nail-biter for all.

View the embedded image gallery online at:
https://dancebeat.com/m-blogs-en/item/1989-northamerican21?tmpl=component&print=1#sigProIdb3153d67ea
The Professional Ballroom started with a quarter-final round and this had to have been difficult for the judges, the event was filled with talent from the beginning with little room to cut. Six couples in the end were called for the final round and even here there was little wiggle room for the judges. First in all dances went to Andrii Mykhailov & Ekaterina Popova who for us gave a stellar performance, but it was not an easy task. Andres & Veronika End, who placed second overall, were right on their heals, particularly in the waltz where they were behind by a hair, same in the tango where they lost one mark and the viennese waltz where they lost by 2 marks. Once they got to the foxtrot and quickstep Andrii & Ekaterina were able to make some distance by winning the dances and leaving Andres & Veronika holding third place in those two dances.

For us it was clearer as water Ekaterina was the perfect partner for Andrii, resembeling the steadyness of the Iconic lady from the past Loraine Barry. Andrii maneuvred himself around the ballroom with tremendous ease and perhaps without hardly any weight in his arms. Ekaterina seems to be one of the few ladies who can extend her upper body position without leaning back, making her look easy and pliable.

View the embedded image gallery online at:
https://dancebeat.com/m-blogs-en/item/1989-northamerican21?tmpl=component&print=1#sigProId7a53c6054d
Andres & Veronika End have some excellent moves but this was not their night, maybe they required a bit more room for their moving but to us they seemed not as easy as Ekaterina & Andrii. And it seemed to get worse in the last two dances where they placed third, allowing Xenia Cletova & Radu Sterban to get ahead of them in these two dances by placing second in the two. For us Radu & Xenia, who were third overall, have the perfect vehicle to arrive at the top but just might need a little more soul searching to reach us fans and to make us dance with them. At times it can look a little mechanical and not from the heart. Radu & Xenia placed 3,3,3,2,2.

Fourth in all dances went to Sergey Averkov & Olena Barna, who seemed to be having some problems in the final round of competition. At one point they ran out of the floor and we thought there might be an injury or something, but then they came back and continued with the final, then during their presentation following the foxtrot she seemed to be tending to her neck? I wonder if Olena was dancing with a slightly injured neck, this is not a good thing if this is the case she should take some time to heal her injury and not reinjure all over again.

Fifth in this beautiful Ballroom competition went to Valeriia Belozerova & Igor Mikushov who took fifth in all dances. This is another excellent partnership but for us still a little green to challenge the top. In Sixth place were Oreste Alitto & Zhenia Casanave, this was the perfect place for this couple although they are quite talented their look and their movement at the moment is more perspiration than inspiration, even their upper position can look a little crowded at times, excellent talent but needs quite a lot of work to challenge for the top.

View the embedded image gallery online at:
https://dancebeat.com/m-blogs-en/item/1989-northamerican21?tmpl=component&print=1#sigProId9079e73306
The Professional Rhythm was also a very interesting heat. Here Andre & Natalie Paramonov had what we thought to be an easy win. We were quite surprised to see that even though they won every dance with a majority of firsts, they did not have perfect marks on their column as we expected. In fact some of the judges mark them down to fourth and third place.
View the embedded image gallery online at:
https://dancebeat.com/m-blogs-en/item/1989-northamerican21?tmpl=component&print=1#sigProIde30c198519
The excitement for us was the hard-fought second place between Francesco Arietta & Jesse Mae Briones and Dmitry & Olena Nikishkin, who seemed to be neck and neck fighting for that position. Dmitry & Olena with their powerhouse take no enemies performance and Farncesco & Jesse with their very artistic approach. Unfortunately for Francesco & Jesse who ended up third overall, the judges were not fully convinced. They did place second in their bolero where we could hear some audience exhale at some of their very creative and sexy moves. Francesco & Jesse also managed to take a few seconds from Dmitri & Olena but it was an uphill battle to unseat Dmitry & Olena’s powerhouse machine that continues to hold them strongly to their second place stance.

View the embedded image gallery online at:
https://dancebeat.com/m-blogs-en/item/1989-northamerican21?tmpl=component&print=1#sigProId9146a1245b
The Amateur Ballroom was terrific. Olena Ablitsova & Oleksandr Kalenyuk took first in all dances and I have to say that even though it was perhaps not the best performance I have seen from this couple, they were still unbeatable with great quality of work. Second went to another couple that is really holding our attention and could at some point rival Olena & Oleksandr and this was Samule Hacke & Katerina Hermanova who placed second in all dances. This couple have really improved of late and are totally understanding the importance of posture and feet in this style.

View the embedded image gallery online at:
https://dancebeat.com/m-blogs-en/item/1989-northamerican21?tmpl=component&print=1#sigProId1ca2232975
We should also mention the great quality opening event of the night and this was the U/21 Latin, a great final. It was won by the talented 10-dance team of Nickolas Bleykhman & Alissa Joly who placed first in all dances.

Sunday is dedicated to the kids and has some very talented mostly mid-western junior and preteen couples contesting the divisions.

No Time to Stop!

The North American Imperial Star Ball, is on its way and from beginning to end there have been some exciting rounds of dancing, so much so that few want to leave the ballroom.

View the embedded image gallery online at:
https://dancebeat.com/m-blogs-en/item/1989-northamerican21?tmpl=component&print=1#sigProId7b4d7cf20f
The most interesting for us and the audience was the Professional Latin where three very talented couples were fighting for top placement, Anastasiya Danilova & Artur Tarnavskyy, Amanda & Andrey Besyedin and Anna Pelypenko & Valentin Voronov from Canada. The overall winners on the books were Artur & Anstasiya, but in looking into the marks they did not win a single dance with perfect scores, in all the dances they lost one or two first place marks to their competitors. Canada’s Anna & Valentin took the majority of those place marks that were missing from their score card with the exception on the rumba where Amanda & Andre were awarded one first place mark. We just want to point out that although Artur & Anastasiya lost those first place marks they still managed to win all dances with a majority of firsts.
View the embedded image gallery online at:
https://dancebeat.com/m-blogs-en/item/1989-northamerican21?tmpl=component&print=1#sigProIdab6ac5eb8c
Although Artur & Anastasiya took the majority of firsts and won fair and square in every dance, we do not feel they had the best performance, we thought they left plenty of room for couples to steal more than the 8 first places they lost. The couple that for us was totally on and could have possibly taken a few more firsts was Amanda & Andrey. We have never saw them dance with such terrific confidence, possibly overshadowing the dynamic duo of Anna & Valentin from Canada, who also gave an excellent performance but lacked the power to deliver on this evening. When their scorecards came back it had notably quite a number of thirds to even a couple of fifth place marks in their jive. We quite love the subtlety of Anna & Valentin but on this floor and with this lighting they needed to take a page from Jennifer Lopez and “Make It Loud” for these judges to see. This loudness was palpable in all of Amanda & Andrey’s performances and they had you always looking back at them. In the end the Judges ruled and Amanda & Andrey placed second with these marks 2,3,3,2,2, leaving Anna & Valentin holding third 3,2,2,3,3. Anna & Valentin’s fans went ballistic when the placements where announced and it was as if a herd of “cows” walked into the ballroom, many of the audiences were “booingggggg” the judges’ decision, even as the pictures were being taken for the lineup. I think that perhaps to quote a well know Latin Icon, Shirly Ballas, Anna & Valentin not only needed to show their beautiful skill and sometimes soft interpretations but contrast it with a “Knock the doors down” style when it all needed to be noticed.

There was so little room to look at anyone else but here was the rest of this excellent Latin final result: Vlad Kvartin & Anna Lisova placed fourth 4,4,4,4,4; Julia Mitina & Aleksei Shipilov were fifth 5,5,5,5,5 and Dmitrii Chopenko & Valeria Khrapak took sixth in all dances.

View the embedded image gallery online at:
https://dancebeat.com/m-blogs-en/item/1989-northamerican21?tmpl=component&print=1#sigProId3460d32eb8
The Open Professional Smooth was also a terrific competition and here we saw the skill and fine performance of our newly crowned US Champions, Galina Detkina & Roman Malkhasyan who unlike Artur & Anastasiya, won all dances with perfect scores from the judges. We must say that it was lovely to watch on this. Second was awarded to Travis & Jaime Tuft who were as usual perfect until their last breath, no mistakes allowed in this dynamic partnership. They took two dances with perfect second position scores but faltered a little in their foxtrot where they were awarded 3 third place marks, and in the Viennese Waltz where they also got 2 third place marks. For us on the sidelines there was no other choice for second place but apparently they must have left a few holes in their performance for some of the judges.
View the embedded image gallery online at:
https://dancebeat.com/m-blogs-en/item/1989-northamerican21?tmpl=component&print=1#sigProId8b2bdc2c84
Alexandra Smirnova & Aleksander Vukosavljevic were the recipients of all the second places that Travis & Jaime lost, and we must point out that this is a couple that keeps getting better and better with every outing and who could in the near future challenge strongly for that position or even more if they keep their work up.

Anastasiya & Kharyton Khomenko took fourth with these marks 4,4,5,4; Arina Sokolova & Dimitrii Zavialov placed fifth overall 6,5,4,5. Sixth place was awarded to Brianna & Vladyslav Nalyvaychuk 5,6,6,6, and taking all seventh places were Michael Choi & Viktoriya Kleyman. This most have been a very difficult heat for the judges not only they had 7 brilliant couples with a few different styles but they had to look at every couple within the minute thirty allowed.

Travis & Jaimee won the Professional Cabaret early in the evening and

View the embedded image gallery online at:
https://dancebeat.com/m-blogs-en/item/1989-northamerican21?tmpl=component&print=1#sigProId9a64827d06
took the U/21 Ballroom

I want to Congratulate Katusha Demidova for organizing such a terrific competition considering her partner in crime, Arunas Bizokas, is not present. Fantastic job so far and we look forward to tonight, the final evening session of the North American Imperial Star Ball where the Open Professional Rhythm and Open Professional Ballroom will take place! Keep logging into Dancebeat.com for the latest and our take on this terrific event.