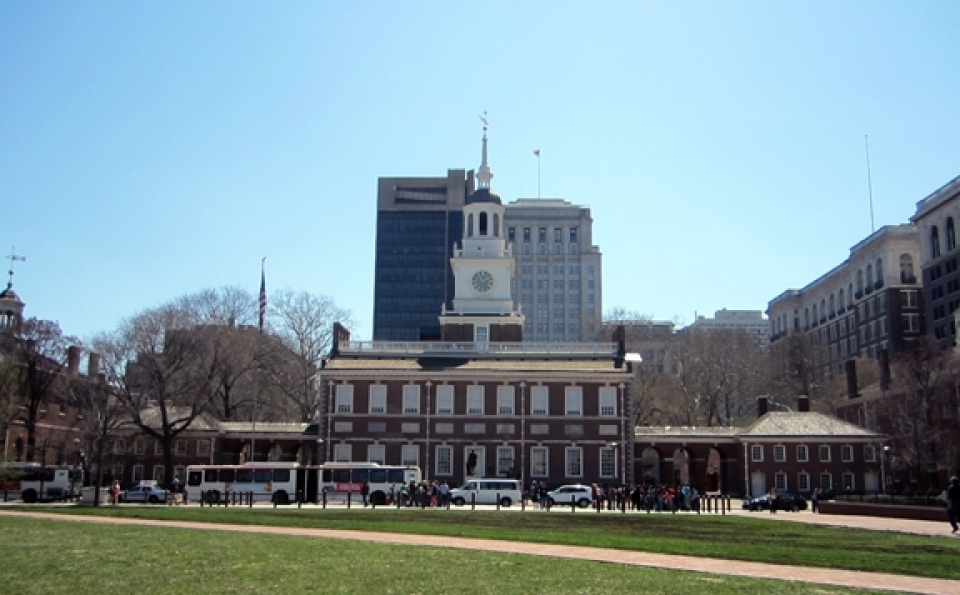 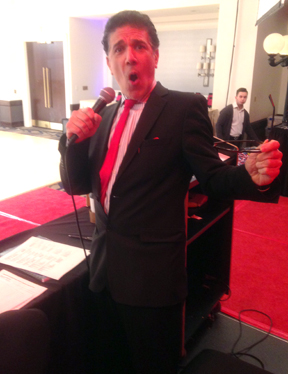 Philadelphia Dancesport Championships has outdone itself this year in spreading the “Brotherly Love,” something of which William Penn, founder of the city, would have been proud. Corky Ballas, at the direction of Mr. Chuck Danza, organizer, managed to maintain an energy-filled room throughout the entire weekend. His unstoppable energy and charisma kept the room in stiches, clapping or cheering through the entire weekend. Anyone that knows any history of Philadelphia knows that William Penn had a dislike for what he called the “Horrors of European Urban Lifestyle” and Mr. Ballas brought a casual atmosphere that can only be found in USA.

"I don't want life to imitate art. I want to be art." Last night in the beautifully and tastefully decorated ballroom in the Sheraton Philadelphia Society Hill, the 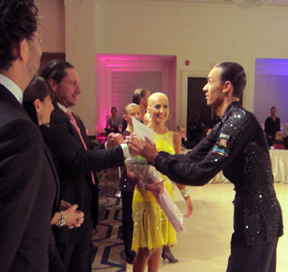 competition was excellent with very interesting happenings.  The first and possibly the best competition for us was the Professional Latin that started with a semifinal. The final of this excellent event was difficult to judge. Our favorite and the judges’ favorite at the end was Ivan Mulyavka & Loreta Kriksciukaityte from FL who took first in all dances with the majority of firsts in every dance. From there, it was an uphill battle for most of the judges trying to make up their mind which couple was their next favorite. The couple that got the most seconds or better marks was Dmitry Nikishkin & Olena Shvets who placed second overall (2,3,3,2,2).  Here we were not as kind as the other judges. To us, with the exception of tremendous speed and power, this couple brought very little substance to the table and we will explain in the future article. Third was awarded to Genya Bartashevich & Yana Maznikova (3,2,2,3,3).  For us this couple was possibly the least consistent of all couples.  There were some incredible moments but just as you thought they would put you there, they got cold and pulled away from, as Mr. Corky would say, “The Love.” 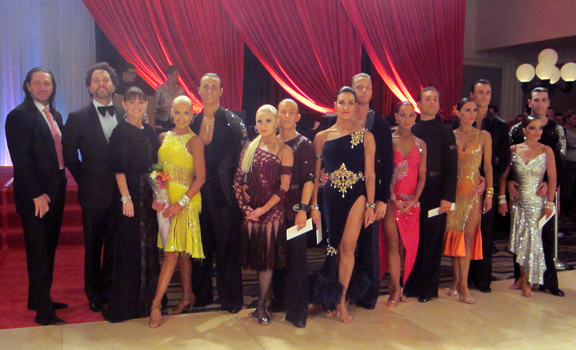 Our favorite couple in this exciting Latin final placed sixth and that was Hayk Balasanyan & Emilia Poghosyan (5,5,6,6,6).  For us they had a little bit of every thing - speed, consistency and most important a very unique approach to the style, we will explain also in the coming event. Fourth in this final went to the new partnership of Roman Italyankin & Alexandra Bokova (4,4,4,4,4), fifth was awarded to Jean Paul & Lana Rossi (6,6,5,5,5).

"Dance isn't something that can be explained with words. It has to be danced." 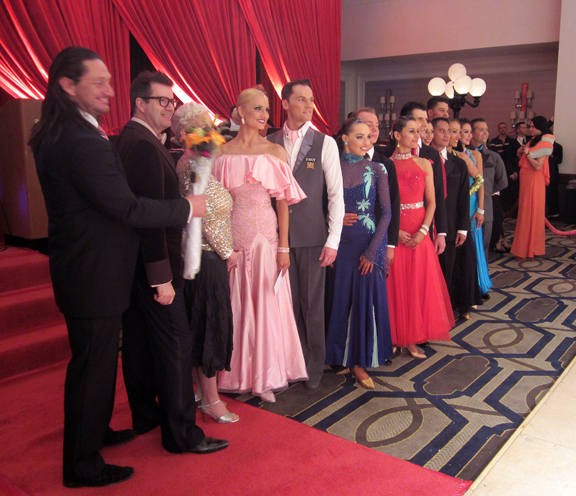 The love was spread quite thick on Travis & Jaimee Tuft who were by far the best couple in the Professional Smooth final.  Travis & Jaimee got perfect scores from all judges in every dance and won the Smooth competition easily. Travis & Jaimee continue to receive their love and cash when it came to the Showdance competition where they placed first overall with majority of firsts.  However, here we personally held some of the love back.  We felt that Jungie Zamora & Sheena Damir presented a routine with a level of difficulty that was much greater than that of Travis & Jaimee. But we were in the minority, the judges awarded Jungie & Sheena 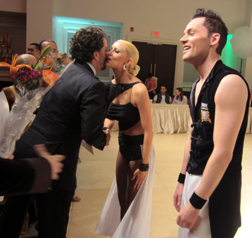 second and Jaimee & Travis first.  And in a super whammy of “Love” the judges also awarded first and second places to Travis & Jaimee in the Challenge of Champions at the conclusion of all the events. In this Challenge of Champions Ivan & Loretta the Latin Champions earlier mentioned took third. Continuing on the Professional Smooth, second place went to Matthias Kruschel & Christina Schlegel and third in all dances was awarded to Roman Manolachi & Elena Rabinovici. We were a little surprised on Leo Mora & Christina Garced who placed fifth overall.  We felt they have improved tremendously and were hoping to see at least in a few dances, higher placements for this couple.

"Technical perfection is insufficient. It is an orpha without the true soul of a dancer." 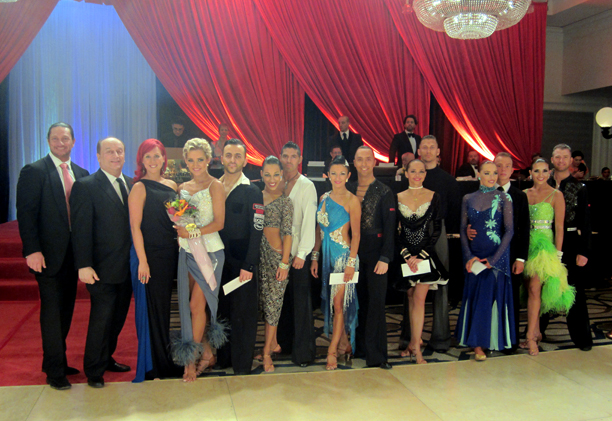 The Professional Rhythm is also an event worth the mention. Here Vard Margaryan & Sofya Fil won every dance with the majority of first in every dance, but our favorite in this heat was Matthew Hauer & Lauren Schelfhaudt who continue to make progress with what we consider to be a great element of this style and that is some authentic Latin soul. Third wen to Standor Shtefil & Aleksandra Barsukov, fourth was awarded to Srahija Lackovic & Irina Fedsova (4,5,5,4,4), fifth went to Matthias Kruschel & Christina Schlegel (5,4,4,5,5) and finally sixth in every dance was awarded to Tim Polaschek & Katherine Hutchinson. 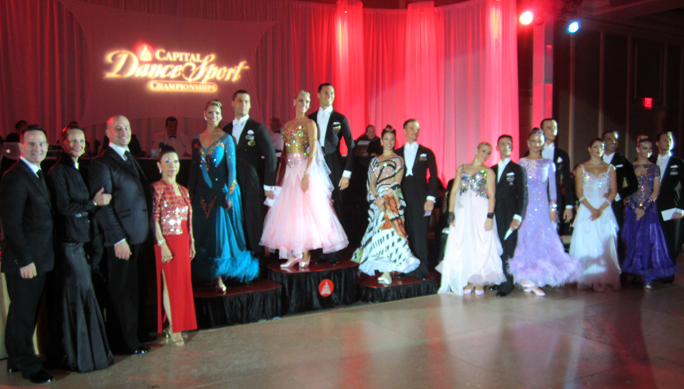 A lot of love was spread for the Professional Ballroom but the couples had, in our opinion, a hard time spreading themselves on this narrow floor.  We saw more confusion and bumpy work than in a open field. Here the judges’ favorites were Andrey Begunov & Anna Demidova who won all dances with a huge majority of first. We had a hard time seeing what the other judges saw.  Frankly, if we saw them make one good run it was rare, they were part of that bump and grind I just talked about. For us the better performances came from Emanuele & Francesca Pappacena who placed second in every dance and Oscar Pedrinelli & Lenka Xovalcikova who took third overall.

"I'm dancing to the music of the madness inside me."

In a footnote** We were floored in the Professional Latin when a couple went to a VIP guest, comfortable on their front row table and asked if they could take their drink after the paso! At first I was shocked, the unsuspecting audience member had no choice but to oblige.  Then I saw the couple not drink anything but go to the side spill it on the floor and rub their shoe soles in the carpet! Couples!!! If you find the need to put @#%^ on the soles of your feet to stay balanced, the least you can do is put it where you can get to it! I found it very rude of the performers to take the VIP guest’s drink to use it for dabbing your feet so you can stay balanced in your Jive!