Check out the videos by Supershag - here 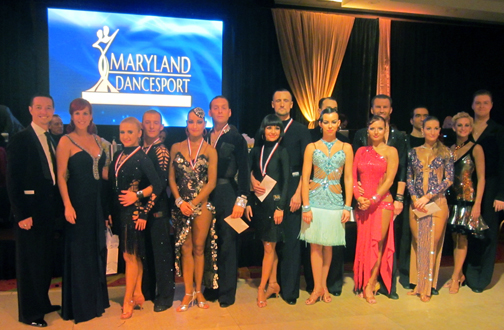 e most interesting professional event for us was the Professional Latin where we had what we consider a very thought provoking result. Going from past performances we expected as usual the favorite to win. For us this favorite was Roman Italyamkin & Alexandra Bokova.  However, this was not the case this time they took second in all dances but the paso doble where they placed first. The overall winners of this championship were Dmitry Nikishkin & Olena Shvets who won all dances but the paso where they placed second.

You would have thought from what I just mentioned that the competition would have been close, however, it was not.  D 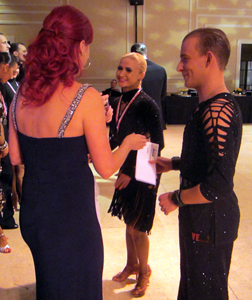 mitry & Olena won all four dances with a full majority of firsts from the 13 judges present, the only dance where it was a bit closer was in paso. We do have to point out that in our opinion this couple looked quite sharp and very prepared. Let’s say we were not surprised by their win. Roman & Alexandra did a wonderful job as well and in our opinion could have won easily but needed to put a little more distance between them and the wining couple by producing a more creative performance. Dmitry & Olena were way ahead of them when it came to speed and power, so what Roman & Alexandra needed here to maintain their position was to focus on the creative aspect of the dances and the woman/man relationship that both these two couples sometimes lack.

The rest of the final was also excellent third went to Dmytro & Nina Kovalenko, fourth was awarded to Kharyton & Anastasiya Khomenko 5,4,4,4,4, fifth went to Vlad Astafiev & Jenya Didenko 4,5,5,5,5, sixth was Zsolt Katona & Timea Potys and they took sixth in all dances and all sevenths were awarded to Denis & Amanda Satonin. 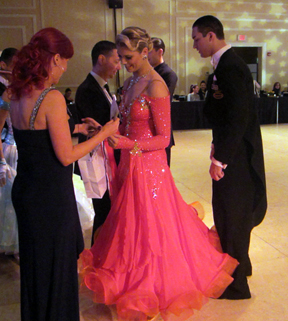 Professional Ballroom was also great.  Here we had three couples really fighting for first place but in the end of this excellent final only one could take the prize home and that was Andrei Begunov & Anna Demidova.  At first we were a little concerned for this couple since the last performances we have witnessed left us wanting more, but we must say that on this outing they took the “bull by its horns” and made tamed him. Andrei & Anna were moving, dancing and telling us “we are the best.”  Andrei was very musical and Anna followed and responded to his every move and call, our congratulations to this very talented couple who won all dances with a huge majority of firsts from the judges. Second went to another excellent couple, Oscar Pedrinelli & Lenka Kovalcikova who took second in four dances and third in the tango. 2nd in tango went to Gianni Caliandro & Arianna Esposito and we totally have to agree with this, their tango was very musical and sharp. We were not surprised that they even took a few firsts from Andrei & Anna. 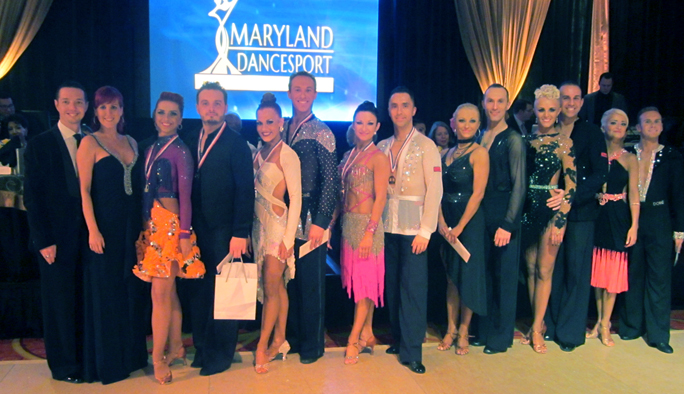 The Professional Rhythm also had a great entry and here Azamat Evgamukov & Katerina Angelone took the lead by winning three dances and placing second in the rumba and bolero. We have to say that at first we were not sure where this competition was going to end up, the other couples too looked great in the semifinal round, however, for us in the final especially after the swing was danced, Azamat & Katerina were in a league of their own. Second was awarded to Shane & Shannon Jensen and they were the winners of the rumba and swing.  They had a very clean performance but needed the heartfelt performance that Azamat & Katerina gave us today in order to win. Third in every dance was Shandor Shtefil & Aleksandra Barsukov, this couple in our eyes has made a great strides in this style and we are happy they are being rewarded.

Fourth were Andrei Svirydzenka & Yuliya Zubava and they took fourth in every dance. We found their performance very clean as well and we were a little taken aback, since we were almost certain they might take a place higher, this goes to show all that just giving a squeaky clean performance is not enough. Fifth in every dance were Stephen Smyth & Viktoriya Kleyman, and finally in sixth place were Tamas Kordos & Mariya-Kristina Shurupova. 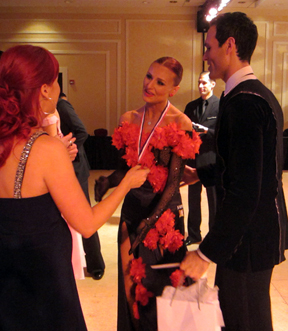 Professional Smooth also was terrific and here it was an easy road for Mazen Hamza & Izabella Jundzill who won all dances with a majority of firsts in all. Travis & Jaimee Tuft placed second overall and the new partnership of Michael Choi & Erin Marie placed third in all dances. We must mention how impressed we were with this new duo, who did not look new at all.  It looked as if they have been working for quite sometime, I wonder what it will be like a year from now?

Fourth overall went to Kirill Gorjatsev & Daria Zotova 4,4,4,5, here we were not to clear at some point you look at them and you think they would be in the top two the next moment everything would fall apart. Simple things like posture and holding form. Stephen Smyth & Viktoriya Kelyman placed fifth overall 5,6,5,4, Sergey Smolin & Anna Tomasini were sixth 6,5,6,6, and seventh went to Shandor Shtefil & Alexandra Barsukov and they took seventh in every dance. We most conclude this category by saying that the standard and quality of this style was very high, in the semifinal round there were at least two couples that could have easily made the final and they did not. 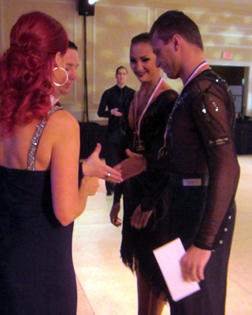 The show concluded on a high note with a quick but excellent show choreographed by Diana McDonald.  Some of the champions presented some of their numbers and a few of the couples from the Northeast filled in with the group numbers.

The high definition screen in the ballroom was magnificent and very appealing to the audience’s eye.  Congratulations Amanda & Ilya for a terrific Maryland Dancesport, 2015. 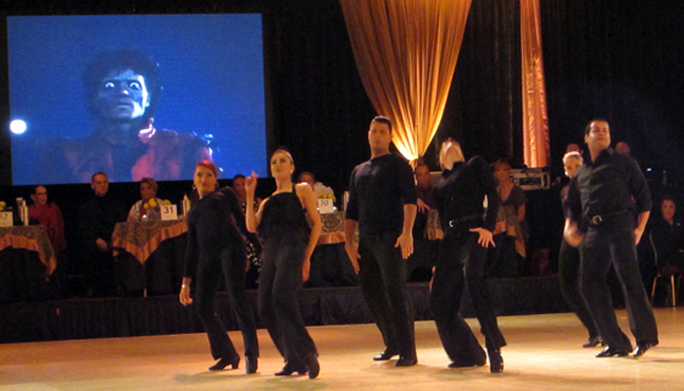 Last night the Rising Star competitions were fabulous here at the Maryland Dancesport Championships, all finals were full and the quality of the dancers was quite high. 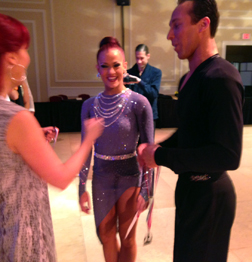 vening began with the Professional Showdance and so before we talk about the Rising Stars we’d like to mention this excellent event. 5 couples took to the floor to do their solo and with no surprise Shane & Shannon Jensen took the top prize, quite easily from where we stood. Shane & Shannon looked totally ready and their new number of “I Who Have Nothing” and it went down with perfection. Second in line was Brandon Baker & Chelsea Cherie.  We felt that the level of difficulty was tremendous but they lacked clarity in the execution. We felt that they looked quite strained at times and in one of the nail biting maneuvers they even lost their footing getting a clear wobble in their program. However, the judges must have missed this or were totally taken by the difficulty of the choreography they placed second comfortably with only 3 judges placing them lower than third place. 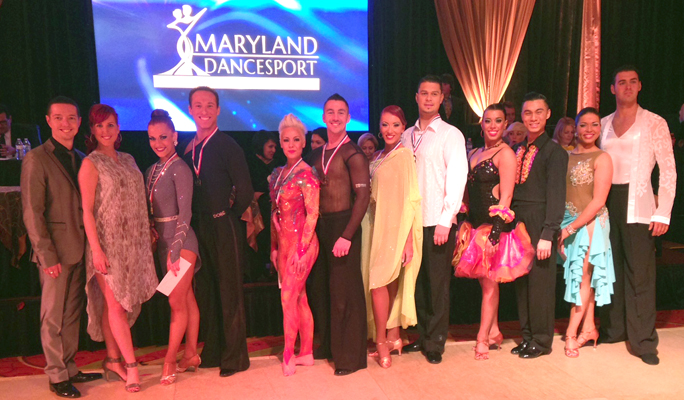 We were quite taken by the 2 other Showdances that should also be mentioned. Leo Mora & Christina Garced did an interesting “smooth” style routine, and who placed third overall. The other routine we most mention before going into the rising Star events was that of Jonathan Chen & Nadine Messenger who did an energetic mambo. 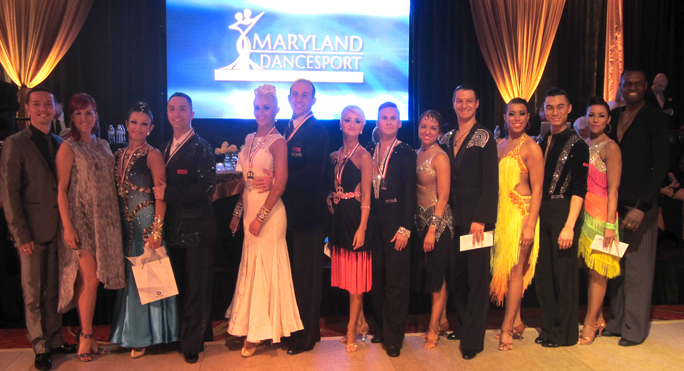 The largest entry was in the Rising Star Rhythm where a full semifinal was run. Shandor Shtefil & Aleksandra Barsukov won every dance with at least half the panel marking in their favorite.  They did manage to take some low scores, their worst marks came from Paul Holmes who awarded them three 4ths and two 3rds. Stephen Smyth & Viktoriya Kleyman placed second overall but their marks varied from second to fourth place and even a fifth form a number of judges, their worst marks were in the mambo, 3 judges awarded them fifth in this dance.

For us the Rhythm was a little divided with some couples doing what we thought to be Rhythm style and others just some kind of Latin. Tamas Kardos & Mariya-Kristina Shurupova placed third overall and here the Latin training for us was very present, they had excellent skill but could use some old fashioned Rhythm skills to be complete. Fourth overall also went to another very talented couple but they too for us had perhaps a little too much Latin influence, and they placed fourth in four dances and fifth in the rumba.

In our opinion fifth and sixth had more Rhythm ingredients in their dancing, however, perhaps their work is still a little green to place higher.  Jonathan Chen & Nadine Messenger placed fifth 6,6,5,5,4, and Edson Jeune & Nina Guezo took sixth 5,4,6,6,6. 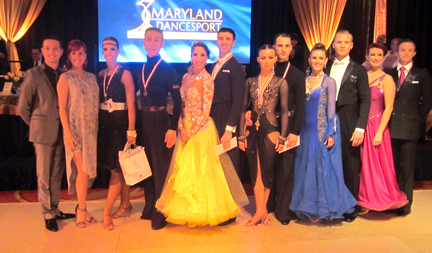 he Professional Rising Star Ballroom was perhaps the smallest heat overall with only five couples entered and here and the clear winner to all was Jang & Adele Don winning all five dances, the VW with a perfect score. In a couple of the other dances they had a few judges awarding them a few seconds, and we can see that although they 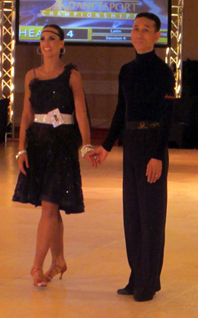 too were our favorite, sometimes their power and over the top style made them a little wobbly. Second overall wen to Dmitriy & Gabriela Solomakha and they took second in every dance, for us this couple had a very soft casual style but overall did not have enough power to support their well held top lines. Third were Kharyton & Anastasia Khomenko 3,4,3,3,3, fourth was Sergey Izyumov & Ellen Porter and fifth were Corey & Kayla Girard. 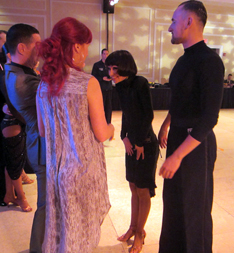 e Rising Star Latin had a full six-couple final and here Dymtro & Nina Kovalenko took first in all dances, we felt that all the top four couples were very close in skill but we are not surprised with their win. Kharyton & Anastasia Khomenko placed second overall and they too were quite excellent but when you looked at the marks any of these couples could have shared any of the top placements 2,2,3,3,3. Third was awarded to Jang & Adele Don and they too had a variety of marks but in the end here were their overall marks 3,3,4,4,4. We quite liked Vlad Astafiev & Jenya Didenko, in fact we would not have been surprised had they placed higher or taken a dance or two, however, at the end of the day they took fourth overall 3,3,4,4,4. Fifth were Zsolt Katona & Timea Potys fifth in all dances and sixth was Denis Satonin & Amanda Satonin. 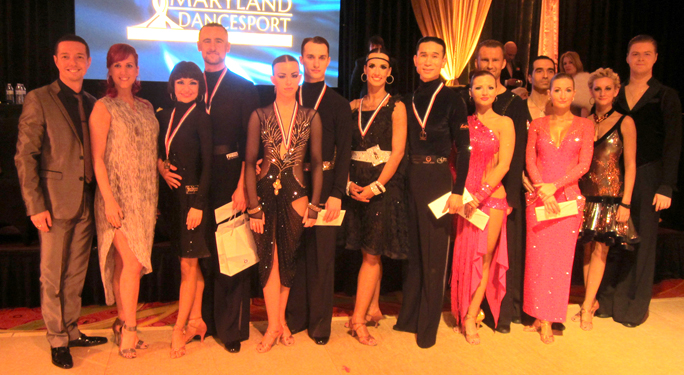 As I said all Rising Star events were great here last night and the Professional Smooth was no different. 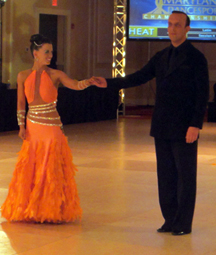 Here Sergey Smolin & Anna Tomasini were the overall winners taking all four dances. We were surprised to see that they got quite a potpourri of marks all the way down to sixth place.  For us they could have been second but never less. Second went to Stephen Smyth & Victoriya Kleyman and they took second in every dance. Third in every dance went to Shandor Shtefil & Aleksandra Barsukov, again they too shared in all the marks from sixth to first place but we were quite surprised they placed so high in this style, especially in the waltz where close to the beginning the lady fell to the ground and as we all follow their performance, from our perspective could not recuperate but they even got a couple firsts.

Fourth overall was awarded to Aaron Talbert & Angela Maughan 4,4,4,5, this couple had the most energy of all and could definitely move, however more attention should be paid to detail in order to place higher. Fifth overall was awarded to Leo Mora & Christina Garced 6,5,5,4, we were quite surprised that this couple placed so low, we could see that they could at times look a little heavy on their feet but, their shapes and transitions are in many ways better than some of the couples on top of this list. Sixth were Christopher & Jenny Sochnacki 5,6,6,6. 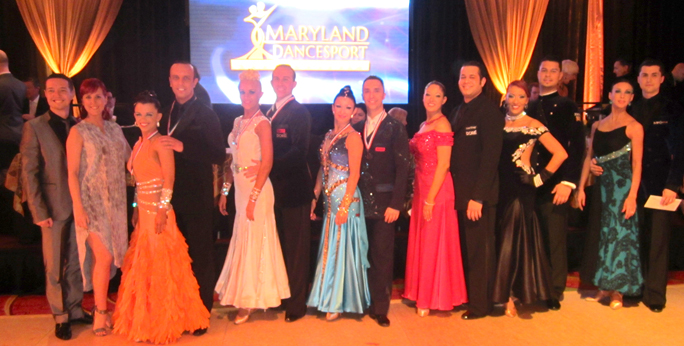 Tonight are the open events and it promises to be a terrific evening judging from the Risings Stars last night.