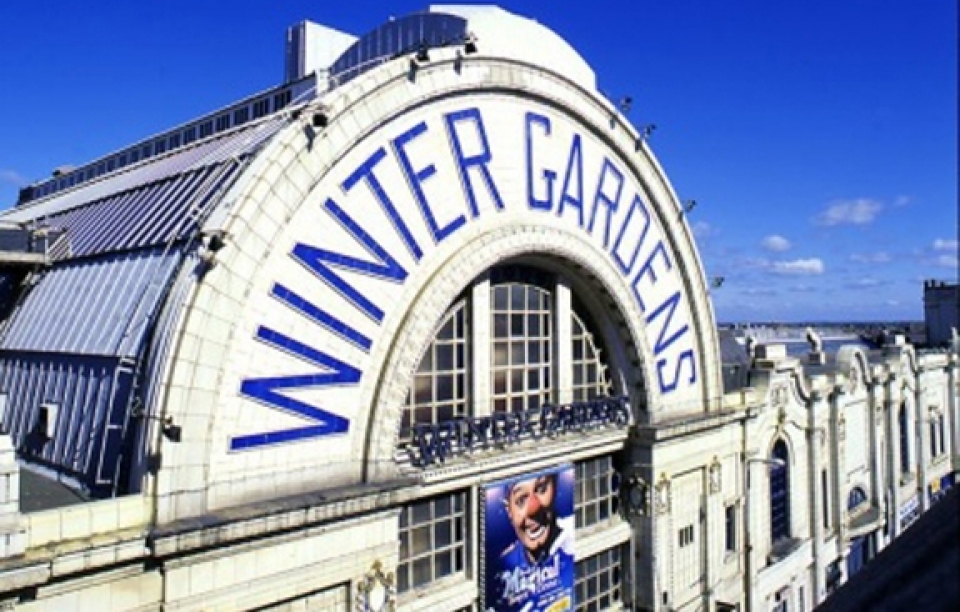 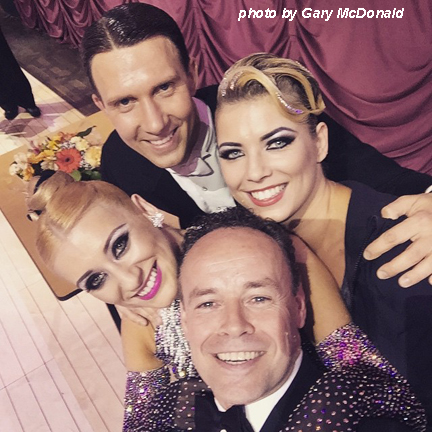 s in the past few years, USA ended on a high note taking the top 2 places in the British Open Professional Ballroom.  Arunas Bizokas & Katusha Demidova won all 4 dance (no VW at Blackpool) and Victor Fung & Anastasia Muravyeva were 2nd in all 4.

One interesting sidenote, while Arunas & Katusha received mostly 1st places, one judge did not see it quite the same as the others.  Joanne Bolton-Hawkins placed them (1W, 4F, 5T, 5T).  This was Arunas & Katusha's 6th consecutive win here in Blackpool.

USA also had many other success stories in this division.  Marat Gimayev & Alina Basyuk were placed in the semifinal in all 4 dances.

A night of "Smoothness" e big story for the USA last night (Thursday) at Blackpool was the introduction of the American Smooth style to the Blackpool crowd.

5 US professional Smooth couples were invited to show their stuff on the famous floor of the Empress Ballroom - prime time on Thursday (the couples' expenses were sponsored by AMI, FADS, NDCA & ABC).  The 5 couples perfomed all together to recorded music.  The audience seemed very appreciative.  Congratulations to Peter & Alexandra Perzhu, Mikhail & Galina Zharinov, Mazen Hamza & Izabella Jundzill, Travis & Jaimee Tuft and Kyle & Allie Spinder.  What's next for Smooth dancing in Blackpool?

The main event of Thursday at Blackpool is the Amateur Ballroom.  The title was open because last year's champions have turned professional, but the championship stayed with Poland who still dominate this event right now.  Sergiu Rusu & Dorota Maar are the new chmpions and 1 of 3 Polish couples in the final.

The best finishes for North America came came from Andres & Veronika End and James Cuttler & Virginie Primeau.  Both couples made the quarter-final. 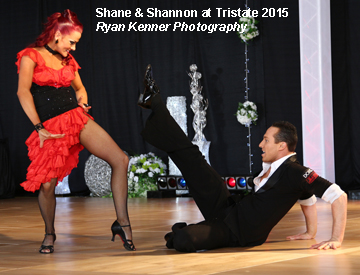 Watch for a report on this division by James Peters in Dance Beat soon. 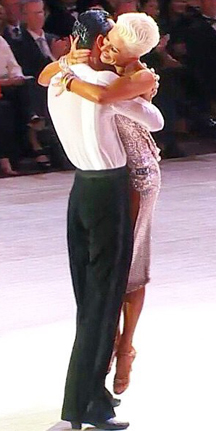 Half the final quits!

Last night during the Open British Professional Latin Championship, 3 couples from the final 6 announced their retirement.  Reigning champions, Michael Malitowski & Joanna Leunis won their 8th consecutive Blackpool and then announced they were calling it quits.  Also hanging up their shoes are the 2 couples from Slovenia, Andrej Skufca & Melinda and Jurij & Jagoda Batagelj who were 5th and 6th respectively. 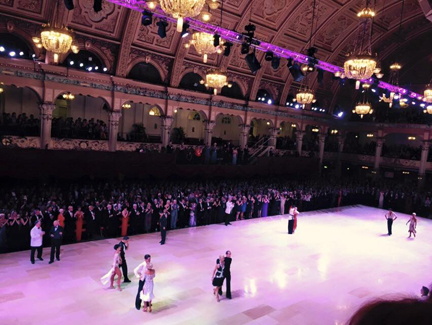 d now the interesting part!  The remaining 3 couples, not quitting, are all from North America.  Riccardo Cocchi & Yulia Zagoruychenko were 2nd overall, but won the cha cha.  Stefano DiFilippo & Dasha Chesnokova were 4th overall.  Then from Canada, Maurizio Vescovo & Andra Vaidilaite were 3rd.

Watch for Hanna Karttunen's report on this division in Dance Beat soon. 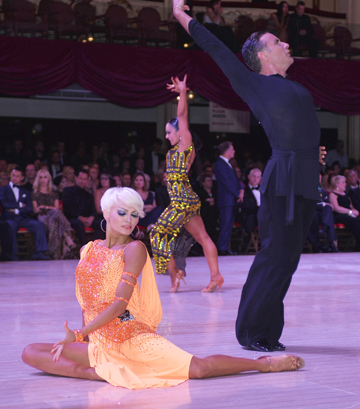 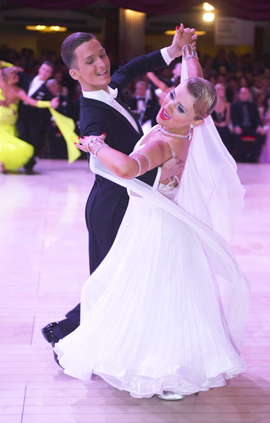 Watch out for a full report on this division by Vibeke Toft in Dance Beat soon. 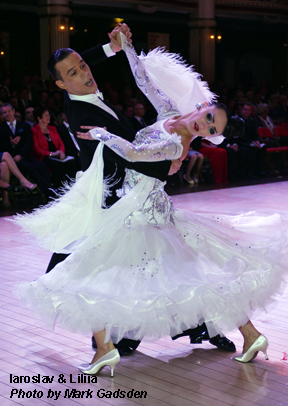 USA has 2 in Pro RS Ballroom

USA had two couples in the final of the Professional Rising Star last night in the Winter Gardens, Blackpool.  Congratulations to Iaroslav Bieliel & Liliia Gladiuk who were 2nd and Oscar Pedrinelli & Lenka Kovalcikova who were 5th.

We have a good depth in this division.  Placing in the semifinal were Gianni Caliandro & Arianna Esposito and Igor Mikushov & Ekaterina Romashkina. The other featured event of Saturday night at Blackpool is the Under 21 Latin and this year Austin Josen & Nino Dzneladze of USA placed 2nd.  Right behind them were Another strong finish for the USA was a semifinal place for Vlad Kvartin & Anna Maria Prokopovicova. t wrapping up today (Sunday) are the Amateur Rising Star divisions.  In the Ballroom the best finish for the USA came from Nicholas & Rochelle Kharlamov who made the semifinal round.  But Canada scored in the final with a 3rd place from James Cuttler & Virginie Primeau. 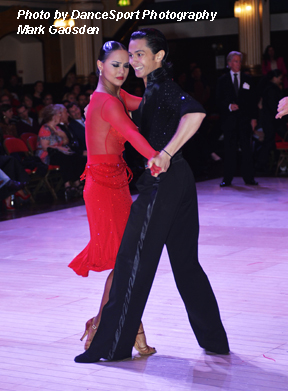 n a reversal of the form form the previous day, Austin & Nino were the winners of the Amateur Rising Star Latin in Blackpool, defeating the couple who won the youth the day before.  So what a year for this young couple!

Adam & Morgan placed in the semifinal as did Daniils Kutuzovs & Maria Shalarova, also from Canada.  One other Canadian couple, Nurlan Galymov & Celeste Bailey made the quarter-final. 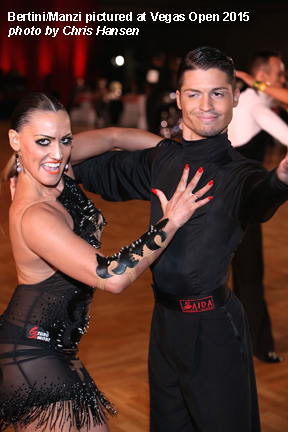 The remaining coverage was, we believe, accurate.

o in the final for the USA were Roman Italyankin & Aleksandra Bokova who placed 6th.  Canada was also represented in the final as Jean Philippe Milot & Laurence Bolduc placed 3rd.  Adding to the confusion, in their first competition as professionals, Francesco Bertini & Sabrina Manzi, who live and work in the USA, but were apparently representing Italy, placed 2nd - probably the best personal result of the night. 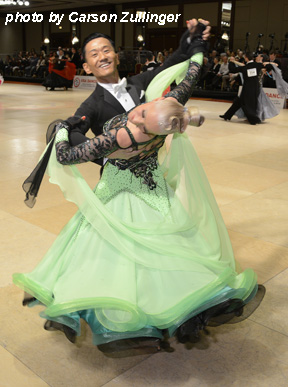 he other event of the first full night of comeptition in Blackpool in the Senior Ballroom.  The top US finish tonight was from Xingmin & Katerina Lu who placed 5th.  Next highest were Turtle Brennen & Regina Pareigis who made the quarter-final.