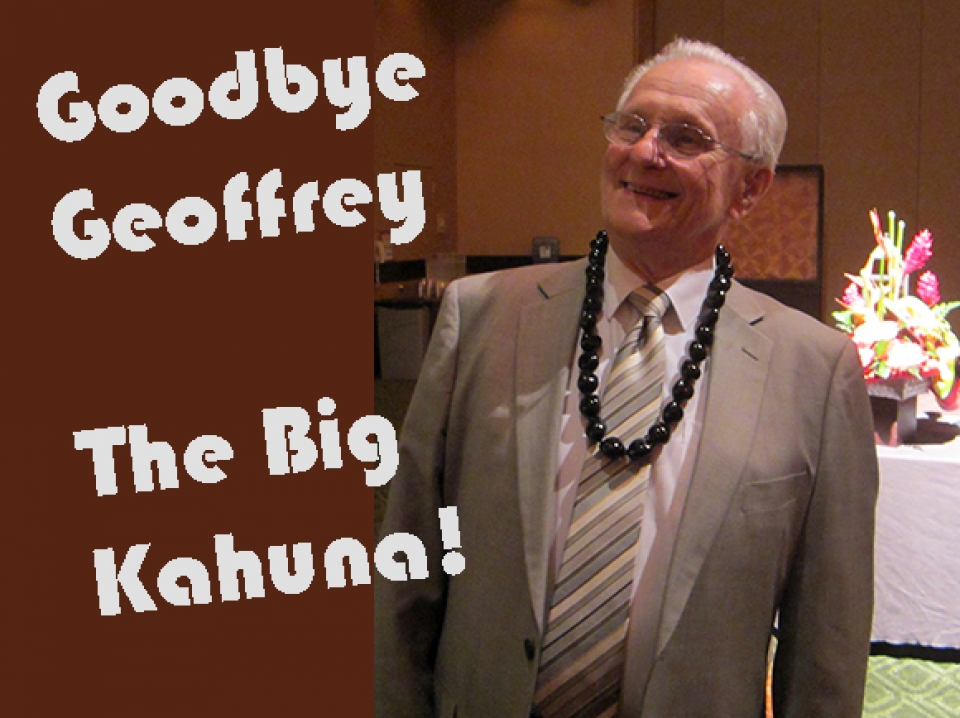 I have known Geoffrey almost as long as I have been in the USA (since 1979) as he also emigrated from England but more than a decade before me, in 1967. Originally from the Northeast of England, Geoffrey later taught at the North 20 Dance Studio in London before his big move to the USA.

View the embedded image gallery online at:
https://dancebeat.com/m-db-articles-en/item/1893-geoffrey#sigProIdf67174a1cb
In 1968 he opened a dance studio in Washington DC called Danceland II in partnership with Al Franz and Ronnie Bennet. Geoffrey was a Dual Fellow of the ISTD and the Chairman of the East Coast Committee of the USISTD for 12 years. He was also appointed the first ever Ballroom Director of the NCDTO (now the NDCA) where he helped write the first competition rule book. Geoffrey was very proud that his NDCA registration number was #1, a number he kept until he retired from adjudicating in 2015. Incidentally his final work as judge was at the Caribbean Dancesport Classic of that year.
View the embedded image gallery online at:
https://dancebeat.com/m-db-articles-en/item/1893-geoffrey#sigProId79d382e1f2
But it is probably as the irascible Chairman of Judges at so many of the USA’s largest and most prestigious competitions that most people know and remember Geoffrey, including 28 years as the Chairman of the Ohio Star Ball. He was a stickler for the rules and many times I heard him tell worrisome competition organizers to “get off my stage!” Geoffrey liked to run competitions his way and it was bad luck to any official, adjudicator or even organizer who tried to tell him otherwise. But we all ended up as friends in the end.
View the embedded image gallery online at:
https://dancebeat.com/m-db-articles-en/item/1893-geoffrey#sigProIdfade80f464
In 1992 he created the Hawaii Star Ball an event he continued to organize until 2015 when he passed it to David Alvarez & John Fishpaw. It has been my pleasure to attend the Hawaii Star Ball every year since 1994. Geoffrey made it a truly special event for all who attended, competitors and officials alike. It was truly a unique event in paradise and I thank Geoffrey so much for the invitations every year.

Geoffrey certainly had a severe and prickly side, but for those of us who were lucky enough to know him personally, he had a wicked sense of humor and was always up for a good time. He even attended the famous White Party in Miami with us one year.

Perhaps some of my favorite memories with Geoffrey come from Blackpool. He would rent a small flat on Albert Street, right across the street from the back door of the Winter Gardens. We spent many happy hours in his “parlor” sipping tea, or something stronger and watching the comings and goings from that back door.

View the embedded image gallery online at:
https://dancebeat.com/m-db-articles-en/item/1893-geoffrey#sigProId1224e63866
Geoffrey was a fiercely loyal friend, although never afraid to tell you if he thought you were doing something wrong. I will miss his advice and strength for ever. I will be forever sorry that due to the current travel conditions I could not go to Hawaii to say goodbye in person. I send my deepest condolences to his husband, David Matumoto and his sister and brother in law, Pamela & Peter Eggelton.

Goodbye my great friend, I will miss you forever. I hope you are organizing the next competition wherever you may be with all those who have gone before you!