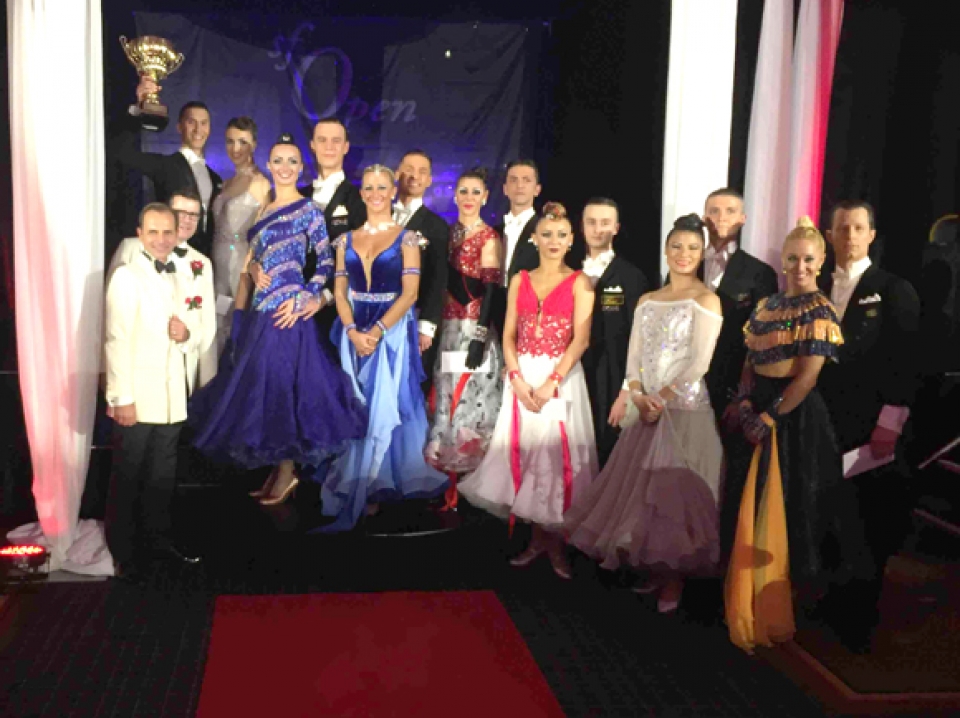 Great Night at the Ball!

It was a great night at the San Francisco Ball! The four featured competitions were totally worth the fly in!

We were a little surprised by the attendance since unlike the night before it was not standing room only, but it was a warm, feeling crowd that cheered the couples as they all competed in their perspective categories.

View the embedded image gallery online at:
http://dancebeat.com/m-blogs-en/item/1162-sfo2016#sigProId332af094a7
The Professional Latin was excellent with some terrific couples down to the semifinal round, some whom did not make the final. Even to the end, the first place position was still being disputed. Justinas Duknauskas & Anna Kovalova won, but just by a dance. They placed first in the C,S,P, but took second in the R,J. Andrey Tarasov & Yulia Kuznetsova took the R,J, but were not able to take one more to win the night. For us the excitement came in the newer couples, there was few people in the audience that did not think that Mykhailo Bilopuktov & Anastasiia Shchypilina should not have placed higher even though they placed third 3,4,3,3,3, and the same went for Francesco Bertini & Sabrina Manzi 4,3,4,4,4 who were fourth, these two couples exceled and were terrific to watch. We thought it was a terrific showing for Roman Italyankin & Alexandra Bokova, who placed fifth overall, and who seem to be stepping up their game by being a little more creative with their work. Andrey Voloshko & Katerina Kyrylenco were sixth 6,6,6,6,5.
View the embedded image gallery online at:
http://dancebeat.com/m-blogs-en/item/1162-sfo2016#sigProId4867b0571e
The Professional Smooth was also as thrilling. In the end it was duel between the talent and sophistication of Nick Cheremukhim & Viktorija and the artistry of Max Sinitsa & Tatiana Seliverstova. On the first dance it almost looked like Nick & Viktorija could hold back the attack, they won the waltz, but once the tango got going the judges could not help themselves and the rest of the dances were awarded to Max & Tatiana 2,1,1,1. We have to say that Max & Tatiana’s work has a way of drawing you into their unexpected and unpredictable work, and judging from last night’s performance we are not sure now, we think the US Title might still be up for grabs. It was also a fantastic night for Evgeny Malko & Anna Shahbazyan who placed third overall and who we think could have even placed a little higher in some dances.

View the embedded image gallery online at:
http://dancebeat.com/m-blogs-en/item/1162-sfo2016#sigProIdd57d3c6935
The Adult Amateur Ballroom went easily to Mikhail Vorobiev & Sonya Tsekanovsky who placed first in every dance. When the results were read Mikhail & Sonya seemed to be surprised by the result. We presume they figured the couple from Ireland would take it all and yes they were excellent but for us a long way from getting very close. It was good to see the consistency and steadiness of performance by Mikhail & Sonya who proved to us they were the Champions to be, even when their heads told them no! Sean Smullen & Aimie Leak from Ireland placed second in every dance and did give a terrific performance, just not good enough to take the trophy home. Third was awarded to Dmitriy Vorobiev & Sofie Elliott 4,3,3,3,3, Fourth went to Scott Nicholson & Evgeniya Gorobets 3,4,4,4,5, fifth were Christian Solares & Whitney Myers 5,5,5,5,4, and last but not least in sixth place were John Huang & Angela He.
View the embedded image gallery online at:
http://dancebeat.com/m-blogs-en/item/1162-sfo2016#sigProId6bb3d56b33
The Under 21 Championships Latin Scholarship was also a fun event to watch and here Guilio Ferrante & Lidia Martinez Espinosa 1,1,1,1,1, were the winners. Second was awarded to Mathew Tsai & Joanne Tin-Chung 2,2,2,2,2, and this was awarded to Scott Nicholson & Evganyia Gorobets 3,3,3,3,3.

I have to say that this was perhaps one of the best San Francisco Opens I have ever attended. The attention to the participants as well as the attendees was of the maximum quality and some of their new ideas added were great choices. The live music for the professional and amateur events was a great touch and most of the selections, especially with the female vocalist were inspiring for the dancers. A quick shout out to the newest addition to the “runners” – Mark Andre and Eric Caceres. If they look familiar, their mother is judge, Chantal Leclerc.

Congratulations Stephan & Denise and to the new owner Colin James!

It has been a few years since I (Didio Barrera) last attended the San Francisco Open, and I must say, I’m totally impressed.

The SFO has always been a favorite competition of ours, it’s close enough to the big city with its majestic topography, and fantastic attractions, boating, theater, museums and hundreds of other cultural event including dance competitions. However, this year with a new partner Mr. Collin James in hand, iseems to have come a wave of new improvement and additions to the competition.

The stage, the focal point of the event has been reshaped and decorated with terrific draping from where the talent can be presented during the evening competitions. There is a VIP lounge where I’m sure people on packages and other visitors can grab refreshments while being entertained and the lighting all around the ballroom and on the floor gives it an atmosphere of class and distinction.

View the embedded image gallery online at:
http://dancebeat.com/m-blogs-en/item/1162-sfo2016#sigProId668a9946f2
All this is great improvement but the “Meat and Potatoes” is on the floor. Last night the Professional Ballroom winners were non other than Victor Fung & Anastasia Muravyeva who are currently the number two couple in the world of professional Ballroom dancing. They as expected won every dance and the audience where thrilled to have them. Second overall went to Iaroslav Bieliei & Liliia Gladiuk and they too took second in every dance and from where we stood we must agree. Third in this excellent heat was awarded to Igor Colac & Roxane Milotti, who also looked quite excellent but apparently in only four dances, in the VW the judges awarded them a 5th place overall.

Fourth in this competition and we are sure slightly disappointed with their results were Emanuel Pappacena & Francesca Lazzari, but they took the third place in the VW away from Igor and Roxane. Emanuel & Francesca’s scores where 4,4,3,5,4. Fifth was awarded to Cristian Radvan & Kristina Kudelko 6,5,4,4,5, sixth were Michael Towliszew & Tiffany Fung 5,6,6,6,6, and seventh went to Simeon Stoynov & Kora Stoynova and they took all seventh places.

View the embedded image gallery online at:
http://dancebeat.com/m-blogs-en/item/1162-sfo2016#sigProId11bdb21954
The second feature event of the night was the Professional Rhythm event and here for us it was a close call but for the judges it was clear. Ivan Dishliev & Marieta Nedyalkova were first overall, they took first in four dances and second in the mambo. Second overall was awarded to the couple that won the mambo and that was Riccardo Papi & Sabrina Moretti, leaving all thirds to Ryan Lockhart & Danelle Newman. Fourth was awarded to Johnny Bryant & Ksenia Stavrica 4,4,4,5,6, fifth went to Jeremy Babagay & Carolyn Barreno 5,5,5,6,4, and in sixth was Dan Lee Tran & Taylor Elizabeth Kinney 6,6,6,4,5.
View the embedded image gallery online at:
http://dancebeat.com/m-blogs-en/item/1162-sfo2016#sigProId2085186640
The Amateur Latin was the most attended with some interesting new faces from the East. Nikolai Tarasov & Amanda Herrschaft took first in all the dances but the jive where they placed second. First in the jive went to a very energetic couple, Giulio Ferrante & Linda Martinez Espinosa and here the judges were a little more hesitant to where to place them. They awarded them 2,2,3,2,1. Third went to one of our favorite couples this evening and that was Bumchin Tegshjargal & Michelle Klets 3,3,2,3,3. Fourth was awarded to Hai Tran & Stacey Chuang 4,4T,4,5,4. Mathew Tsai & Joanne Tin-Chung from Taiwan were fifth 5,4T,6,4,5, and sixth was awarded to Christian Solares & Whitney Myers 6,6,5,6,6.

The evening was as sharp as the ballroom itself, it ended with a little time to spend with your friends and unwind from all the excitement. It is sometimes difficult to go right off to bed after so much excitement but by not finishing so late this competition felt like a normal “show” with a little time to reflect and enjoy with others around you.