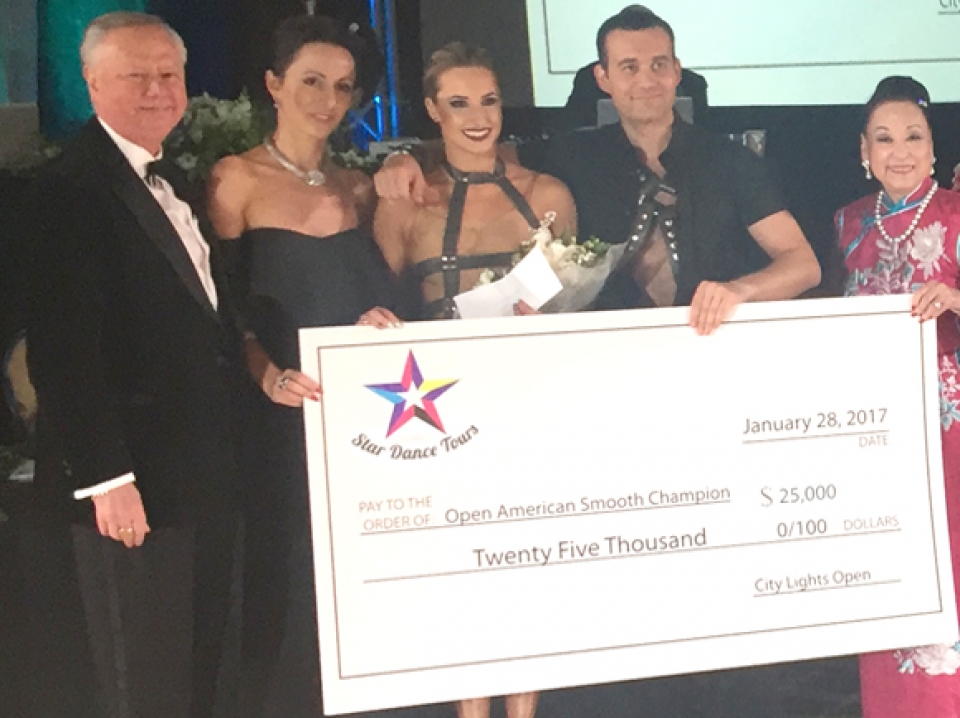 Golden finish for the Star Tours!

There was a golden finish for the Star International Latin Tour and in particular, the Star American Smooth Tour at the City Lights Open the official competition and sponsor of the Star Tours.

View the embedded image gallery online at:
http://dancebeat.com/m-blogs-en/item/1359-citylightsblog2017#sigProId415a163c74
Two huge checks of $25,000.00 were awarded to two couples, one to Hayk Balasanyan & Emila Poghosyan who won the Star International Latin Tour and another to Max Sinitsa & Tatiana Seliverstova for winning the Star American Smooth Tour.
View the embedded image gallery online at:
http://dancebeat.com/m-blogs-en/item/1359-citylightsblog2017#sigProIdbea5f146f7
The Professional Smooth competition was one of the best we have ever witnessed with many of the top professionals in the industry in attendance. The competition started with a quarter final round and it came down to only six couples in the final and leaving, as we expected, two excellent competitors fighting it out for the Wildcard position in the showdance part of the competition. Both Matt Rivers & Maliwan Diemer and Adrian & Hanna Dydynski two very fine couples in the industry were not in the final and in a very special moment as one official put it, Adrian & Hannah pulled out of the wildcard contest and allowed Matt & Maliwan that position without challenge, making it possible for Matt & Maliwan to perform their solo. A very unselfish and good sportsmanship move on the part of Adrian & Hannah.
View the embedded image gallery online at:
http://dancebeat.com/m-blogs-en/item/1359-citylightsblog2017#sigProIde63d6cc265
The Professional Star American Smooth Tour Saturday night was stellar if not out of this world, the winners of the $25,000.00 as we mentioned before were Max Sinitsa & Tatiana Seliverstova, and they won the overall year run with 1531.66 points. Tatiana & Max finished their run with the well known S&M number and here the routine was well received by both the audience and the judges. This left Kyle & Allie Spinder in second place with a score 1468, an actual difference of 63.66 points. The competition between first and second place in the last leg of the tour at City Lights Open was nearly a hairline when it came to the points. Max & Tatiana this last leg with a score of 252.71 to Kyle & Allie’s 250.00 a 2.71 difference in their scores after their solo performance and the audience vote.

Kyle & Allie Spinder took a few hits on this last leg, their scores for just the group competition were not as favorable. They placed second overall but with a rule 11 decision breaking a tie between them and Roman Malkhasyan & Kat Wagner who took third in the group competition. The rules for the group competition are clear you can win by braking a tie but in the Star American Smooth Tour this rule does not apply so the same amount of points applied for both these couples - exactly 18 points each.

View the embedded image gallery online at:
http://dancebeat.com/m-blogs-en/item/1359-citylightsblog2017#sigProIdf0e35749d3
Right through the middle in third position in both the last leg of the tour and the overall competition were Kris & Brianna Suakjian. They placed third in this leg of the tour with a score of 215.71 also the third best score overall and they won third place in the entire race with a score of 863.37 points. This brings me to fourth place in the entire race. Matt Rivers & Maliwan Diemer took this position with an overall score of 680.07 points. Their scores for the final leg last night were 197.57 points total.

Fifth place overall in the Star American Smooth tour went to Roman Malkhasyan & Kat Wagner with 540.37 points. This couple had a great start back in June wining the first leg of the tour, but things soon slowed due to a back injury where Roman was only able to move in a motorized chair for a while. The good thing is they are now back strong and healthy and had enough points to claim the fifth place in the race. Sixth place in the race went to the brother and sister team of Slava & Valeria Kostianets with 306.28 points. Sixth place in the tour was awarded to Mariusz Zakrzewski & Lynnsay Ray, and seventh in the race went to Adrian & Hannah Dydynki.

View the embedded image gallery online at:
http://dancebeat.com/m-blogs-en/item/1359-citylightsblog2017#sigProId408032a040
The Star International Latin Tour was held on the first night of competition and it too had some interesting surprises. Going into the final event, the couples in the mix were nearly all from the East Coast so we knew the peoples’ vote would make a difference and it was all depending on who stayed up to watch the event, remember East Coast is 3 hours behind the West Coast. And so when it is midnight at the competition it is 3AM on the East Coast. This tour was also very close between two couples - Hayk Balasanyan & Emilia Poghosyan and Dmitry & Olena Nikishkin, but in the end when all points were counted including this final leg Hyak & Emilia won by 86.09 points with a total score of 1613.79. Dmitry & Olena were second with an overall score of 1527.70. We have to say that the peoples’ vote helped Hayk & Emilia tremendously and helped them win the $25,000.00. They got a huge percentage of the peoples’ vote and managed to get 38 extra points for this, something that they really needed because in the group competition they placed sixth, so not many points were awarded for this to them.
View the embedded image gallery online at:
http://dancebeat.com/m-blogs-en/item/1359-citylightsblog2017#sigProIdaf088ffca5
Dmitry & Olena got a few more points from the group competition but perhaps not as many as they would have liked, they took third overall and so they got 20 points for this, good enough to help them maintain second position but not to win the last leg. They also did not fair to well when it came to the audience vote they only took 8.5 extra points for this and so compared to the 20 points that Hayk & Emilia got it was not enough to get them over the net. Dmitry & Olena’s solo got also some low marks, their solo was awarded by the judges 89.43, a good score but compared to that of Hayk & Emilia’s 92.29, not as good. So as you can see although it was close Dmitry & Olena went into the final leg in second position and they needed to win big on all counts to surpass their lead. A bystander commented to the tour manager that had Hayk & Emilia not made the group final, this might have been enough to put Dmitry & Olena ahead but it was not to be, Hayk & Emilia did make the final and even though they were sixth overall in the group competition they placed second in the solo and with the help of their fans in the competition and at home they won the tour.
View the embedded image gallery online at:
http://dancebeat.com/m-blogs-en/item/1359-citylightsblog2017#sigProIdcbe8bc3033
Winners of the solo performance with a score of 93.86 were Artur Tarnavskyy & Anastasia Danilova. Unfortunately for them they were good enough to take third in the overall tour but not to get further up in the run, their overall point score was 1216.78. Fourth in the tour was awarded to Andrew Escolme & Amy Baker with a score of 346.44. Fifth place went to Justinas Duknauskas & Anna Kovalova with a score of 282.57. Justinas & Anna won the group competition.