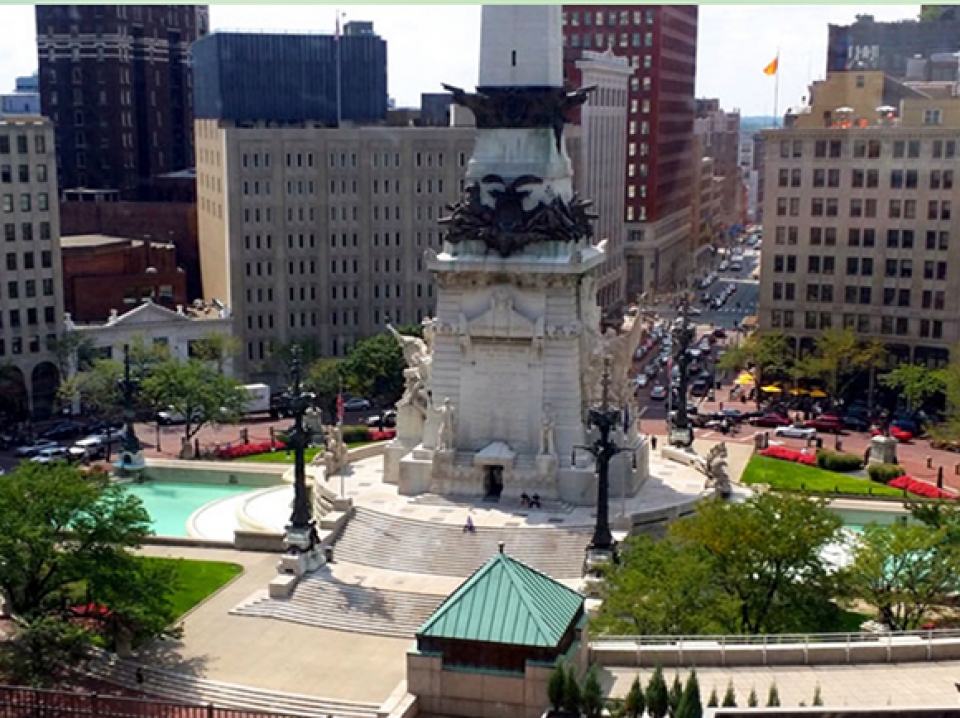 Dancing at the Crossroads of America!

Indiana is known as the Crossroads of America, and Indianapolis backs that name up, with six interstate highways crossing through town.

Washington D.C. is the only city in the country that has more memorials and monuments than Indianapolis. You can spot some of these beautiful monuments by taking a stroll right outside the Sheraton hotel on its beautiful streets around the area. But Indianapolis is not only known for this alone, the very famous “Indianapolis 500” car race attracts millions to the area and it is also home to the Indianapolis Open DanceSport Competition an excellent destination for many who want to explore different and interesting areas of the USA.

The Indianapolis Open DanceSport Competition was two and half days of dance challenges in Pro/Am, amateur and professional events, in all categories and all levels. The competition began with its nightclub events Thursday night and concluded with open professional events Saturday night, the 6th of April.

View the embedded image gallery online at:
http://dancebeat.com/m-blogs-en/item/1739-indoanapolis19#sigProIdf8232e1f8e
The smallest professional event was the professional Cabaret with only three couples entered but we are sure for the judges it was not as easy as it reads. All couples were very accomplished with different storylines and very efficient technical merit. The winners of the Professional Cabaret were Alyenendrov Tsorokean & Maria Wheeler who did an excellent Cabaret routine with some very difficult maneuvers, and who nearly won the competition with perfect scores, only Colin Hilary awarded them a second from a panel of 9 judges. From our perspective they won on the easy execution of all their lifts as well as we mentioned before the some very difficult actions on their program. Second went to what we would call more of a ShowDance routine with a terrific humorous story and some very well executed steps within it, and this was performed by Nick Haklin & Sarah Ford (Nick & Sarah do not appear in the lineup picture because they were changing for another event). And third went to Michael Lundt & Amanda Llic-Lundt who were more traditional in their approach and basically did a Smooth dance.
View the embedded image gallery online at:
http://dancebeat.com/m-blogs-en/item/1739-indoanapolis19#sigProIdf30ea3e118
The Cabaret was a great warmup for the audience for what was about to take place, the Professional Smooth was the most populated and possibly interesting competition, possibly because it was hard to tell who would be up in what placement, and this always makes it very exciting to see. There were three couples that in our opinion could have easily won, Shandor Shtefil dancing once again with Aleksandra Barsukov, Dmitrii Zavialov & Katt Baumgartner & Sergei Shapoval & Mila Popovich. In the end the Sergei & Mila won every dance with the majority of firsts in all dances, but we must point out that the foxtrot and Viennese Waltz was a qualifying majority with 6 out of the 11 panel of adjudicators awarding them first place in these two dances. We have to say that this is perhaps the best effort we have witnessed from Sergei who we have seen dance in the past with a few different partners.
View the embedded image gallery online at:
http://dancebeat.com/m-blogs-en/item/1739-indoanapolis19#sigProId0443b3feaf
Second in all dances went to Dmitrii & Katt, but funny enough they did not steal as many first place marks from the winners only 1 in the tango, and two firsts in the foxtrot and Viennese Waltz. Shandor & Aleksandra stole more firsts but placed third overall, they took three firsts in all dances from Sergei & Mila, so as you can see the competition was up in the air for many of the judges.

Fourth, fifth and sixth place was a little more easy for the judges to sort out. Here Nick Haklin & Sarah Ford placed fourth in all dances, Dmytro Pohybil & Alona Kushnir took all fifths and sixth was awarded to Alexandr Bonev & Olga Aidasheva.

View the embedded image gallery online at:
http://dancebeat.com/m-blogs-en/item/1739-indoanapolis19#sigProId3be30ae2f0
In the Professional Latin the winners overall by placing first in four dances and second in the paso doble were Aleksei Alekseev & Ekaterina Derevleva. Although we were torn between them and Aleksei Shipilov & Julia Mitina, we have to say it was a good decision after all. Aleksei & Ekaterina for us had a little more depth in their work, Aleksei & Julia on the other hand want to win by knocking the doors off of the “hinges.” Nearly every step is punch and every move is an attack, there is little subtlety or story to their work, so perhaps this is where Aleksei & Ekaterina got the upper hand and won. We must also point out that although Aleksei & Julia could have won their marks were out of the ball park to win, take a look 2T,2,3,1,2. Third in this heat went to Dmitrii Chopenko & Valeria Khrapa 2T,3,2,3,3, and fourth in all dances was awarded to Lurii Kora & Alisa Hryn.
View the embedded image gallery online at:
http://dancebeat.com/m-blogs-en/item/1739-indoanapolis19#sigProId5f390a4dc1
Aleksei Shipilov & Julia Mitina won by far the Professional Rhythm and all dances with a majority of firsts from the judges. We were a little undecided between David Nyemchek & Maysen Wilder and Senso Makhaye & Agnieszka Strojek for second place, but in the end experience won over interest and Senzo & Agnieszka seemed to show plenty of experience placing second in all dances, and leaving third to David & Maysen. Fourth was awarded to Richard Kaszas & Foteini Pangea, and fifth went to Nicolas Rodriguez & Paulina Struk.

With this the Indianapolis Open DanceSport Competition came to an end. The daily schedule ran smoothly all three days and there was plenty of competition for all to see and to have.