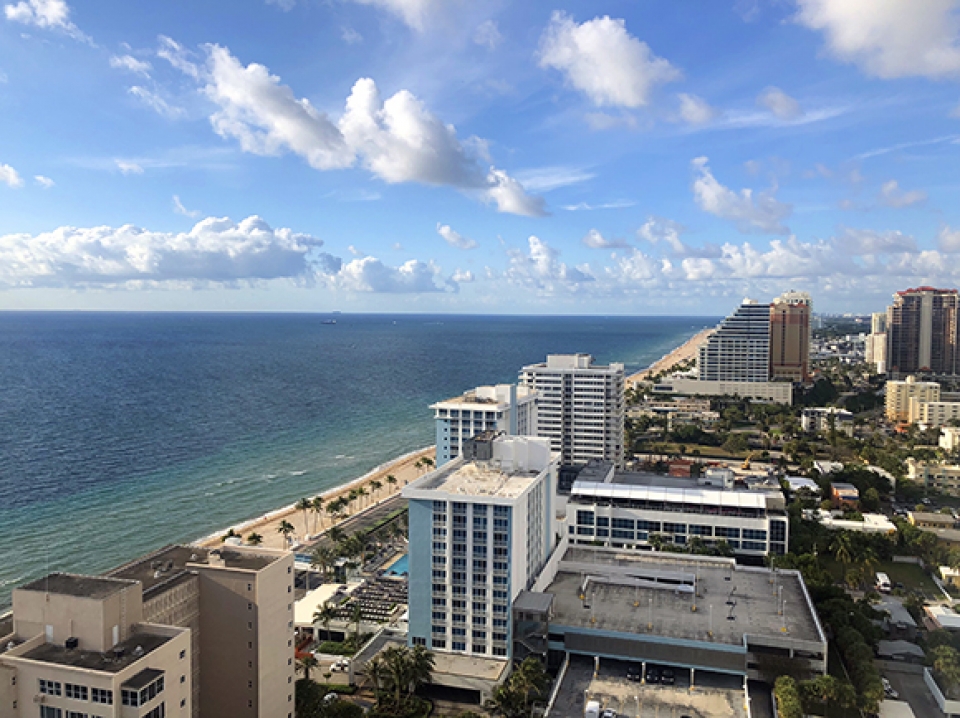 Beginning with a semifinal, the Amateur Latin was the largest event of the last night of Miami Vibe 2019

View the embedded image gallery online at:
http://dancebeat.com/m-blogs-en/item/1748-miamivibe19#sigProIdf5c85d70d3
In a final that included 3 couples from Portugal, the judges found little consensus in this hard fought event. Eventual winners were Ron Garber & Klaudia Petriti and they scored 2,1,3,1,1 and this put them 2 points ahead of Yevgeny Orlov & Maryna Yerina with 1,2,1,2,4. Ron & Klaudia had the majority of 1st places in only jive, whereas Yevgeny & Maryna had the majority in the 2 dances they won. 3rd and 4th places were even tighter, needing a Rule 11 to give the final result, and this was 3rd, Brunno Roche & Barbara Marques (Potugal) with 3,4,4,3,2 over 4th Giovanni D’Arpino & Francesca Vari 4,3,2,4,3. The two remaining places went to Portugal and the couples finished in the same position in all dances – 5th Diogo & Raquel Ferreira and 6th Francisco Sa & Maura Roche.
View the embedded image gallery online at:
http://dancebeat.com/m-blogs-en/item/1748-miamivibe19#sigProId7ec766bca9
One of the busiest couples on the circuit right now, Dmitry & Olena Nikishkin flew in to compete in the Pro Rhythm and were the undoubted winners, losing only 1 first place out of a possible 75. That was a 3rd in the bolero from judge, Sarwat Kaluby. Another very prolific couple on the circuit, Jang & Adele Don took the runner-up spot, placing 2,2,2,2,4, leaving the RS winners Tomas Vasicek & Vitalija Tyrnova with 3rd, 3,3,3,3,2. Igor & Anastasia Puzhevich were 4th, although they took 3rd in mambo 4,4,4,4,3 and Charles Cunnigham & Evgeniia Elcoro were 5th in all dances.
View the embedded image gallery online at:
http://dancebeat.com/m-blogs-en/item/1748-miamivibe19#sigProId580e3a41d7
Nazar Batih & Mariko Cantley were the winners in the Pro Ballroom. They had the majority of 1st places in the first 4 dances but lost the QS to the RS winners, Artemiy & Marina Katashinsky who were 2nd in the other dances and mounted a surprisingly strong challenge, taking 7 of the 15 first places in FT and 8 to win the QS. Aleksandr & Aida Skriptsov were 3rd in all dances and Marenko & Tatiana Voilokva were 4th.

It is always difficult for an organizer to move venues when not expecting to. All in all, the event was a success in its temporary location in Ft. Lauderdale, but next year it will be back in Miami at the iconic Eden Roc Hotel.

When the Eden Roc Hotel informed Andrew Phillips, organizer of Miami Vibe, that they could not host his event for 2019, it seemed like a disaster, but for 1 year, Miami Vibe moved 30 miles north to the W Hotel on Ft. Lauderdale Beach – and it is a success.

View the embedded image gallery online at:
http://dancebeat.com/m-blogs-en/item/1748-miamivibe19#sigProId961dd4270c
The upscale hotel sits right on the water and has plenty of restaurant and bar possibilities on property and nearby. But for Miami fans, the Vibe will be back at the Eden Roc in 2020.

The competition began on Thursday, but last night we saw the first of the open professional events – Smooth and Latin and both were high quality events.

View the embedded image gallery online at:
http://dancebeat.com/m-blogs-en/item/1748-miamivibe19#sigProId004267069e
The Smooth began with a semifinal and a final of 6 were returned. Unusually, the final was danced in 2 heats, as the ballroom is somewhat compact! The easy winners were Roman Malkasyan & Galina Detkina who lost very few 1st place marks. Those that they did lose went to runners-up, Sergey Samchynskyy & Yulia Besarab whose best-scored dances were tango and VW. They were 2nd in all dances. We were impressed with the improvements in the 3rd placed couple, Nikolai Pilipenchuk & Sarika Hudson. They were 3rd in all dances, but their foxtrot was well marked, they received 6 scores of “2nd or better” in that dance. Jang & Adele Don were a strong 4th, taking that position in all dances; 5th in all were Dmitry Zavialov & Katt Baumgartner and 6th in all were Sergey Shapoval & Milana Popovich.
View the embedded image gallery online at:
http://dancebeat.com/m-blogs-en/item/1748-miamivibe19#sigProId69ad0dd939
The Open Latin was a 7-couple final and again, Chairman of Judges, David Don, made the decision to split the samba and paso doble into 2 heats. The judges were far less decided on this one. The win went to Canadaa’s Ilya Maletin & Polina Mayer 1,1,2,1,1. However, they received the majority of 1st places only in samba. To us they lacked some of their usual sparkle on this occasion. Winning the rumba and taking 2nd in the other dances were Ivan Mulyavka & Karin Rooba, who we felt had a good night. Karin in particular seemed to enjoy the more intimate space of this ballroom. Also in this mix were Nikita Malakhov & Nadezda Vlasova who were 3rd 3,3,3,4,3. They picked up first places from the judges in all dances. Ivan Kudashev & Kshusha also had their supporters on the judging panel placing 4,4,4,3,4 overall but also taking 1st places in all dances. They also won the Cabaret with their Gypsy routine earlier in the evening. 5th went to Alexander Nabiullin & Valeriya Ryabova 5,5,5,5,5; 6th Miguel Angelo & Angela Santos (Portugal); 7th Artemiy & Marina Katashinskiy (Russia) 7,7,7,7,7.
View the embedded image gallery online at:
http://dancebeat.com/m-blogs-en/item/1748-miamivibe19#sigProId813051f7a0
All the ladies in these 2 finals were invited into a drawing for a piece of jewelry designed my Mariko Dozono. Angela Santos and Galina Detkina were the lucky winners. Mariko also donated jewelry piece to the winner of the “Best in Show” pro-am solo competition that was judged by audience text votes.  Diana Horton was the winner.