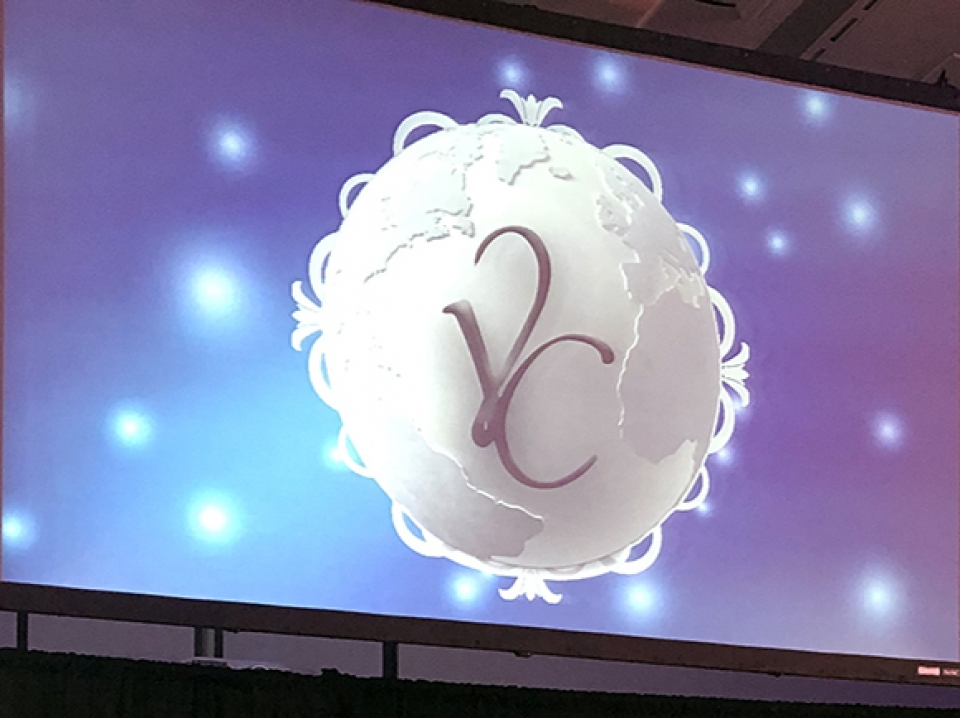 The Organic Sense of Rhythm!

The Professional Rhythm at the Yankee Classic last night was fantastic and for us the best part of what we saw in this excellent final was the “organic” approach a number of the dancers are taking.

And there were a few that we could have easily seen winning the competition, something that should just be as “organic” as the style itself.

View the embedded image gallery online at:
http://dancebeat.com/m-blogs-en/item/1765-yankee2019#sigProId23306ef394
The winners in every dance with a huge majority of firsts in all were Dmitry & Olena Shvets Nikishkin, and they certainly were skilled and good enough to win the competition but for us, what is lacking at times especially in the cha, rumba and mambo was the organic elements that “Rhythm” dancing requires. We know “organic” is a complex subject to talk about and it always brings the question, first what is organic? To us “organic” is perhaps the “root” of all things, and when we are hearing some of this South American music playing we want to see and hear what the songs are dishing out. Take for example the cha cha for last night’s performance, there was absolutely nothing wrong with Dmitry & Olena’s cha cha had it been done in Open Latin. But here in the Open Rhythm for us mainly we expect something with a little more “Organic” nature, something a little more out of the box with a little more soul. And so we agree with Mr. Barrera the only judge to award them third in this dance.

For us the performance of Alberto Cortez & Jessa Briones and Andrew Escolme & Amy Baker last night was very “Organic,” with so much rhythm and fresh and unique elements, that was almost contagious. We know that it’s very hard to move up the ladder in this business or should we say (move the judges in either direction), but on last night’s performance Andrew & Amy moved the judges enough with their excellent “organic” performance and were placed second in every dance, something that was a total shock to Alberto & Jessa who placed third in every dance. Alberto & Jessa were a little surprised as they were called for this position in the final during the awards and we don’t really blame them, as we mentioned before, it usually takes an act of Congress to get the judges to react beyond the status quo.

View the embedded image gallery online at:
http://dancebeat.com/m-blogs-en/item/1765-yankee2019#sigProIdca7482738a
As we mentioned before, we too though that Alberto & Jessa had a terrific and very “organic’ performance in this final but it did not come with the solid physical strength and “stop on a dime” to support it, like Andrew & Amy’s. When looking at their performance it looked a little wobbly at times and a little shaken, it was still for us good enough to beat Dmitry & Olena in the cha cha and for sure in the mambo, where their performance was so “organic,” that at least 3 judges out of the 13 panel awarded them first in this dance.

Having said all that this, Dmitry & Olena won the competition and yes they too had some “organic” moments especially in the swing, where they exceled and in the bolero. Most of you might not know, but this is a dance that is always passed from generation to generation and is still being done today at “Latin” weddings and dances when most have gone home and the “tango” and boleros come out along with the rancheras and singing. LOL

Speaking of a non organic performance fourth place was awarded to possibly the most non “organic” couple in this final Aleksei Shipilov & Julia Mitina who took all fourths. Had their work not been so well organized, we totally believe they would have been placed last in this final. But, once again that was not to be, fifth place in all dances went to Senso Makhaye & Agniezka Strojek, a clinical performance for us with a touch of organic feel. A total organic couple in this final was Kemar Bennett & Jessica Nicol who placed sixth in all dances. Unfortunately, their work was not clean enough to get any higher, judges always prefer clean easy work you can read to messy and strange.

View the embedded image gallery online at:
http://dancebeat.com/m-blogs-en/item/1765-yankee2019#sigProIdd186c75b39
The ”World Masters Professional Open International Latin also took place and it too was greatly attended. The word organic may also apply here to the cha cha where only the winners, Artur Tarnavskyy & Anastasiya Danilova, for us grounded themselves enough for us to enjoy their characterization of this “cheeky” dance, that is the cha cha cha. The rest of the crew including Pasha Stepanchuk & Gabrielle Sabler who just turned professional were good enough but left us empty and in the need of some “organic” movement. Pasha & Gabrielle took second in all dances and also stole a few marks from the winners. But we have to point out that Artur & Anastasiya only lost 2 first places in the cha cha and they came from Bruce Hasson and Ron Montez. The rest of the final was also a copy of the cha cha with a couple dances losing another first place mark or two.
View the embedded image gallery online at:
http://dancebeat.com/m-blogs-en/item/1765-yankee2019#sigProId7fc6d520f6
Third place in this excellent final was awarded to Ivan Kudashev & Ksusha 3,3,4,3,4, as you can tell by the marks the judges were a little more divided on this couple. However, we felt that Ivan & Kusha had a wonderful night, it began with their Showdance in the cabaret division where they performed the best “gypsy” number we have seen so far giving them a second place finish in this event. Alexandr Nabiullin & Valeriya Ryaboba took fourth 4,4,3,4,3, a well deserved position for this couple as well and they did indeed have a terrific night, an emphasis on consistency. Fifth place went to Stanishlav Savich & Nicole Prossor who both sported a gray t-shirt, that at some point allowed the perspiration to come through, not a great look we must say unless your about to rehearse or go in a sauna. 6th was a very energetic couple that drew our attention in this style, Aleksei Shipolov & Julia Mitina 6,6,5,6,6.
View the embedded image gallery online at:
http://dancebeat.com/m-blogs-en/item/1765-yankee2019#sigProIdc7949fc3d6
The Cabaret was also a terrific competition and the couple that won was a Cabaret style couple with mainly lift work, Arsen Sargsyan & Jessica Jonikai. They did some excellent lift work totally deserving of possibly a second position to Ivan & Ksusha, mainly because they had to rescue a lift, and had a number of fumbles in their routine. We do have to agree with the majority of the judges, the difficulty of some of the work was terrific but for us if you wobble or miss you should be marked down. Ivan & Ksusha were second, Sergey Izyumov & Oksana Zaver placed third with a very sad and dark number, we wonder if so much sadness might have affected their standing, although the routines was perfectly executed it really makes you wonder is a judge connected to that much “depression” would be able to mark it first? And Last but not least in fourth place was Nikita Zhukovskyi & Angelina, even though some of the lifts were quite interesting and difficult Nikita is perhaps a few extra pounds over to be able to showcase wonderful lines and carriage of posture and body.
View the embedded image gallery online at:
http://dancebeat.com/m-blogs-en/item/1765-yankee2019#sigProId5aaa704fe4
The Professional Ballroom was a six-couple final but of great quality all around. The winners on this night were Andrew Begunov & Anna Demidova winning all dances with a majority of firsts from the judges. We do feel and have to tip our hat to the home couple, Nazar Batih & Mariko Cantley, who had it all going for them last night, the crowd loved them, her costume for us was perhaps the best on the floor and the quality of dancing in all but in particular the tango, could have easily given them the win in our opinion. They placed second in all dances. Third in all were Sergey Izyumov & Oksana Zaver, and they also had a terrific night. Mechyslav Pavlyuk & Gemma Arnold were fourth, Ivan & Maria Levin took all fifths and sixth went to Mykhailov Anufriiev & Anna Viertynska.

In the Professional American Smooth the top three couples are definitely worth a mention Marcio & Saori DeSouza who were 3rd, Christian Lightner & Kia Kenny who placed second and Aleksandr Vokusavljevic & Neveda Urosevic who were first in every dance.

The “World Masters Amateur International Latin Championships” also took place and here it was a good quality heat with some terrific dancing, but when it came to their paso doble it looked more like war than a bullfight arena. People! Like a prominent coach told me, I know things have progressed beyond the basic dance, but the where has the “organic” part of the paso doble gone? Where has the bullfight gone? In place there is only sad carnage after the second and first highlight, the feeling of a bullfight even on the basic promenade from step to step is out of it and replaced with a sore! Think about it, you must keep the essence of a dance no matter what and some of the “organic” movements that makes it a dance. And what about the footwork, especially on the ladies? Do you just step on any part of the foot available!! People!!

In the Pro/Am ballroom the winners of the “A” were Sabryna Zhang w/ Nazar Batih, in the “B” Monika Ruszkowski w/ Gunnar Sverrisson, the Senior went to Kyle Brown w/ Aregey Bondarenko and the “C” was Kako Matsumoto w/ Basil Issaev.

View the embedded image gallery online at:
http://dancebeat.com/m-blogs-en/item/1765-yankee2019#sigProIdccfeb4574e
During the evening, Judi Hatton the 1st Vice President of the NDCA, presented John Nyemchek with an award from the NDCA, for fedication through "Roll Call Wheelchair Dance" by bringing joy of Partner dance to individuals of all ages in Wheelchairs and with movement Disorders.

Congratulations to the organizers, John & Cathie Nyemchek, for keeping the Yankee Classic an act of its own.

Rising Stars at the Yankee!

Last night was all about the Professional Rising Stars competitions and all four of the styles were contested.

We’ve had two full days of Pro/Am competition and most of the Open Scholarships are finished. The Rhythm “A” open went to Maria Fuentes w/ Kemar Bennett. In the “C” Division the winner was Jennifer Marre w/ Delyan Terziev and the “B” division went to Irene Wong w/ John Campbell, leaving the Senior to Vivian Shah w/ Andrew Escolme.