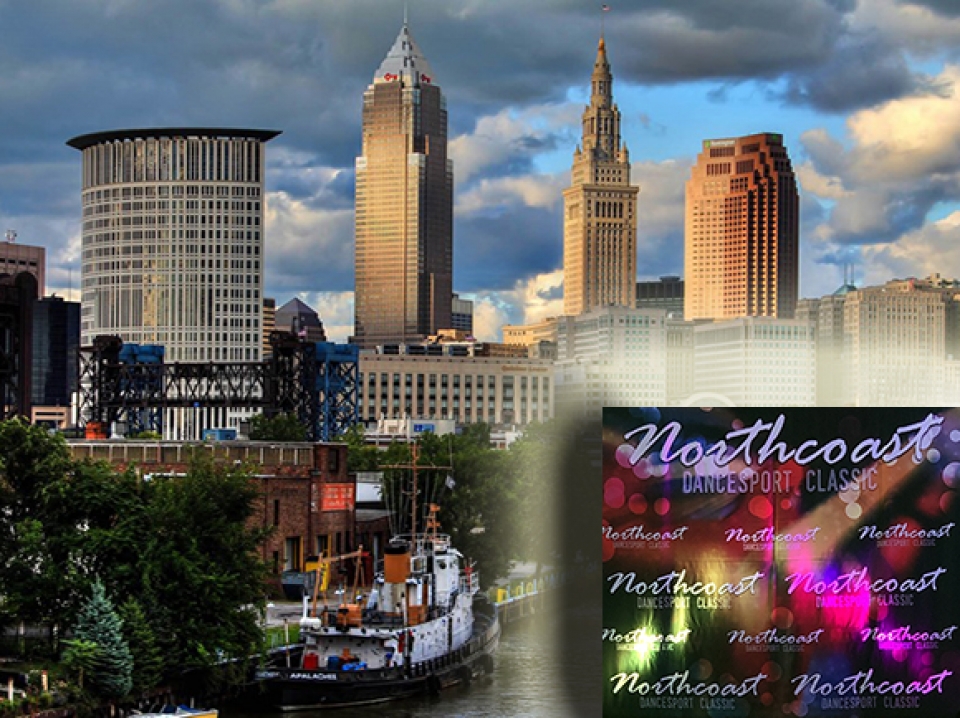 Great Night but Difficult for the Judges!

The last night at the Northcoast Dancesport Classic was terrific, full of talent, creativity and great up and coming couples.

In all the open professional events combined it was hard to find a US finalist but what we did find was great competitions to judge and to watch, so full of energy and enthusiasm, making the job for the judges a difficult one!

All categories were well attended, but the Open Professional Ballroom only had a final. Like the night before the Smooth and Rhythm, as at most events nowadays, were very prominent here also on the Northcoast.

View the embedded image gallery online at:
http://dancebeat.com/m-blogs-en/item/1769-northcoast19#sigProId1fc49138f0
The Rhythm had possibly the most interesting result for us with Toshko Kondov & Kriste Dobson winning all dances, and wining them all with a majority of firsts from all the judges. We have to say that we were also quite impressed with Toshko & Kriste’s dancing, but we felt it was not their finest performance. We found Toshko a little laid back and in some dances not attacking or fighting strongly enough to secure all dances as the majority of judges had them. Perhaps it might have been due to the fact that he hardly ever left the floor, he danced all three days with most of his students and even on the final night we think we saw him still out there working.

Nevertheless, Toshko & Kriste were for certain terrific in their cha cha only losing two first place marks a second from Linda Jackson and a fifth from Jolan Sniegocki from Canada, these two judges continued awarding them low marks in the rest of the dances, and were join by Mr. Barrera who awarded them these marks 1,3,3,2,3, and Ms. Rozana Sweeney who awarded them 1,1,2,2,1. We have to say their dancing was very correct and some on the panel said to us during the after party, that they were the only ones doing “American Style”, making us wonder what they meant by that? We must remember this terrific answer for later, because it sounds like a good “copout,” when a question as to why you marked the couple to win. Nevertheless, we do have to agree that their work was very organized and easy to read and follow, but for us it lacked the energy and power of freshness required for this terrific night.

View the embedded image gallery online at:
http://dancebeat.com/m-blogs-en/item/1769-northcoast19#sigProId90c0fa8ede
Second in this Open Rhythm division went to Aleksei Shipolov & Julia Mitina. Speaking of not doing “American Style,” perhaps this might be a couple where this might apply. As you will see this couple also competed in the International style earlier this evening and we reall,y truly did not see a difference between the styles. So perhaps the judge had a point here with this comment. We feel that Aleksei & Julia have great energy, never, ever looking tired or even a hair out of place, but, their work whether International or American all looked the same, and even the dances nearly all looked the same - lots of power and great lines but little when it comes to individuality of style or content. So perhaps this was reflected in their marks from the judges here they are 2,2,2,3,3.

Although their dancing is not the most usual you will see because they for sure grab your attention at every corner, stop and dance - Artem & Ginny Ray Shiller for us had something in the content of their Rhythm that makes them special, is it “American Style?” That we don’t know because we think this is still being debated in some quarters, but they do have what we look for - a uniqueness to express what they are hearing and it is not like anyone else. From the marks you can see that that uniqueness made the judges go up on their marks in the last true American Style dances the bolero, and the mambo. For us American style like Bob Powers, former World and US American Style champion once said “should be the epitome of self expression, there is nothing right or wrong just give us what you want us to see, as if you’re in a nightclub feeling it out.” I think with Artem & Ginny we have a perfect example of this, we do feel her hip action could be a little more as my teacher “Bobby Medeiros” used to say more “Down, Deep, and Dirty,” yes the three D’s to not be so internal, but a little more external and South American. Here were their marks 3,3,3,2,2.

Fourth to sixth seemed to get easier to mark for the judges Enoch Evans & Anastasia Gordeeva were fourth in all dances, Dustin Donelan & Georgietta Anderson placed fifth in all and Ernesto Olivas & Megan Strong took all sixths.

View the embedded image gallery online at:
http://dancebeat.com/m-blogs-en/item/1769-northcoast19#sigProId5a76205f0d
In the Open Professional Smooth it was almost a repeat of the night before. Dmytro Pohybil & Alona Kushnir won all dances with a majority of firsts and yes we agree that they were possibly the most settled and calm couple on the floor this time, but we still feel that perhaps the couple that placed second in every dance, Drew Miller & Krista Humphrey could have won more than a dance or two. Unfortunately, on this night Drew & Krista were possibly trying too hard and pushing each other a bit more than they needed too. We still like their presentation and unique approach to the style a lot more than the winning couple’s, but we must also add that these are two great couples with tremendous potential in this excellent field of Smooth dancing.

Third place in this excellent Smooth heat went to Martin Pickering & Natalie Botes placing third in all dances. Here I think the dancing is very correct but there is little effort to break from the pack and be brilliant. Hair is perhaps flowing way out control at times not helping their cause. Dmitro Krasnyanskiy & Esther Frances took all fourths; Aleksandar Bonev & Olga Aidasheva took all fifths and Dustin Donelan & Georgietta Anderson were sixth.

View the embedded image gallery online at:
http://dancebeat.com/m-blogs-en/item/1769-northcoast19#sigProIdcdb565433d
The Open Professional Latin was also a very exciting heat at the Northcoast. The easy winners for us were Ivan Kudashev & Ksusha with these marks 1,2,2,1,1. As you can see it was not as easy as we thought, they placed second in two dances so only won by one dance. I have to agree with many of the judges that Maksim Kapitannikov & Elena Nesterova were an excellent couple and when it came to clear understandable work they had my attention. You really could not fault them on anything. I can honestly see either one of these couples winning this competition, but, in looking at the marks I noticed some of the judges awarded these excellent couples some very low marks like the number of sixth place marks Linda Jackson awarded Ivan & Ksusha, 6,6,6,5,5, and the 5,5,3,3,4, Maksim & Elena got from Terry Sweeney. Nevertheless, that is why 13 judges are usually used in these kind of events so that in the end an overall decision can be obtained.

View the embedded image gallery online at:
http://dancebeat.com/m-blogs-en/item/1769-northcoast19#sigProIdd3a163a158
The Ballroom was almost a repeat of the night before except that this time Alekseiv & Elena Minaev were added, they won every dance with a majority of first in all dances. Second in all dances was awarded to Riccardo Conte & Eleonora Filippi; third was Oleg Teleha & Michelle Brecker and fourth went to Kent Berkey & Yuko Ota.

We have to say that Marielle & Carlos Pabon outdid themselves with the service to all participants and attendees. The quality as expected in this Northcoast City of Cleveland was great and we were busy day and night in the ballroom with great atmosphere from guest and participants alike.

Dancing on the Northcoast!

Last night at the Northcoast, it was Rising Star time, with all the professional Rising Star competitions taking place.

View the embedded image gallery online at:
http://dancebeat.com/m-blogs-en/item/1769-northcoast19#sigProId575c161967
The biggest of all was the Rising Star Professional Smooth where a full semifinal round was held. Wining all dances in this professional Smooth heat were Dmytro Pohybil & Alona Kushnir; second in all dances was awarded to Drew Miller & Krista Humphrey, and third went to Martin Pickering & Natalie Botes in all dances.
View the embedded image gallery online at:
http://dancebeat.com/m-blogs-en/item/1769-northcoast19#sigProId45d69f5add
The rest of the Professional Rising Star Smooth was also quite easy on the judges’ marks - Dmitry Krasnyanskiy & Esther Frances placed fourth in all dances. Aleksandar Bonev & Olga Aidasheva were fifth in all and Dustin Donelan & Georgietta Anderson were sixth.

In the Professional Rising Star Latin we had four excellent couples and here Bozhidar Elkin & Elena Dumanova were first overall with these marks 1,2,2,1,1. Second was awarded to Malachi Osai & Freda Chan; third went to Daniele Fulvi & Veronika Criscione and they took all third in all dances and finally fourth in all went to Rusland Pashayev & Rachel Hakversen.

View the embedded image gallery online at:
http://dancebeat.com/m-blogs-en/item/1769-northcoast19#sigProIdc9c88ae6a5
The smallest of all heats was the Professional Rising Star Ballroom and here Riccardo Conte & Eleonora Filippi took all first place marks. Second in all was awarded to Oleg Telha & Eleonora Brecker leaving Kent Berkey & Yuko Ota holding third in all dances.

Tonight we should see all the Open events so stay tuned for how all fare at the Northcoast this excellent weekend of dance.