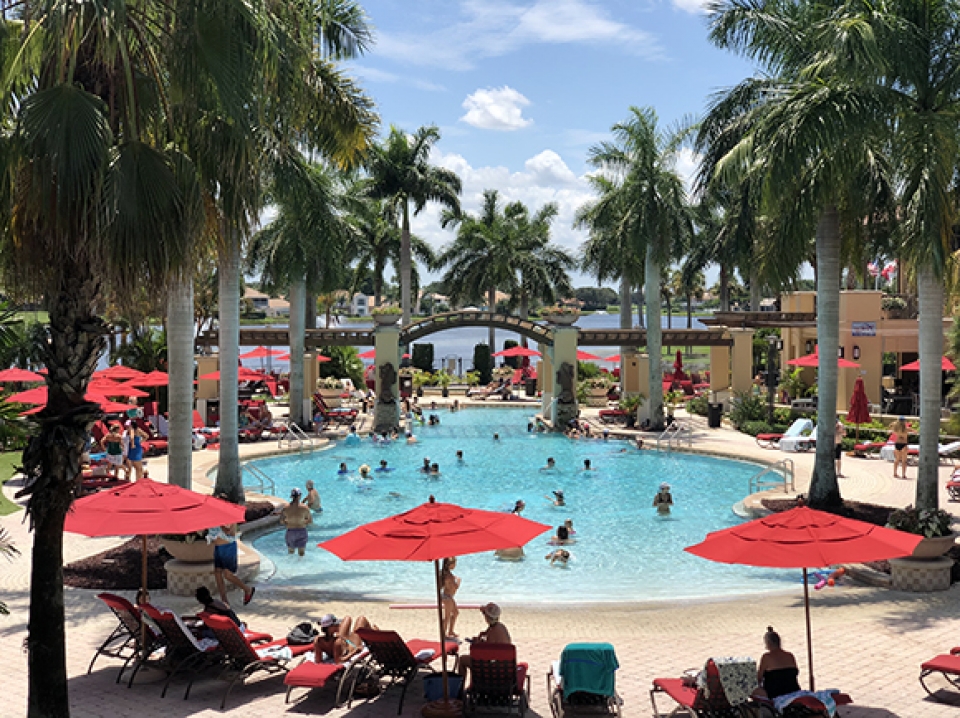 The Rhythm Is Gonna Get You!

Last night at the Boca Ballroom Dancesport Competition the Rhythm totally got us with an excellent semifinal round and an excellent final that made out “bocas” drop!

View the embedded image gallery online at:
http://dancebeat.com/m-blogs-en/item/1790-boca2019#sigProId49c6274613
Dimitry & Olena Nikishkin, had one of the best performances we have seen from them. For us they are finally grabbing the bull by the horns and making Rhythm a piece of their own, or as they say here in the USA, totally owning it! They won all dances with a majority of firsts and with perfect scores in the cha cha and rumba. In the other 3 dances Sarwat Kaluby was the only judge to keep them from getting a full sweep in all dances he awarded them a second in the swing and bolero and a fourth in the mambo.
View the embedded image gallery online at:
http://dancebeat.com/m-blogs-en/item/1790-boca2019#sigProId3389dbf783
From second place down the judges were more varied in the marks and for us we saw it differently as well. Jang & Adele Don won second place overall with these marks 3,2,2,2,3 and Anton Tregubov & Ashley Sanchez were third 2,3,3,3,2. For us the runners-up could have been easily Anton & Ashley who displayed a more natural approach to every dance, while on the other side, for us, Jang & Adele looked a little more studied and focused on the exercise rather than the performance.

Fourth in all dances went to Antonio Nunez & Ksenia Kashkina, fifth were Zachary Germain & Janna Caskie and sixth in all was awarded to Charles Cunningham & Evgeniia Elcoro.

View the embedded image gallery online at:
http://dancebeat.com/m-blogs-en/item/1790-boca2019#sigProIdccbbdbe5cf
The Professional Ballroom was also an excellent event even although there were only five couples entered in this heat. Alexander & Veronika Voskalchuk won all dances with a majority of firsts and the foxtrot with perfect scores. Second in all dances was awarded to Nazar Batih & Mariko Cantley and they were the only couple to steal a few of the first place marks from Alexander & Veronika. Third in all dances was awarded to Aleksadr Skriptsov & Aida Skriptsova, fourth were Aleksei Alekseev & Ekaterina Derevleva and fifth in all were Brad Montagnese & Tania Trigili.
View the embedded image gallery online at:
http://dancebeat.com/m-blogs-en/item/1790-boca2019#sigProId2dfb851096
The Professional Rising Star Smooth was awarded to Artem & Tatiana Merenkov, second were Antonio Nunez & Ksenia Kashkina 2,2,3,2, and third went to William Proper & Jennifer Elliott 3,3,2,3. The Rising Star Latin also took place and here Aleksei Alekseev & Ekaterina Derevleva won all dances, second were Brad Montagnese & Tania Trigili and third in all were Vitalii Tozik & Angelica Downey.

Boca Ballroom, Fun in the Sun!

Yesterday was a full day of dancing here at the Boca Ballroom in Palm Beach, Florida.

But that was not all, if you’re a golf aficionado the PGA golf course just behind the hotel is beautifully groomed and ready for you to enjoy and the pool area was full of vacationers all morning long.

View the embedded image gallery online at:
http://dancebeat.com/m-blogs-en/item/1790-boca2019#sigProIdfae680b042
In the ballroom we had a full day of pro/am Latin and Ballroom divisions and at night there were plenty of professional competitions. The Cabaret Professional was among the smallest in attendance but very entertaining with two great couples going head to head. The winners were Craig Smith & Andrea Harvey who got a standing ovation from the audience and almost a full majority of firsts from the judges. With the exception of Didio Barrera who awarded Nazar Batih & Mariko Cantley a first, the rest awarded Craig & Andrea first and we have to agree their lift work was very impressive with some astronomical lift and difficulty. We would agree with all including the audience, except that we did see a slight strain in some of Craig & Andrea’s transitions something that was not present in Nazar & Mariko’s faultless and well executed Ballroom Showdance. Yes we do believe it was a little like comparing apples and oranges when it came to judging this division.
View the embedded image gallery online at:
http://dancebeat.com/m-blogs-en/item/1790-boca2019#sigProIdb07013158e
The second biggest hit and also not in bodies entered but in quality was the Open Professional Latin where 4 couples took to the floor. Here, Artur Tarnavsky & Anastasia Danilova had a three to two win over Ivan Mulyavka & Karin Roba, we have to agree with the MC who said it was truly a close call on this competition. To us it was possibly closer than what you will see on paper from the judges. Artur & Anastasia won the three dances with a majority of firsts but only the cha cha with a huge majority of 9 out of 13 judges. The samba, as well as the rumba they won with just the qualifying 7 first place marks in each, to give them a majority. Ivan & Karin were very close with 6 first place marks in 3 dances and 8 in the jive.
View the embedded image gallery online at:
http://dancebeat.com/m-blogs-en/item/1790-boca2019#sigProIdd9a080a06f
Aleksei Alekseev & Ekaterina Derevleva placed third overall in all dances in this exciting Professional Latin final and Brad Montagnese & Tatiana Trigili were fourth. These two last couples just mentioned also battled it out in the Rising Star Ballroom and in this division Aleksei & Ekaterin won all dances with a majority of firsts and the foxtrot with perfect scores from the judges, leaving Brad & Tatiana holding second.
View the embedded image gallery online at:
http://dancebeat.com/m-blogs-en/item/1790-boca2019#sigProId85b8f9c762
The Professional Smooth also took place this night and here the obvious win went to Jan & Adele Don who won all dances with a majority of firsts in all dances and perfect scores in the W,F,VW. Second was awarded to Antonio Nunez & Ksenia Kashkina with these marks 2,2,2,3. We could see this came as quite a surprise to some of the competitors when awarded but when looking at the marks Antonio & Ksenia got the majority of “second or better” in the three dances they placed second. Second in the Viennese Waltz went to William Proper & Jennifer Elliott but third place was awarded in the other three dances for an overall third. Dmitry Krasnyanskiy & Esther Frances placed fourth overall 4,4,4,5, and Marcio & Saori DeSouza took fifth 5,5,5,4.
View the embedded image gallery online at:
http://dancebeat.com/m-blogs-en/item/1790-boca2019#sigProIda748df1dfa
Antonio Nunez & Ksenia Kashkina also won the Professional Rising Star Rhythm where 6 couples took to the floor.

Tonight is the final day of competition here in the Boca Ballroom Dancesport Competition, we are working on the Pro/am Smooth during the day and the rest of the professional events will be run tonight.