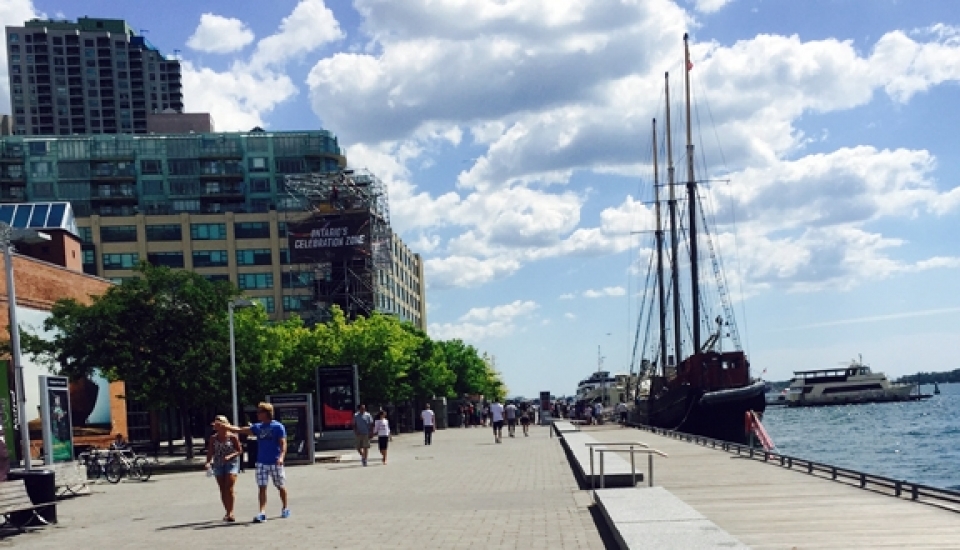 Can-Am Closes on a Golden Note! 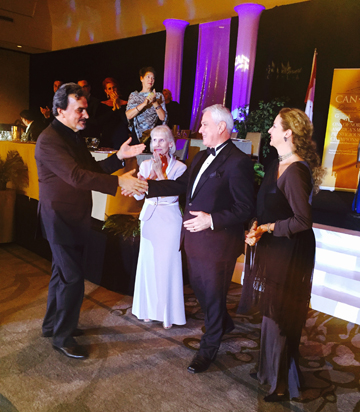 The 2015 Can-Am Dancesport Gala came to a close Saturday on a golden note.  Well known dancer, competitor and main character documentary feature films “Mad Hot Ballroom,” and “Dancing in Jaffa” Pierre Dulaine was presented with the Can-Am’s Lifetime Achievement Award. It was very emotional for the organizers and everyone came to their feet as he was introduced.  Pierre was very gracious and soon after the competition was finished and the show was over he stayed and took pictures with many of the fans.

The feature events Saturday night were the Professional Smooth that started with a semifinal and the Professional Latin. Both competitions were excellent and entertaining to us and the audience who stayed in their seats until the very end. The Professional Smooth went to Kyle & Allie Spindler from the USA who won all dances and far out danced everyone else.  Kyle & Allie also won the Cabaret competition the same evening. Second in every dance went to Canada’s Dmitry Ilyushenov & Kateryna Stytsenko, this couple was totally worthy of this position and a surprise to a number of judges who wondered why they do not compete more often in the USA. Adrian & Hanna Dydynski were third in all dances, we are sure a few attendees and even possibly Adrian & Hanna were a little surprised to have a Canadian couple get ahead of them. 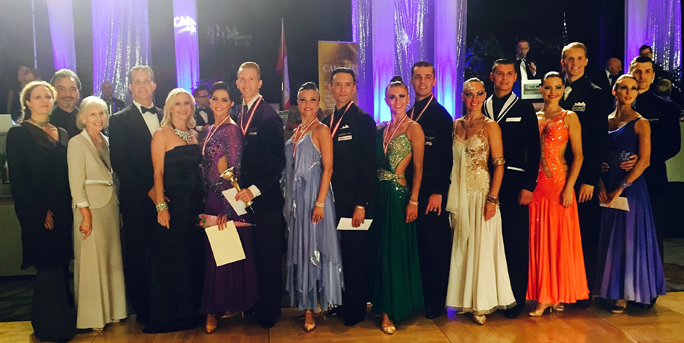 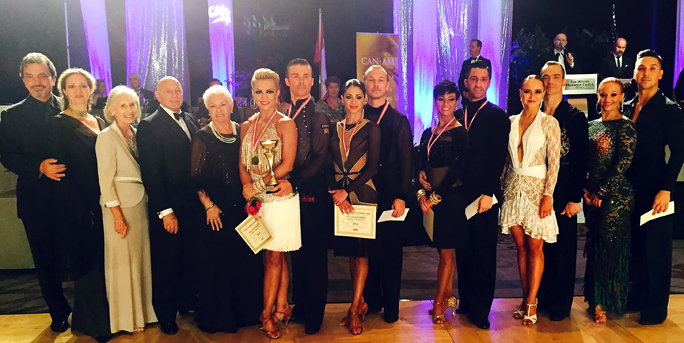 The Latin was a five couple final and here the top three couples were top of the line. The winners in every dance were Nikolay Voronovich & Maria Nikolishina. Second overall were Kamil Studenny & Anna Pelypenko who tied for second in the cha cha with Jean Philippe Milot & Lorance Bolduc, placed third in the jive and second 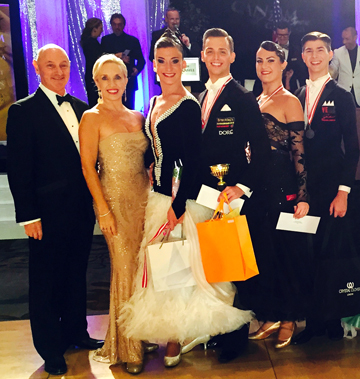 in the other three dances. Jean Philippe & Lorance were third overall and placed third in three dances, second in the jive and tied for second in the cha cha. In fourth place were Ilya Maletin & Polina Maier and fifth went to Steve Forrest & Bianca Izzo.

The Amateur Ballroom event was also excellent with two very high quality couples fighting for the top spot, James Cutler & Virginia Primeau and Florin Vlad & Natalia Linda O’Connor. In the end every dance went to James & Virginia leaving all seconds to Florin & Natalia.  To us both couples were excellent but it was also clear to the trained eye that James & Virginia looked a little more experienced and their skill easier to read and understand. Third overall were 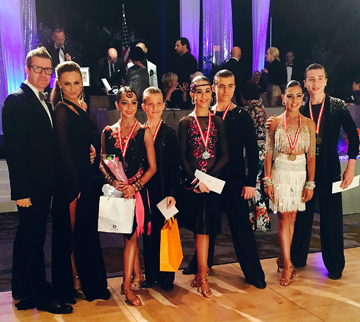 The Junior Latin event was only a three couple run but the couples were all of a good level with huge potential. Danny Zhelasko & Emma Gladubakh placed first in four dances and second in the cha cha. First in this dance and second on the other four dances went to Samuel Hakobian & Sabrina Le. Third in all dances were Ryan Tzanko & Nicole Lerman.

The evening ended with a show “Dancing Beyond the Stars” featuring both amateur and professional dancers.  Our favorite number tonight was by James Cutler & Virginia Primeau who danced a clever routine to “Me and my Shadow.”  The show was produced by Wendy Johnson and as always featured those of the judges with the “gumption” to also perform at the end.

Last night we saw the first professional semifinal ever in the Pro Rhythm at Can Am Gala.  Perhaps this is a sign that the USA is finally taking note of this elegant competition north of the border in Toronto! 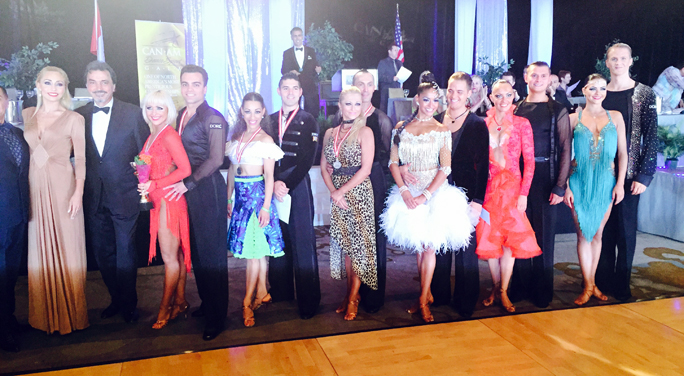 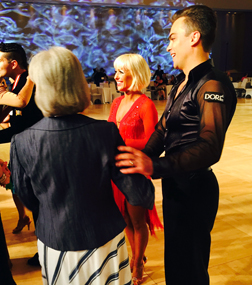 d USA dominated this event.  Winners tonight were Aaron & Iryna DeSoto and they won all dances with their action-packed dancing.  2nd in all dances were Matt Hauer & Lauren Schelfhaudt.  We thought this was a closer race than the scores indicated.  3rd went to Andrei Svirydzenka & Yuliya Zubova, 3,3,4,3,4.  We felt they were also very much in the mix with the top 2.  The only Canadian couple to make the final placed 4th, Boris Vdovine & Patricia Esty 5,4,3,4,3.  5th were Viktor Tkachenko & Yuliya Lukina 6,5,5,5,6 and 6th Kosta Trifunovic & Domante Padlekaite 4,6,6,6,5. 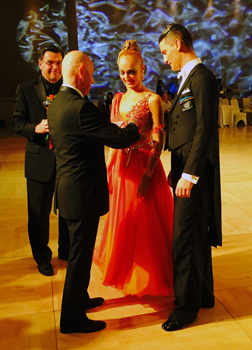 anada got their revenge in the Open Ballroom with 4 of the 5 finalists.  Anton Lebedev & Anna Borshch won all dances ahead of fellow Ontarinans, Richard Tonizzo & Claire Hansen who were 2nd in all.  All the way from Germany, Volker Schmidt & Ellen Jonas took 3rd in all dances.  2 couples from Quebec closed the final, Steve Forrest & Bianca Izzo 4,4,4,4,4 and Mathieu Casavant & Melanie Martin 5,5,5,5,5. 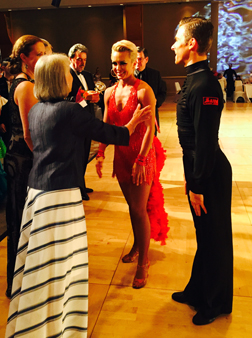 There was also an upbeat Open Amateur Latin but sadly it attracted no entries from the USA.  Adam Hathazi & Morgana Lakatos-Hayward were in great form and took all dances.  Christopher Navas & Alina Totska, a new partnership we believe) were 2nd in all.  All couples finished in the same position in all dances.  3rd Marco Tremblay Brosseau & Alice Muraru, 4th Sandu Babira & Alisa Dombrovsky, 5th Simeon & Dimitrina Vassilev, 6th Joey De Angelis & Elise Magliocchetti.

weather this year in Toronto is perfect!  The downtoen location, Westin Harbour Castle, is delightful as it sits right on the bank of the Lake with nice walks past the boats and plenty of activity.

Stay tuned for more from Can Am tomorrow!