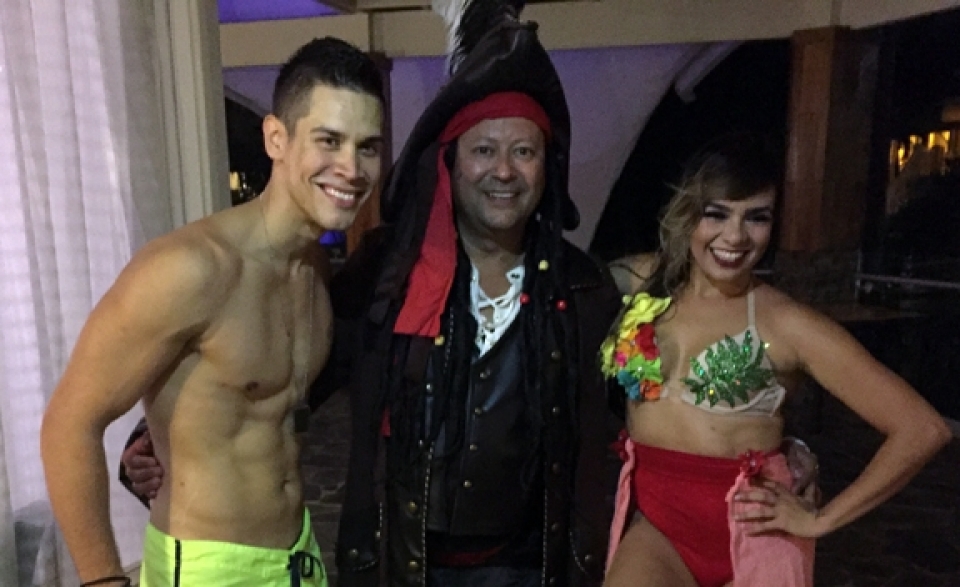 All 1’s for Nazar & Irina on Last Night!

On the last night Nazar Norov & Irina Kudryashova won the Pro Rhythm and also the overall prize in the Star Rhythm Tour, round 4.

In the freestyle section they won all dances with 11 first place marks from the judges – perfect scores.  2nd tonight, again in both the freestyle and in 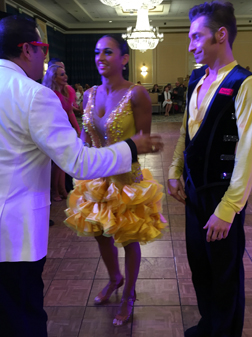 the overall Star Tour, were Mikhail Vlasov & Vanda Polakova.  They had the majority of 2nd places in all dances.  3rd in the freestyle, but choosing not to compete in the solo segment of the Star Tour, were Danas Jaksevicious & Yuki Haraguchi.  Aaron & Iryna DeSotto were 4th in the freestyle, again in all dances and 3rd in the overall Star Tour.  Overall, this moves Aaron & Iryna up to 2nd spot in the cumulative Star Tour totals.  Check out the standings at here.  5th in the freestyle, but also not competing in the solo were Roman Malkhasyan & Viktoriya Kleyman.  They were 5th in all dances.  6th in all, but also not dancing a solo were Eddie Rivera & Meghan McNash.

The 4th couple to dance in the solo segment as the wildcard audience selection was Daniel Lee Tran & Kimberly Taylor.  They placed 4th overall but were the audience favorite in the text and online voting. 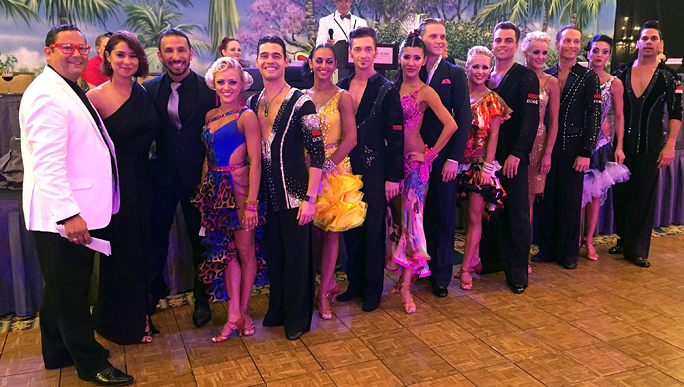 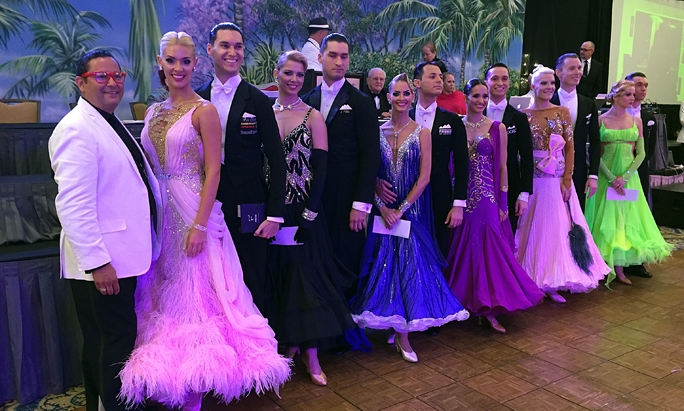 There was a strong straight final in the Professional Ballroom.  The winners were Alexander Voskalchuk & Veronica Egorova. They had the easy majority of 1st place marks, losing a total of only 7 out of 55.  Also clearly second in all dances were Andrey Begunov & Anna Demidova.  Oscar Pedrinelli & Lenka Kvalcikova were 4th in all.  Youriy Nartov & Sarika Hudson had a good week, winning the RS and then placing 4th in all dances tonight.  5th with 5,6,5,5,6 were Martin & Liene Reinbold and 6th were Stefano DiBrino & Bianka Zubrowska 6,5,6,6,5. 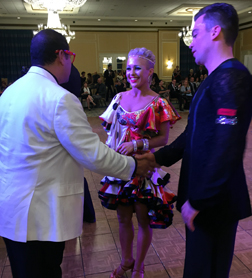 ly 2 couples contested the World Professional Salsa and the title went to Aaron & Iryna Desotto over Eddie Rivera & Meghan McNash.  They won by 9 first places to 2.

The next morning everyone on the extended package took to the high seas for a catamaran trip to a secluded beach and of course the annual Haile Berry contest.  This year's winner was Virginia Cocker.

For a quick taste of this year's Caribbean Dancesport click here.

It’s Smooth, but oh so Rhythmical!

Last night was mostly about the Professional Smooth – but we saw those Smooth “rhythms” coming through – after all we are in Puerto Rico! 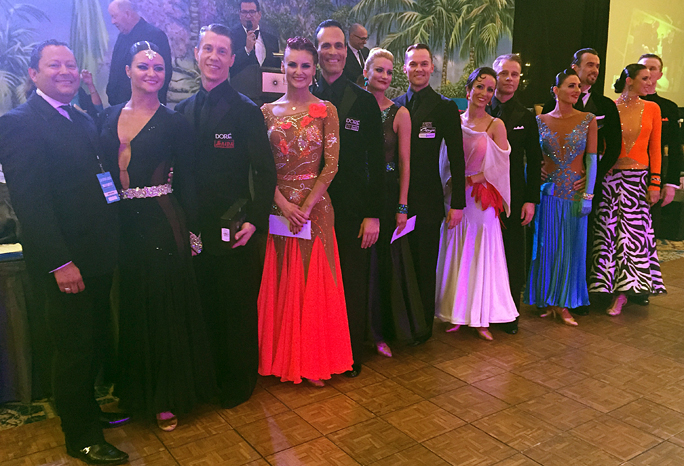 US finalists were in attendance and they took the top 3 places.  US Champs, Peter & Alexandra Perzhu were the easy winners taking almost every available first place.  In fact they lost exactly 1 first place in each dance.  With 2,2,2,3, Mazen Hamza & Izabella Jundzill were 2nd.  They had the most “2nd or better” scores in all dances but had the majority only in waltz and tango.  A couple of judges were scoring them in the lower half of the final and this lost them the Viennese Waltz.  Travis & Jaimee Tuft took the 3rd place with 3,3,3,2.  Evgeny Malko & Anna Shabazyan were 4th in all dances, Jean Paul & Lana Rossi were 5th in all and Dave Hannigan & Maggie Toth were 6th.  Several onlookers claimed that this was the best many of these couples had danced recently.  Perhaps it was the Puerto Rican sunshine?  Or the rum? 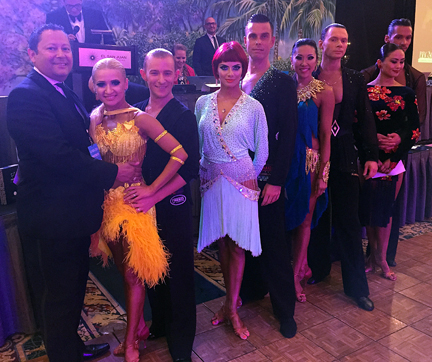 Professional Latin was a straight final of 4 couples and again the winners were clear.  Dmitry Nikishkin & Olena Shvets won all dances.  They took the jive with perfect scores and lost only 1 first place in each of the other 4 dances.  With the majority of “2nd or better” in all dances Jake Davies & Alona Kalinina were comfortably 2nd.   Samba was the closest.  Andre Strinadko & Ching Kao were 3rd in all dances and Aleksander Vukosavljevic & Jessica Li were 4th. 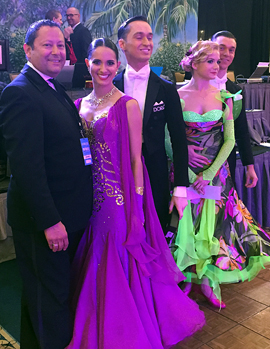 There was a semifinal in the Pro RS Rhythm and the win went to US 9-Dance Champions, Jean Paul & Lana Rossi.  They won all dances with the majority of 1st places.  Runners-up were Roman Malkhasyan & Viktoriya Kleyman.  We liked their dancing a lot tonight, but they had the majority of “2nd or better” scores in only cha cha and swing.  3rd went to Eddie Rivera & Meghan McNash, again in all dances and they also were on form tonight.  With 4th in every dance Christopher Wayne & Juanita Semanekova took that place.  Romney & Brooke Reyes were 5th 6,5,5,5,5 and Jeremy Babagay & Carolyn Barreno were 6th 5,6,6,6,6. 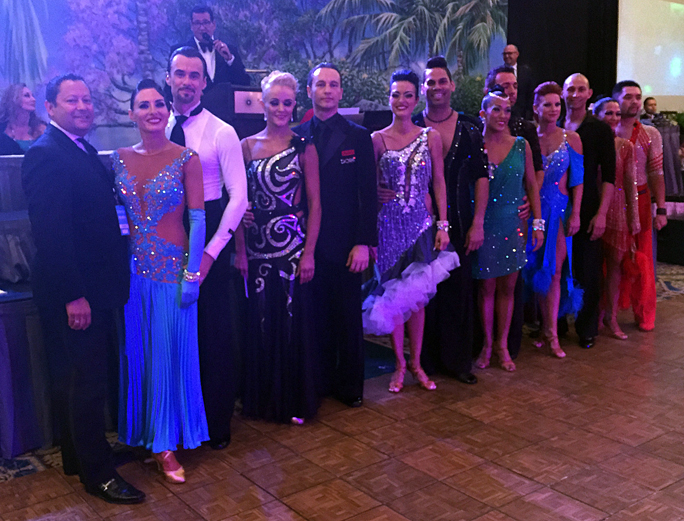 The pro-ams danced Rhythm all day today and the Open Scholarships produced some strong finals. 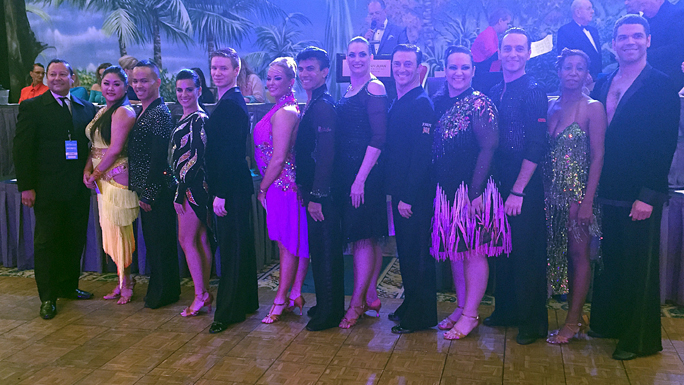 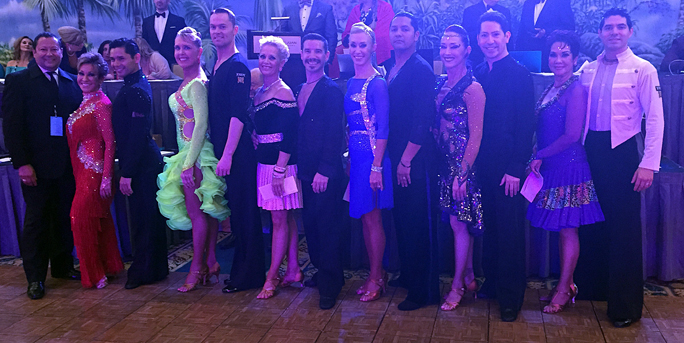 As usual the lobby of the El San Juan was hopping late into the night with live salsa music.  We think everyone made it to this morning's 9:30 AM start.  Including the judges!

Stay tuned today (Saturday) for more from the Caribbean Dancesport including tonight’s livecast of leg 4 of the Star Rhythm Tour.  You can watch it live and cast your  votes here!  Start time is 9:00 PM (remember Puerto Rico is one hour ahead of EST)

The Busiest Day at Caribbean

This year’s Caribbean Dancesport is the largest in its history, so yesterday was a very busy with the pro-ams dancing 2 styles, Smooth and Latin.  We also saw the first of the professional heats.

The Open Scholarships in the Smooth were very hotly contested and produced some interesting results.  It was a great day for Sophia D’Angelo w/ Ilya Reyzin as she won both the B and C open Scholarships.  In the B Sophia won all 4 dances.  2nd in all was Kako Matsumoto w/ Eric Pali and 3rd was Miller w/ Daniel Vasco 3,3,3,4. 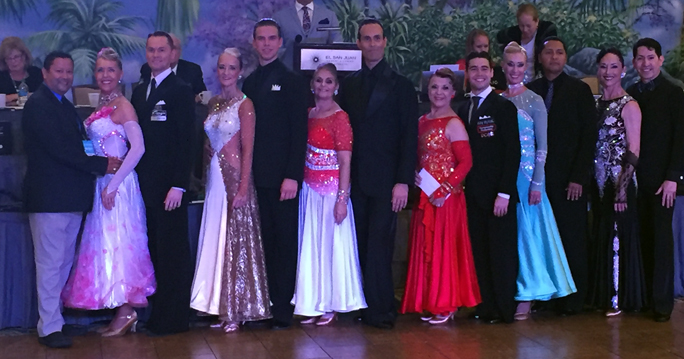 2nd in the A was Lauren Lapoint w/ Louis Bar and 3rd was ???? Alejandro w/ Roman Malkhasyan.  In the B, Svyatets w/ Vukosavljevic was 2nd and Porter w/ Wlodarski was 3rd.  2nd in the C went to Mercer w/ Roman Malkhasyan and 3rd to Sue Gershowitz w/ Nikolai Pilipenchuk.  Pat Bodin w/ Antonio Conde was 2nd in the C1 and Allison Allan w/ David Alvarez was 3rd. 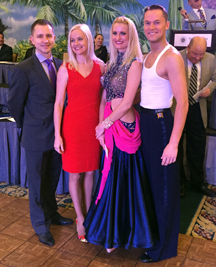 fter cancelations, there was only one entry in the Pro Showdance.  Travis & Jaimee Tuft performed a routine we have never seen before to quickstep music.  It was very impressive. 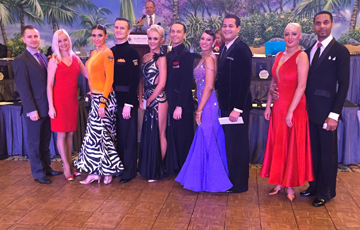 the Pro Rising Star we thought it was a close race for 1st place, but on paper Dave Hannigan & Maggie Toth were fairly clear placing 1,1,1,1T.  However, they had the majority of 1st places in only the waltz.  2nd with 2,2,2,1T were Roman Malkhasyan & Viktoriya Kleyman.  3rd in all dances went to Aaron Talbert & Angela Maughan and 4th to Webert & Natalia Benoit. 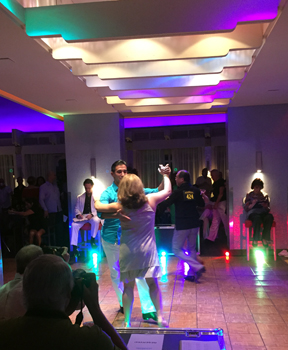 rty On at Caribbean!

aribbean Dancesport 2015 began last night with perhaps the longest session of purely “nightclub” dances we have ever seen at a competition.  How often do you see semfinals in bachata or salsa?

It was danced in the smaller La Terazza ballroom to give it a more intimate feel.  There were surprise performances by Puerto Rican drummers and singers, (see them here), gogo dancers and lets not forget our Damsels in distress and Captain Morgan!

The climax of the night was the Open Caribbean Mix divisions – 3-dance events of Salsa, Bachata & Merengue.  The winners were Linda Susserman w/ Melbin de la Cruz in the B, Judy Raines w/ Slawek Roszak in the C and Margie Juanillo w/ Mat Hauer in the C1. 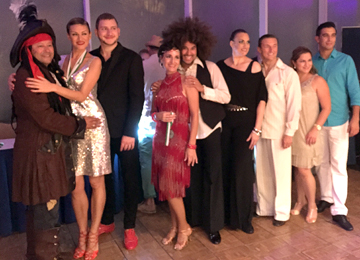 The A division was won by Elena Shitskaya w/ Dmitry Musikinov all the way from Russia. This pro-am duo won their trip to Caribbean Dancesport by qualifying in the Caribbean Mix competition at the Champions Ball in Moscow earlier this year.

Today we begin the pro-am Smooth in the main ballroom.