The Psychology of Dance of Max Arkhipenko 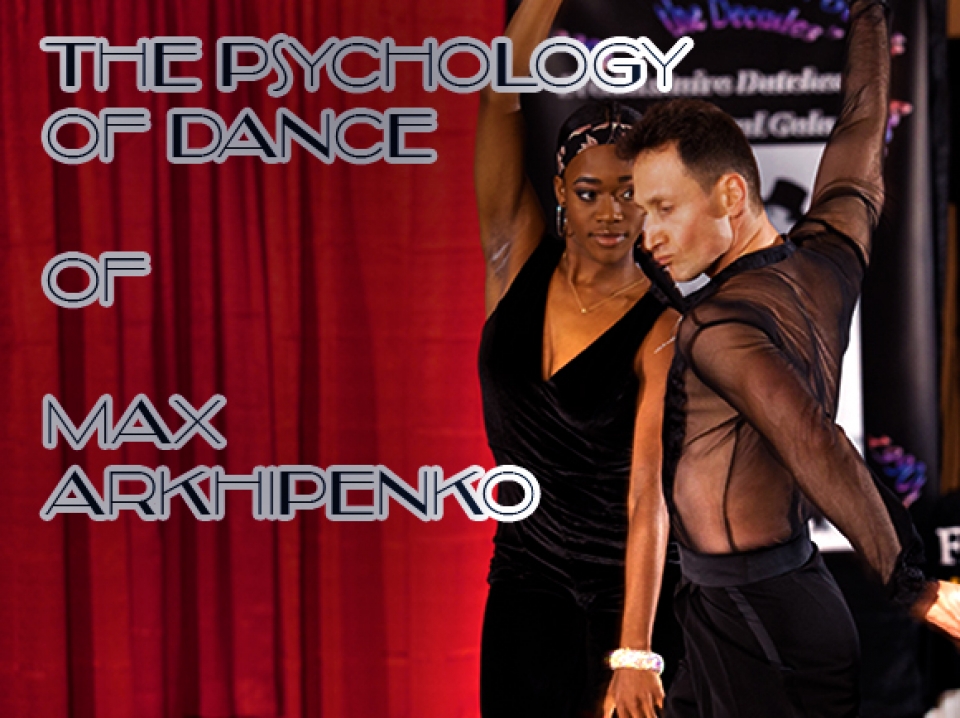 The Psychology of Dance of Max Arkhipenko

For the past year or so, Max Arkhipenko has been a contributing columnist to Dance Beat. His articles on the Psychology of Dance have proved popular with the dance audience.

Here is a little more about the man and his ideas.

View the embedded image gallery online at:
http://dancebeat.com/m-db-articles-en/item/1736-psych-arkhipenko#sigProId2a03a433d1
We all, to the best of our ability, strive to contribute to what we love more than anything else - in ballroom dancing. We train many hours a day and train others, publish dance textbooks and magazines, invent new figures and create choreography. But there is a completely new field of activity for dance developers. This is Psychology of Dance.
Basically there are two points of view and ways to perceive ballroom dancing as social phenomenon. The first defines it as sport, the second considers it as art. And only a few notice that in this kind of activity there is another component, without which the joint dancing of two people is not only impossible, but also deprived of its charm and meaning. For Max Arkhipenko, Ballroom Dancing is human relationships in all its psychological diversity.

However, he did not immediately come to this vision of dance. The initial reason for his interest in the psychology of dance was that he began his dance career quite late, at 21. In Russia (where he comes from) athletes very often end their sports career at this age. As a novice dancer, he had to compete with superbly trained professionals. Needless to say, it was extremely stressful. At some point, he realized that it was impossible to succeed in dancing without defeating his own fears and solving his psychological problems. By this time, he had a Ph.D. and a belief that he could find answers to his questions in the field of science. In 2012 as a result of cooperation with the leading dancesport magazine of Russia "Stars over the Parquet", a series of articles on applied psychology of dance was published. It should also be said that, 8 years before in 2004, Max Arkhipenko had published a textbook on ballroom dancing, designed for dance teachers and self-learners, the goal of which was not only to represent complex theoretical material in a more accessible form, but also to comprehend dancesport as a social phenomenon of modern of life. Before moving to the United States, Max spent nearly two years teaching professional dancers in China. Meeting with the unique culture of this country and a completely different (in comparison with Western culture) perception of dance (especially sports dance) gave a new impulse to his psychological research.

View the embedded image gallery online at:
http://dancebeat.com/m-db-articles-en/item/1736-psych-arkhipenko#sigProIdca4ab7b063
In the USA, Max discovered a new, unknown world - the world of social ballroom dancing. This greatly expanded his range of scientific interests, since the training of adults, formed as a person, people requires solving a lot more psychological issues than training young athletes in Russia and China, whose psychological personality structure has not yet been formed, which means they are essentially still a blank page. The difficulty of the current state of the psychology of ballroom dancing is due to the fact that there are only 5 people in the world who are seriously developing this scientific field (Rudolf Vermeij in Australia, Maximiliaan Winkelhuis in the Netherlands, Nina Rubstein in Russia and Max Arkhipenko in USA).
View the embedded image gallery online at:
http://dancebeat.com/m-db-articles-en/item/1736-psych-arkhipenko#sigProId37e3b1b8d1
The inevitable question of the relevance and efficiency of applied psychology of dance can be answered by the fact that Rudolf Vermeij was the favorite coach of such outstanding dancers as Klaus Kongsdal and Viktoria Franova (the World IDSF Amateur Latin vice-champions), Peter and Kristina Stokkebroe (the World IDSF Amateur Latin Champions) and, of course, the legendary Michael Malitowski and Joanna Leunis (the WDC World Professional Latin Champions). The range of problems in the applied psychology of dance includes increasing endurance to competitive stress, relationships in a couple, personal self-expression, psychological techniques for dance teachers, et cetera. We are extremely pleased to state that Max Arkhipenko is a regular contributor to our magazine, sharing his latest discoveries in the area of the psychology of dance. He is a member of the American Psychological Association (Sport, Exercise & Performance Psychology), PhD, dance teacher and professional dancer. His current goal is to create a system of psychological methods that will enhance and emotionally enrich the dance, both amateurs and professionals.